“Captain’s log. Stardate 031118. I have been lost in cyberspace for over four hours and rescue seems unlikely. The wall lights I’ve been trying to buy for the stairs and landing have eluded me for almost an entire calendar year yet still I search for them, typing every known combination of the words “brass”, “glass”, “wall” and “light” into Google and (in one case) getting to results page 2,013 before managing to pull myself out of the internet black hole. Commander AMR has proved himself useless in remembering to beam me back up to reality, lounging in his big leather chair on the bridge of the Starship Enterprise, watching Wheeler Dealers on the control panel.”

Crikey, I don’t know what I’ve wasted more time doing, this evening; searching for the aforementioned wall lights or doing Virtual 3D tours of the Starship Enterprise trying to find out what that main room is called that they all sit in. This is the story of my life at the moment – I have so much to do, but keep finding really insignificant projects to throw myself into. Yesterday I spent an hour looking at holiday photos that someone on Instagram had put up. I didn’t know this person, they just appeared on the home page and had a cute baby and before I could stop myself, I’d watched the birth video, the wedding video and found out (via Google) that they had been married twice before and their last husband had been bankrupt.

If I sound relatively chirpy, then let me tell you: I am. I realise that I’ll jinx myself here, because that always happens whenever I write something positive, but I’m feeling properly buoyant and cheerful for the first time in ages.  Usually I feel like that when I’m on top of my workload, but I actually think that this time it’s because I’m very much not, but I’ve reached a little happy balance where I just do what I can and then don’t stress about it the rest of the time. You can only do what you can fit into the hours you’re given and I’ve spent far too much time worrying, over the years, that there aren’t enough hours in the day. What a ridiculous thing to worry about! You may as well worry about the fact that there are seasons. Or that the sea exists. 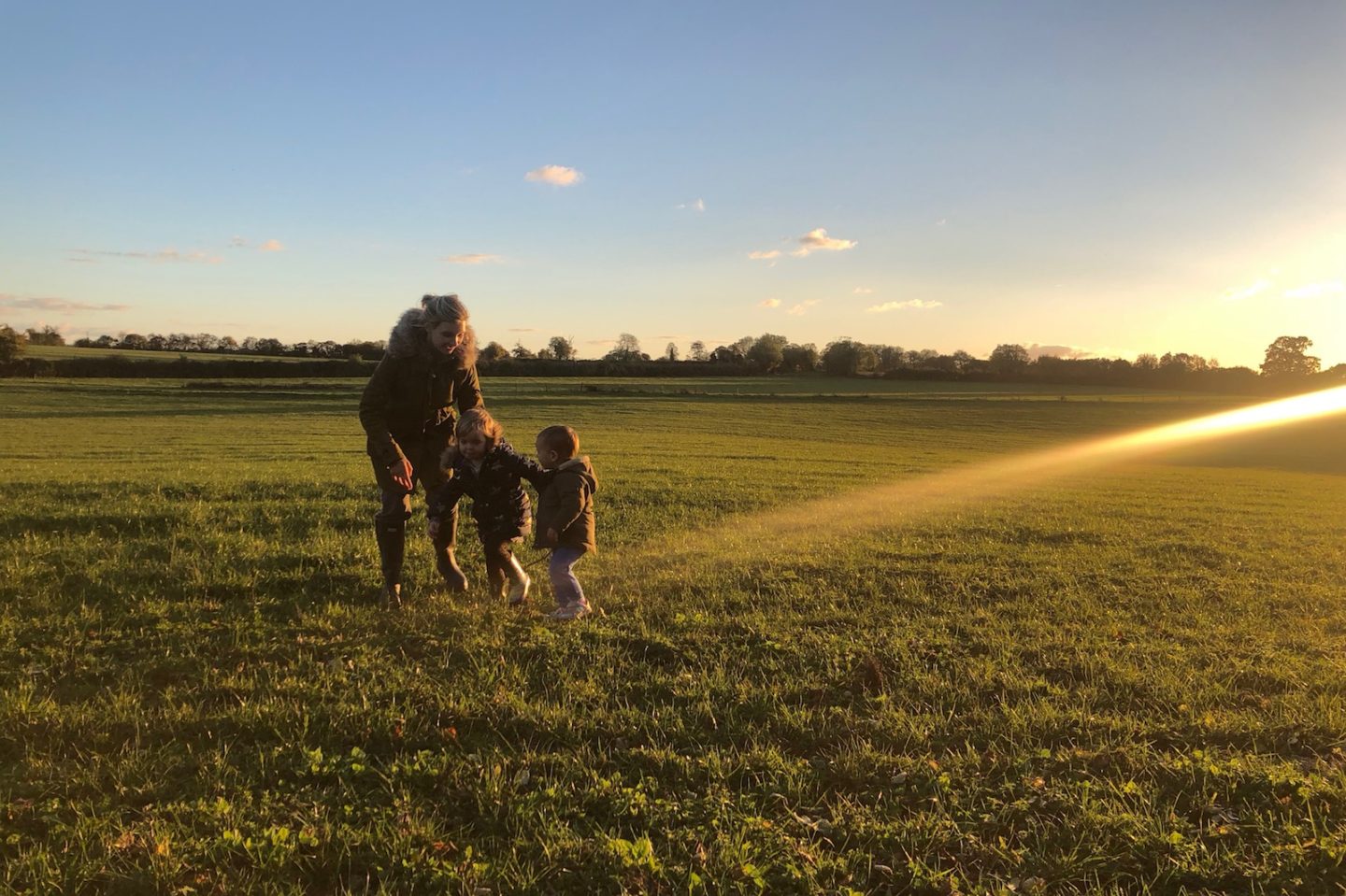 Also, Ted (21 months old today) and Angelica (3 years and 4 months) are an absolute riot and I’m really enjoying spending time with them in a fully present way, when I’m not working, rather than attempting to shoehorn work in at every spare moment. 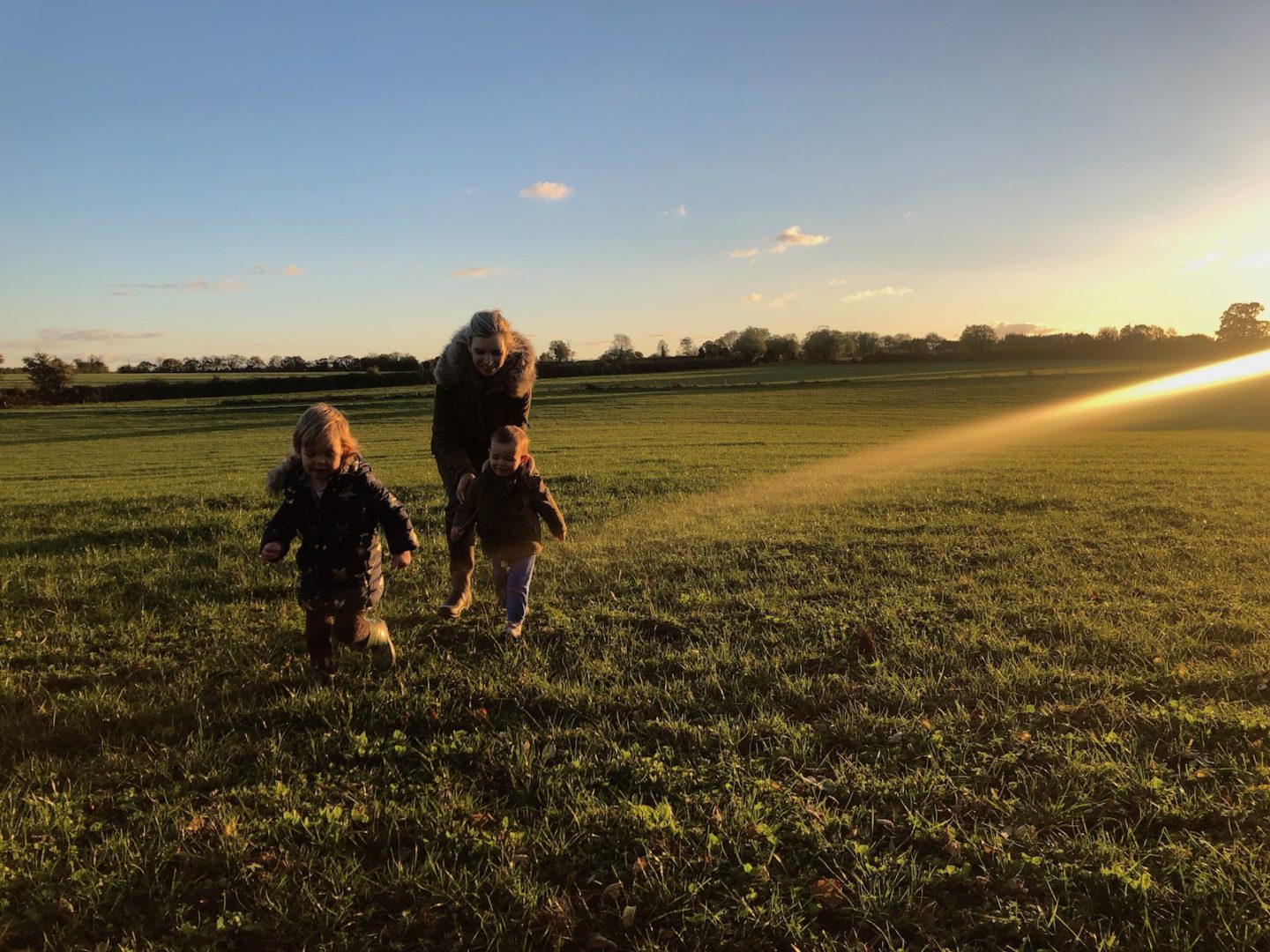 Don’t get me wrong, I’m typing this on a Saturday night instead of watching Strictly and tomorrow (video upload day) I’ll have to edit film during Ted’s nap, with Angelica sat beside me watching Octonauts, but I’m really trying hard not to be constantly looking at my phone when I’m with them, or wondering when my next opportunity will be to quickly send off a few emails. 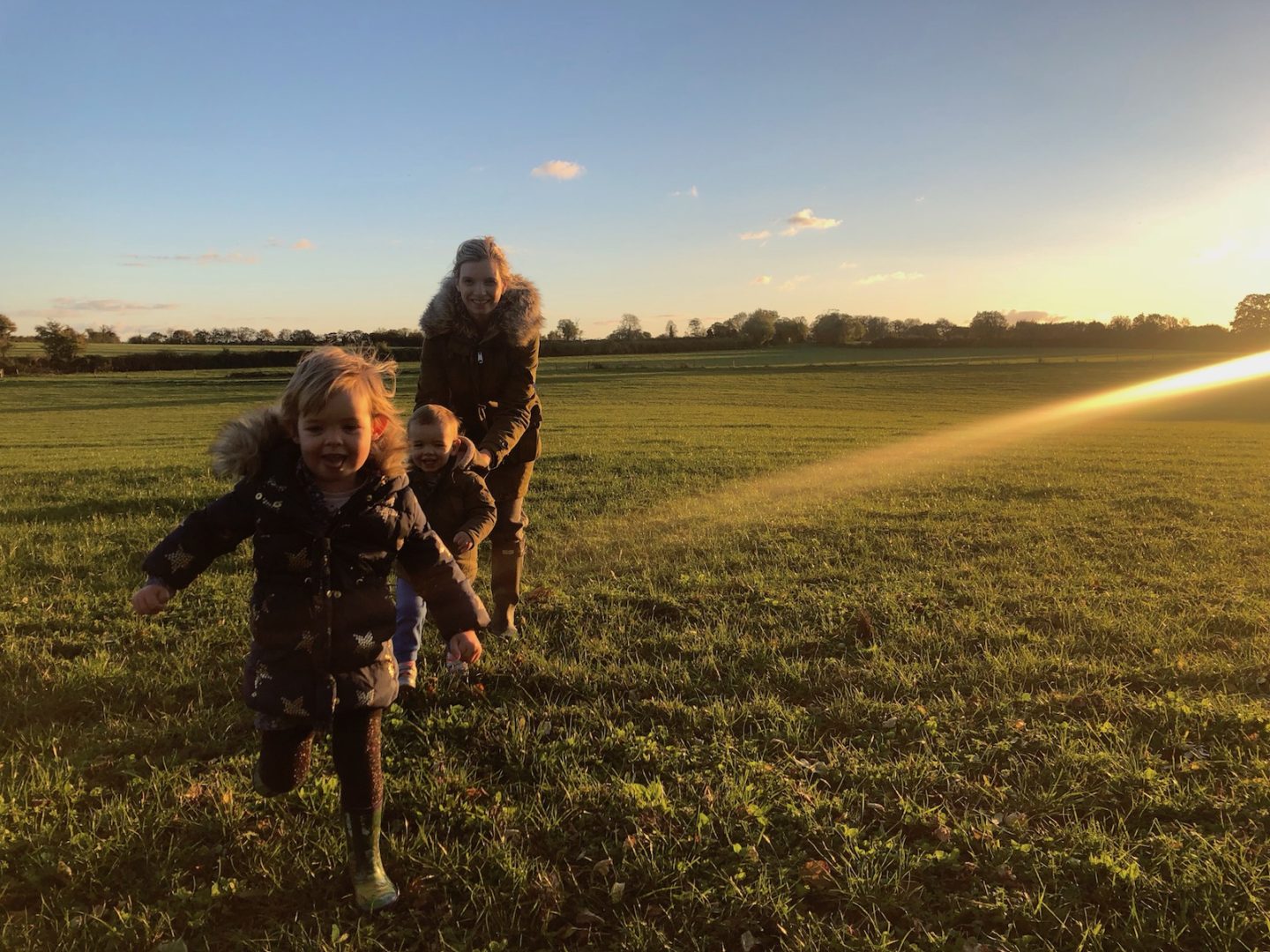 It means that I have to work like an absolute maniac on the two/three nanny days and try not to get distracted (I can easily kill half a day doing non-essential “admin”, which includes looking at fantasy holidays and reading cashmere jumper reviews on Boden) but I like the satisfaction of having more of a structured work week. Even if it’s the shortest work week known to man. But includes all of the other evenings.

Let’s face it: nothing has changed. I’m just in a better mood. 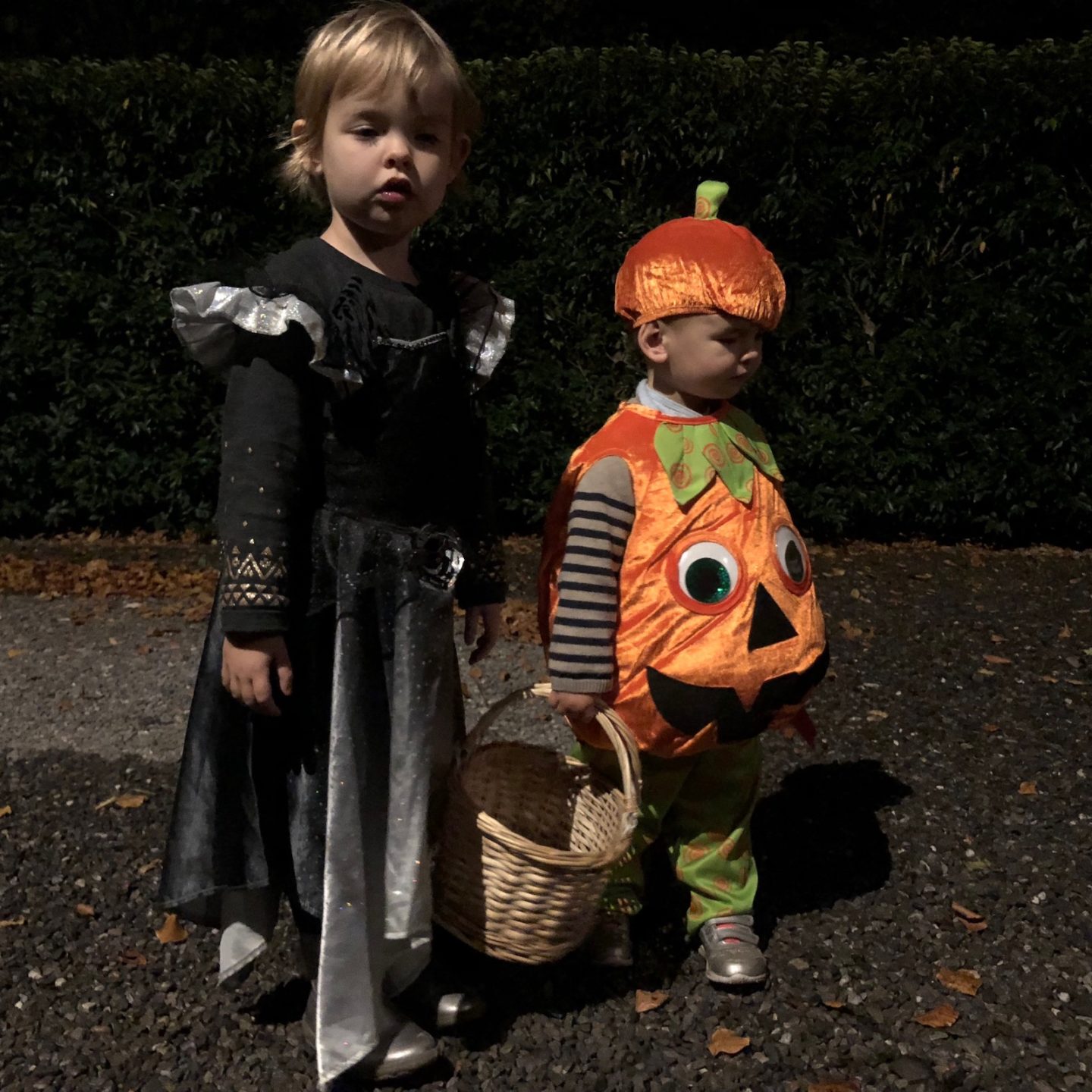 We took Ted and Angelica trick or treating last week, for Halloween. (Obviously. When else would you take them? Thankfully it’s not one of those things like carol singing that can be legitimately performed on more than one day of the year.)

I was never allowed to trick or treat as a child, I don’t think. My sister and brother have been wracking their brains on this one too, as none of us can actually remember whether we went or not. I recall one of our childhood friends sticking prosthetic scars all over his face with glue and then pulling all of his eyebrow hairs out by accident, I also remember how badly that fake blood from the eighties used to stain your skin (it was basically red food colouring mixed with a bit of cornflour, I think) but I’m pretty sure we never knocked on doors. 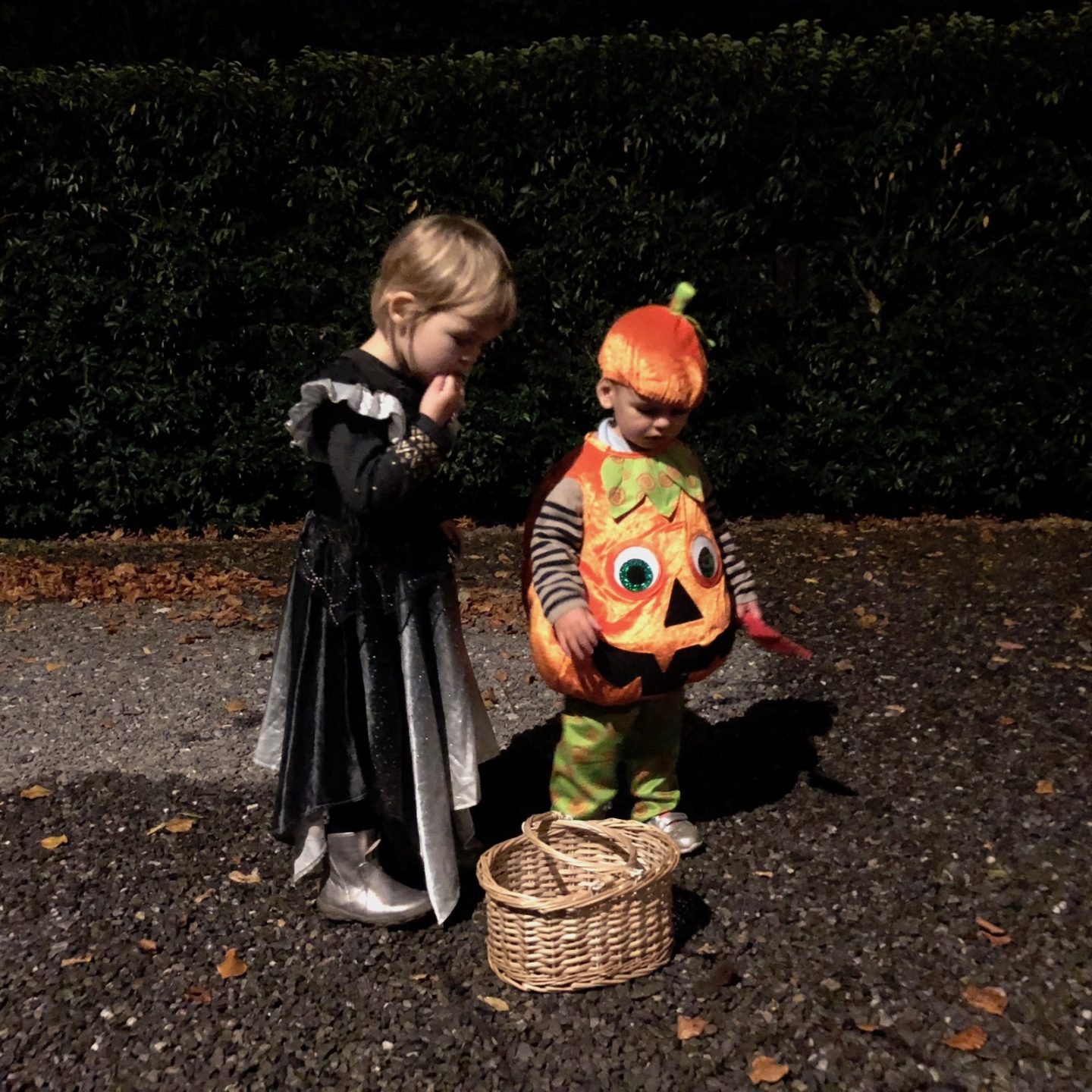 It’s an odd concept, isn’t it? Trick or treating? I know that it’s huge in the states but I think it’s only just picked up momentum in the UK over the past decade or so. Certainly in the eighties and nineties it wasn’t a big thing. To be quite honest, it’s amazing that it’s caught on at all, because knocking on the door of someone you don’t know, after 6pm, in the winter, asking to be given something, for free, is just about the most un-British thing you could ever hope to conjure up. Mr AMR and I used to turn out all the lights on Halloween, and if someone knocked on the door we’d be there wrestling the dog to the floor so that he didn’t bark and trying not to move the curtains in the process.

Even if someone is in the spirit of things and has their pumpkin lit up outside (excellent idea, that, by the way) you can tell that they don’t really want to open the door because a) people can see into your hallway and the hallway is always where you dump all of your crap and b) opening the front door lets all of the heat out. And, as you’ll probably know, keeping heat in the house is a national obsession.

(“CLOSE THE BLOODY DOOR MAUREEN, WHAT THE HELL IS THE MATTER WITH YOU? MONEY DOESN’T GROW ON TREES YOU KNOW!”)

As is knowing exactly how to heat your house in the first place. It’s an art. You must know how to turn that dial on your thermostat to exactly the right point – you don’t want the radiators coming on too soon, you need them to be kicking in when the cold’s just beginning to bite. You want them gurgling into life just as you’re wondering whether you should stick a cardigan on over your jumper. And so men and women all over Britain are standing on their landings, fine-tuning their thermostats, turning that little dial around, their ears cocked and listening for the clicks, looking for all the world like expert safe breakers in the vaults of a Swiss bank. 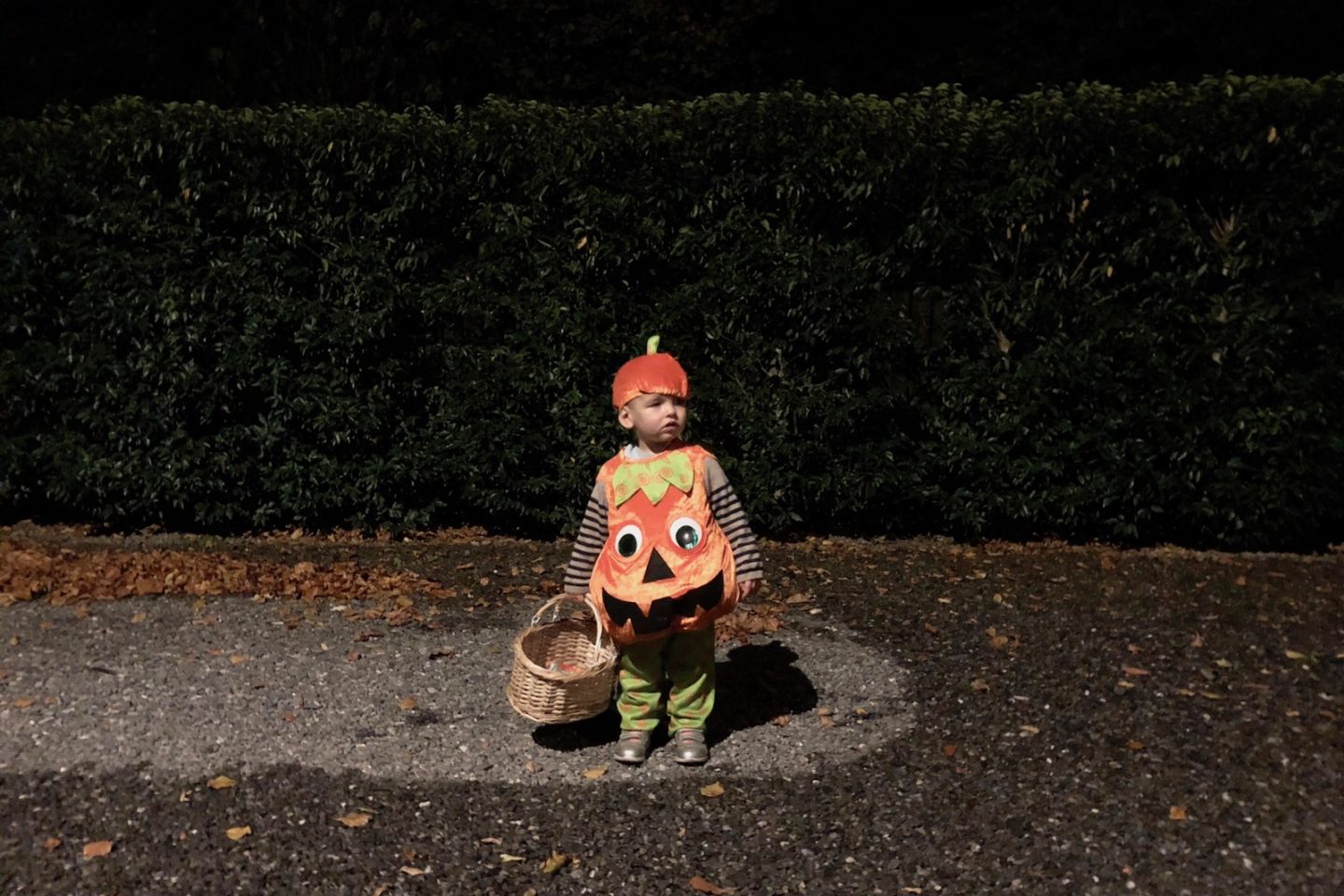 But anyway, off we went and my heart almost burst with pride at little Ted waddling along in his padded pumpkin outfit. He can’t even speak properly yet but he said “thank you” every time he was given a sweet for his basket “OO OOOOOO!” and then waved goodbye as each house closed their door, shovel in one hand, basket in the other. Angelica was more canny than Ted and focused her energies on forcing the sweets into her mouth at the door before I could get to her. Amazingly she went to bed at the right time, despite consuming more sugar in the hour-long period than she’d probably had in all of her three and a quarter years previously.

I ate half a bag of Haribo Tangfastics that I confiscated because…I wanted them. It was a low point, diet-wise, because I’ve been doing really well with my sugar intake. Still just the one can of Coke (regular, eighty-nine thousand grams of sugar) per week and two mint Magnum ice creams. One on a Friday and the other on a Saturday. I’ve also stopped having two crumpets for breakfast every morning and have switched to porridge, much to Mr AMR’s dismay. I always forget to wash the pan and the leftovers seem to set like concrete.

Ted’s words this month: “bum-bum” (that’s my fault, I thought it would be funny), “Gaga” (Angelica), “andad” (Grandad), “star”, “hat” and “thank you” (oo oooo). He’s developing a wicked sense of humour, it’s great. In fact, both of them are at a brilliant stage where they make each other laugh, but they both also understand teasing and enjoy being chased and playing hide and seek and pretending to be asleep. It’s loads of fun, but I feel as though every new development is also tinged with sadness, because you realise how short the baby stage is. I mean it’s just gone, before you can even really get to grips with it. And then all of a sudden so is the toddler stage, and instead of a tiny tot who mixes up her words and goes to sleep sucking her thumb and twirling her hair, you have a little girl who makes judgemental faces when you say you’ve run out of milk and  who wants to choose her own outfits. 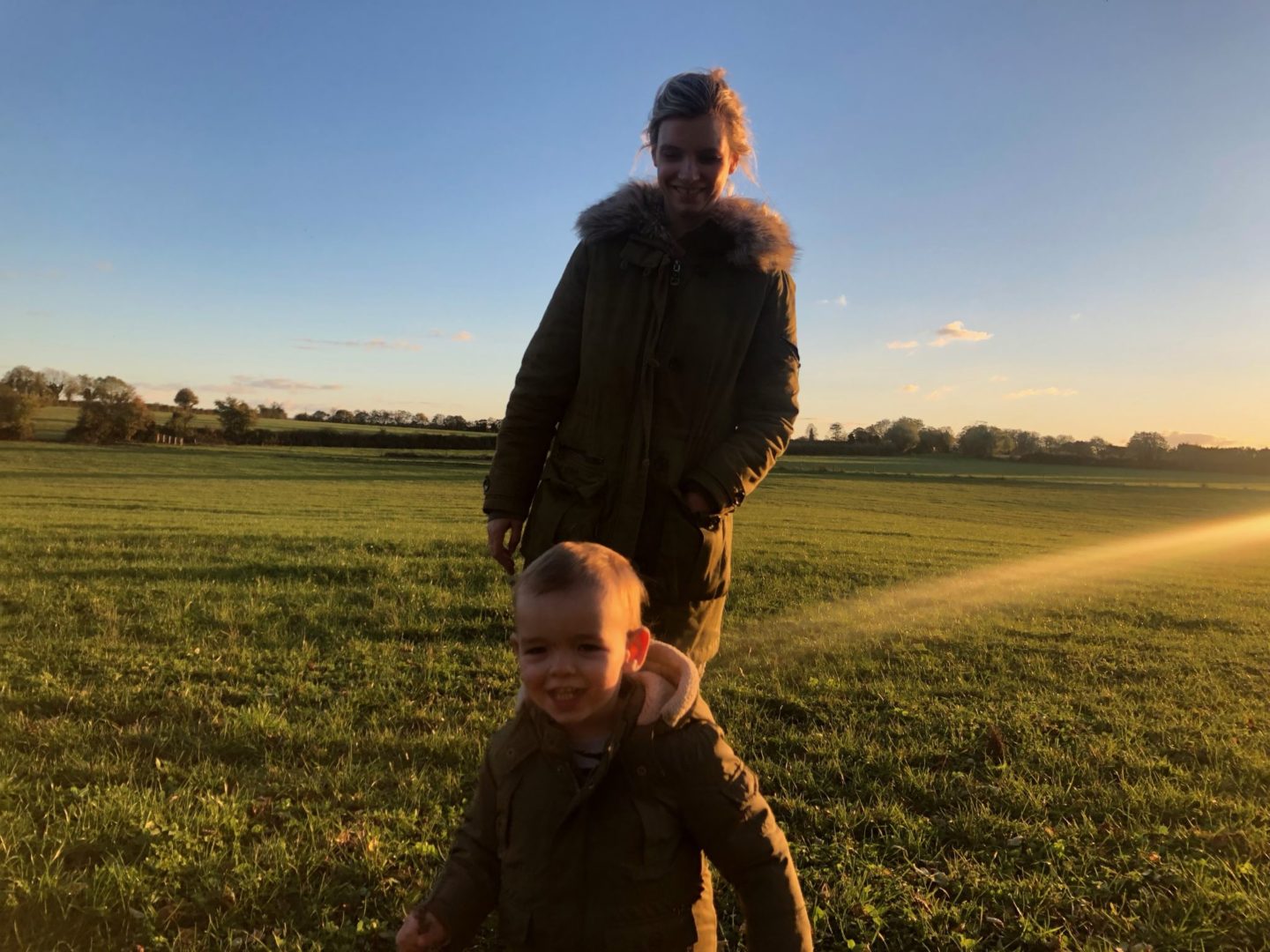 Only one grief side-swipe this month and that was on my Dad’s birthday, when Siri (the iPhone helper) reminded me to “call Dad for his birthday”. Well that took me by surprise, seeing as though I had just woken up. For a moment I thought yes, must do that, and then my brain kicked into gear and I remembered that Dad was dead. The worst thing, I think, about someone not being there anymore, is trying to come to terms with the fact that they are never coming back. It’s permanent. I’ll never ring him on his birthday again.

“Captain’s log. Stardate 031118. I remain in cyberspace at the mercy of the Klingons and also the advertising pop-ups that now follow me around however hard I try to escape them. The same glass globes with brass wall bracket haunt my every pageload – if I didn’t want them the first time they popped up then by now, on the seventy-fifth appearance, you can rest assured that I wish to blow the things to smithereens. Alas I am unarmed. If only Commander AMR would stop watching telly for ten seconds and ask Scotty to beam me up. But only a direct hit to the bridge would rouse the Commander from his horizontal viewing position. And so farewell friends, into the darkness. Another five hours on eBay awaits.”