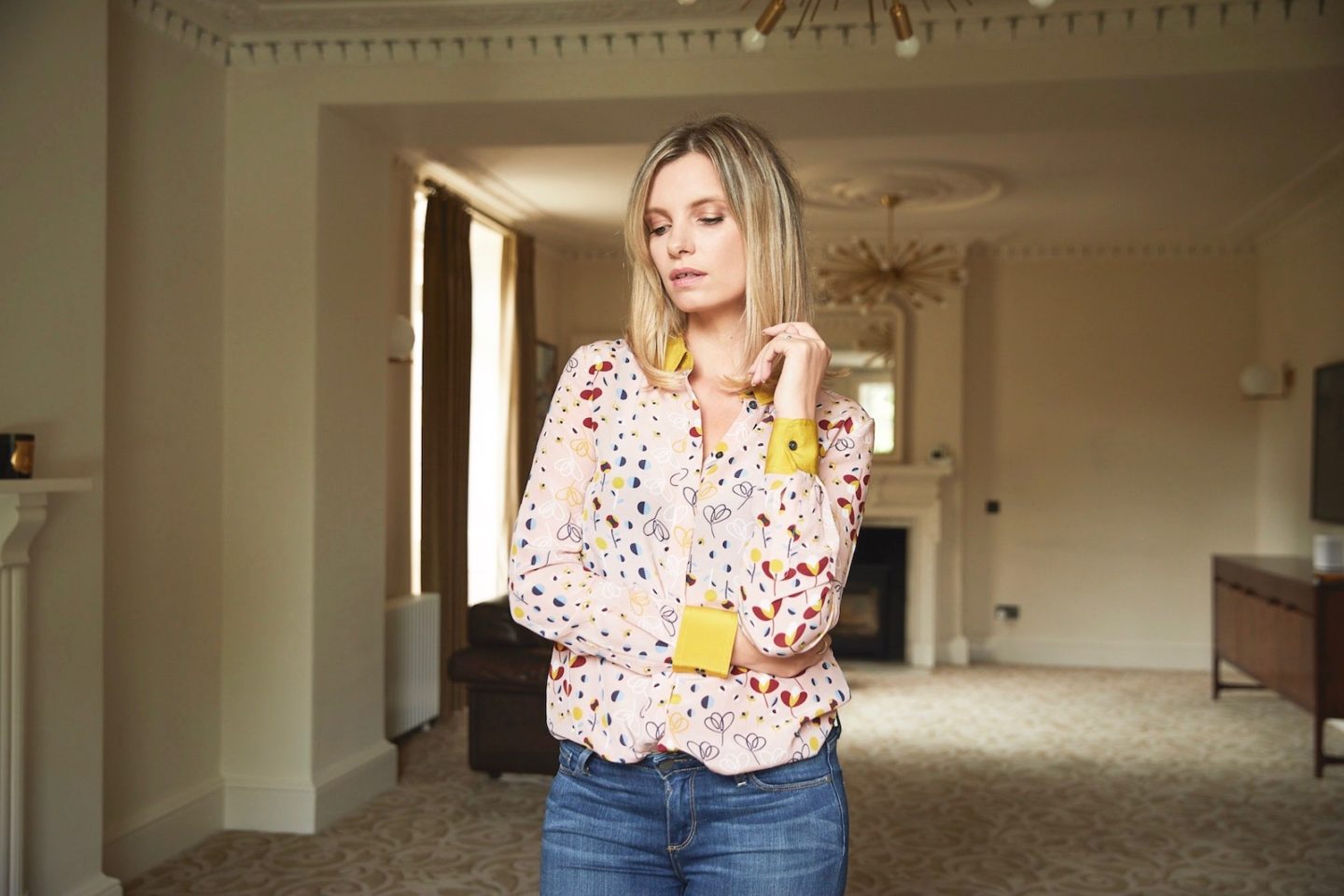 Here’s a pretty little autumn wardrobe update for you; a gorgeous silk shirt that’s cool enough to be worn now, at the tail end of the summer, but robust enough for layering underneath chunky cardigans and jumpers when the weather starts to get chilly. Some silk shirts can’t survive a layering mission – they’re just too flimsy and delicate and altogether too much of a faff – but this one from Boden* holds its own and doesn’t runkle up like a sheet of tissue paper. 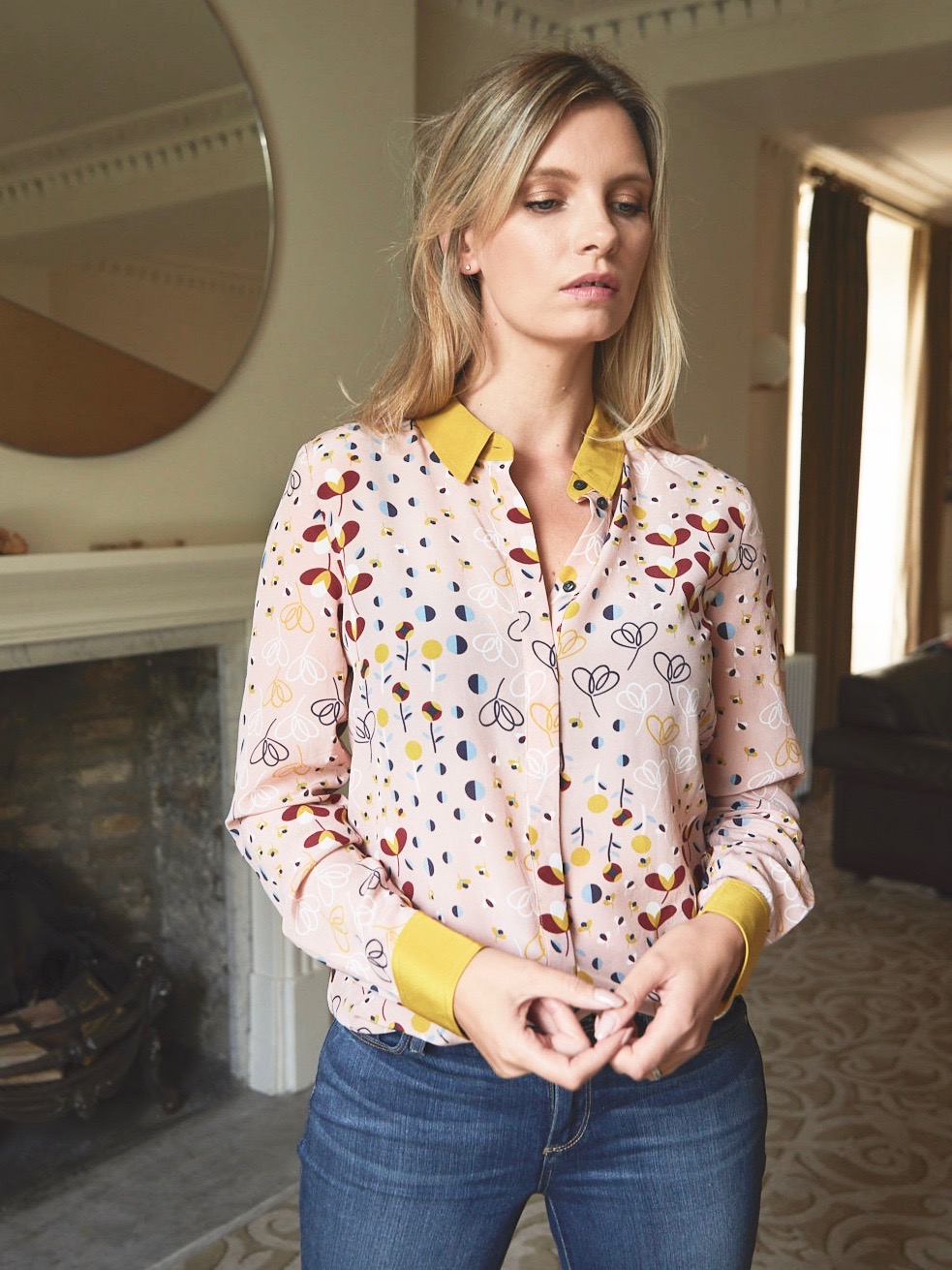 I think that the colour-block cuffs and collar help to make it a candidate for successful layering; that bright ochre sort of shade popping out over a plain grey cashmere jumper is just a delight. And then there’s the overall print, autumnal browns and yellows on a pretty pink background. It’s quite unusual, really, and I’ve had dozens of comments on it… 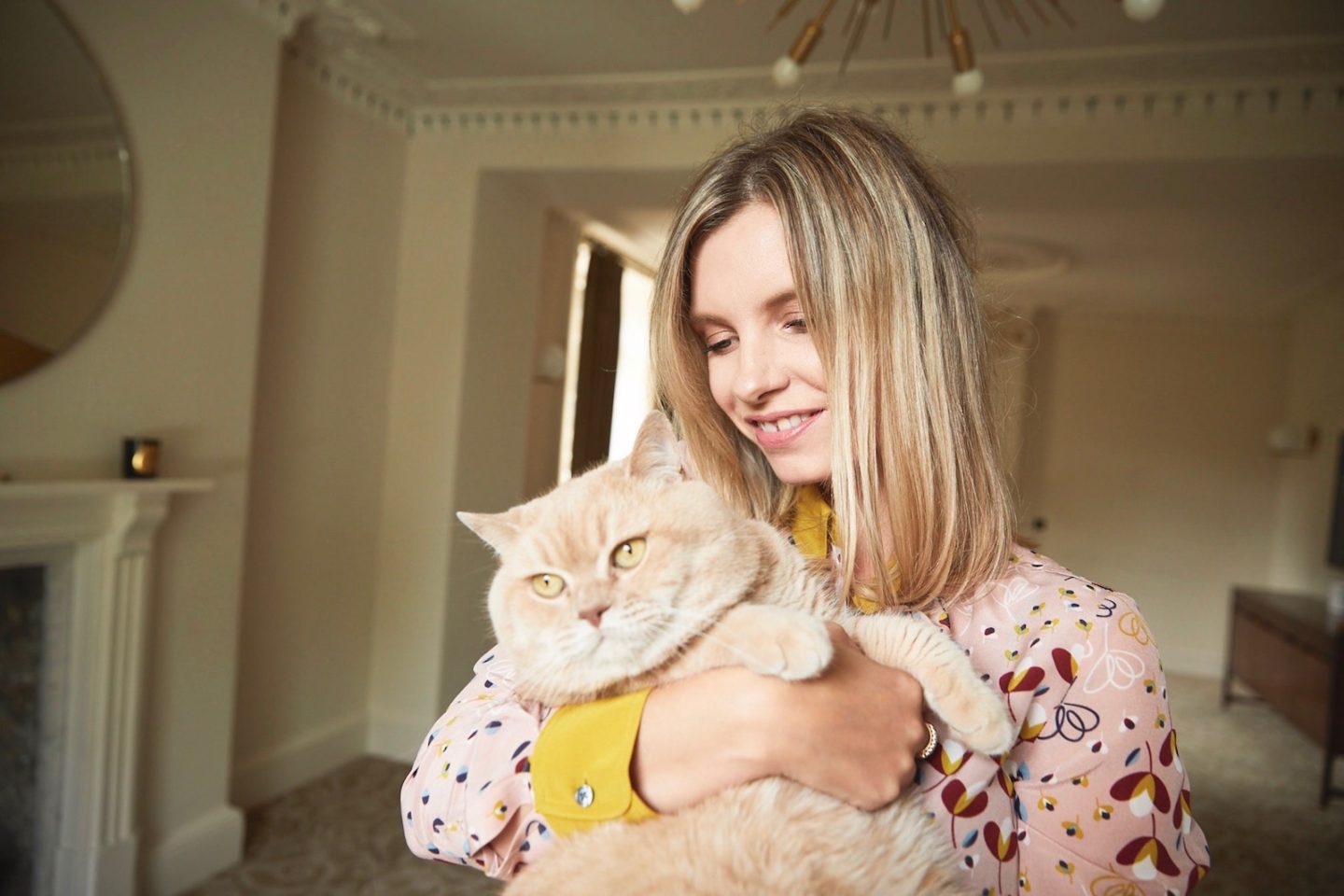 I have many silk shirts (I went through a slightly frantic phase of buying cut-price Equipment shirts from The Outnet) but this Boden one, strangely, has garnered the most interest. I say strangely, because the others (all a bit more “rock ‘n’ roll”) have seemed more my style with their deconstructed leopard prints and lightening bolts and silver stars, but there’s something very comfortable and easy about this print. 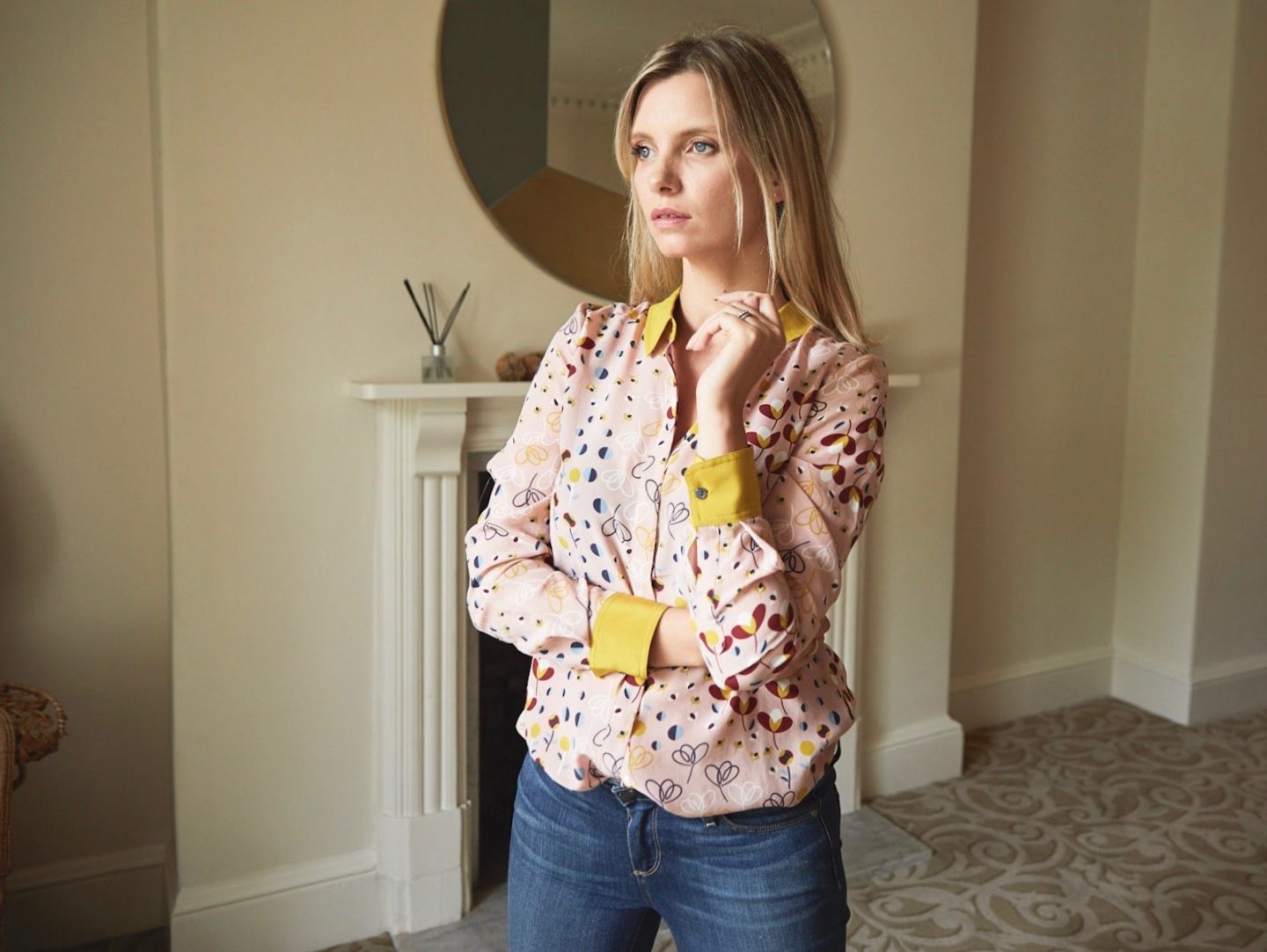 Which is called, by the way, Milkshake, Meadow. Note the comma between the two words: I’ll admit it has thrown me. I mean Milkshake Meadow would be abstract enough – what is it? A field where people go to drink milkshakes? My milkshakes bring all the boys to the meadow? Or a meadow that has been flooded with milkshake, like a weird trippy LSD-enabled scene from a Beatles video?

But no, there’s a comma. The print is called Milkshake, Meadow. It’s so cryptic. And somewhat enticing. I love milkshakes and I love meadows. Sold. 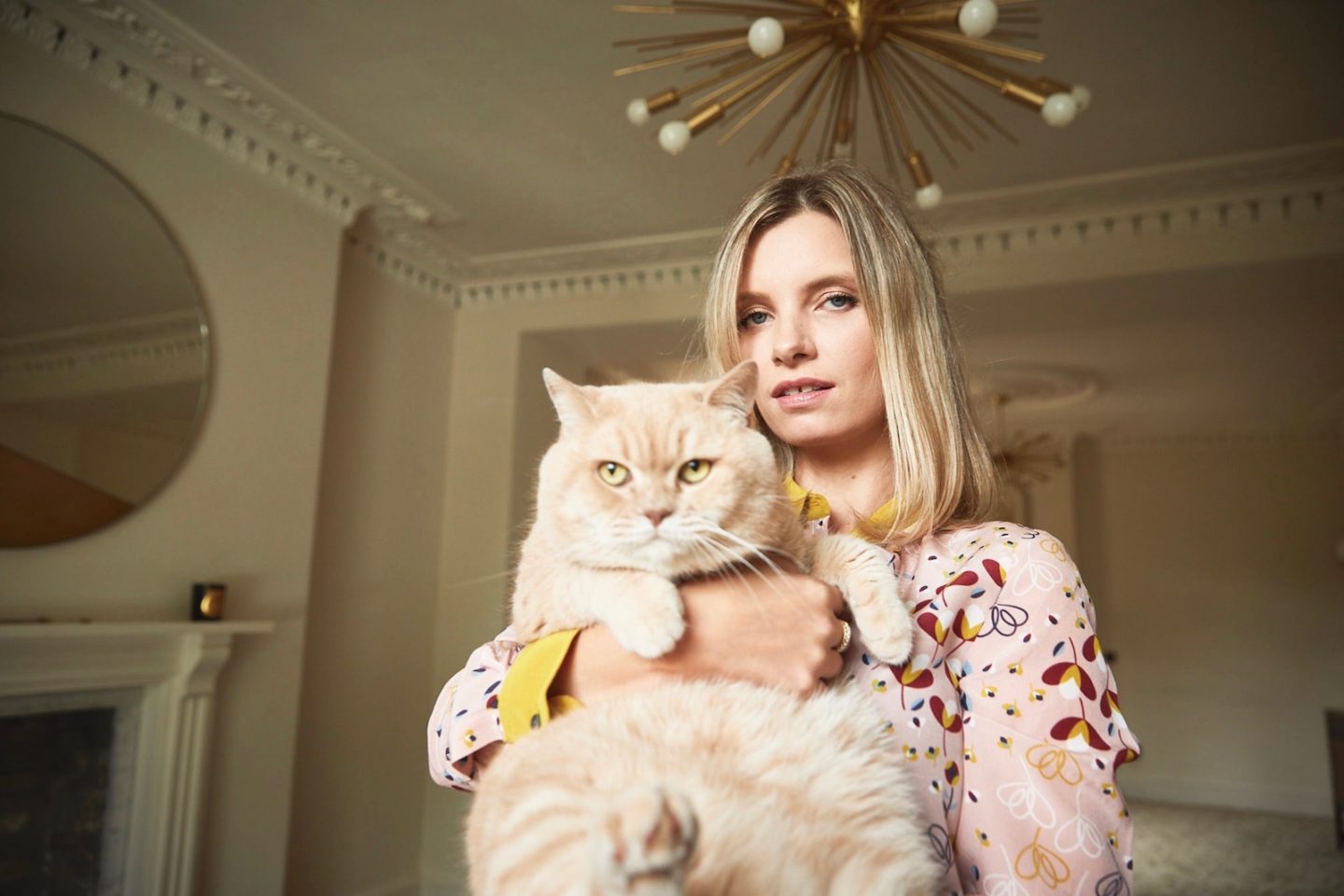 If I had to describe the print, though, I’d say it’s more Orla Kiely than Milkshake Meadow. I’d be crap at thinking of names for things, if I had a shop – this shirt would probably be called “autumn print with ochre accents” which would bore people to tears before they even clicked on the image.

This is possibly the most irrelevant digression that’s ever happened on a fashion post so I’ll stop now – you can find the silk shirt at Boden here*. It’s £110, but I had a code on the back of the catalogue thing that came through my door and got 10% off. I have a size 10 and it fits perfectly, despite me being more of a 12 on account of my 30E boobs – and on a practical note, it is 100% silk but I feel that the pattern makes it slightly less scary in terms of getting it accidentally stained. Easier to wear than one colour silk, which I tend to ruin within about eight minutes.

(I once went on a cooking TV show with my friend Ruth (not an imaginary friend, she just shares my name) and I wore a brand new army green silk shirt from Whistles. In the first three minutes of the show, I whisked something in a bowl and splattered the entire left side of the shirt. Three minutes! Ruined! I still have it in a cupboard somewhere because I couldn’t bear to let it go, despite three different cleaners saying it was a hopeless case.)

By the way, I have no idea why I’ve punctuated this post with pictures of my cat, Mr Bear. He was just there, available, and I made use of him. I know he’s massive but apparently not overweight for a British Shorthair, so that’s…surprising. I mean he’s almost as big as me so I’m sure he eats trifles or Victoria sponges or full cheese boards when we’re all asleep.