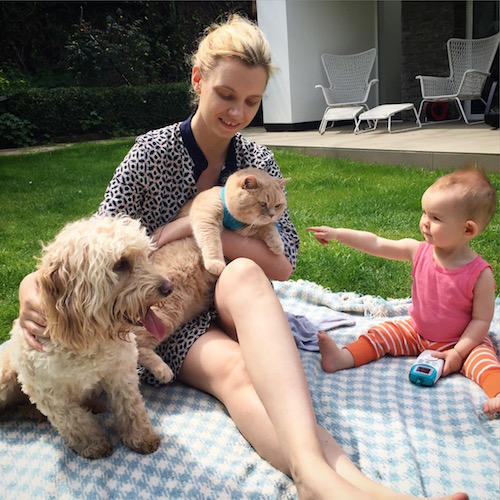 This month can mainly be characterised by separation anxiety (mine) and growth spurts (baby’s). Last week I did a three day stint in France followed by a two day stint and I had worked myself up into such a state before I went for the first press trip that I considered flying the baby out with me, and perhaps my Mum, so that I could feed the baby in between activities! Luckily I pulled myself together and – actually – by the time I’d arrived at Heathrow I was in my element, reading magazines and nipping to the breakfast bar to get fresh orange juice and not worrying about whether a small, mobile being was about to strangulate herself with my laptop charger. I drank wine (in the evenings, not at breakfast time), I used an alarm to wake up in the morning (haven’t set an alarm in over a year) and I stayed up until the early hours editing video footage, knowing that in the morning I’d only have myself to think about, therefore only needed an hour to get ready and have breakfast.

A few days off is utterly gorgeous, but I missed the baby so much. There is nothing that cheers me up more than making stupid noises at her first thing in the morning, unzipping the little sleeping bag and getting her out when she’s all warm and sleepy. I was OK when I kept busy, but the odd quiet hour in my hotel room just seemed too quiet – and I found it unnerving being able to leave my wires and tweezers and dangerous objects all over the place. It’s amazing how quickly you become one of those people who evaluates the health and safety risk of every single action – is the suitcase likely to topple? Will that shoe trip me up and send me flying face-first into the glass coffee table? Anyway, I’m waffling: here’s the 11 month update.

Lots of crawling happening, now, though she still likes a roll and a lazy kick about on her back. She can stand if she’s holding onto something but doesn’t bother to pull herself up very much. I think it’s because she’s so tall – I mean, off the charts tall. I’d measure her but I don’t have a tape measure that’s long enough. I’m sure she’s about thirty feet tall. Or she will be, by the time she’s eighteen. Her legs are like pipe cleaners. Apparently I was the same, though I’m not that tall now, at 5’7″/5’8″ (can’t remember which I am, we used to bump up my height for my model card!), but my husband’s family are all very tall and my brother is about 6’5″. I’ll measure her for next time and let you know.

Angelica now has two bottom teeth and one on the top, with the other front one trying to come through. I think she’s going to have a gap like her Mum – I suppose I’ll know by the next update! Teething wasn’t too traumatic, really – at least not for me! Crying was minimal and I only really used Calpol once, when she seemed terribly upset about it, and teething powders twice, when she was a bit grouchy with it. Her favourite thing at the moment seems to be biting my big toe if I’m lying on the floor with her – what a shock! I mean! Have you ever had your big toe bitten? It’s just not something that happens! (At least not to me, I’m aware that it’s a “thing”. It has never appealed.)

Sleeping habits are improving week by week – the four-times-a-night waking seems a distant memory, now, so much so that I can’t really remember the details to write a post about it! Is this memory-wiping a thing that happens to all parents, perhaps an evolutionary thing so that we forget the taxing times and are keen to have more than one child? I mean, I battled through without too much trouble – knackered but content – but being able to sleep through is infinitely preferable. She does 7pm-7am and then two good naps in the daytime – hurrah! If I actually went to bed at a sensible time, instead of writing baby updates until 1am, I’d actually get a good amount of sleep!

Feeding hasn’t progressed too much, but that’s mainly my fault because I worry about her choking on bits of food. She eats very chunky things, but I stress about stuff like toast and whatnot because she has only got those three teeth and how on earth is she supposed to eat it? Also: 99% of everything that doesn’t go into her mouth via my spoon lands on the floor. And the dog hangs about waiting for every single morsel, which is annoying. I might have to start banishing him to a different room at feeding times. He’s developed a penchant for banana, toast, rice cakes, weetabix, mango yoghurt, mango pieces, cucumber and lamb stew.

How’s the old bod getting on, I hear you ask? Well. I wrote a post about it on A Model Recommends, if you care to give it a read – anything I say here will probably be a repeat. You can find the post here. Oh! Actually there is one thing; whilst I was away, and being rather slack about expressing milk (the baby went back to breastfeeding just fine after I was in France, by the way) I found that my boobs started shrinking. I mean really shrinking. I’m not sure they’ve really gone back. Also, I’ve realised that my boobs are around two inches lower than they were before I started all of this baby-producing business – I have to stand on tiptoe to see them in my bathroom mirror, whereas they used to be all pert and up by my chin. Almost. Or maybe I’m just remembering them through rose-tinted glasses…