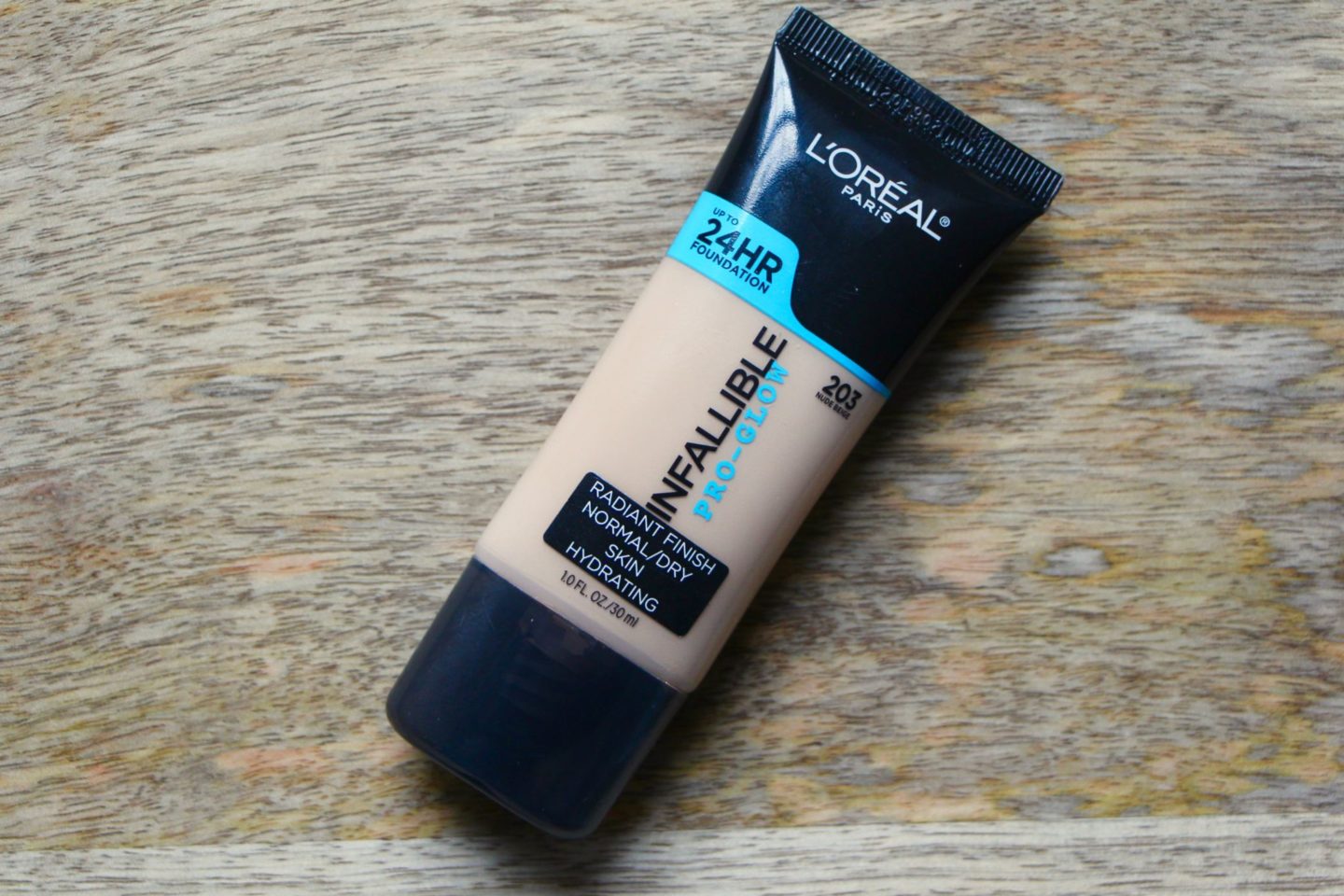 I’m late with this L’Oreal Pro Glow Foundation review but I think it’ll have been worth waiting for, especially if you are on the hunt for a flawless-finish foundation that manages to look fresh and natural on the skin, that has a bouncy, plumptious finish and great hold. A Holy Grail foundation, if you will, but one that doesn’t cost the earth.

But apologies to those of you who have been patiently waiting; I’ve never had so many questions and comments about a foundation before and so I developed a sort of performance anxiety. I always have an element of self-doubt when I fall massively in love with a beauty product – what if it’s just me? have I tested it enough yet? – which causes me to go the extra mile when I’m putting it through its paces. Just to be sure.

So to cut a long, meandering introduction short; I’ve tested the L’Oreal Infallible Pro Glow foundation to its limits, comparing it with dozens of other foundations and wearing it over a huge array of different face creams and serums and oils and sunscreens and that is why this review is so late. 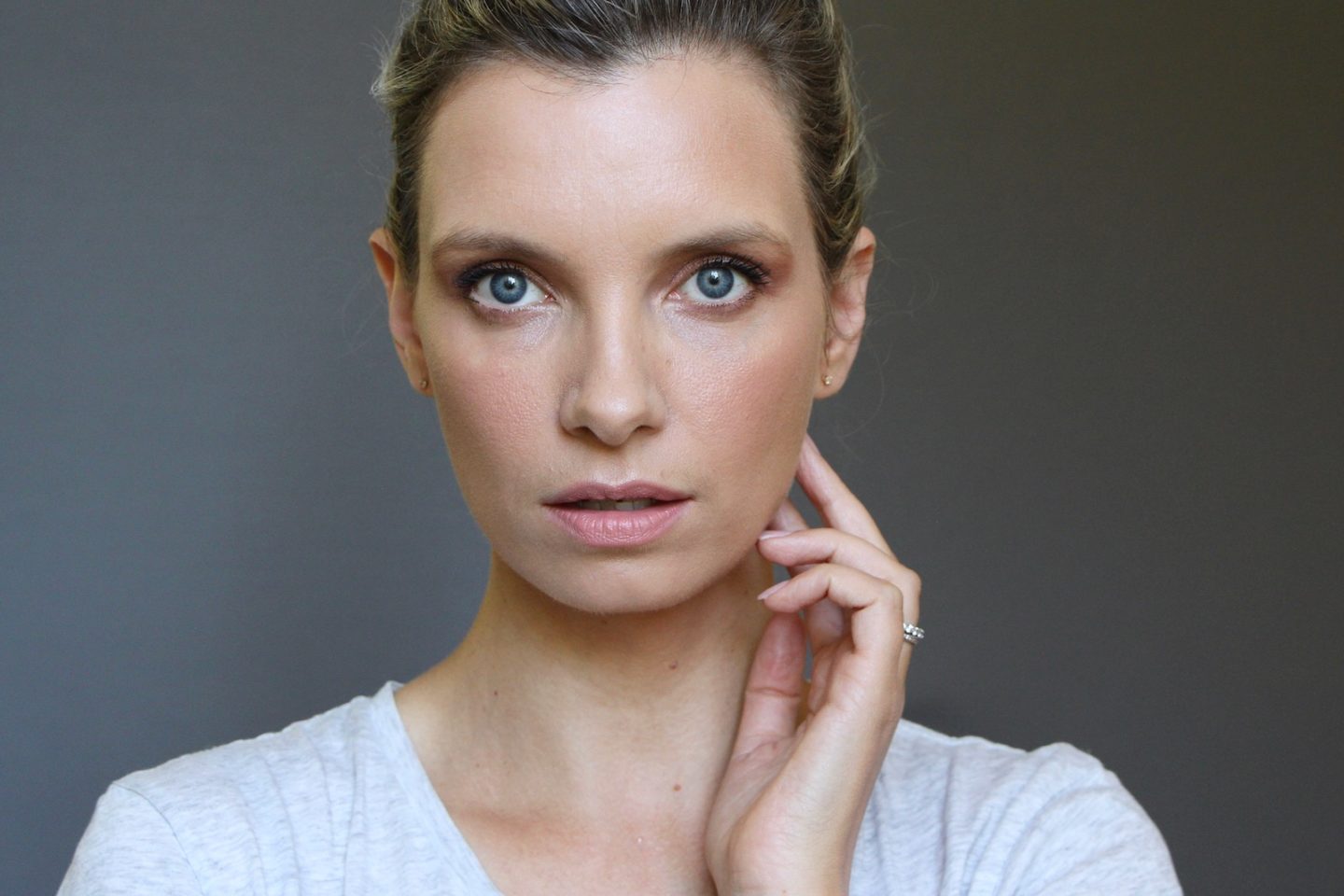 I’ll start boldly here and say that if you did a blind test with L’Oreal’s Pro Glow foundation and some similar, very expensive foundations (I’ll use Lancome’s Teint Idole here for ease, seeing as though I’ve tested the two out in tandem so many times) then you would be very hard-pushed indeed to tell the difference.

Pro Glow was an instant hit when it launched in the US, prompting a small barrage of emails and messages from people asking me to find out when it would hit the UK. But it didn’t, not for ages, and I’ll admit that I was impatient to try it. The reviews were outstanding, the videos I watched showed a foundation that looked right up my street – non-cakey, a radiant finish and a texture that felt moisturising and comfortable. 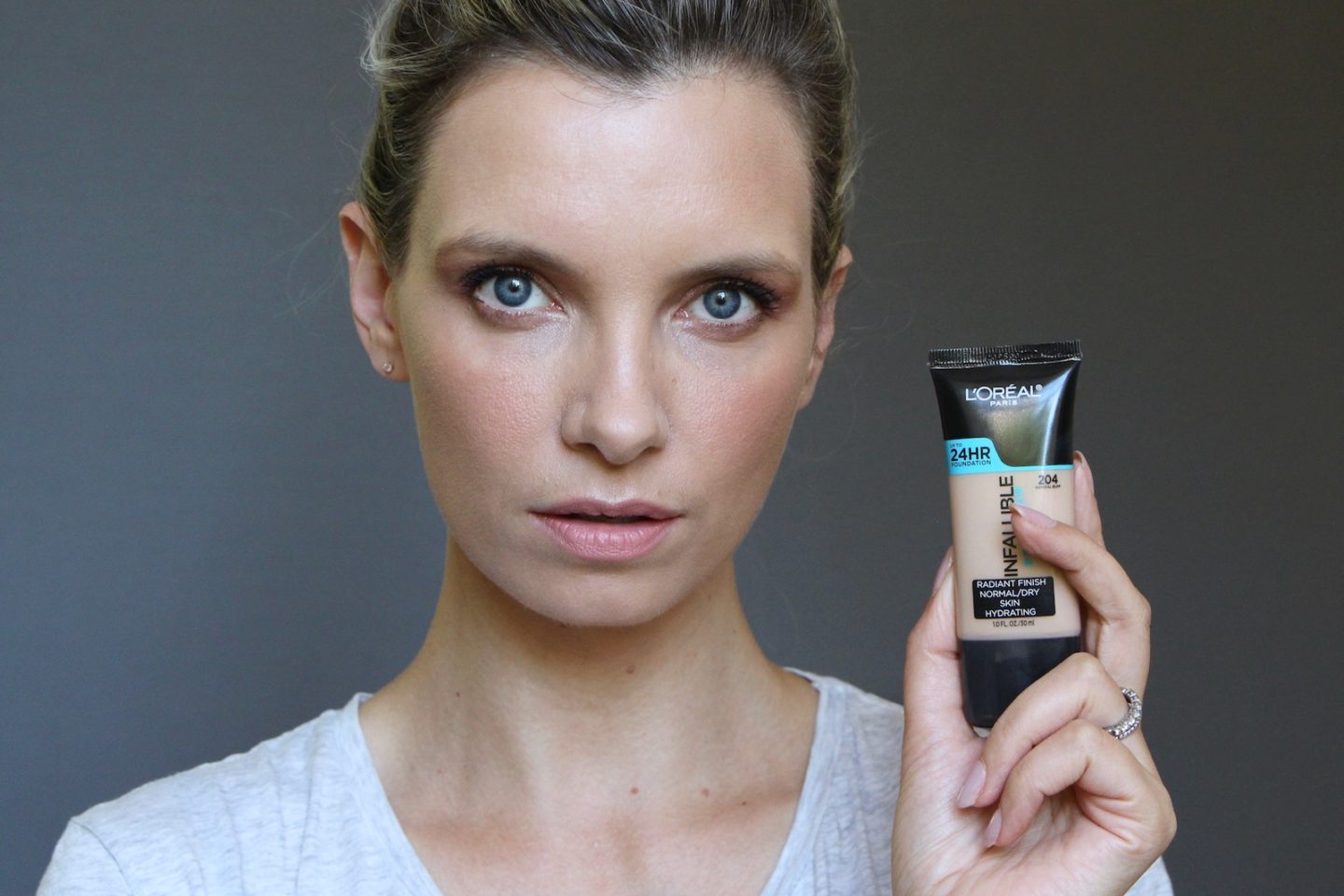 Well I can confirm that a) Pro Glow is now in the UK (it’s only at Amazon here* at the moment but I’ll update you if I hear any news of when it will go to other stockists) and b) it is all of the things I hoped it would be. So many foundations now have that elegant, “lit from within” kind of radiance, but few give you the radiant feel as well as the radiant look. So many high-end foundations are very clever in that they can give you that matte, perfectly set finish but still be glowing (Dior’s Forever, Chanel’s Lumiere Velvet, off the top of my head) but sometimes I crave a bounce to my skin, the feeling of moisture on the surface. Not a greasiness, just the pleasing feel of plumptious, well-watered skin. 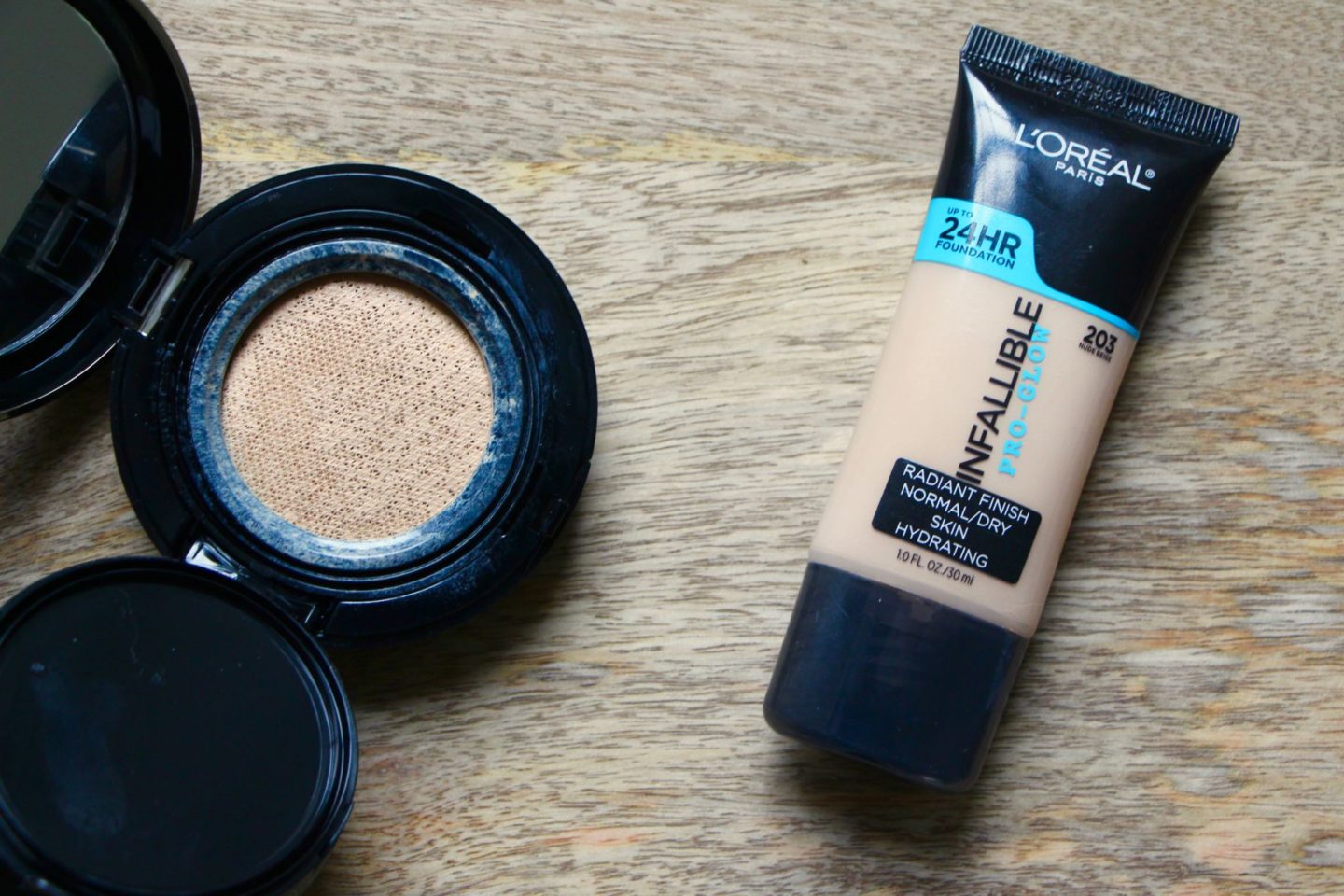 I remember feeling the same way about Lancome’s Teint Idole as I do about L’Oreal’s Pro Glow; you can read the full review here, but to pick out the relevant bits I was “won over” by the “gorgeous formula”, writing “it’s one of those high-powered face bases that offers it all – a youthful glow, a juicy finish and coverage so full that a proper application leaves you looking as though you’ve been given a new skin.”

I really could just copy and paste that section and give it a new title, because Pro Glow seems so similar. L’Oreal rate Pro Glow’s coverage as “medium”, but after a number of comparison experiments involving moles, biro marks, iPhone cameras and pointlessly late nights, I can confirm that there is very little in the way of difference between Teint Idole’s coverage (which is marketed as full) and Pro Glow’s. Ditto longevity (says 24 hours for both, I’ve tested to 14 and it didn’t flinch), ditto beautiful, youthful finish.

If you have dry skin and have been craving a foundation with fuller coverage with a realistic, non-glimmery radiance then I feel that your beauty ship has just come in. Clinique’s Even Better Glow and Clarins’ Skin Illusion are both nicely dewy on dry skin, but Clinique’s isn’t as comfortable on dry skin as the Pro Glow and both the Clinique and Clarins have far lighter coverage. If you’re looking for coverage without heaviness, whether your skin is dry or not, you will also (I hope) rejoice when you try this face base – it’s somehow light and fluid but at the same time glossy and plumptious. The end result reminds me of a makeup artist trick I used to always be fascinated by; buffing a few drops of face oil into the skin before foundation, to give that gloriously smooth, sheeny finish.

So the before and afters: 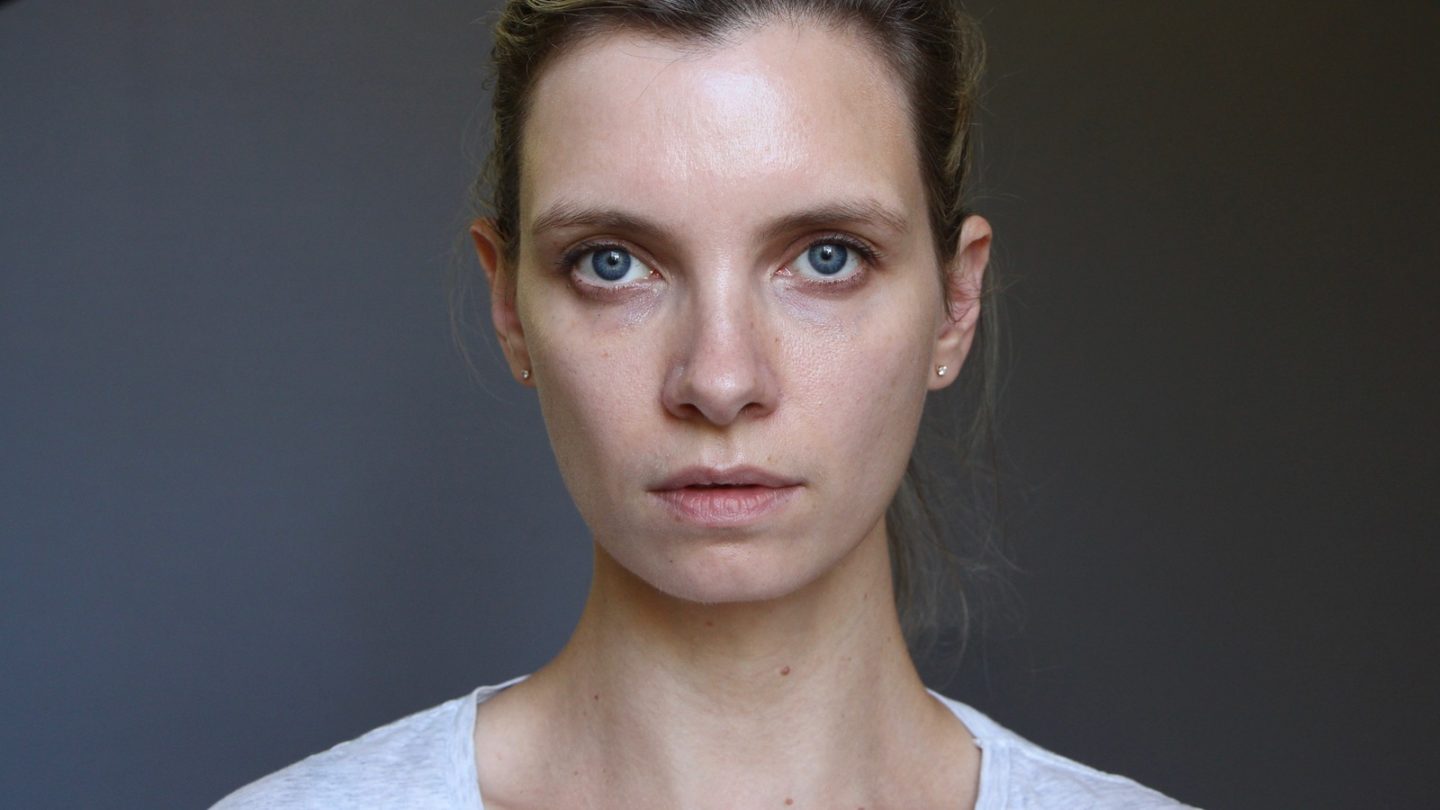 I’ve used shade 204 here, but 203 also suits me well, depending on whether I want some extra warmth. I’m afraid it was an incredibly good skin week (great for me, bad for foundation tests!) so we’re looking at overall evenness of tone and beautiful finish, here, rather than degree of coverage.

Although you can see coverage better close-in: 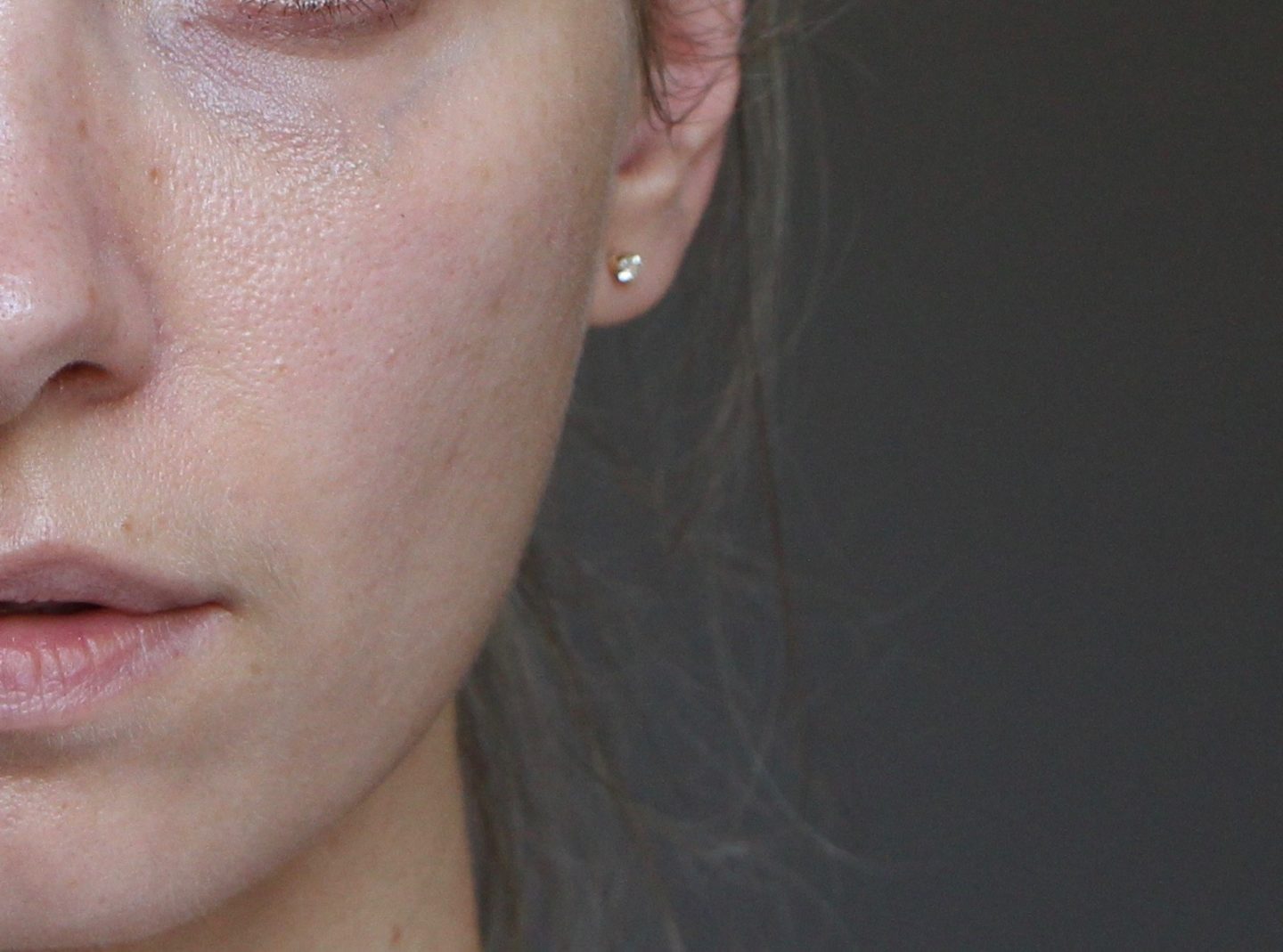 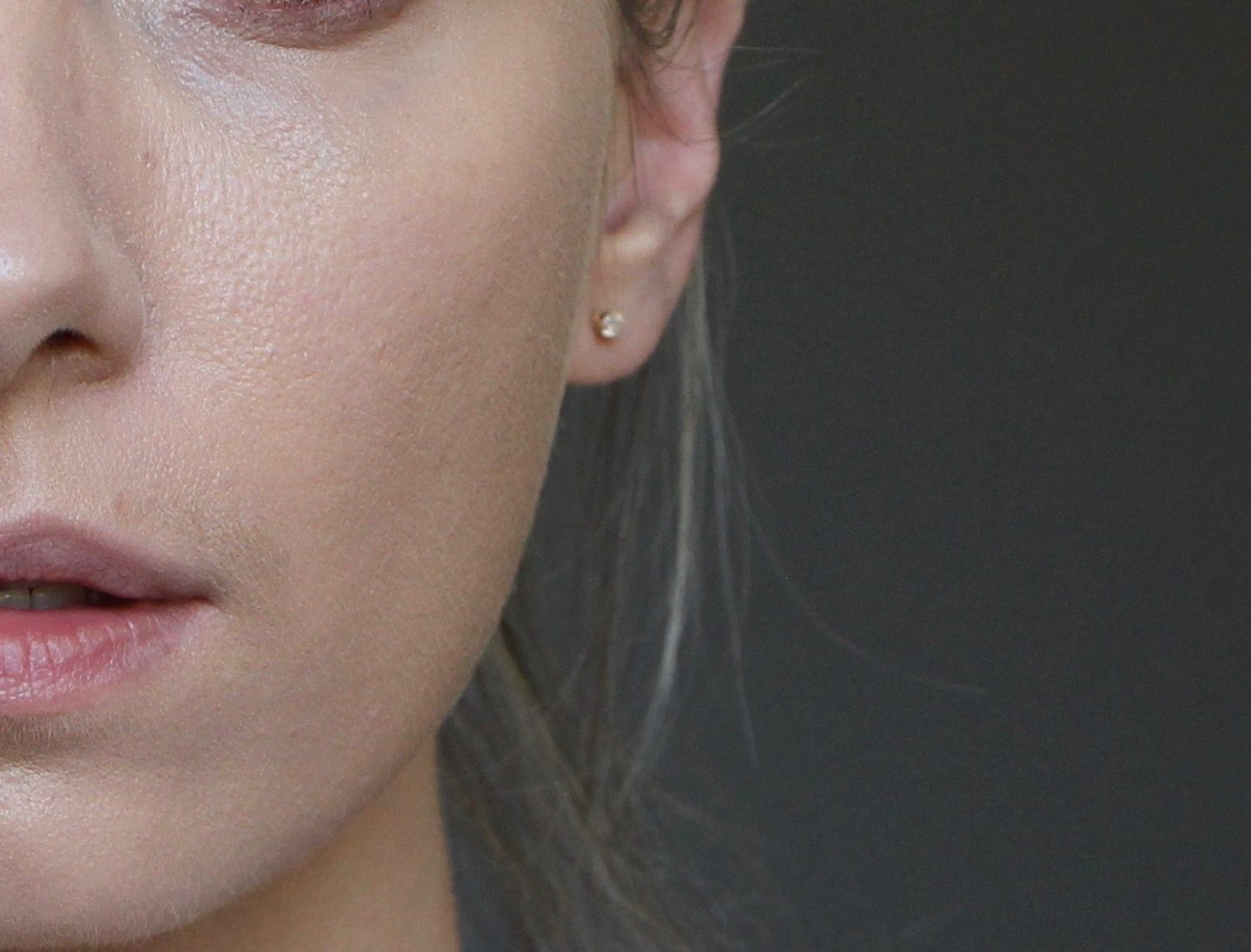 If you focus on the small marks and moles near my nose, it’s easier to compare. I’d also draw your attention to the fact that this foundation doesn’t clog around the upper lip fuzz danger zone – it’s light and liquid enough to blend nicely over it.

I’d go on about the bouncy, fresh-looking finish again too but things would start to get repetitive so let’s move on to the negatives. I had to dig hard, for these, but if pushed I’d say that the tube packaging is ever so slightly dribbly, so you have to be fast when you take the lid off and have the back of your hand ready and waiting to catch the product. (Or the brush, if you like to apply directly to the brush. I don’t, as the product tends to drop right down into the bristles and it’s a waste, but do as you please.) 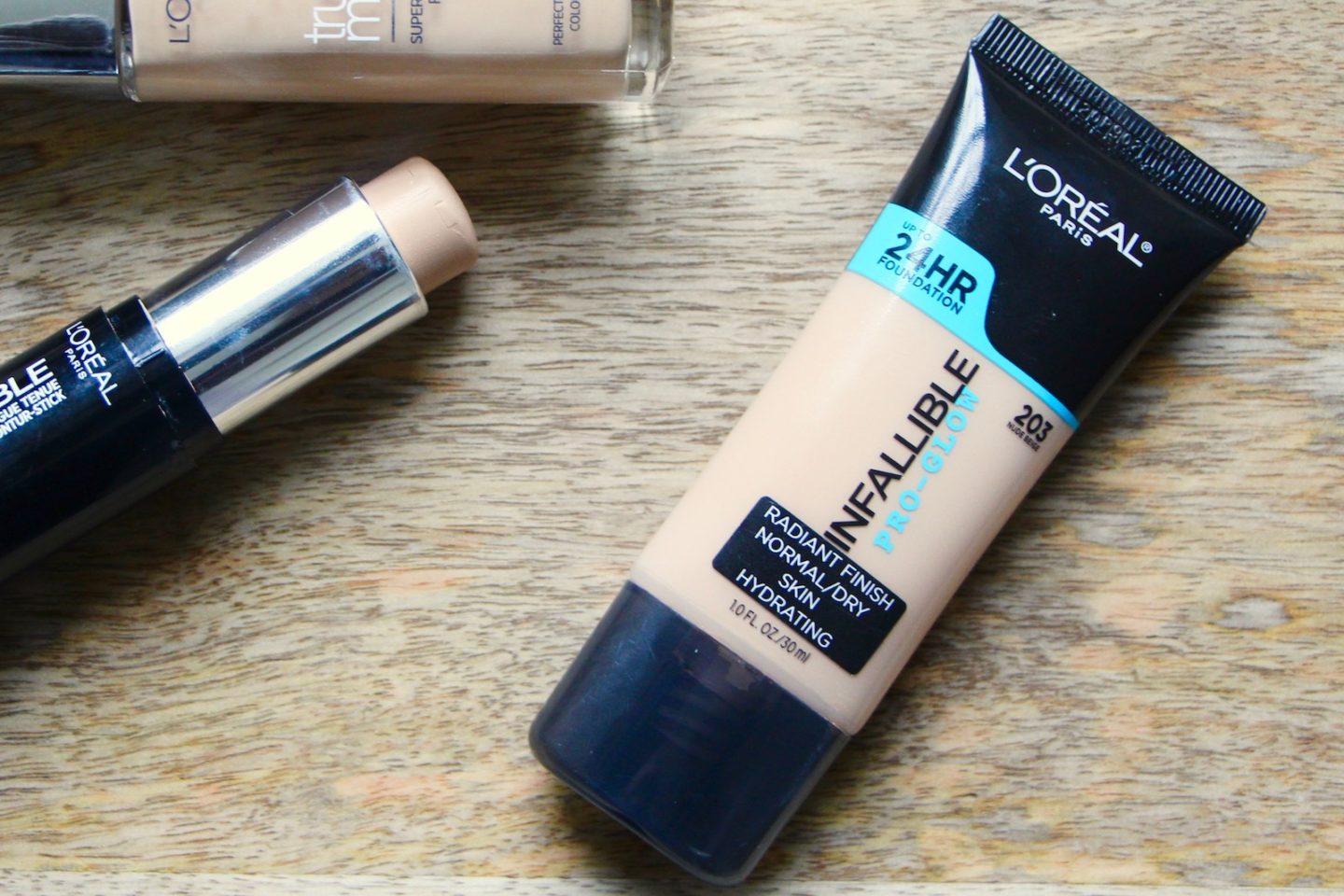 The only other negative is the relatively small shade range – in comparison to L’Oreal’s True Match foundation it’s a bit sparse with just twelve shades, but I’m hoping that they will expand this soon. Lancome’s Teint Idole has a whopping 40 shades in the range, so if you did want a better match and have the cash to spare (£33 rather than £12) then I can tell you that you’ll be buying an incredibly similar foundation. Elegant, believable and comfortable to wear. A plumpy finish but one that sets fast and won’t shift.

I’ve had quite a few requests to compare Pro Glow to the new (also gorgeous!) Max Factor Radiant Lift foundation, so I shall get onto that next week. I’ve spent the past few days wearing them on one half of my face each, being the dedicated tester that I am.

Update: I’m now reviewing foundations on Youtube as well as here on the blog. The first video is here – you can see the foundation being applied, but I’ll go closer in next time, for your viewing pleasure!