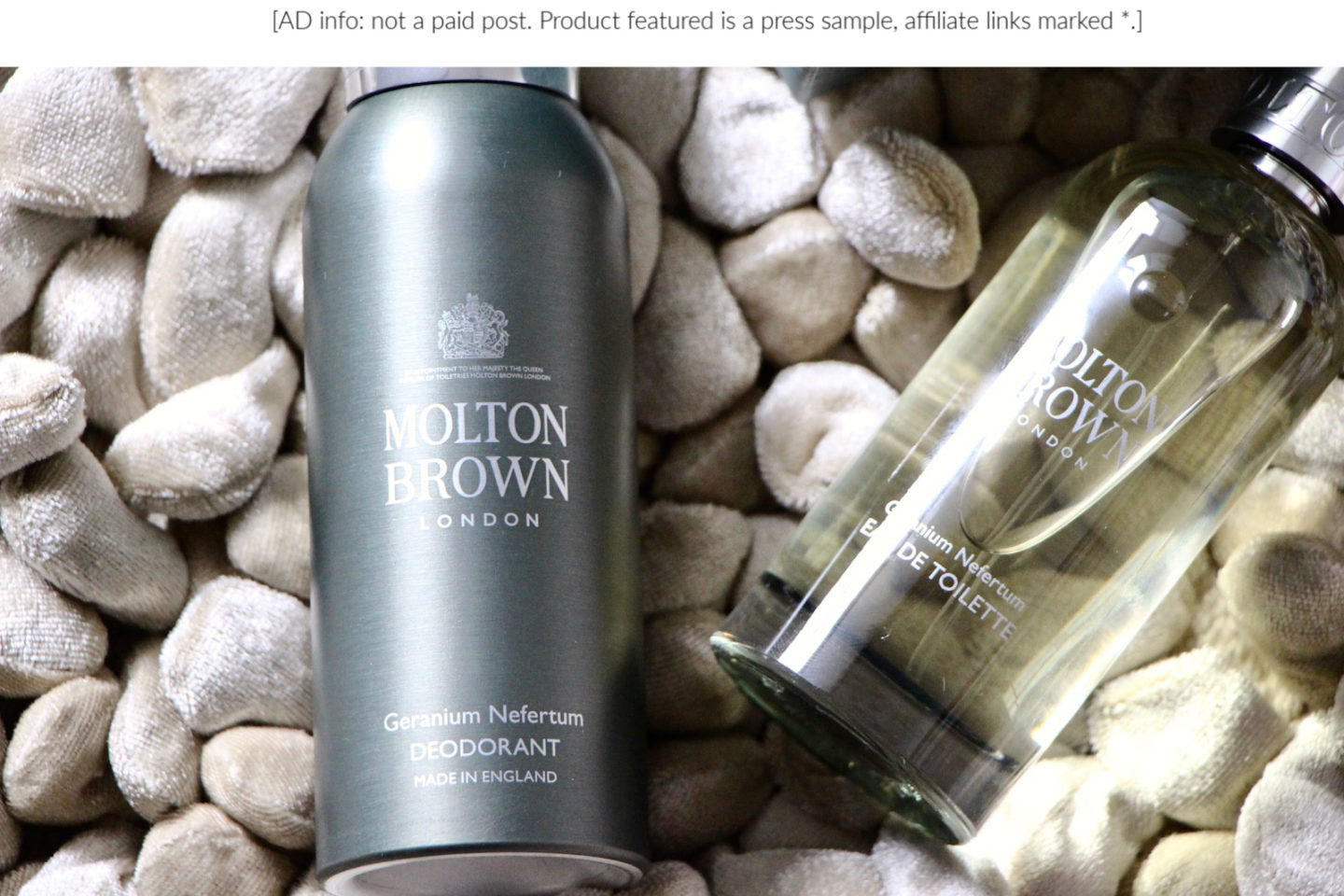 Well, Molton Brown’s new Geranium Nefertum range is a bit of a surprise. I can’t remember the last time I needed to try a fragrance on Mr AMR with such immediacy – I actually sprinted down the stairs to spritz him. He thought I’d won the lottery such was the hysterical, breathless enthusiasm with which I burst into the kitchen and ran to grasp his wrist. And my haste was well-rewarded; Geranium Nefertum was sexy enough when I had merely sprayed it into the air in my office – on a real person it was positively irresistible.

In my office, it left behind what could only be described as “the aura of an incredibly handsome and capable off-duty secret agent”. It was as though Richard Madden from Bodyguard had briefly entered my office (nearly typed orifice then, that would have been both revealing and embarrassing!), placed a top secret file upon my desk and slipped back out again. 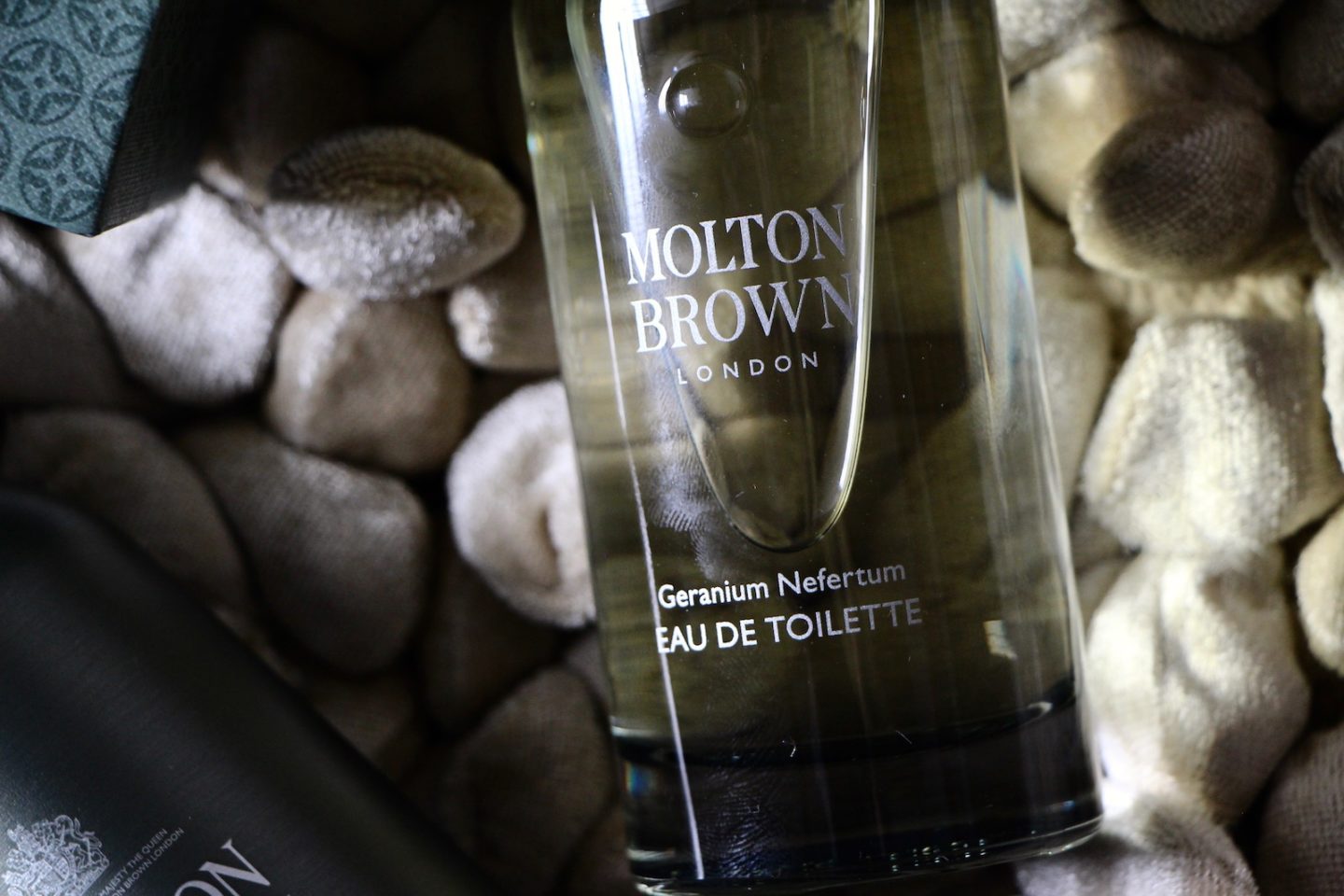 If I could pull myself together enough to attempt a rudimentary description of the fragrance then I’d say it’s a combination of the two greatest things in the world of scent: fresh fig and sexy, woody (but not oudy – I’m bloody sick of oud at the moment!) base notes. It’s the cleanliness and the freshness of a bright summer morning (riding in the helicopter, post-coital, on your way Crete to MI6 for another de-briefing) mixed with the exotic notes of an undercover mission in a Moroccan souk. The musky notes of a hot man in a white linen shirt, sleeves rolled up to reveal tanned forearms.

So yes, fresh notes of fig (best scent in the world) with bergamot, geranium and jasmine (they just add a little hit of exotic floral) and sandalwood, oakmoss and labdanum. This is what I imagine Tom Hardy would smell like if they lifted my restraining order long enough for me to sniff him. Again.

And Geranium Nefertum is absolutely not the sort of smell you’d expect from the name. I mean I quite like Geranium, it’s really ok, but it doesn’t fill me with any kind of excitement and it certainly, as an olfactory offering, doesn’t make me want to tear anyone’s clothes off. And what of this Nefertum? I had no idea what Nefertum even was and was forced to use Google. 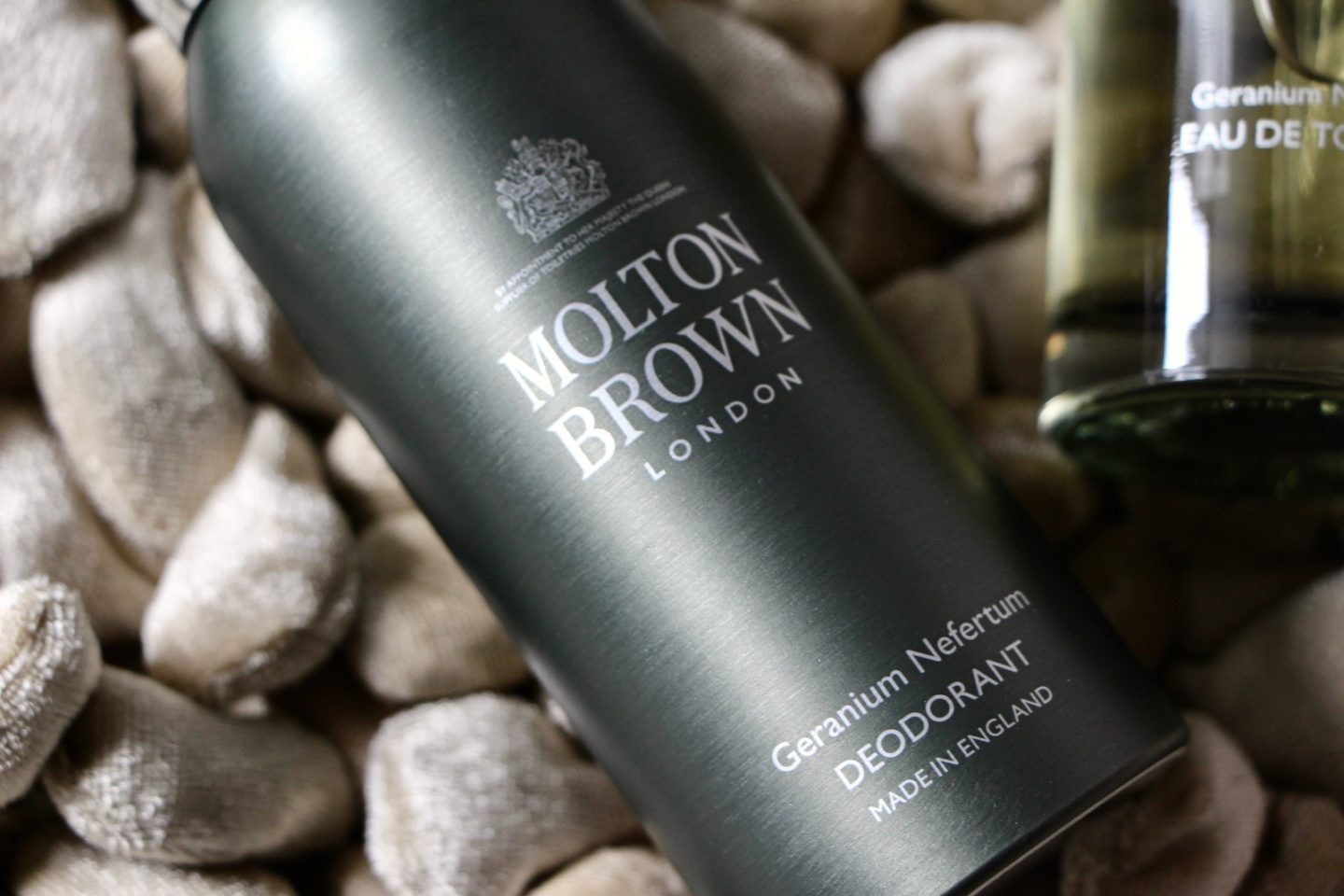 Turns out Nefertum isn’t a fragrance note, it’s a God. The ancient Egyptian God of perfume and aromatherapy, no less, a role that – if I had the choice – I would definitely opt for, if they were handing out Godships at Ye Ancient Pyramid Club.

“War: who’s up for taking over the God of War role? Brian? Brian! Do you want to be God of war? Righty-ho, here you go. Robes are in the cupboard over there and if you want a crown then dig around in the bottom of the big wicker basket. Thank you Brian, see you next October. You, there – Eileen – Goddess of love, perhaps? Yes I know this is all very stereotypical Eileen, but it’s ancient Egypt. OK, what do we have left… God of the dead, done, God of science, tick tick tick… Jackal-Headed God. Who wants to be the Jackal-Headed God? Donna? Well of course it gets stuffy in there but you can take it off when your shift ends! It’s Jackal Head or the head of a Scarab Beetle? Much of a muchness, role is pretty samey, at the end of the day. Ooh! I forgot about this one – God of perfume and aromatherapy. Anyone? Anyone? Somebody kick Ruth in the shins and wake her up, would you? This one is perfect for her, there’s absolutely no responsibility and she can just lie in the bath all day.”

Back to the present, now, but you get the picture; and actually, I quite like the ancient Egypt reference because there’s something musty and musky and exotic about this fragrance – hot, dusty sand and the faint smell of flowers carrying through the breezeless air. 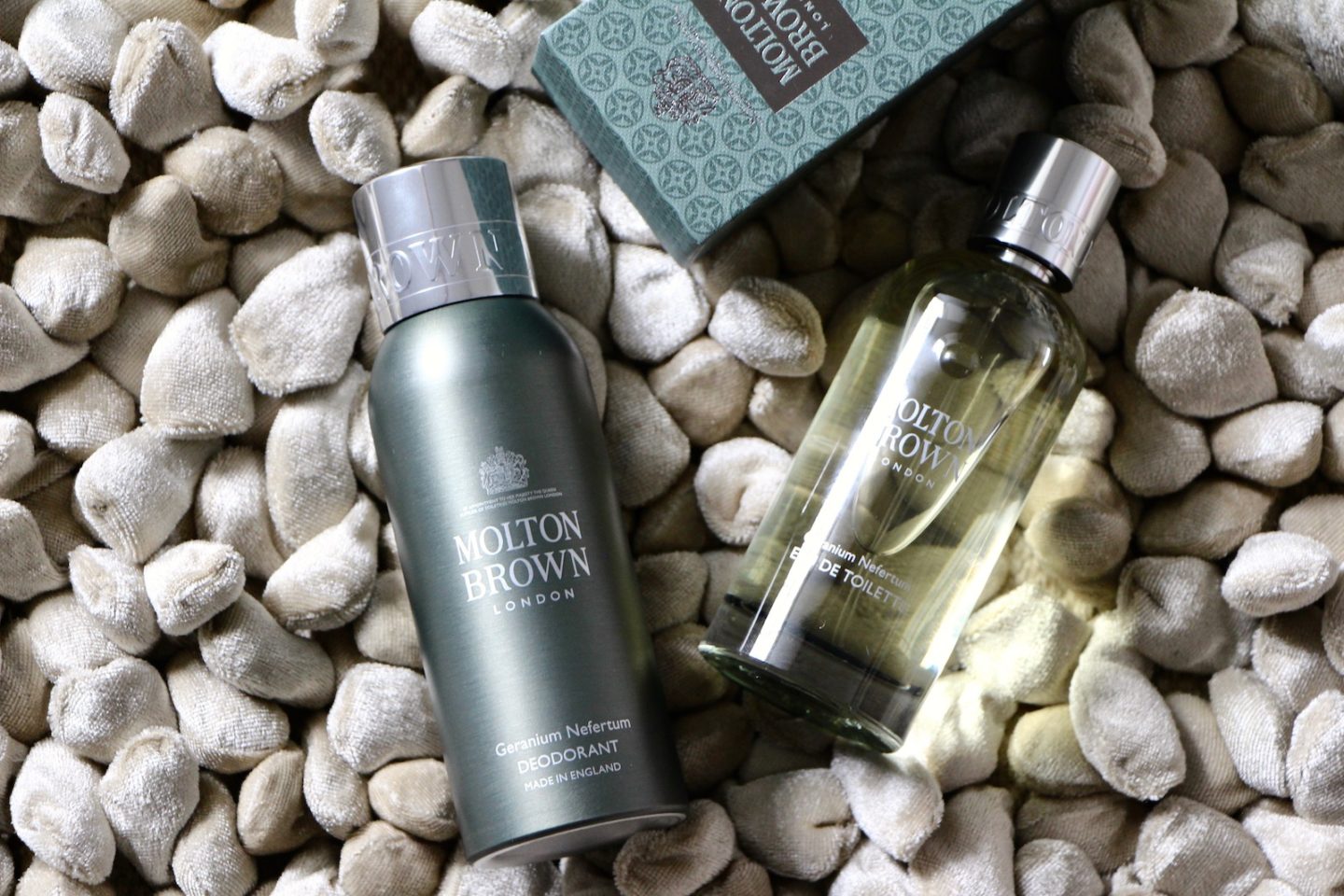 It’s at once musty and clean, sweet with florals yet deep with the sandalwood and labdanum and oakmoss. Good grief, it’s marvellous. Just the sort of thing that would make my head turn if I passed someone wearing it – an honour usually reserved for people wearing scents from Le Labo or Byredo, who seem to make most of the fragrances that have a knee-trembly effect on me.

Mr AMR has already nabbed the Geranium Nefertum deodorant*, £20, which is one of those lazy-shower spray-on affairs, but there’s a posher Eau de Toilette* for £69 with greater longevity and (dare I say it) an even more sultry effect. 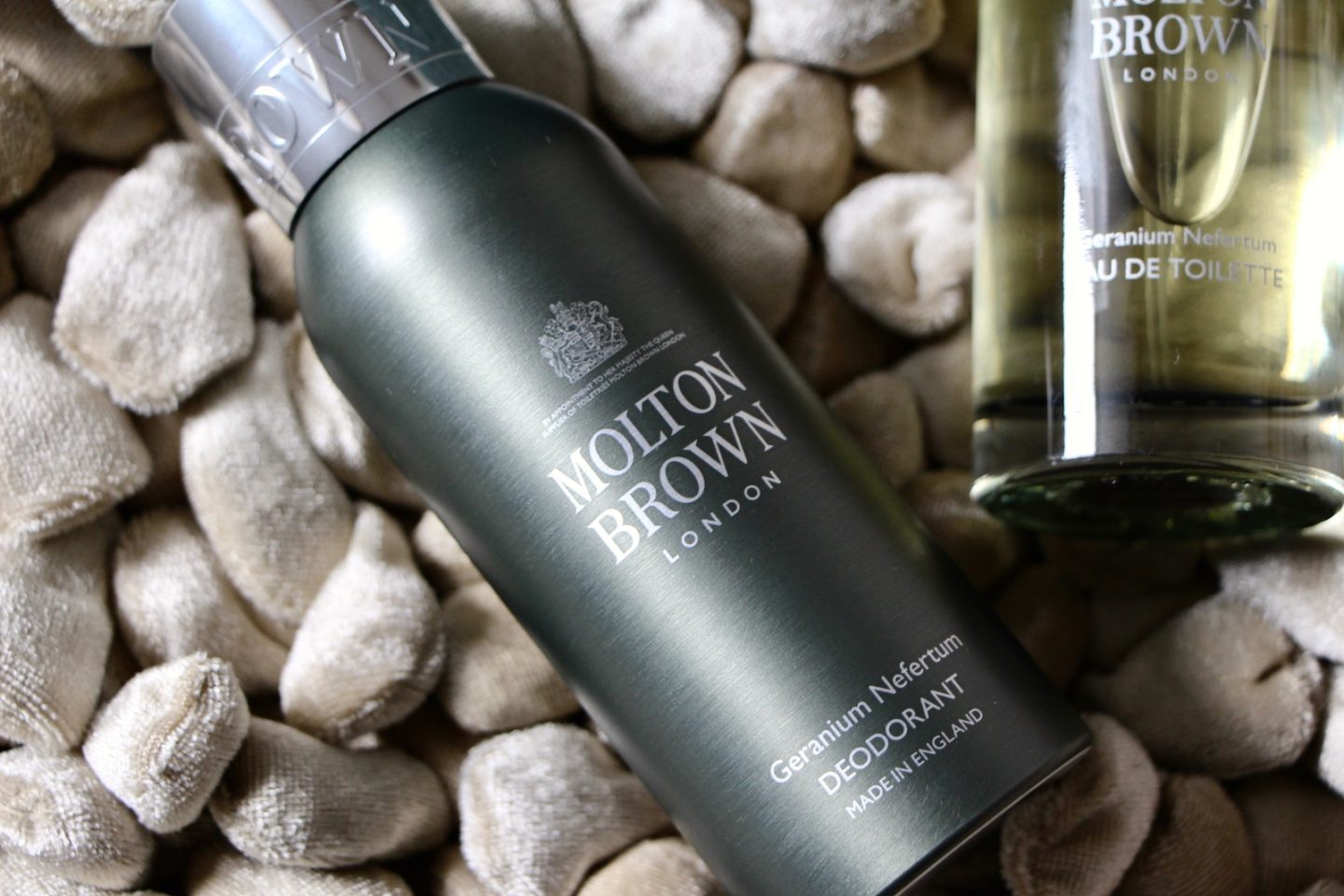 And I must apologise, because this is marketed as a unisex fragrance and there is absolutely no reason at all I have banged on about sexy men other than that it smells exactly how you’d want a sexy man to smell. If you like sexy men. If you like sexy women then this will not fail you either – its appeal is absolutely universal.

You can find the new range at Molton Brown here* – it includes body lotion and shower gel as well as the sprays – or LookFantastic here*.