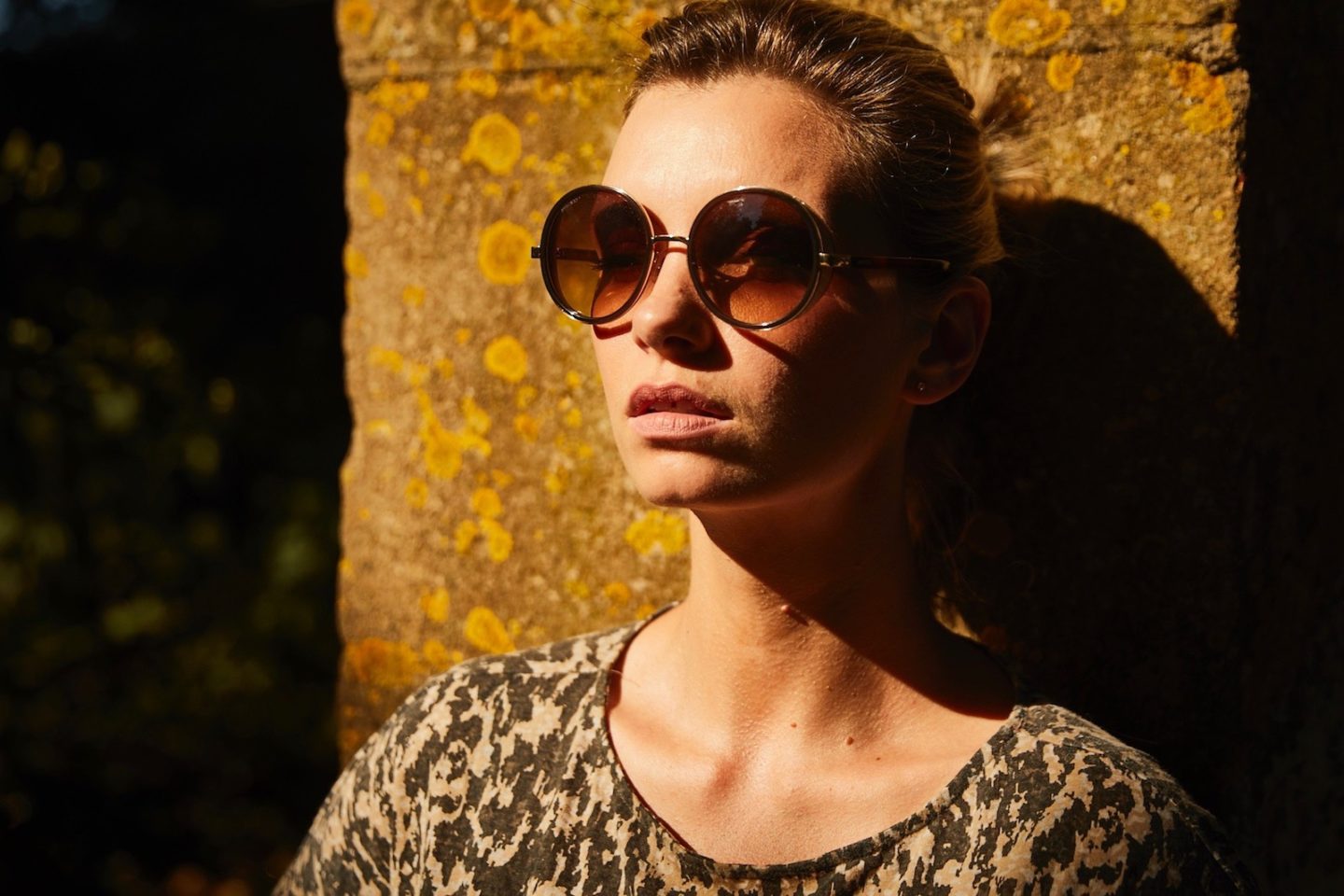 The other week I stayed overnight at a friend’s house and made the mistake, the following morning, of applying the world’s richest, stickiest night cream to my face and neck. I’m not going to say who makes it, because I used it at the wrong time of day and had I used it as intended – at night – the situation wouldn’t have been half as bad.

Actually it still would have been unbearable. I don’t know how anyone wears this night cream comfortably, unless they sleep rigidly on their backs with their faces pointing directly upwards and well clear of any surrounding fabrics (pillow, sheets) and with their hair completely scraped back.

To call this cream “rich” is to be grossly inaccurate; it’s both incredibly sticky and improbably greasy all at the same time and “rich” doesn’t quite do it justice. If you ever wanted to make your own fly paper then this cream is what you’d turn to for your coating. Although maybe it wouldn’t be the best concoction; the flies would stick but then they’d be sort of gliding about all over the place on the grease. Like a fly ice rink. Stuck fast, yet unable to stop their little feet from skating to and fro. God, that’s a grim thought, isn’t it? Imagine being glued to one of those cross-trainers, forced to pump your limbs backwards and forwards a million times until you finally die?

Anyway, I put this night cream on and instantly regretted it. My hair stuck to my face like a beard, so I tied it back. I set off for the bus stop and about eighteen different insect species flew straight onto my flypaper skin, never to escape. On the bus, various passengers became glued to my visage. And as my journey to Paddington progressed, I grew hotter and hotter and the cream began to melt. Like a joint of meat leaking its fat, my face heated up the night cream and it pooled around my nose and under my chin – I had no hanky and so made do with collecting the excess oil and redistributing it to my drier areas, pressing it on the backs of my hands and surreptitiously moisturising my ankles.

To cut a long story short, because the story doesn’t even end with washing the blasted stuff off – it lingered through two lots of cleansing balm and an acid peel – this is not the sort of product I want to use on a very hot day. And it’s absolutely boiling in the UK at the moment – many places are experiencing something of a heatwave! To which I say bring it on. 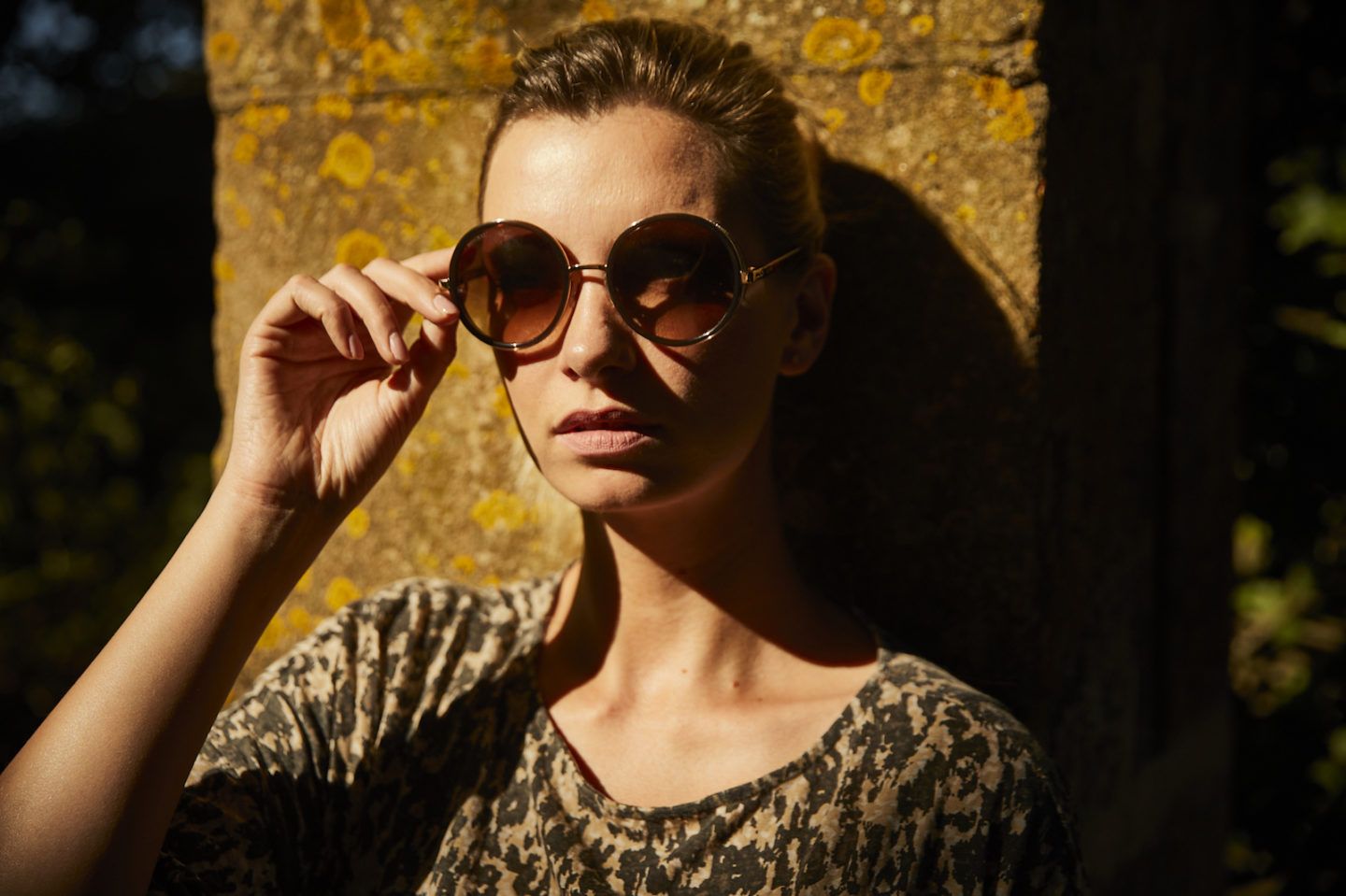 But heatwaves aren’t without their drawbacks, namely not being able to sleep at night (don’t have that problem because my house is basically a giant fridge – the are walls three feet thick and the stone floors are positively icy), having to remember to water the plants and – biggest drawback – not having the energy to do very much at all.

Simple tasks such as fetching a glass of water or putting on shoes become too much effort; even going to the loo gets postponed until you’re so desperate you trip over your own feet on the way to the bathroom. Work efficiency plummets, driving becomes dangerous as you scorch your arse on the seats and try to minimise contact with the steering wheel, dressing consists of finding the loosest thing you own and adding flip flops.

So forgive me if my beauty routine, mid-heatwave, is borderline slovenly. It has to come in a spray or a spritz or I’m not interested – I don’t want to have to rub, massage or otherwise manipulate my skin when I’m roasting hot, so creams are out. (Unless applied morning or night – I’m talking about the daytime hours, here: peak sun.)

The products below are the ones I took to Greece with me as part of my Ultimate Laziness Kit: 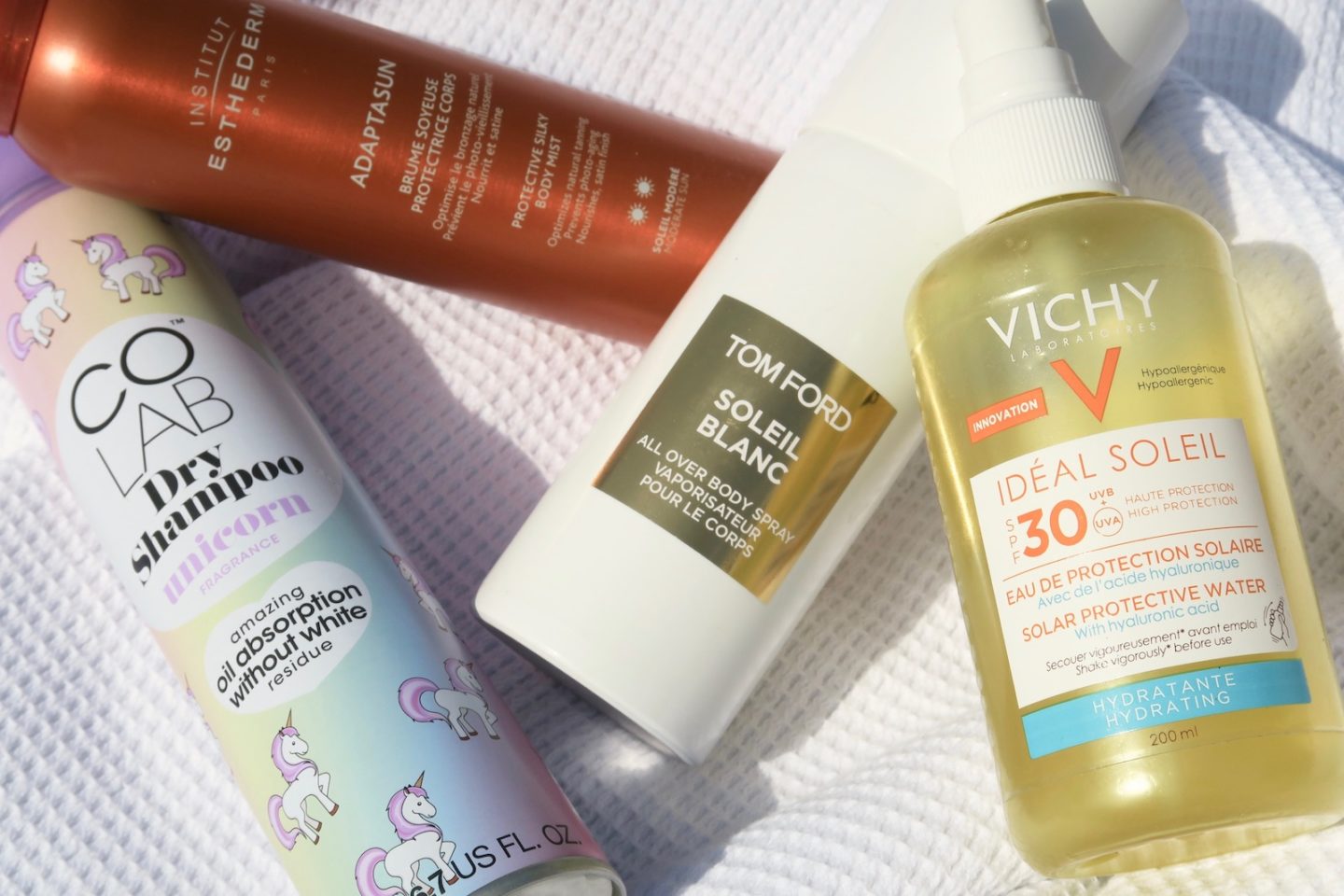 Colab Dry Shampoo (obviously, because I’m a founder of the brand and I use it religiously); I took Unicorn, but really it should have been Paradise (£3.49 here*) which smells like Bronze Goddess and is just lush in the extreme. 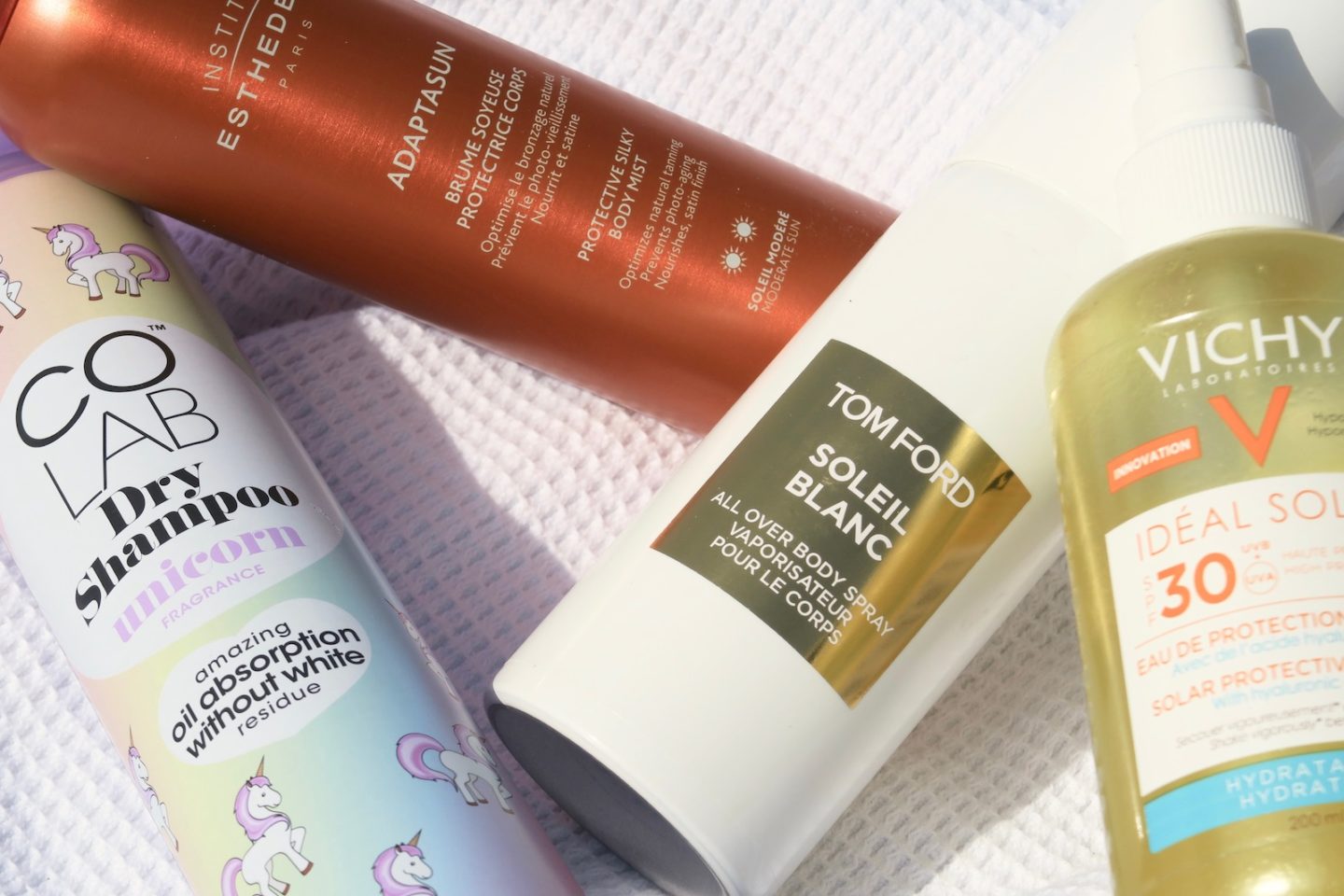 And it just so happens to go quite nicely with my holiday body spray of choice, Tom Ford’s Soleil Blanc (£45 here*) which saves me from packing a separate deodorant and perfume. It’s such a sexy scent (I’ve reviewed it before here) and, handily, it sort of smells better when you’re a bit hot and – er – sweaty. Which sounds gross, but I’ll just leave that thought on the table. 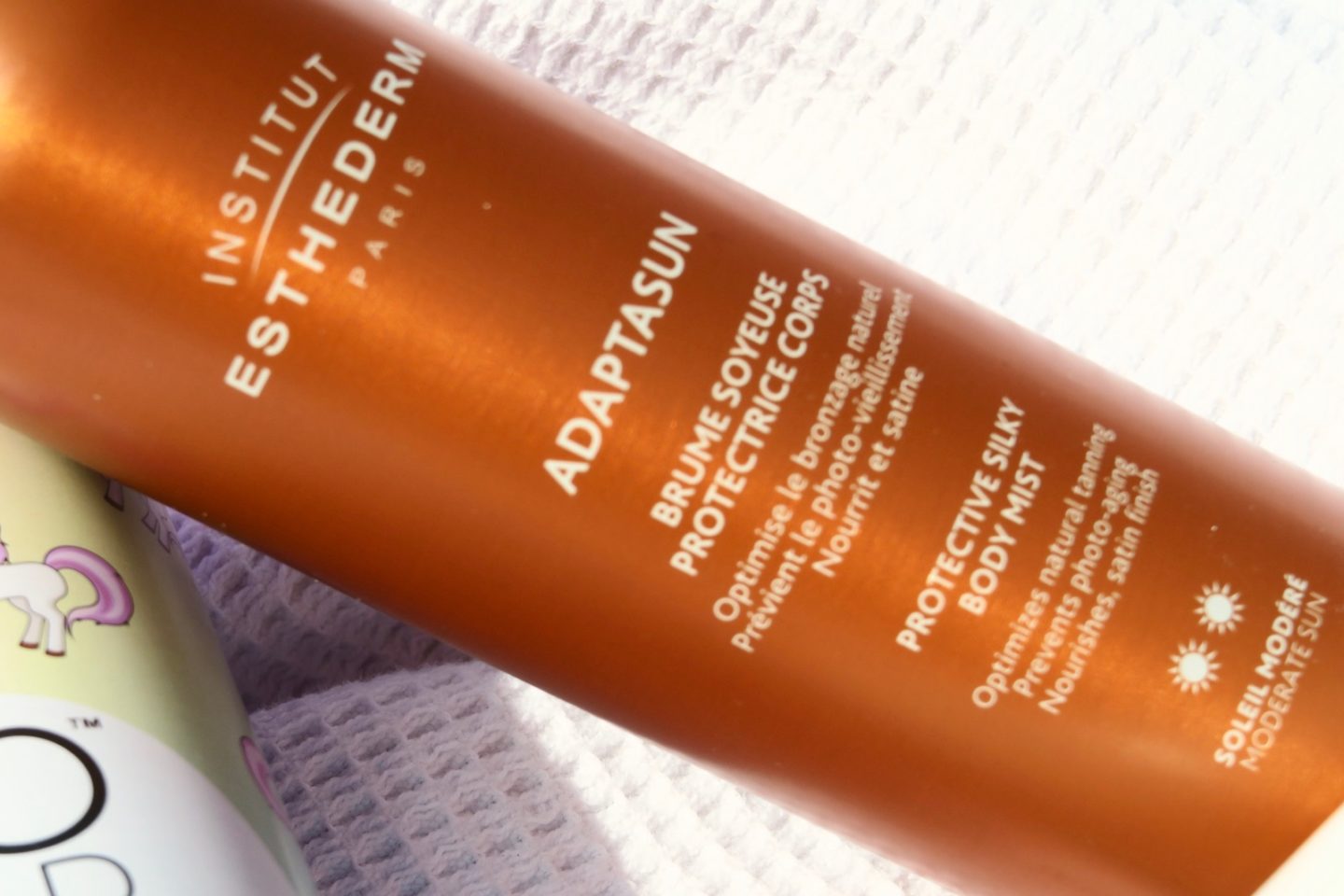 For a sunscreen top-up, you can’t get very much more convenient than the Adaptasun Silky Body Mist from Institut Esthederm (£39 here*). It’s very pricey, but I’ve long been a fan of Esthederm sun products because I seem to get such a beautiful sunkissed colour when I use them. I wish that their labelling was clearer (they have their own ratings system which I think is confusing to the average consumer) but still, I find their stuff a joy to use.

(Review coming up on the Coola Pina Colada spray, here*, which is also great and I’ve had no issues with burning despite it feeling so weightless. I’d make a point of saying that I usually use a heavier textured sunscreen cream or lotion in the morning, before sun exposure, and save the sprays for my top-ups, but used liberally I find most of the popular SPF sprays and mists to be very good.) 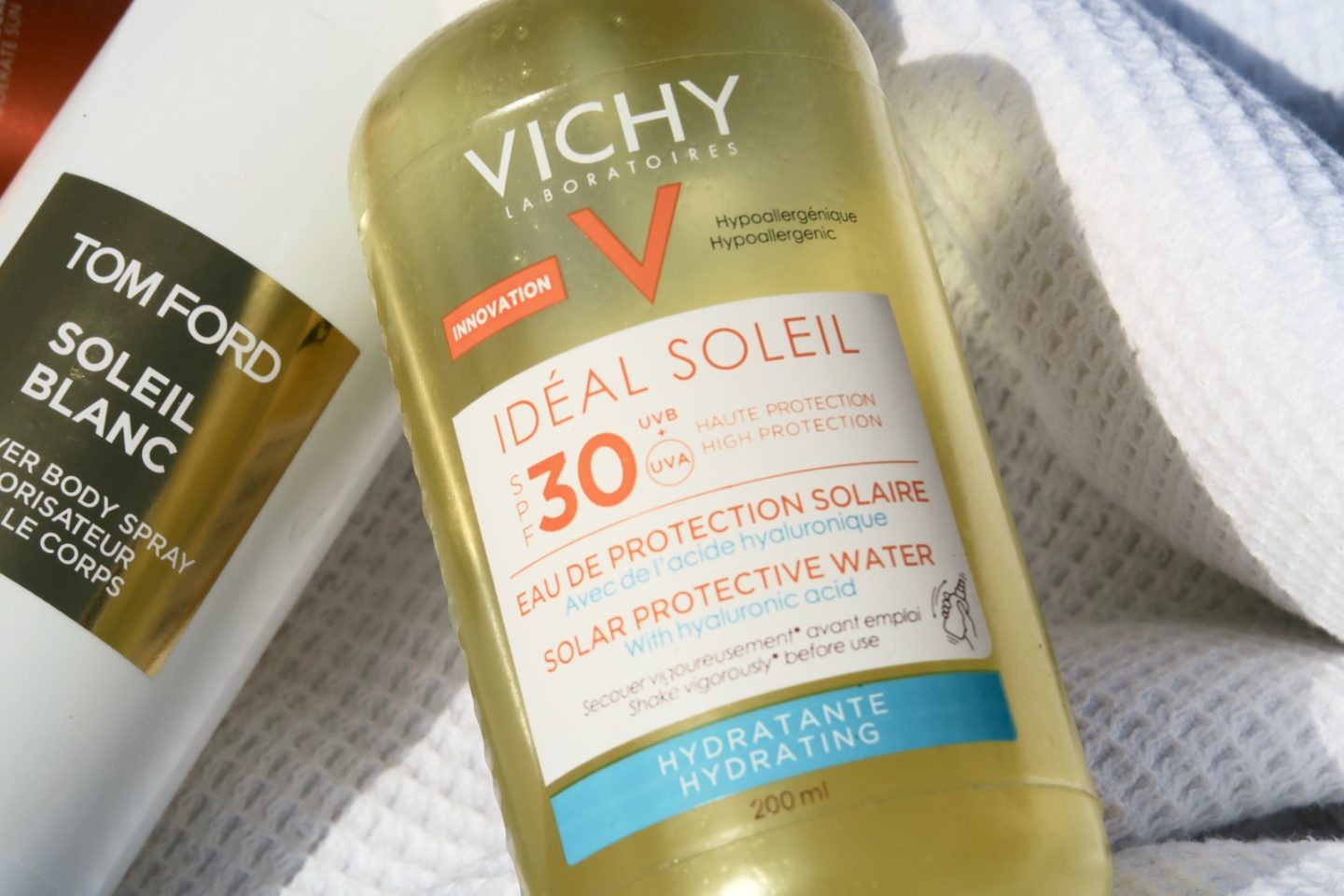 And another sunscreen spray – or more of a spritz: the Vichy Solar Protective Water. I reviewed the tan-enhancing version of this a while ago (post here) – it’s exemplary. Lightweight to the point you can barely feel it, easy to apply, great protection. I can’t rate it enough, really – it’s currently just over £16 at Escentual here*.

You can read all of my sunscreen reviews here and there’s a full post about my trip to Greece here, if you’d like to know about my adventures abroad with two toddlers. I must have been mad..