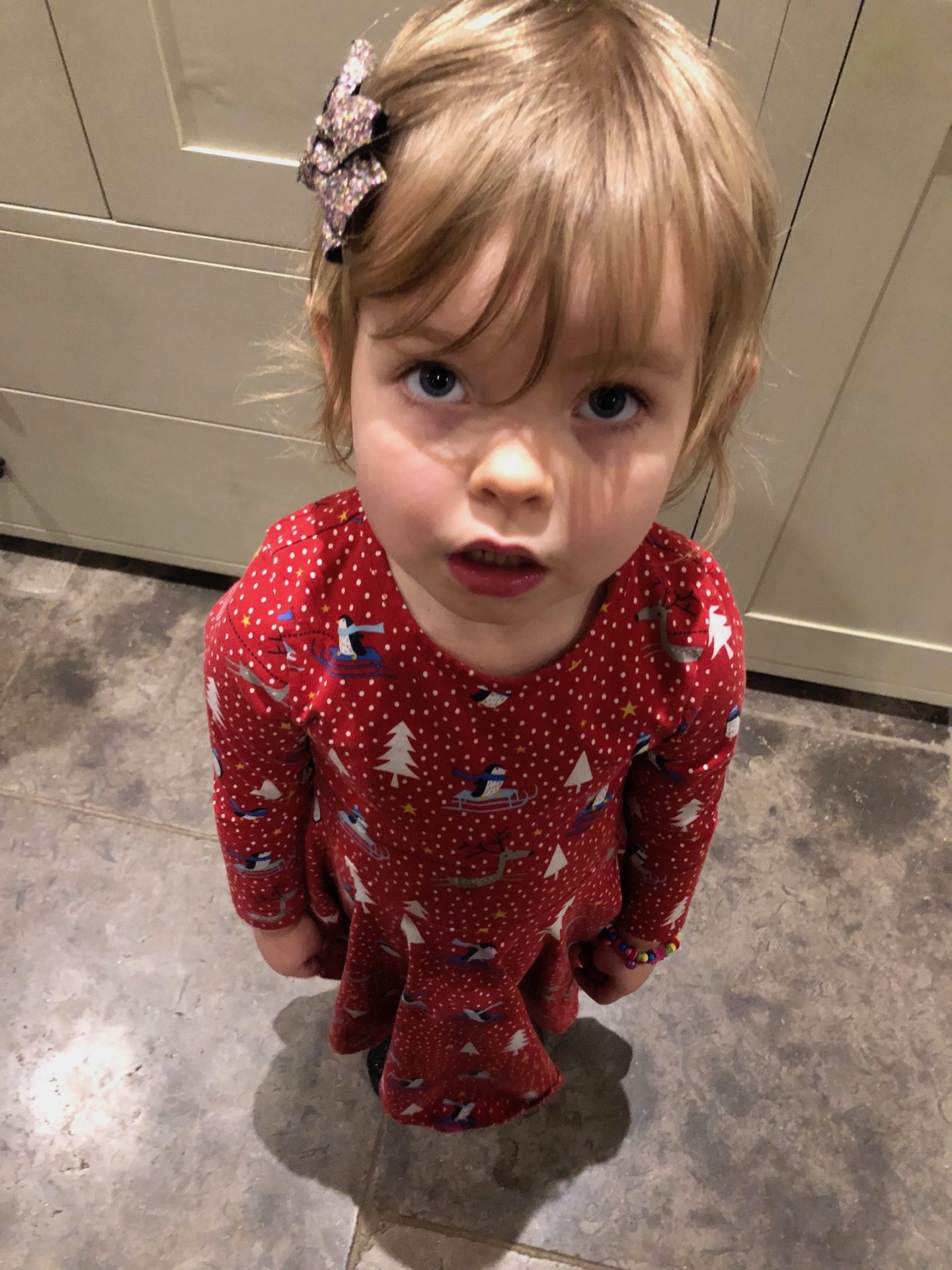 Angelica, aged three and eight months, has taken to telling us all precisely what she is not. We’ve had this before, when she first learnt her name – or a shortened version of her name; “I not hungry, Daddy, I La-La!” “I not cute, Granny, I La-La!” “I not testing your patience today Mummy, I am La-La.” But this is a different game, a year or so on, and I suppose it stems from her trying to constantly put her growing vocabulary into practice. It involves her drawing a comparison between herself and a (mostly inanimate) object and then rejecting the comparison and it usually happens when Ted is doing something vaguely annoying/violent to her.

For example, when Ted (two years and one month old) was trying to climb onto the same chair and using her as a pull-up support, she shouted “No Ted! Stop using me to steady yourself, I’m not a rope! I’m not a rope, Teddy!” 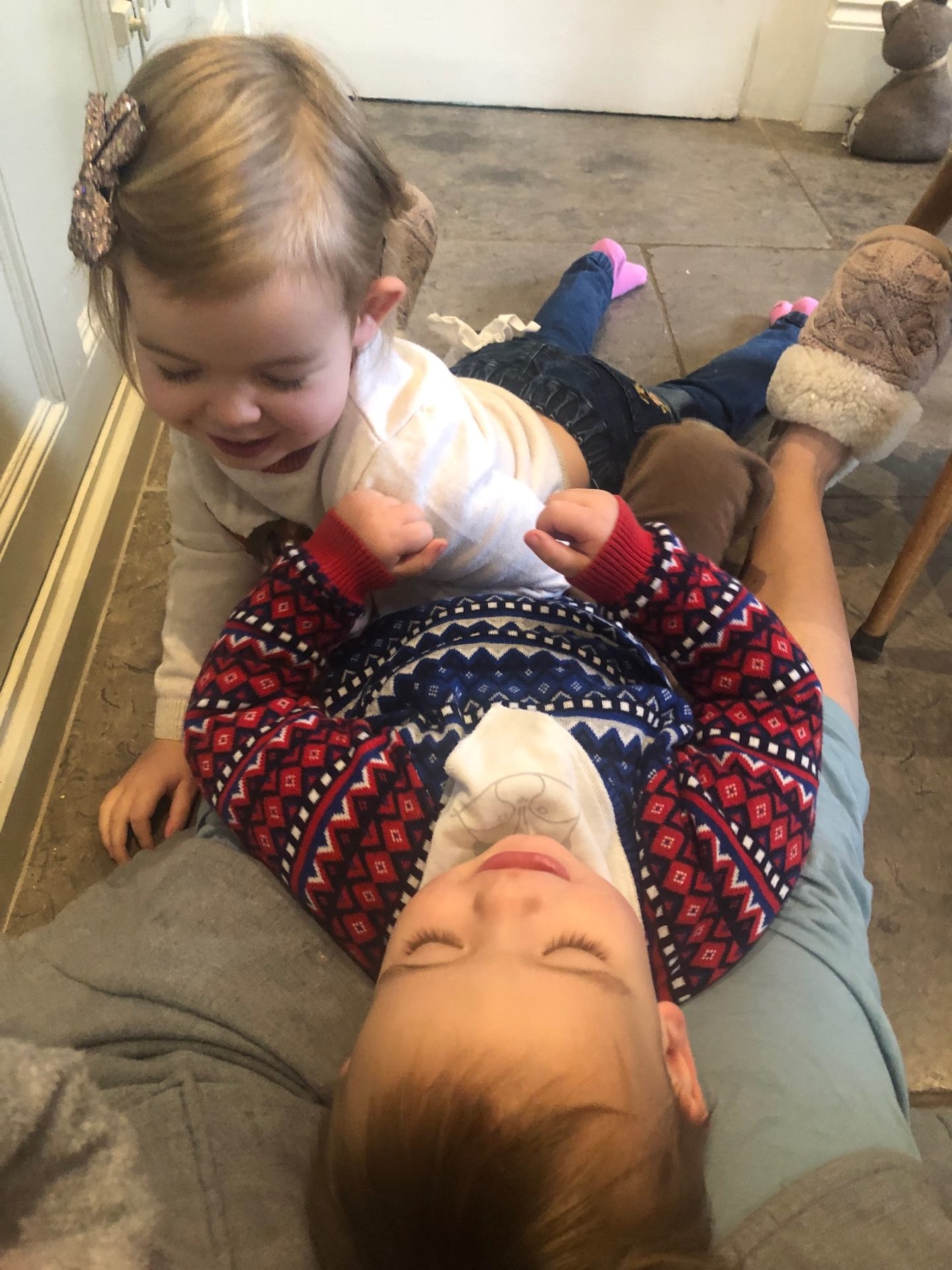 When he tried to put all of his dinosaurs into her nightie, “Stop, Ted – I’m not a pocket!” 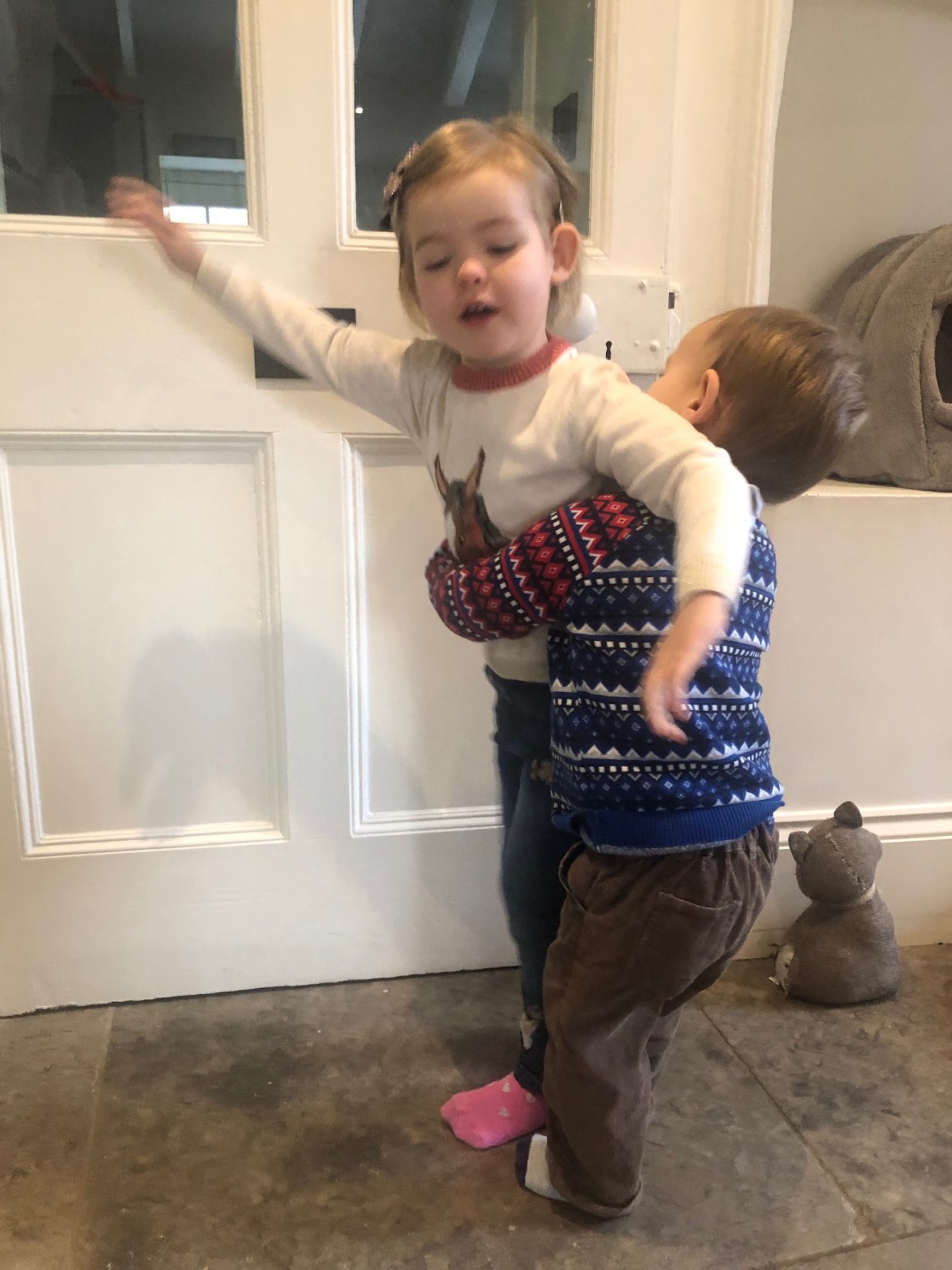 Anyway, the reason I’m telling you this anecdote, which is no doubt brain-shreddingly boring, because most anecdotes about other people’s children are brain-shreddingly boring, is that I feel as though I suddenly have an actual small person living in the house rather than a baby. I’m sure I’ve said that before – probably at the aforementioned “I La-La” stage, but recently it’s really hit home. She’s a fully-functioning little human with complex mind-games going on, able to reduce my brain to a twitching mass of useless jelly in the space of around eight minutes. I can have all of my wits about me one second, taking part in an important international conference call with one ear and using the other ear to decipher strange, toddler-on-the-loose sounds from the neighbouring room; but if I’m subjected to more than a few minutes of Small Child Interrogation then I just completely lose the plot.

“No, not now, I need my phone and you’ve already played one game today. Go and set up the dolly hotel and I’ll be in in a minute.”

“Oh please, Mummy. Please! Only one game for ONE MINUTE, I’ll be quick. Please Mummy! Please! Oh what? This is not the plan, Mummy. I don’t agree with this plan and I don’t like this plan…”

“You said yesterday that tomorrow I could have a game and now it’s tomorrow. Mummy please! PLEASE!”

Change of direction to take me off guard…

“Mummy where does fleece come from? Where does tables come from? Can I have a game? Can I have a cake?” “Mummy where does rice come from?” Repeat for seven or eight intense minutes at which point my head explodes and splatters the walls with bone fragments and gelatinous bits of stringy brain. (If that’s even a thing, I have no idea how brain matter behaves when exploded. I’d Google it but I don’t want to disappear down that particular wormhole.) 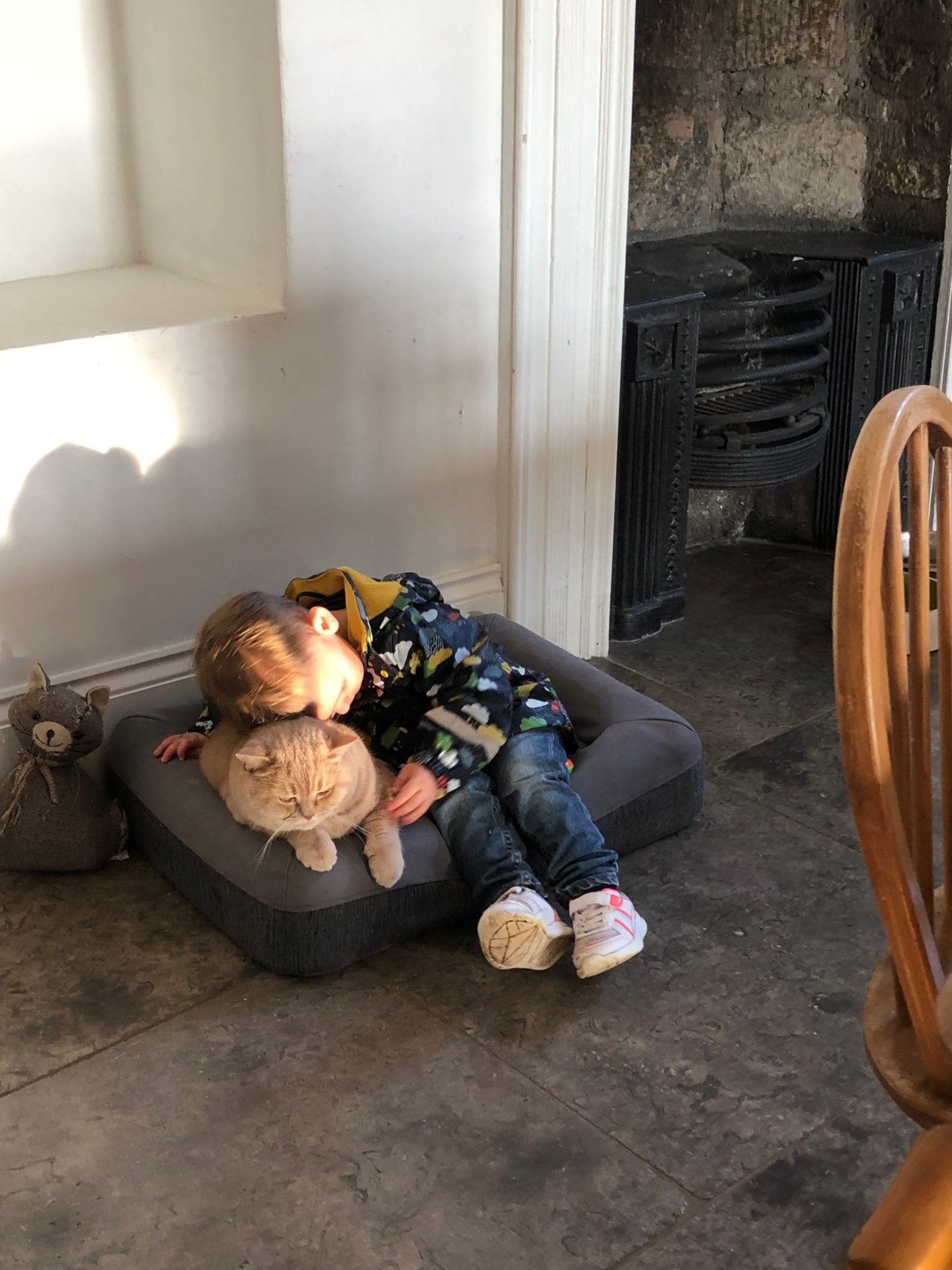 If Angelica has turned into the world’s most fist-bitingly persistent negotiator then Ted, since the last update, has morphed into a WWE wrestler complete with energetic roar and superhuman levels of strength. My gentle little toddler has started to launch himself from any and every surface he can climb up on, battlecrying as he hurls himself from the footstool, whooping as he attempts to mount the cat via a split-legged jump from the kitchen chair. It’s as though he turned two and someone flicked a switch.

Thank God the cuddles are still there. And kisses, too, although there’s so much slime that goes with a Ted kiss it’s hard not to flinch. It’s like being gunged. But so impromptu and so unprompted, who could refuse a gunging? Angelica now has to be virtually bribed in order to part with a kiss and cuddle so I’m taking all of the unconditional love whilst I can still get it. 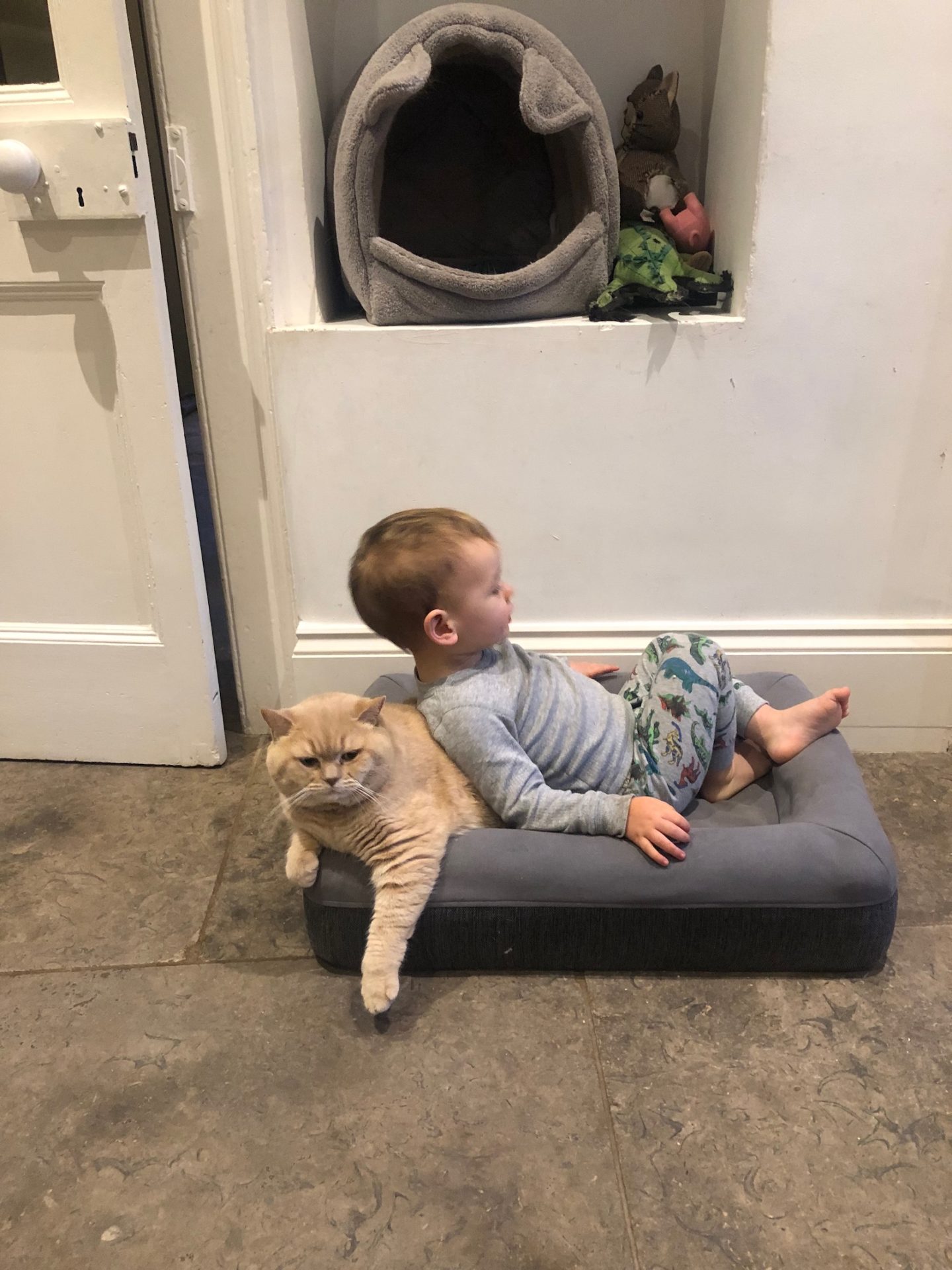 Oh, and I was horrified the other day to hear Angelica say the F word. Not THE F word, but the one that rhymes with Cart. I’m not by any means a prudish woman, but for some reason it has been drilled into me that F-rt (rhymes with cart) is a terrible, gross word. I think it was my Dad who started this and I actually rarely heard my brother or sister say it when we were little. I’m not sure they use the word now, even  – I’m trying to remember what we used to refer to them as and I have a sneaking suspicion that it was “blow offs”. In adult life I greatly amuse myself by calling them trumps or guffs (obviously I don’t do them, because I’m like the Queen, I’m talking about when I refer to other people’s) and I had come up with an entirely new phrase for Angelica that I was pretty proud of:

There’s something very Roald Dahl about bottom burp, isn’t there? It sounds nicer and more naive than any other word or phrase that describes the act of breaking wind and I was really happy with it. (You can use it, thank me later.) But it turns out that I was the naive one; how could I have thought that she would go to pre-school and not hear the f-cart word? It’s not as though it’s a swear word – people say it to their kids all the time.

Oh well. This is a small taste of things to come, I suppose – but it’s a terrible shock, the first moment you realise that your child is being influenced by the outside world and you have no control over it. Crikey. It makes me want to set up a home school and pull down all of the blinds. Except that I have no blinds and if I had to home school my kids I would end up sticking skewers through my ear holes by eleven o’ clock on the first day… You’d have to have the bloody patience of a saint! Imagine! I can barely survive a sticker session unless I’m able to secretly rearrange them afterwards – and colouring in when the crayon marks don’t sit properly within the lines makes me all kinds of itchy. 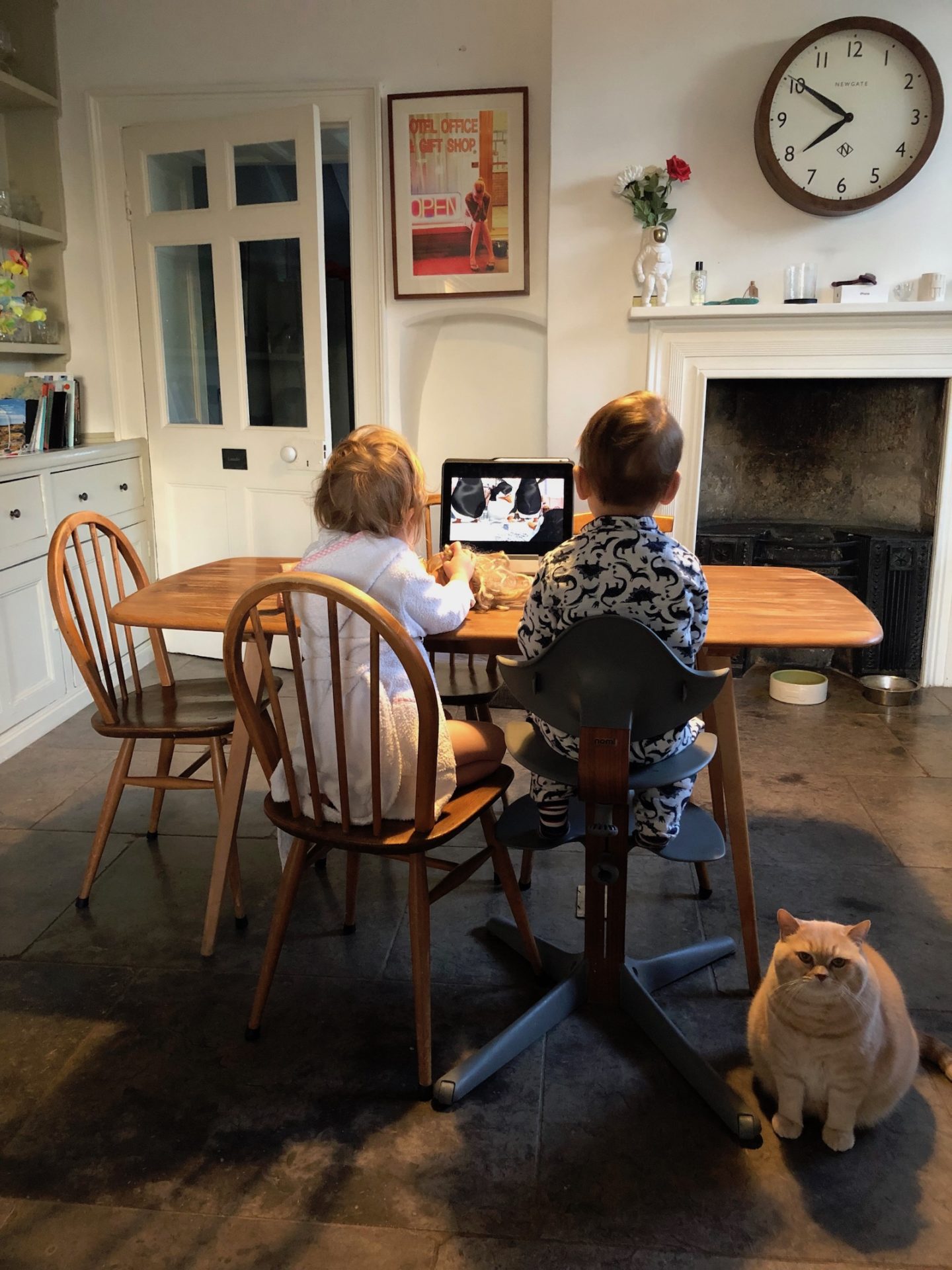 Also, the fact that I haven’t even thought past “stickers” and “colouring in” speaks volumes for how inadequate I would be as a teacher. Fun fact: I was about to do my interview to start a PGCE to be a primary school teacher when I decided, instead, to do a Masters in English and Creative Writing. Which was what kick-started this blog (I wanted to have somewhere to practice writing, but also loved talking about beauty) which is why I now sit here before you, spouting utter nonsense.

I also sit before you with the sort of honking cough that sounds like a sea lion being repeatedly squashed under a giant’s shoe, an old fashioned car horn, a comedy sound effect. It’s so utterly boring, this cough – it wakes me up at weird hours and has me spitting things into my water glass like a dying cowboy. It’s actually the reason I now have to go, because I’m writing this late at night and I don’t want to wake everyone up.

I had loads more to say about various life things, but it’s all a bit dismal because winter in the sticks is dismal and I don’t want to bring you all down. So I’ll save that for another post and bid you farewell until the next time I put pen to paper. Or clackety gel nails to keyboard.