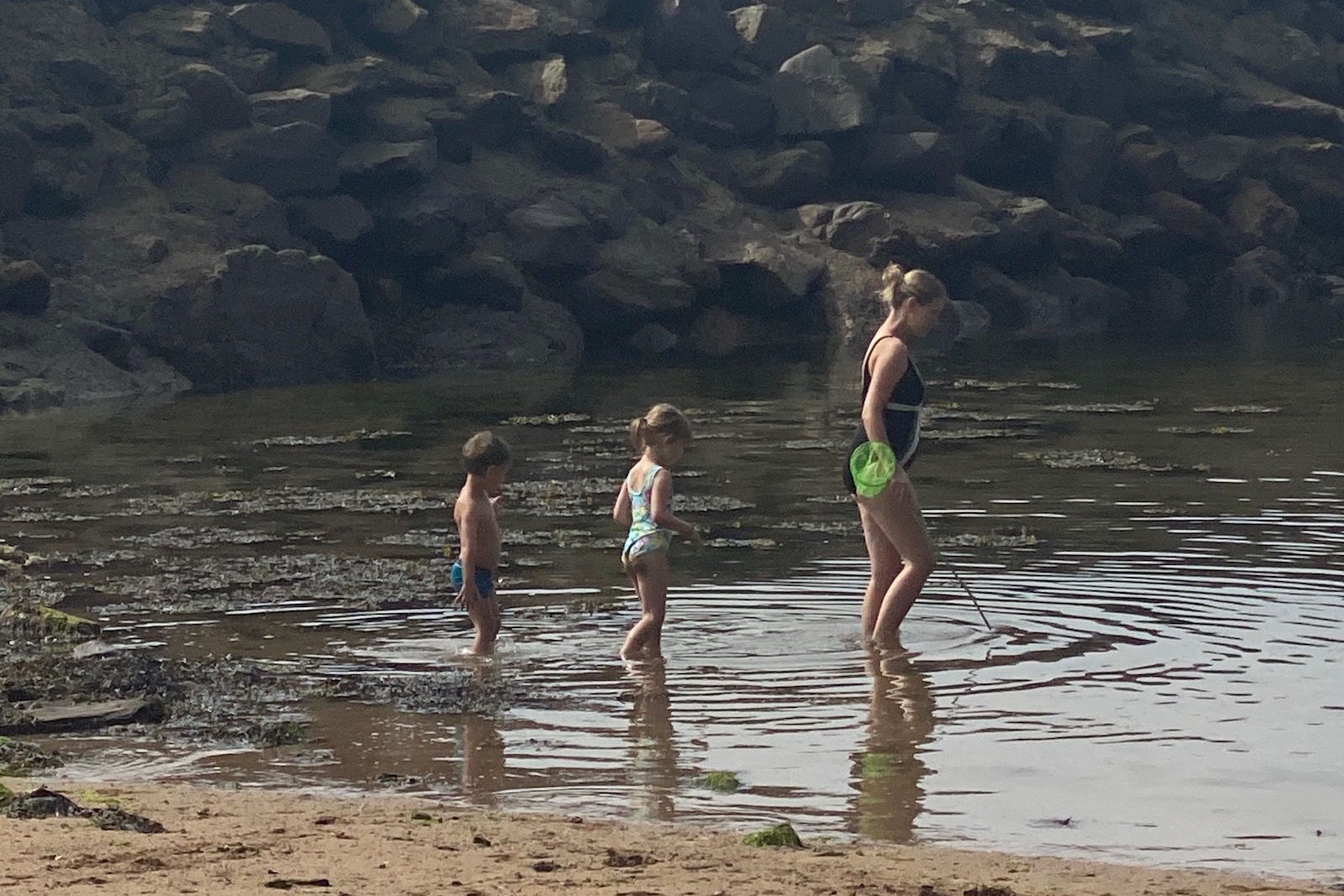 I had to pull a whole live tick out of my child’s face last week and I’ll be having nightmares for months. In fact if you have a phobia of insecty things, or if the idea of minor medical procedures being performed by a non-professional makes you edgy, then it’s probably best to skip this life update because things are going to get graphic.

I was actually going to write about our holiday to Cornwall for this life update, but reading about people’s non-exotic holidays is never that interesting, is it? They’re always a bit samey, because we all know what a grey day on a windy beach is like and that holidays with young kids are harder work than being at actual work and we’ve all nearly had to do a wee in an empty water bottle when we’ve been stuck in a traffic jam.

The same experiences are regurgitated, family after family – you could almost create a Great British Staycation clichés bingo card! “The weather was a mixed bag but it was nice to have some rainy indoors days, just to feel as though you didn’t have to be enjoying the outside.” Stamp the card. “When it was hot it felt just like abroad, didn’t it Brian?” Stamp. “Who needs Gran Canaria when the sun at home shines like this?” Stamp. “This ice-cream is the best I’ve tasted.” Stamp. “Why did they make the roads so narrow?” Stamp. “Why doesn’t he BLOODY WELL REVERSE INTO THE PASSING SPACE? THERE’S NOWHERE FOR US TO GO, MATE. THE TRAFFIC’S BACKED UP BEHIND US. NO YOU GO BACK – YOU – GO – BACK. BACKWARDS!”

I’ll tell you what wouldn’t be on your average staycation cliché bingo card, though, and that would be this: waking up to find that your five year-old daughter has what looks like an old Coco Pop stuck to her face, trying to pull the Coco Pop off, unsuccessfully, then realising that the Coco Pop has tiny black legs.

Honestly, it was like something from Alien II. Once I’d retrieved my glasses so that I could actually see properly, and shone the torch from my iPhone at the side of her head, I could see that my little girl didn’t have old cereal stuck to the side of her face at all; it was the back end of a well-fed tick.

Dear God I almost fainted from sheer, unadulterated disgust. The engorged body, the teeny legs…and the worst thing was this: that I could see its body and I could see its legs…but where was the head?

INSIDE HER FACE, THAT’S WHERE! If you don’t believe me then Google “ticks”. They bury their head parts into the flesh and the body stays outside. It’s like something from a horror movie. The ticks hide in long grass and ferns and undergrowth, which is basically where my kids are magnetically drawn to because they are attracted to anything dirty or dangerous, and then they (the ticks, not my kids) attach themselves to passing fleshy hosts and burrow their horrible little heads into the skin.

Oh, how my hands trembled as I fetched my tweezers. (Yes, I took tweezers on holiday: chin hairs don’t rest just because you do!) The feel of the little hard, crunchy body as I worked the tweezer blades towards my daughter’s soft, perfect skin, trying to unearth as much of the tick’s head as I could before carefully pulling the whole thing out.

Not to blow my own trumpet too much, but I was actually rather good at tick extraction. After getting over the initial fright, after recovering from the shock of there being an alien parasite feeding off my child’s face, I came over all practical, a bit like Doc Martin overcoming his blood phobia in times of great need, and basically I saved the day.

Once the tick was out, I wanted to smash it with a large stone on the beach to make sure that it was properly dead. But the kids wouldn’t let me – they are still at the stage where they see no difference between a fly and a kitten, a biting ant and a llama – and so I preserved it, at their request, within a folded piece of sellotape.

I wanted to explain to them that the sellotape method was a far crueller death. To be slowly suffocated inside your transparent plastic tomb, with four huge giants watching on…the stone on the beach would have been a blessing by comparison. I could almost see the regret on the tick’s face. His legs stuck fast in the sticky glue, his body quarter-filled with blood – he wouldn’t even die on a full stomach.

“What do you want for your last meal, Tick?”

“One course. This is death row, Tick, not Claridges.”

“In that case, I’d like a full body’s worth of child blood. And then if it pleases His Honour, a quick and dignified death. Perhaps a singular hammer blow? A brick thrown atop my prone body?”

“I’ll see what I can do, Tick. Most likely you’ll get a few hours of quality blood-feeding before you’re rudely plucked off. And I can’t guarantee you any dignity – sometimes it’s a drowning in a teacup, other times it’s death by starvation on a petri dish, watched by many through the lens of a microscope.”

“Well,” says Tick, “we must endure, we must endure. Such is the life I signed up for! Now could I trouble you for a change of the chamber pot?”

Anyway, tick removed, children calmed, we left the tick, which looked as though it had been accidentally run through the world’s smallest laminating machine, next to the kettle in our rented holiday flat. And forgot to take it away with us. So that’ll be a nice surprise for the next paying guests, a dead tick in a piece of sellotape. We also lost the window-opening key, which means they’ll absolutely bake in there, especially if there’s a heatwave, but at least they can spend some of their sweaty time examining a real-life miniature vampire, entombed in his see-through casket.

Disclaimer, because obviously this story involves a child and everyone gets incredibly hot under the collar when it comes to small people: yes I researched how to remove the tick properly, yes I washed the tweezers before I plucked my chin hairs the next day, yes I know to keep an eye out for signs of Lyme disease. Actually that last one is quite serious, but thankfully rare, so I’ll be vigilant but not obsessive and I don’t need any scary anecdotal material, thanks ever so!

The rest of the holiday was quite uneventful, other than the dog nearly killing himself by eating a stomachful of sand (emergency vet trip, almost the same cost as the entire holiday) and the five year-old (again) nearly standing on a jellyfish. Throw in the dog projectile vomming on a moody neighbour’s doormat, the three year-old refusing to sleep and me forgetting to buy any food and overall it was a pretty fine time.