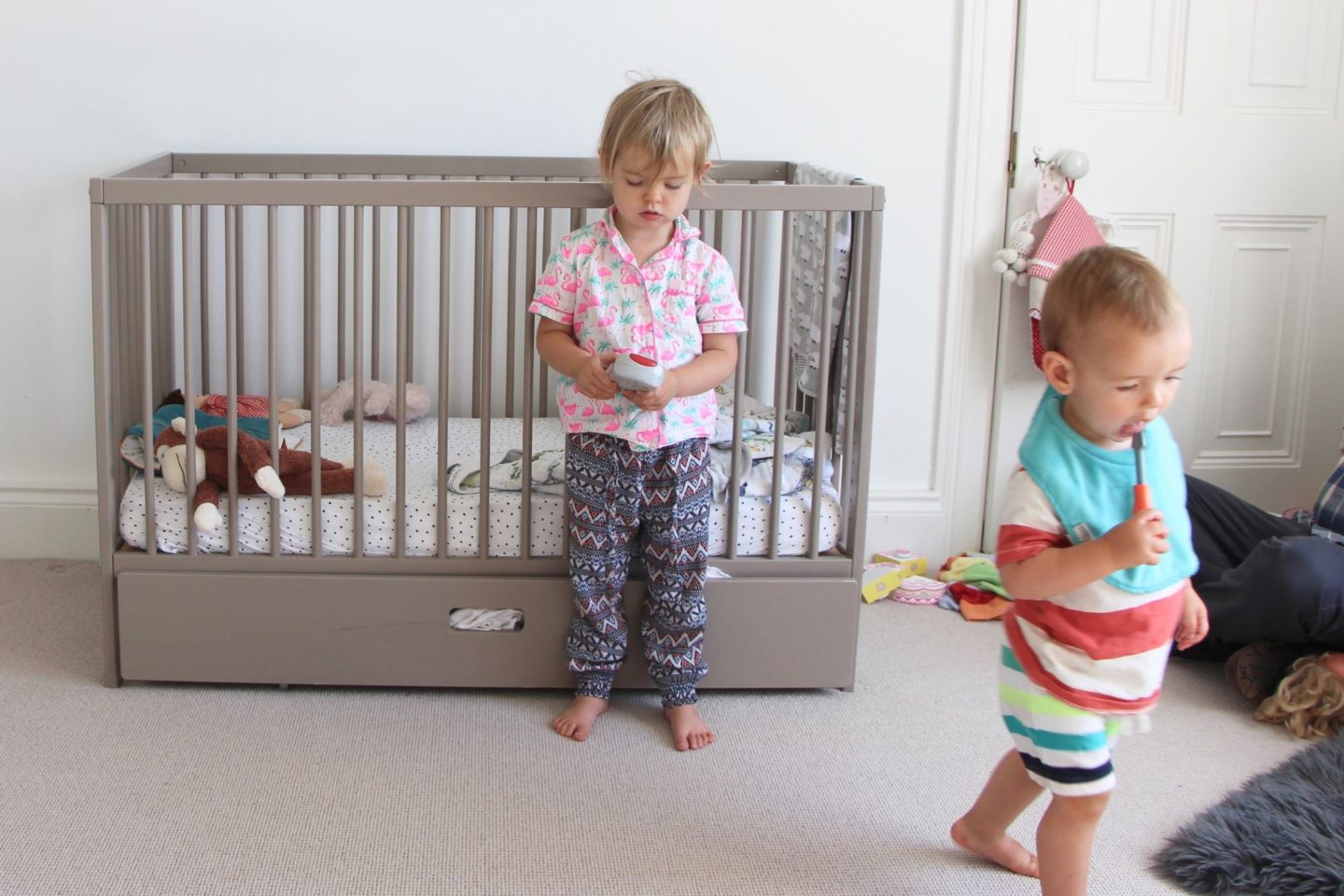 This month has been dominated, both emotionally and practically, by the arrival of Angelica’s Big Girl Bed. It has taken up a lot of time, this Big Girl Bed; first, choosing it (I was torn between buying an antique and getting a new one), then working out what else we needed to go with it (any excuse to spend ages on interiors websites) and finally, once the huge package arrived, putting it together.

I realise that three is probably quite late to be putting a child into a proper bed (is it?), but I’m afraid we were in a good place with the cot and we simply couldn’t let it go. It had bars, you see, which meant that once Angelica was in bed, that was it for the night. Not that she ever tried to escape – which was probably why the cot lasted so long – but we didn’t have to worry that she was galavanting about upstairs whilst we were watching Game of Thrones. She was happy with the cot, so were we. 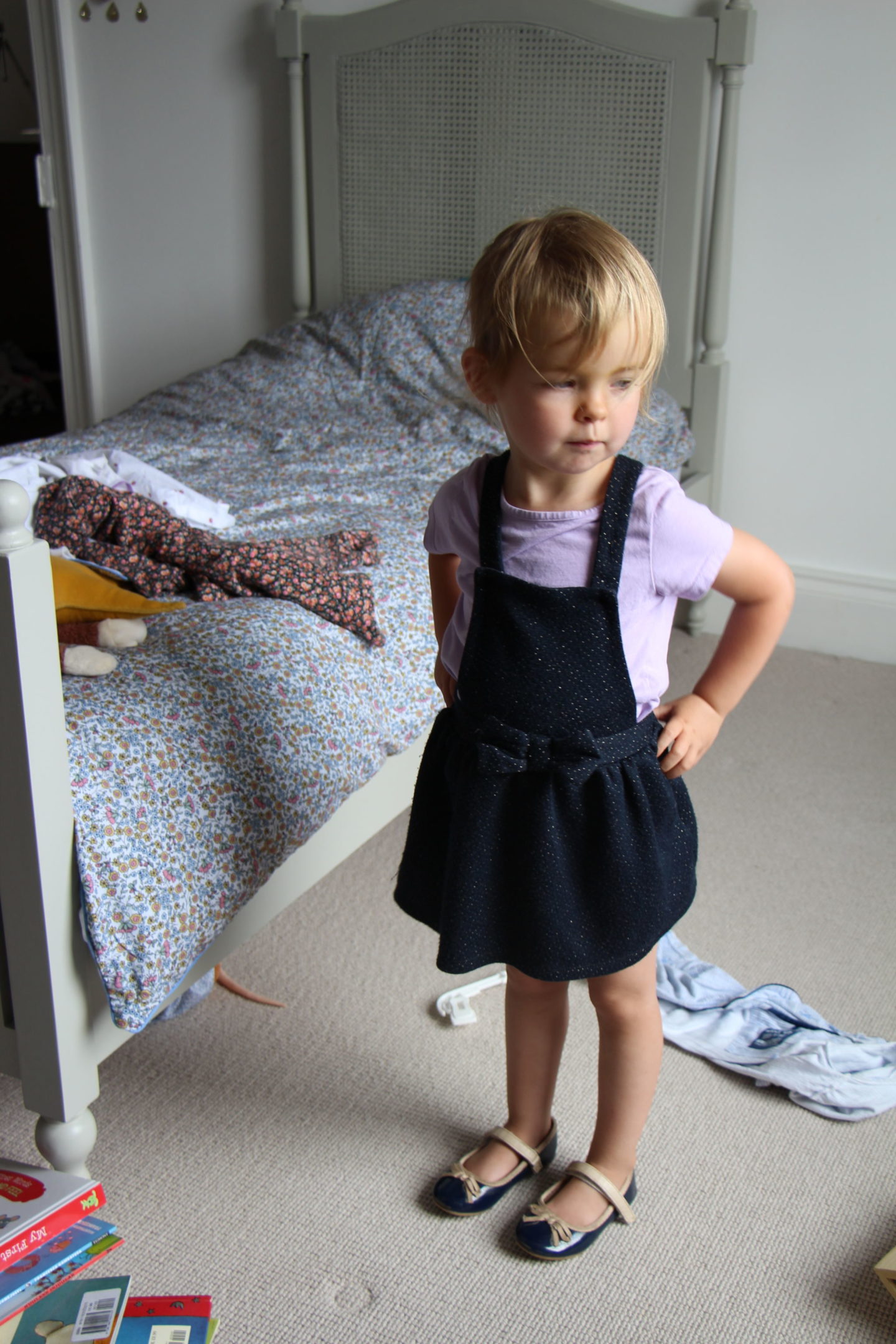 But all good things must come to an end, and so last Saturday the little cot was taken down (after spending eight thousand hours looking for the right allen key) and the new White Company bed was put together. I went for the Provence* single bed, because it was on sale and also it was almost identical to an antique one I’d seen. Except that it didn’t have the “past minor case of woodworm”, the “rickety join between headboard and side rail” or the “slightly torn rattan segment at the foot”. (Love vintage and antique stuff, but when you’re sleeping in it, you tend to want it to hold together.)

I digress; the cot went out and the new bed came in and I had to slip into the airing cupboard of claustrophobic nightmares to have a bit of a sob. (I rarely seem to be able to cry “a little bit” anymore – I hold it all together and then the dam bursts and I am left prostrate with seemingly inconsolable grief.) Where has my baby gone? I wailed, as Mr AMR shouted to ask me where the screwdriver was for about the seventieth time. I remember the day I first put her into the cot, I thought, as I buried my sobs into a stack of mismatched towels, she was so tiny! Six months old! 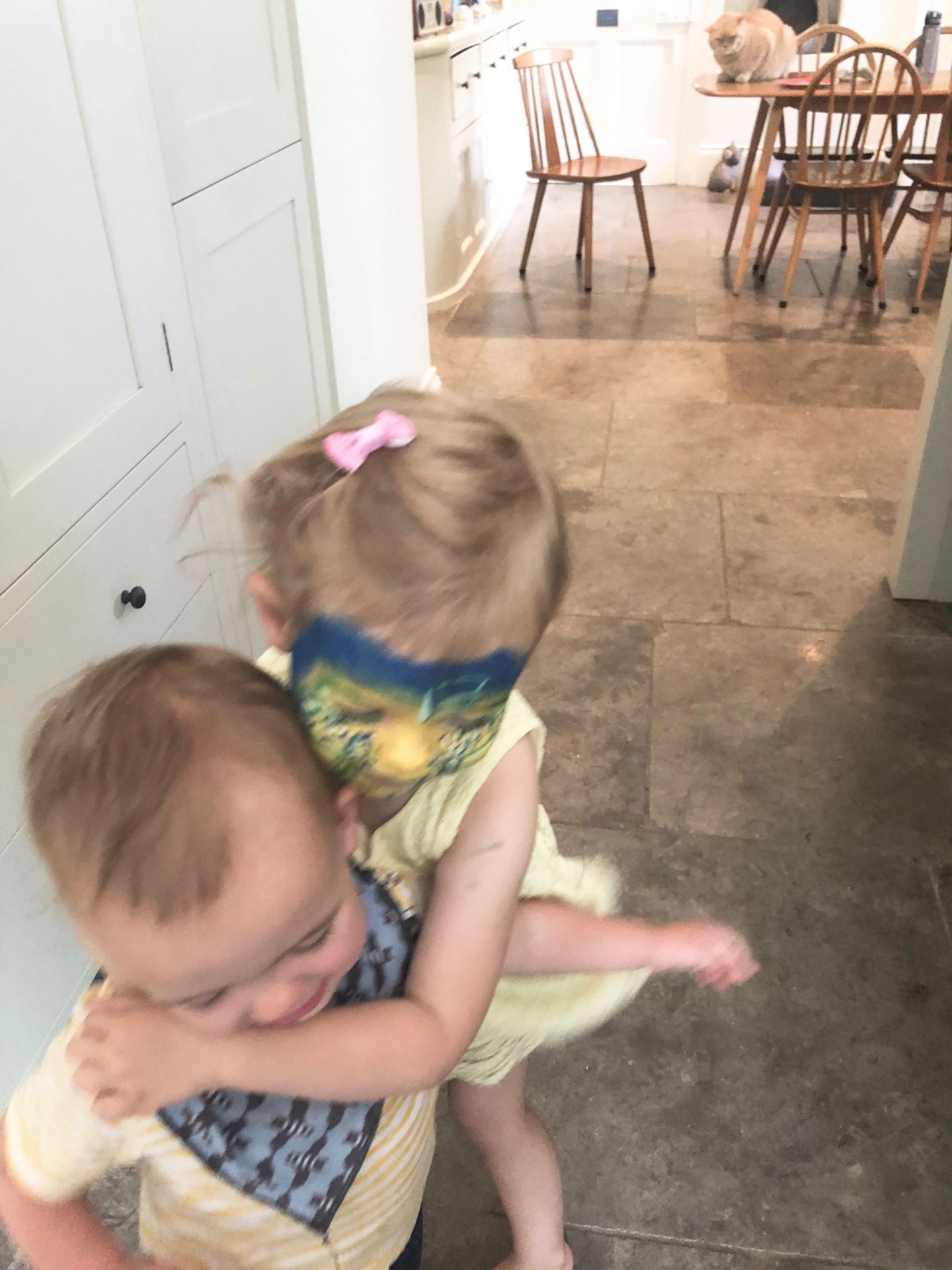 Ugh. Is parenthood always this relentlessly emotional? We also had a trip to the nursery so that Angelica could meet her new friends – she starts in September for two days a week – and I had to put my sunglasses on the minute we got through the door because I had welled up and the tears were threatening to spill over.

“I hang my coat on these hooks Mummy?” said Angelica. “Like Goat?” (Goat is from a book called Goat Goes to Playgroup. It’s a page-turner.)

“Yes,” I croaked, “you’ll hang your little coat up there and go into school!”

Oh my heart. So anyway, I stuck my sunglasses on and must have looked like a) I had a medical problem with my eyes or b) a total knob. I can’t bear it when people wear sunglasses inappropriately (like in the house, when you’re trying to speak to them, and when it’s winter for God’s sake!) and so you can imagine how much it pained me to keep them on. I only pulled myself together when I leant on a table and accidentally stuck my elbow into a tray of red paint – it’s amazing how a minor crisis can distract you from your own thoughts.

The worst thing about the Big Girl Bed scenario was that Angelica kept crying – “don’t take away little bed!”  and in my ridiculous, over-active imagination, the cot became a sort of physical embodiment of her babyhood. There were Angelica’s baby years, all of those milestones and gorgeous memories, standing in pieces on the landing, ready to be stored in the shed. 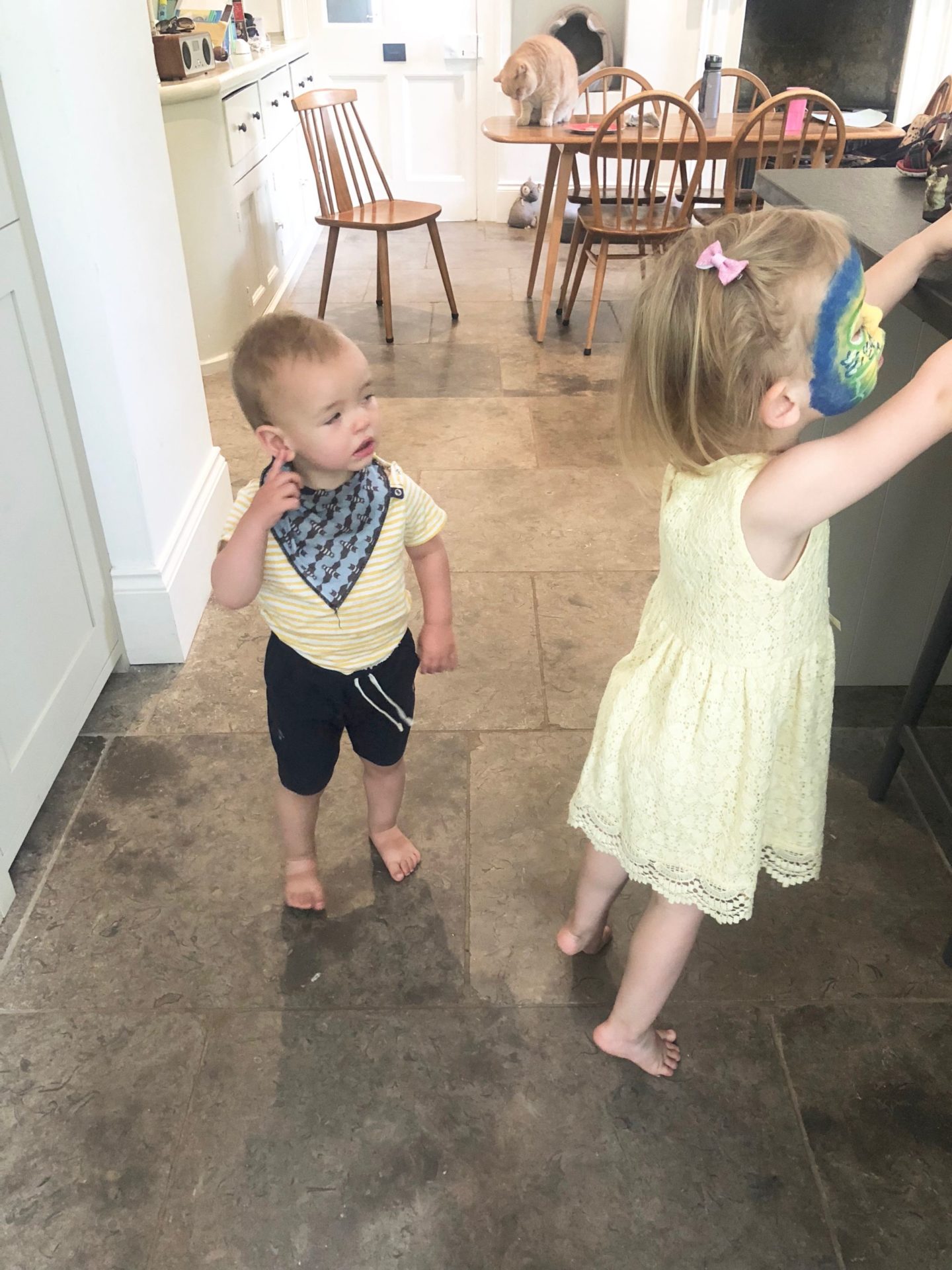 What’s Ted been doing this month? Nothing tear-jerking, which is nice. I’m just about done in, emotionally. He’s eighteen months today and he mostly spends his time throwing his food around dramatically – he sits in his high chair and swipes his hands across the tray from side to side, sending his rice/pasta/cereal/bread flying around the kitchen. Needless to say that Dexter the dog loves him.

Ted has a strange way of feeding himself, if I had to describe it in one word I’d have to say “Desperation”. He squashes everything he can possibly manage into his mouth for around thirty seconds, easily devouring over half of his total meal amount, and then he spends a few minutes processing it and chewing it down. He’s like a demented contestant on Supermarket Sweep, packing his trolley in an absolute frenzy.

He also gets quite panicked when he starts to smell food and it doesn’t immediately appear – you have to keep him as far away as possible when you’re cooking otherwise he clings to your legs until you drop morsels into his mouth like a baby bird. I’m like a constant snack-provider; dried mango, slithers of ham, lumps of cheese, bits of toast and jam, I’m forever preparing miniature food items, like a caterer for gnomes.

Ted has started to say quite a few words, though it’s sporadic and he absolutely will not perform on demand. Ask him to say “moo” or “dada” or “bath” and he will clamp his lips together and stare at you blankly until you go away and leave him alone. Left to his own devices, he chatters and hums and babbles away and has a grand old time of it.

Oh, and he has started to love books. A real definite change in the last week or so, I think he’s having a huge developmental leap or something. One day he was a baby dribbling food down his bib, the next day he’s plotting to take over the world, poring over his paperbacks. Although so far he’s only really interested in the farm book because it plays Old McDonald on a loop in a tinny, annoying manner.

Ted has also been going through a clumsy stage where he walks straight into doorframes and trips over thin air. And then gets really cross about it. It’s like being in charge of a tiny drunk man who alternates between loving you unconditionally and hating the sight of you. He’s like a tiny drunk man who can’t remember whether he wants a kebab, which is in one direction, or the bus stop, which is in the other. And whilst trying to decide, he likes to lie down a lot, sometimes in the middle of the road. Often he stands on things that just should never be stood on – boxes made from paper, the edges of duvets that have no bed supporting them – and now and then he likes put his hands into drawers and then lean on them so that he traps his fingers painfully. After a short, intense cry, he likes to brush himself off and try it all again.

Argh, my other baby! Not even a baby. Toddling and saying “book” and eating cereal with a spoon – it seems like yesterday I was lugging him about on the London Underground, breastfeeding awkwardly on the tube and trying to find stations that had lifts in them. Do I miss those days, or am I glad that they’re over? Were they fun, or simply difficult? It’s amazing how quickly your mind readjusts and smoothes over and carries on… 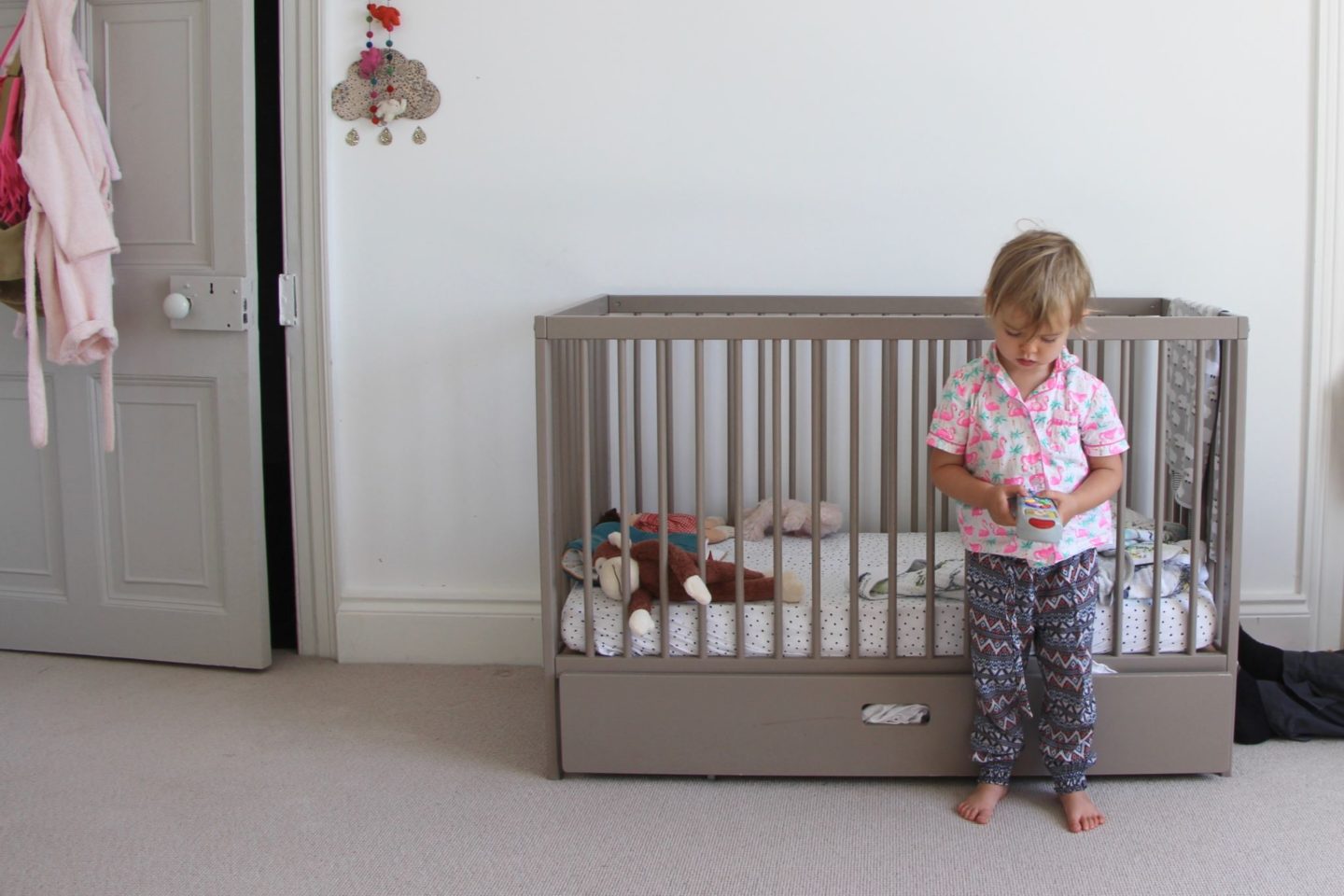 Why am I so silly and overly-sentimental about things? I think I’m trying to get to grips with not having a baby to look after – Ted is becoming more and more independent and there’s no proper cuddle-cuddle time going on. Not like there was before. In one way it’s lovely – I have my arms back! – but trying to adjust to not being needed to much is weird. It’s hard to know who I was before all of the baby years started, and they’ve flown by so fast – it’ll be four years in September since I fell pregnant with Angelica, so four years since I’ve really felt “normal” in my body and had uninterrupted sleep. Where do I go from here? Who am I? A woman who bursts into tears when she’s driving because so many songs remind her of her Dad, who fills her pockets with jelly beans (new vice) so that she can squirrel-nibble on them throughout particularly trying periods of the day, a woman who still feels as much of a girl as she did when she was fourteen and wondered, I wonder what it will feel like to be SIXTEEN? Twenty-three years later and I still have no idea.