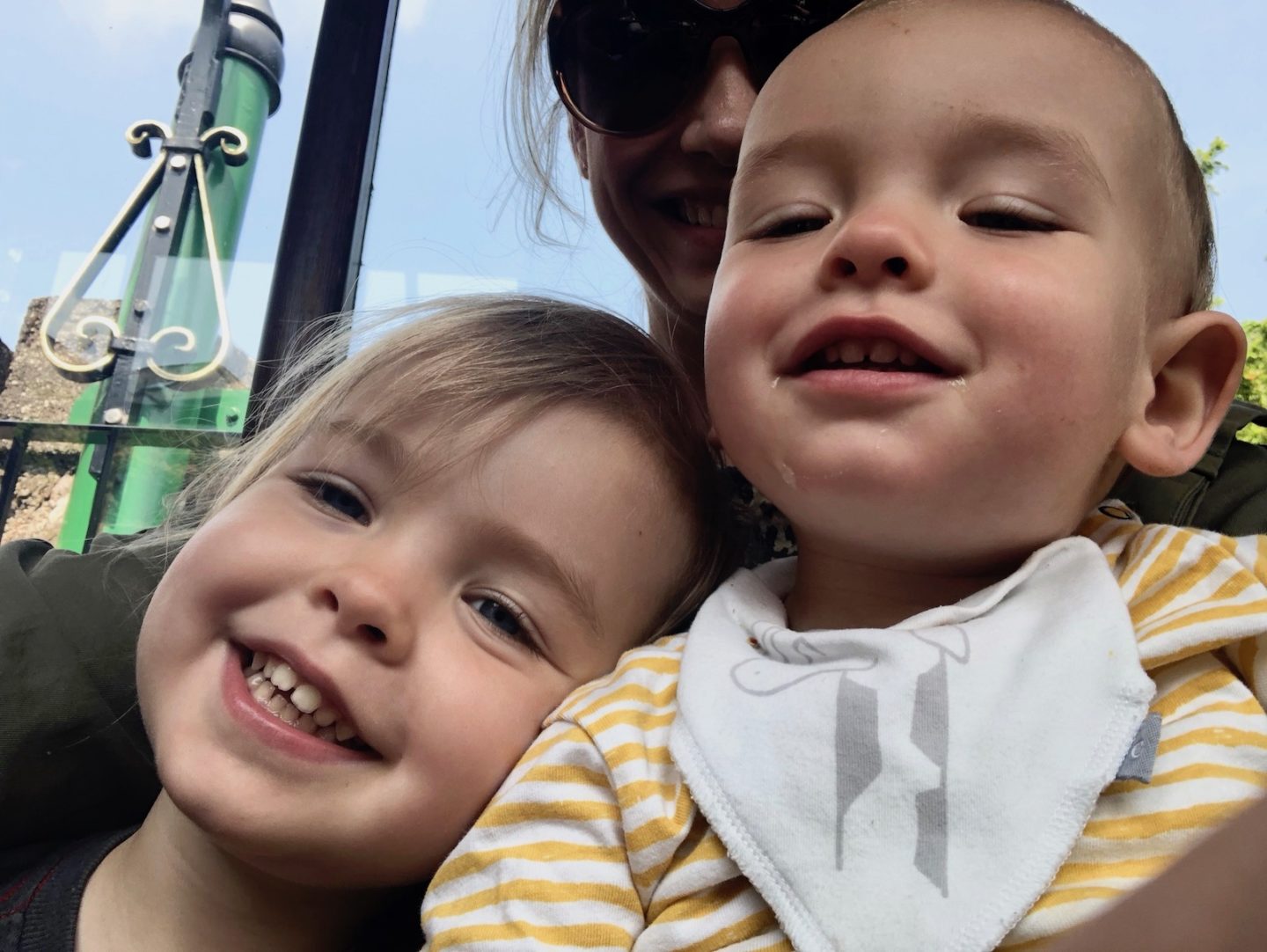 I’m still very much undecided as to whether holidays abroad with babies and toddlers are a good idea. There are so many considerations, so many logistical problems and non-relaxing hurdles to jump over. Trying to get through airport security with two cartons of milk and an unmarked medicine bottle (it was antibiotics, the label had fallen off!); running from the boarding gate with a toddler who suddenly needs a poo so desperately “it’s already coming out Mummy!” we can’t possibly wait until we get to the plane;  sitting in a confined space – a flying tin can, no less – with a baby who wants to do nothing but run. All of this (and the “please leave your folded pushchair on the tarmac” scenario) before you’ve even arrived at your hot, unfamiliar destination.

Driving to the south of France, or even Italy, would take us approximately eighty-four years.

Where was I? Staycation. Good God, is it not the world’s biggest advantage to be able to pack everything into the boot of the car (as well as every footwell and the space between the kids on the back seat and also the tiny gap under your own seat and also the glovebox) and then just set off? 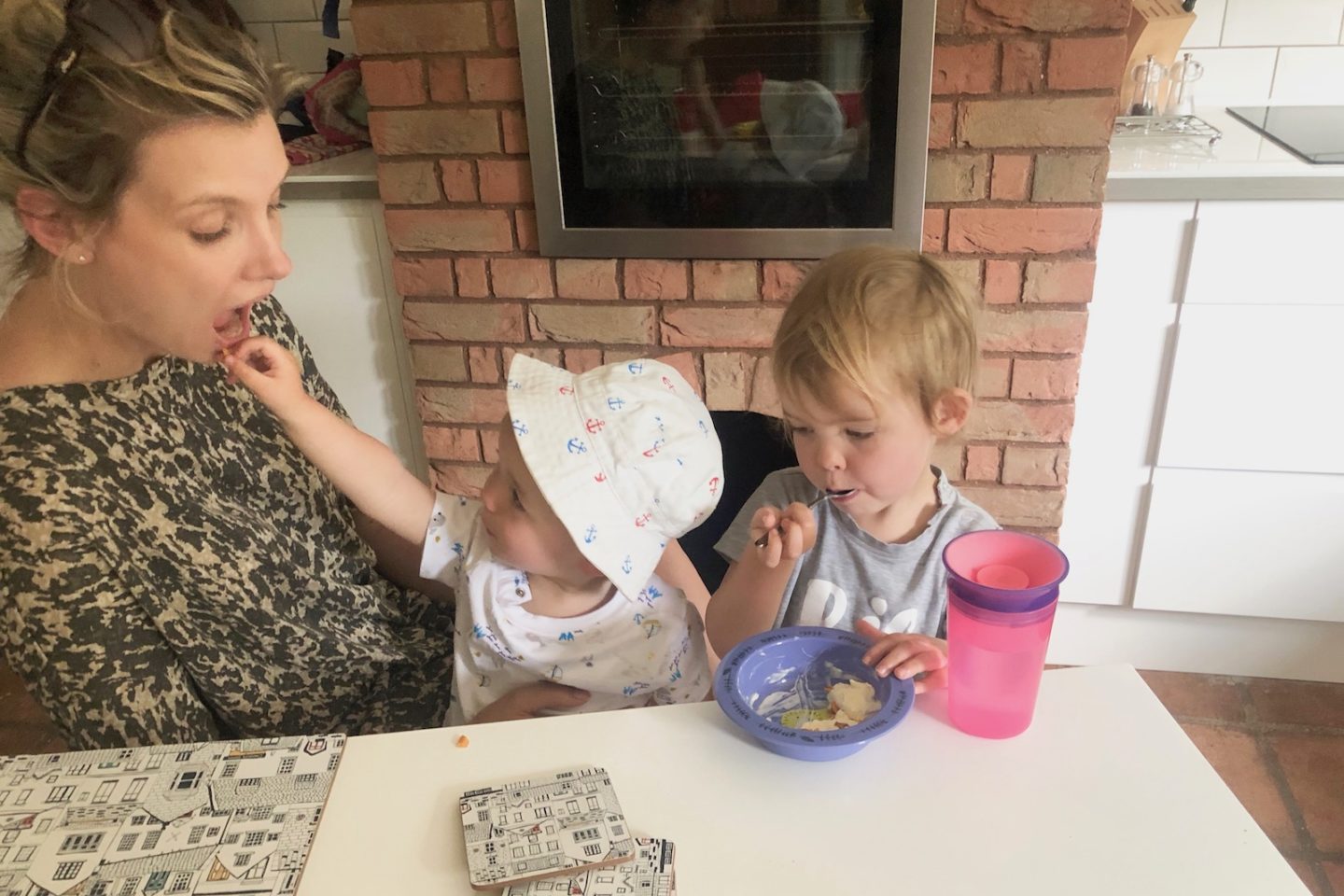 This is exactly what we did a few weeks after returning from Greece, keen as I was to compare an abroad holiday with a Great British Seaside sort of holiday. We were invited by Beach Retreats – a company specialising in self-catering beach holidays in Cornwall – to test out the latest property to launch on their website. And I thought that it would be a brilliant opportunity to compile my thorough and exhaustive Holidays With Kids: Home or Away? list, which is coming up. (To that end, does anyone have anything to wade in with on the pros and cons of holidays abroad with kids? Or even holidays in your home country? I’m trying to make an unbiased case, complete with anecdotal material, so that we can give parents of babies and toddlers a definitive answer to that age-old question: should we take our three under three to Barbados/Spain/Portugal? Is it worth taking kids to anywhere as posh as St Barts? delete as applicable.)

Most of the holiday homes at Beach Retreats are – unsurprisingly – on the beach. Many are directly next to the sea – metres from the sand. The newest pad on their books, Wychwood Lodge, is not right on the beach but you can walk there in around  forty minutes, down a lovely rural pathway through wooded areas and past fields of horses and cows. It’s no hardship. 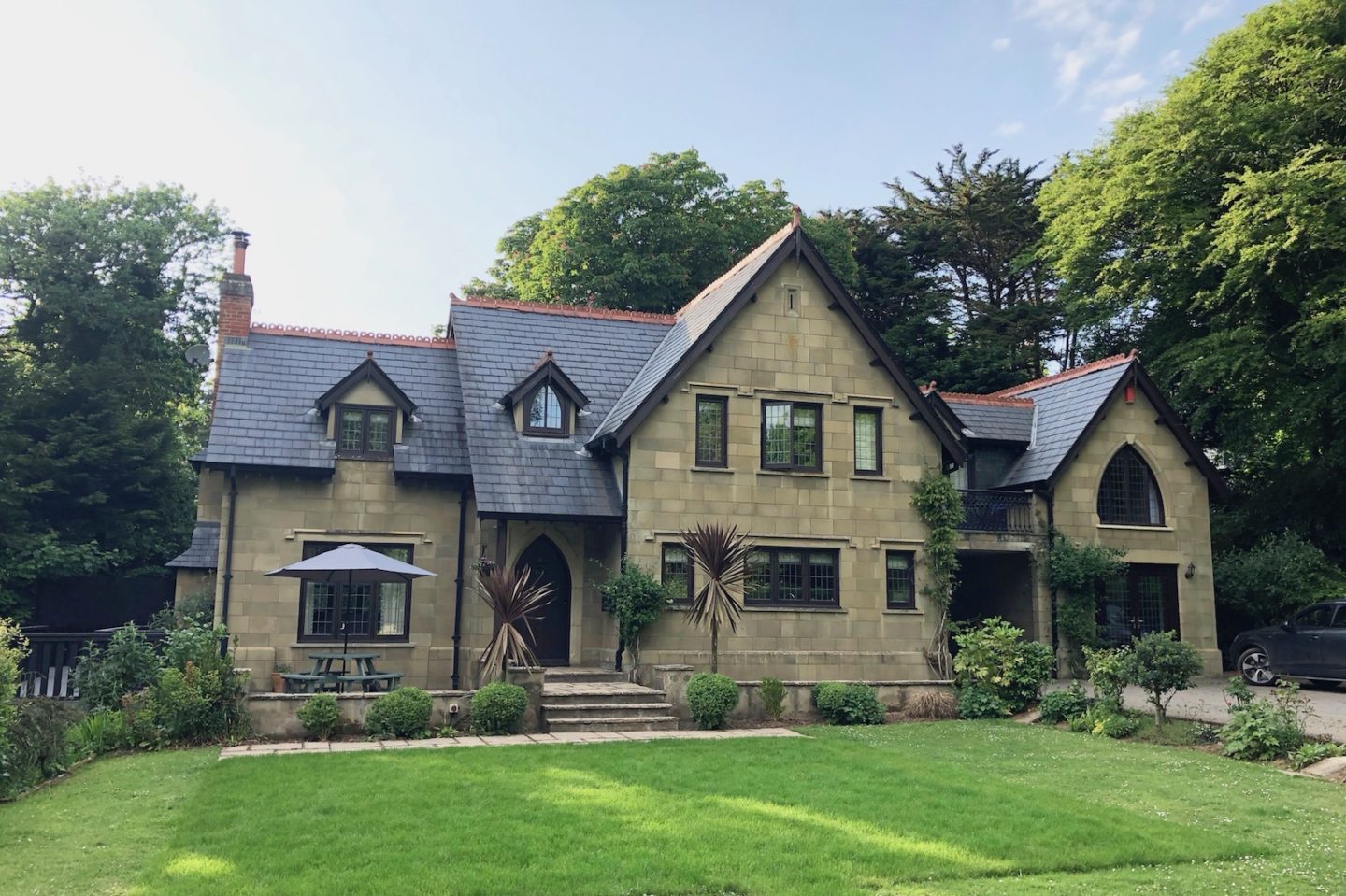 But the standout thing about Wychwood – and this is a massive plus point for me, when I go away – is the feeling of total seclusion. The house is by no means remote – there’s another house to the back of it, though you can barely see it, and a few at the other side of the garden – but you’d be forgiven for thinking you’d been dropped in the middle of nowhere. Surrounded by dense, mature trees, there’s a view of pure greenery from every window and the silence at night is almost total. No traffic noise, no laughing or singing from bars and restaurants (which you’d no doubt get in a house nearer to the sea, in a popular resort), just the wind gently rushing through the leaves and the odd moth flying into the windows. 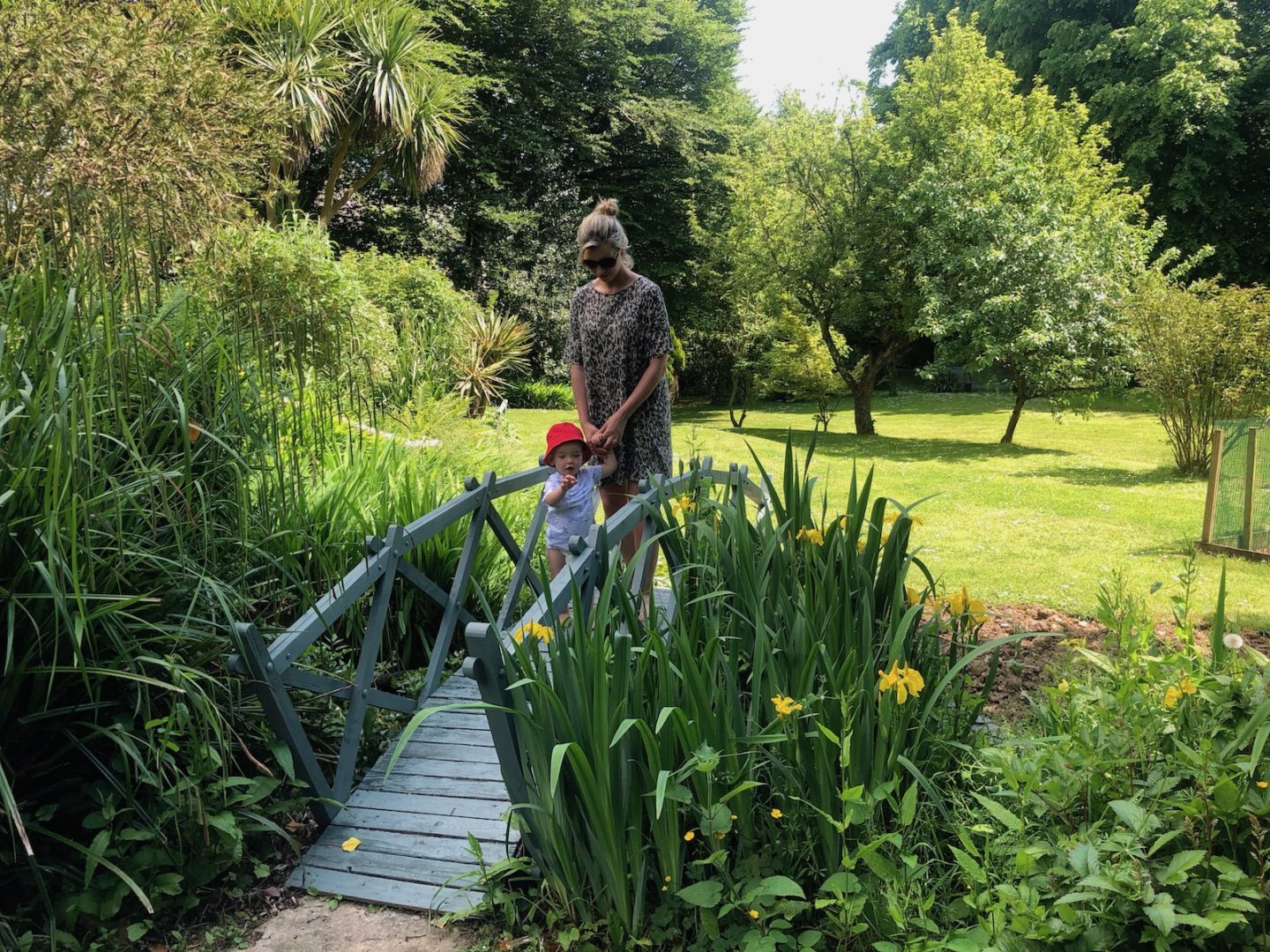 Wychwood Lodge has very obviously just been done up – and to such a perfect standard that I wanted to wrap everything in plastic sheeting before setting foot in each room. I barely wanted to touch anything, it all felt so new – the carpet in the lounge and upstairs was so plush, so untouched, that I followed the kids around on my hands and knees picking off the pieces of lint and bits of dried leaf that they inevitably trailed behind them. I actually hoovered the house before I left. HOOVERED – on holiday! (My Mum says you’re supposed to do that every time, but I thought you only did that if you had left an almighty mess. Which we never seem to do. Thoughts?) 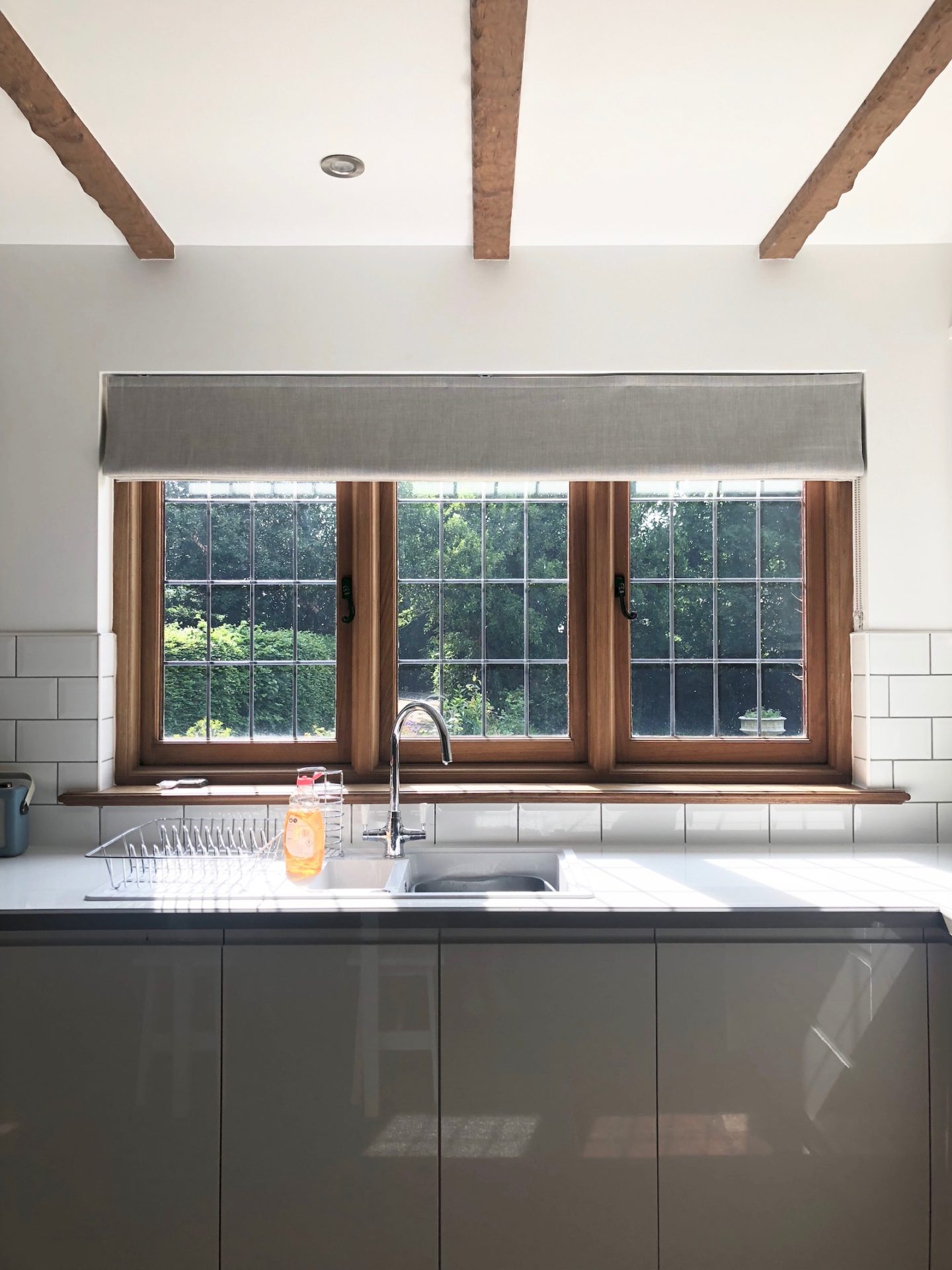 Downstairs at Wychwood there was a kitchen, living room and dining room – we didn’t even make it into the dining room because there was a handy little table with benches in the kitchen. With a wipe-clean, tiled floor beneath them. It seemed the sensible choice. All new appliances – I think I may have been the first to christen the toaster with my oversized crumpet (not a euphemism!) – and the sharpest knives I’ve ever used. Which is possibly the weirdest thing you could say in a holiday home review, but hey – I almost sliced off the ends of my fingernails more than once. Bloody marvellous! Our knives at home are about as effective as plastic swords. You’d have more chance of sawing through a tomato with the edge of a paperback novel. 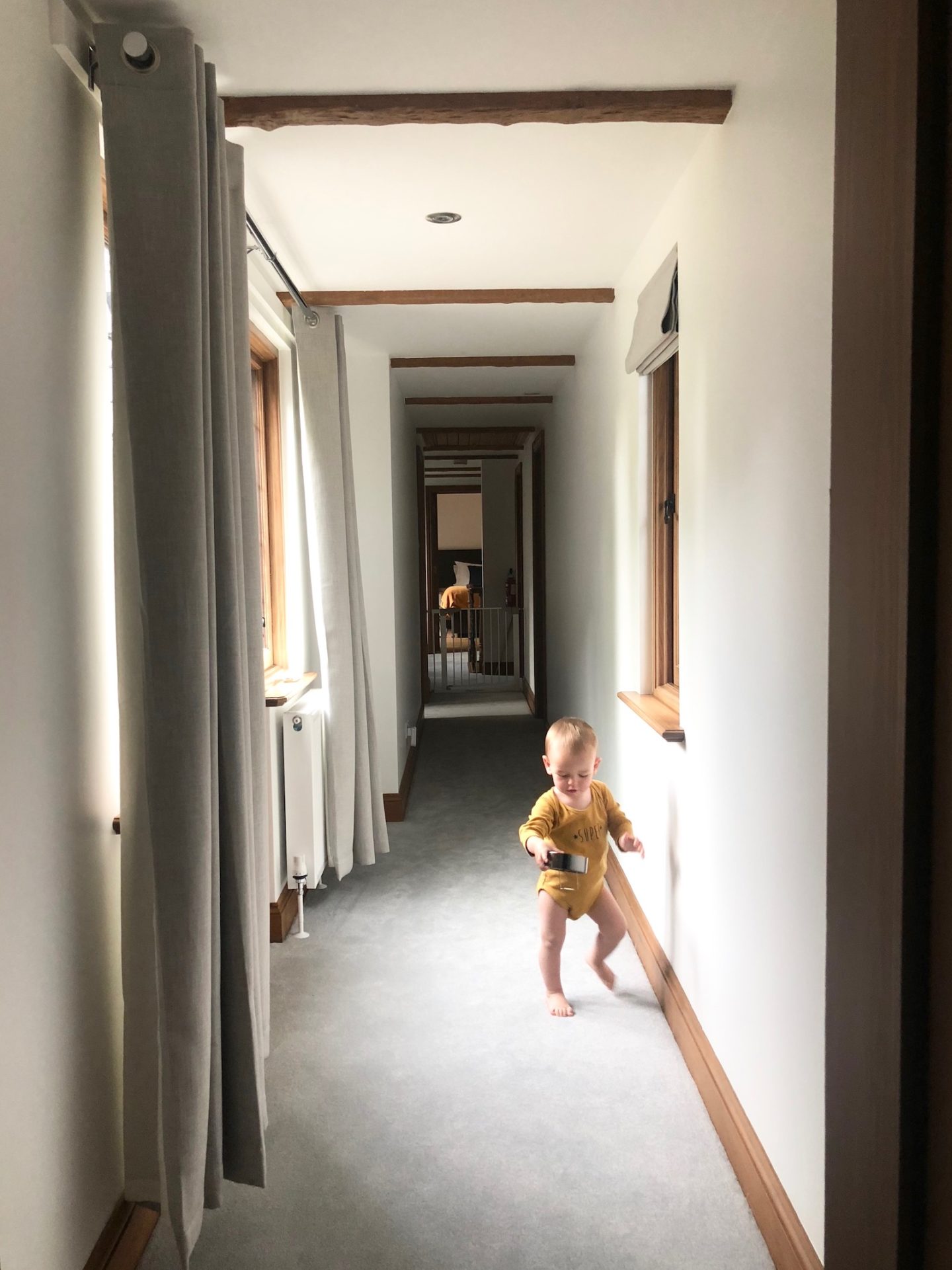 Upstairs, four bedrooms – all of them double or twin, depending on your needs – two of them very spacious and bright and the other two, in the middle, more compact but no less lovely. I locked off the big double at the top of the stairs, put Ted and Angelica in the two middle rooms and then swiftly unpacked my suitcase into the master suite at the end of the bridge. (There was a very long landing, the part of the house that crossed over the car port – Ted and Angelica loved racing up and down it. Perfect toddler fun.) 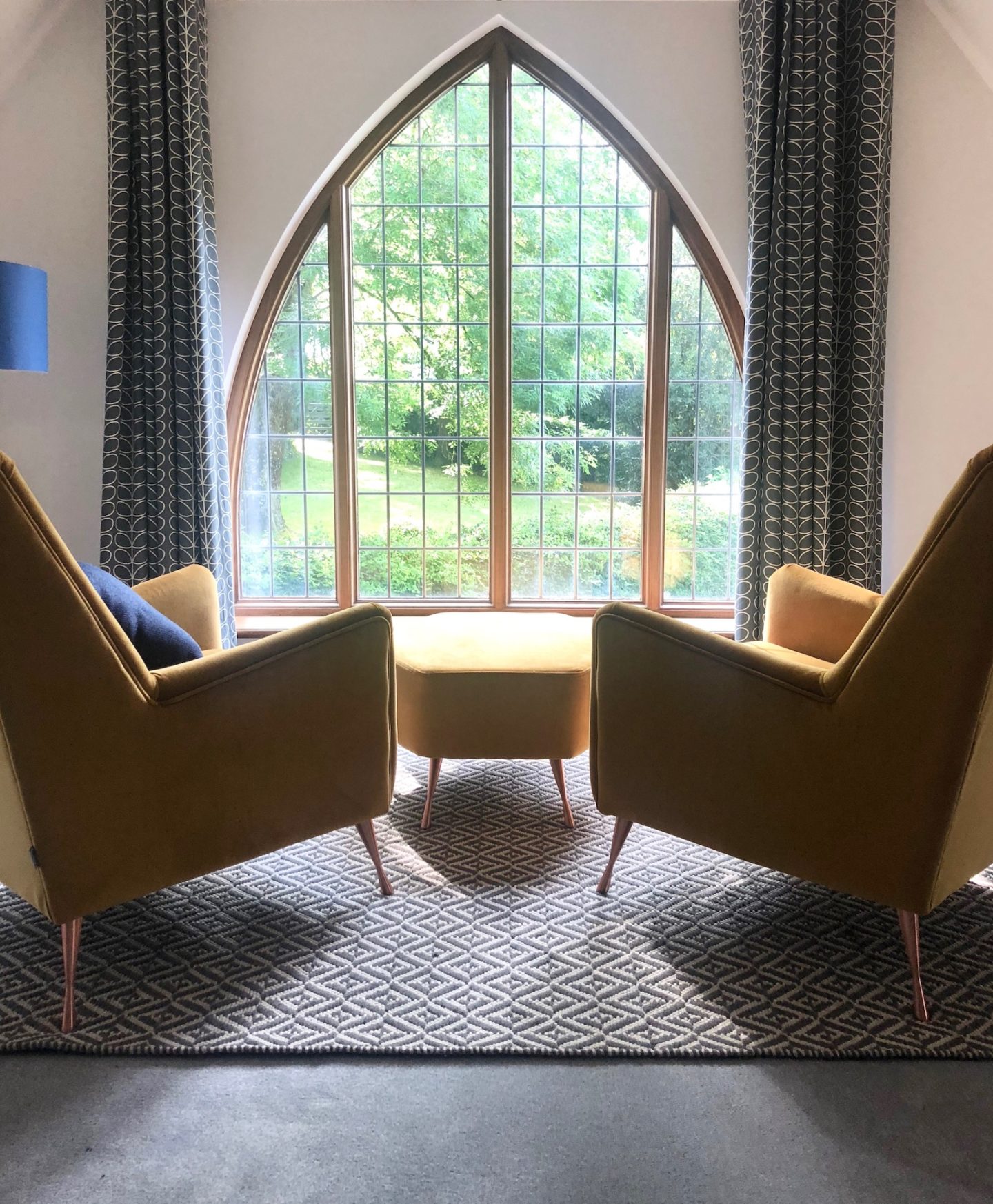 The master bedroom didn’t have an en suite, but what it did have was a huge arched window overlooking the gardens. It was brilliant – had I been allowed a single spare moment to sit in a chair and read a book then I would have done just that. There’s something very special about a house surrounded by greenery – it feels serene, cleansing. At night, I slept more deeply than I think I’ve slept in about five or six years. Not a single noise – not even from the babies, who didn’t stir once. 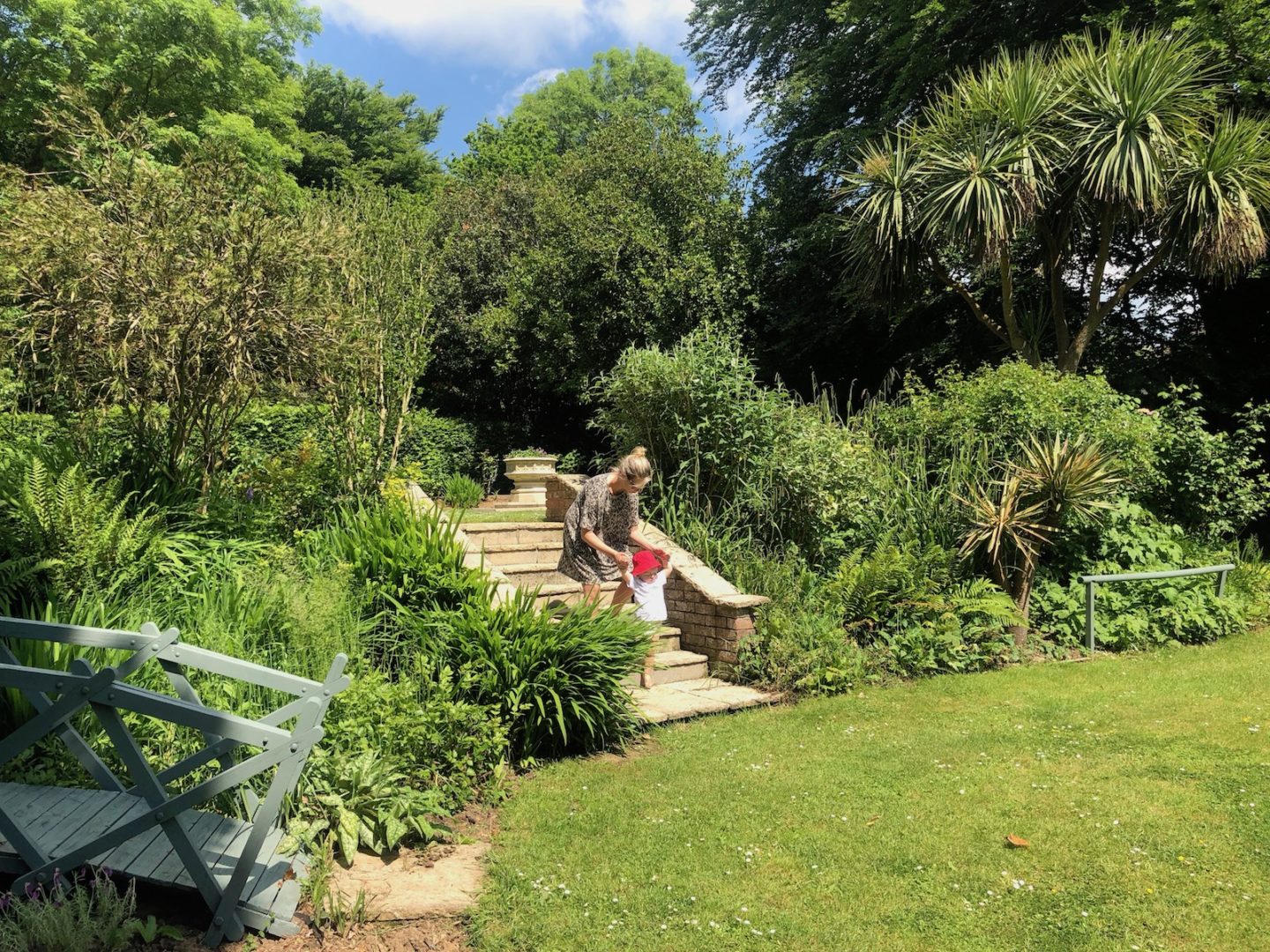 So it’s not on the beach, but it most definitely offers a retreat from the world. You can walk into Poughill village for a pub and emergency groceries – Sainsbury’s and the many bars and restaurants of Bude are 1.4 miles away, so minutes by car and a not-impossible walk if you’re on foot. It turned out to be boiling hot when we went, so we didn’t actually walk all the way into Bude – Ted was angsty in his baby carrier and Angelica insisted on going in the buggy, for the first time in years, and the adult faction (me and Mr AMR) thought we might expire.

It’s worth noting that the beaches in Bude ban dogs, or restrict their access, at least during the summer months. We went to Black Rock beach, which wasn’t too far, but I do wish we’d left Dexter in the shady kitchen for an hour or two and gone to check out Summerleaze and Crooklets. I used to go to Bude as a teen and I remember it fondly – a proper seaside town with the requisite dodgy nightclub, souvenir shops and ice cream stalls. Can’t beat it! Although I have to say, Sandown and Shanklin on the Isle of Wight will always hold a special place in my heart – I went there every childhood summer, I reckon, from around 1984 until 1995-ish. My grandparents lived on the island and that was our summer holiday. I loved it. 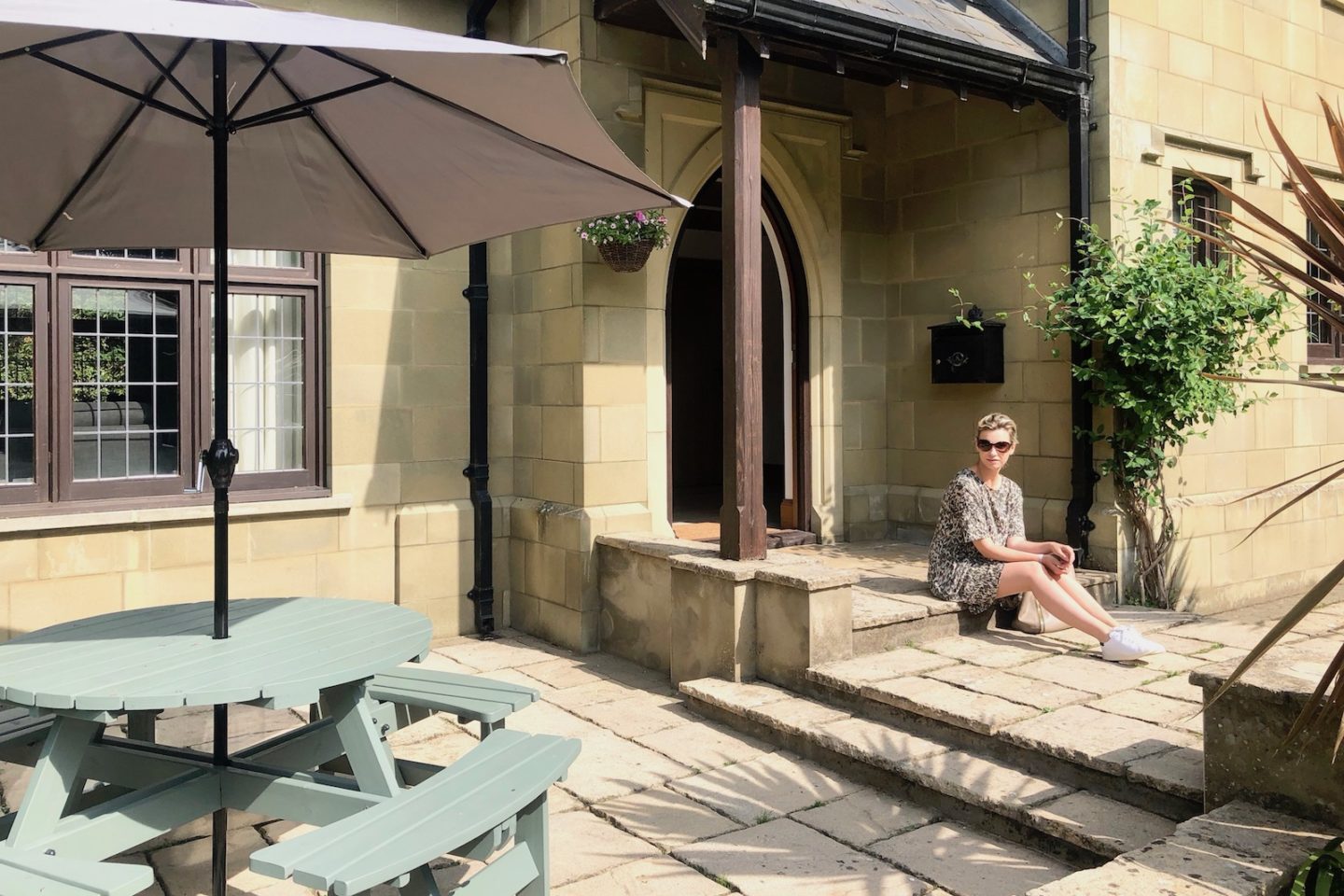 So many thanks, Beach Retreats – Wychwood Lodge kept us more than occupied. The babies particularly liked the surprise wooden pirate ship play area in the summer house – it was like having their own private soft play centre! Although, not soft – but a little climbing wall, ladder, poop deck and slide. Ted was fascinated by the seagull and parrot hanging from the ceiling. It was a lovely touch, the play area – especially being indoors. When you have toddlers and can’t be bothered to pile into the car, it’s great to have an on-site distraction. There was also a games room, separate to the house, with pool table and table football and a games console (God I sound old – X-Box? Playstation? I have no idea!) and if you had older children, I can imagine you could chuck them in there for a good few hours.

You can see more photos of Wychwood Lodge here – weekly rates start from £995 but in off-peak times you can book for 3, 4 or 5 night stays if you don’t need a full week. Take a swimsuit – there’s a hot tub behind the house in the garden – and if you have your dog with you, I’d recommend bringing your dog bed and some large, old towels to pop down on the floor. It almost feels sacrilegious to let a dog step on a carpet that good.

As for the home vs away holiday situation: where do I currently stand? Well, at the moment I’m leaning towards the Seaside Staycation: no airports, no taxi transfers, no worrying about whether or not the bedrooms are too hot. But then there is something to be said for constant fine weather and a proper change of scenery… It’s a stupid weigh-up anyway, really, isn’t it? Because it totally depends on where you go and how you get there. I suppose I’ll just have to test out every combo. Next up: eight weeks in the Maldives via private jet! Haha.