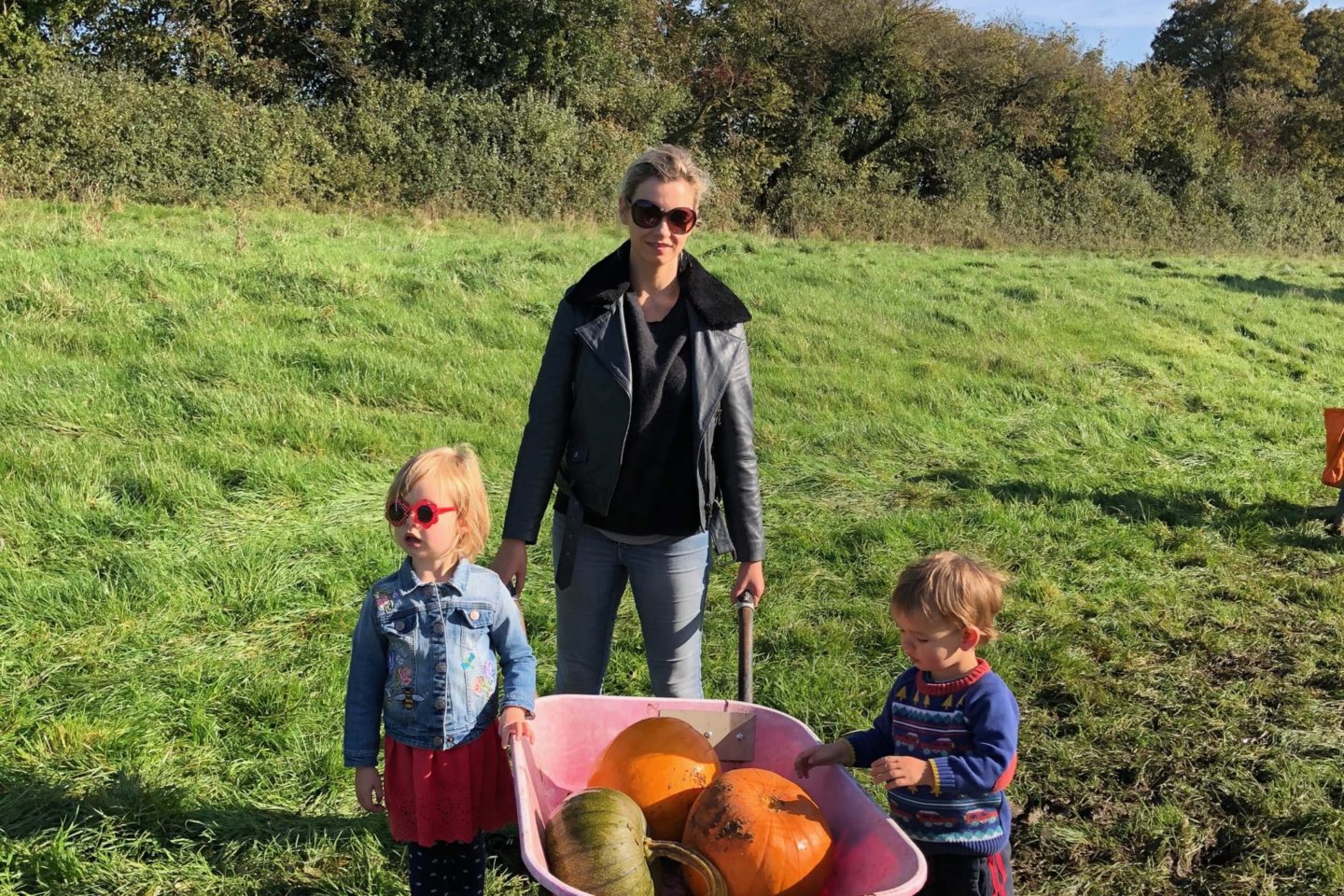 I’ve never been particularly interested in pumpkins or, for that matter, pumpkin carving – incredibly labour intensive, isn’t it? Just to produce something that will hold an Ikea tea light for an evening and then end up rotting next to the bins for a month afterwards. The insides of them make me want to boak, I’m not crazy for the soup you have to make with the flesh (unless it has copious amounts of chilli added to it) and the pie, Pumpkin Pie… I don’t know. Maybe I’ve just never had a good one. 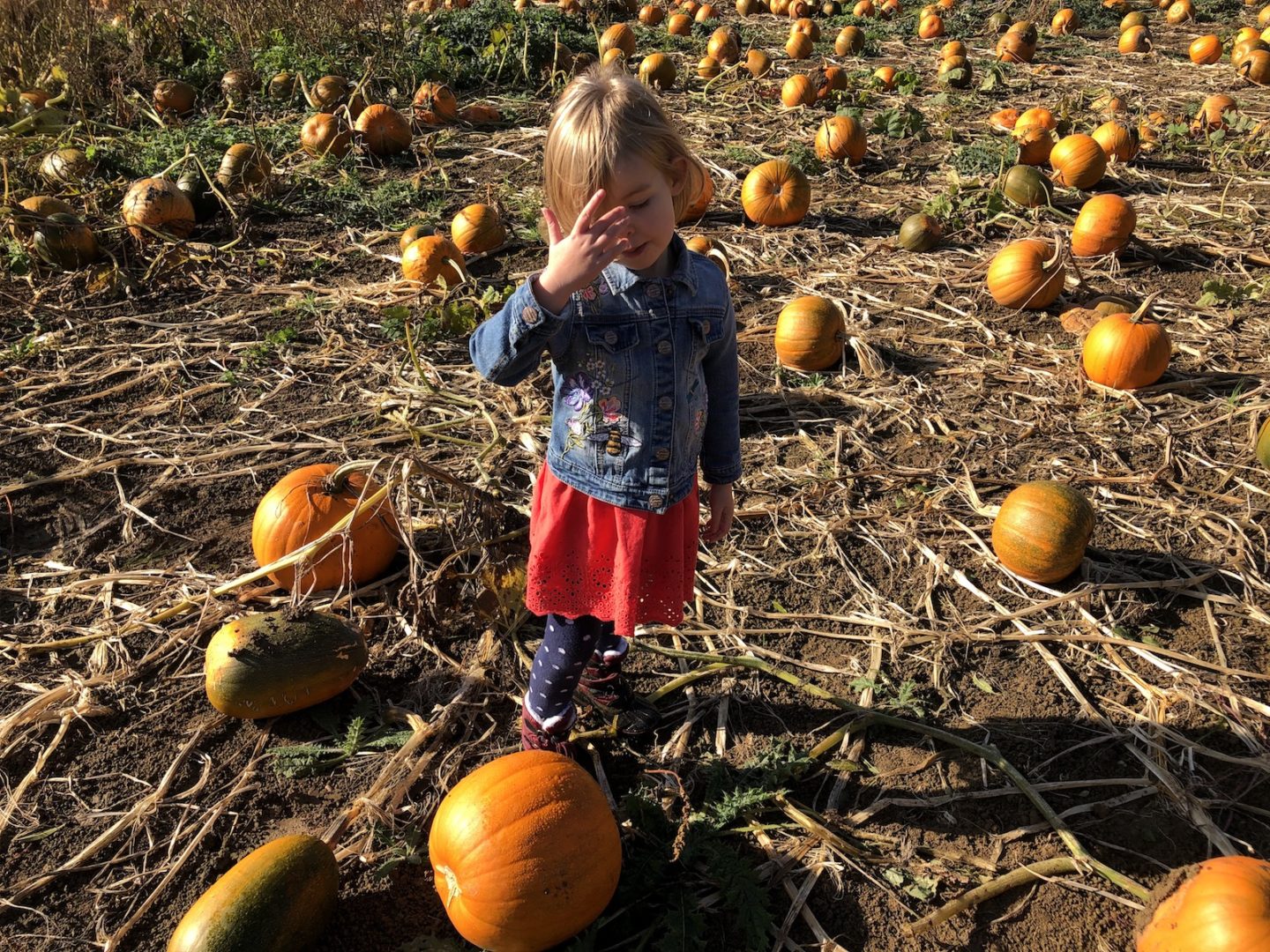 So, this whole craze for the pumpkin-picking thing that you see all over Instagram was never going to be something that floated my boat. Did I want to stand about like a dickhead in a field of engorged gouds, posing with my prize pick and pretending to have a great time? No I did not.

But I went a-picking, my friends, and I did it for my offspring. 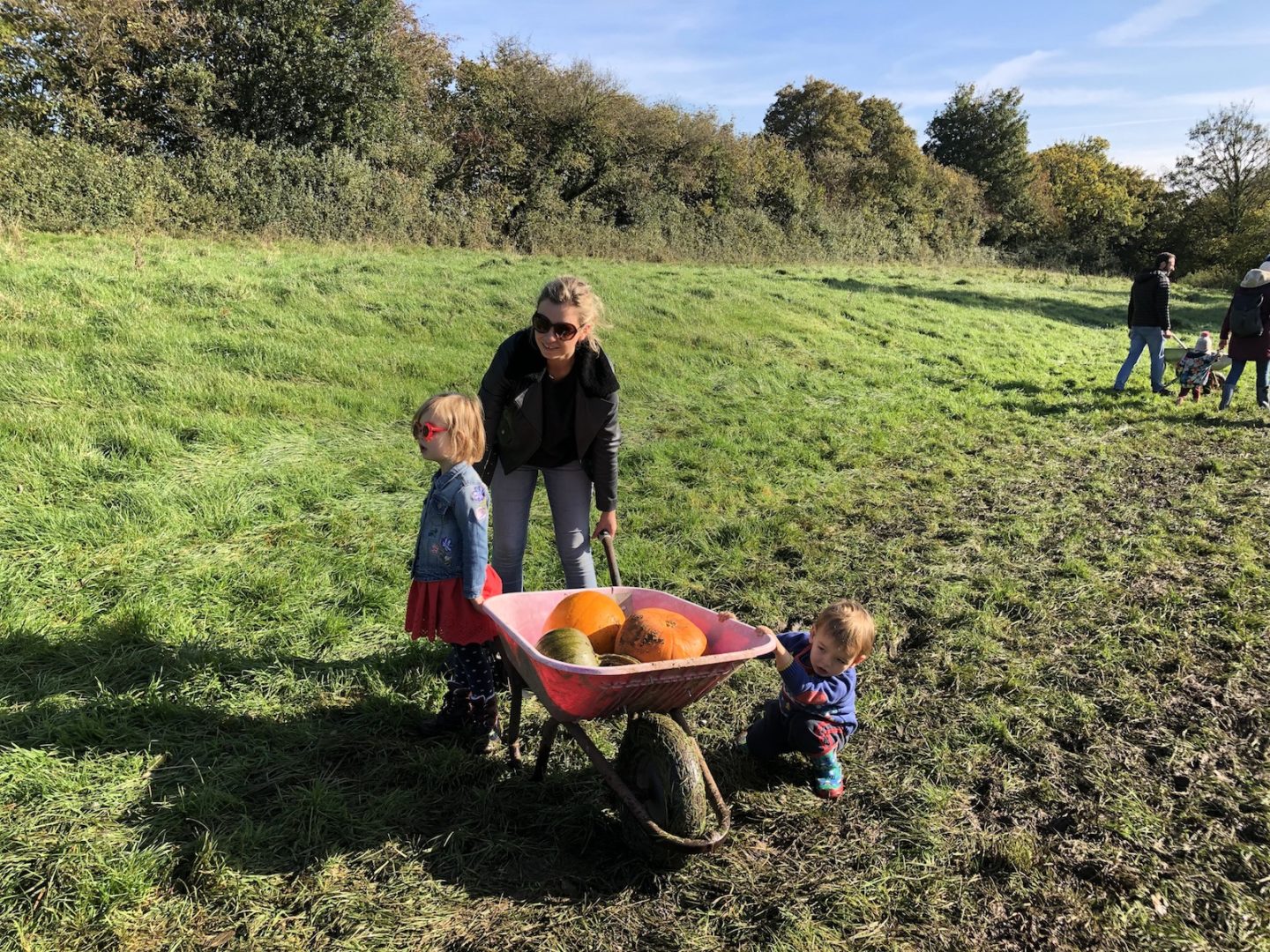 They didn’t give a flying shit about pumpkin picking: halfway to the pumpkin field one of them wanted a wee and the other wanted a snack. Had I not had one of my oldest friends with me, who knows me so well she may as well be my brain, I might have lost the plot. I had inappropriate footwear on (boots that weren’t as waterproof as they should have been), my jeans were too tight in the crotch to be able to fully concentrate on anything but my sense of irritation and I had just negotiated a testing situation with the “wet weather parking” and a gridlock of cars on the narrowest country lane in Somerset. 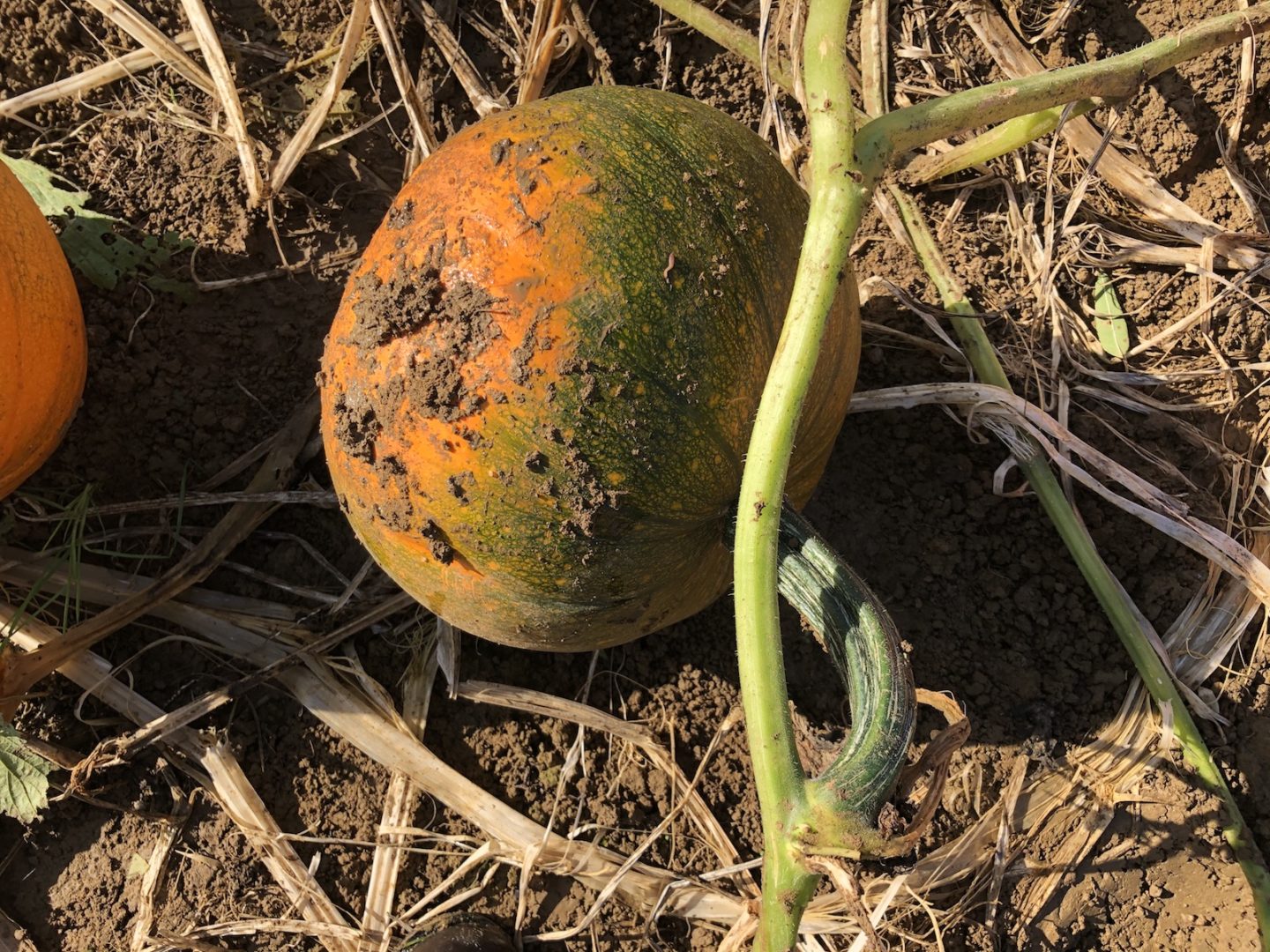 But here’s the thing: pumpkin patches are fascinating! Who knew? I’m so ill-educated about these grotesque, shiny orange balls. I thought that the monstrous pumpkin-y growths would be in the ground, with just their tops sticking out from the soil, so that you’d have to pluck them like carrots. (In truth, I did actually think that they were just massive, grotesquely overgrown sort-of-carrots.) Thank Duckula you don’t have to pluck them, because you’d need a pincer grip the strength of a hippo’s jaw and the bicep power of Hulk Hogan. The things weigh an absolute bleeding tonne! 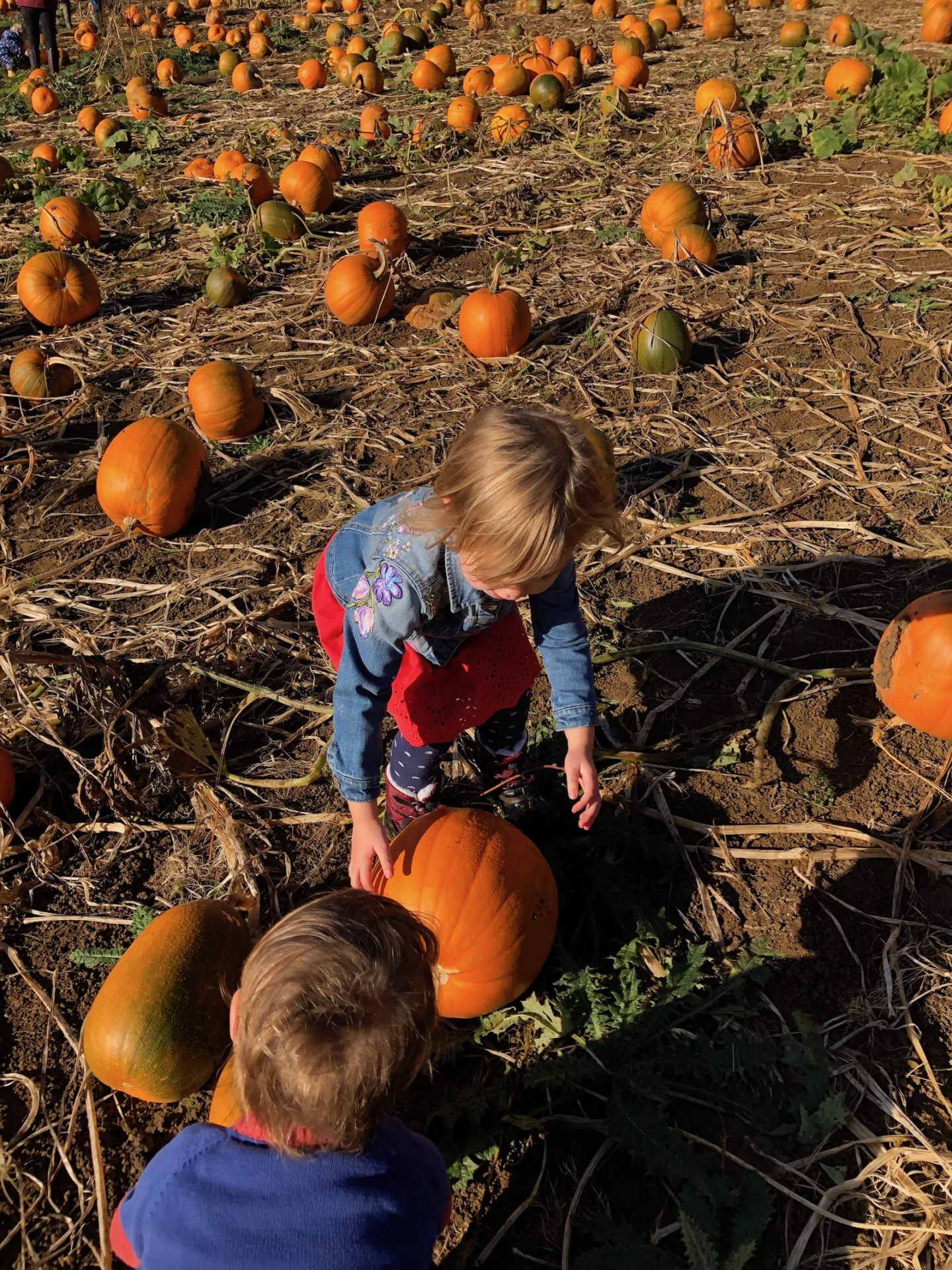 Pumpkins are not buried in the soil, however (sorry if this is like a tedious reception class Harvest Festival lesson, but others may also be ignorant to this); they lie on a horrendous web of spiky alien pumpkin vines, coiling around one another and criss-crossing the earth like thick green veins. Honestly, it was a thrill stepping through them – they were so turgid and plentiful, I could feel the life pumping through them. It was as though they might start to tighten around your boots and slowly but firmly pull you down into the mulch, unseen by others (because they are too busy taking photos for the ‘gram) and only discovered the following year. A skeleton. Death by vine.

I also (sorry to dwell on the negatives, here, we’ll get to the positive, singular) hate decay and mould. I have a real thing about it. If I go into the veg drawer and a chilli has fallen down the side channel of the plastic box and gone furry, I cannot touch it. No way – I have to close my eyes, prong it out with a fork and drop it into a deep container that will put maximum distance between me and said decomposed item, before quickly transporting it to the bonfire I have constructed especially for burning it and all of its relatives.

I am still emotionally scarred from the time that I went strawberry picking and put my hand under the leaves only to find I’d grasped hold of the world’s largest record-breaking strawberry – so decayed it looked like a dead rat. Good God, it gives me shivers even now.

So imagine what an exploded, mouldy pumpkin looks like to me! The blasted open contents of an egg pod from another planet. Hell on earth. I rolled one pumpkin over with my boot to find the whole underneath of it fallen away and pulpy – the boots are now on the bonfire with the mouldy chilli pepper. 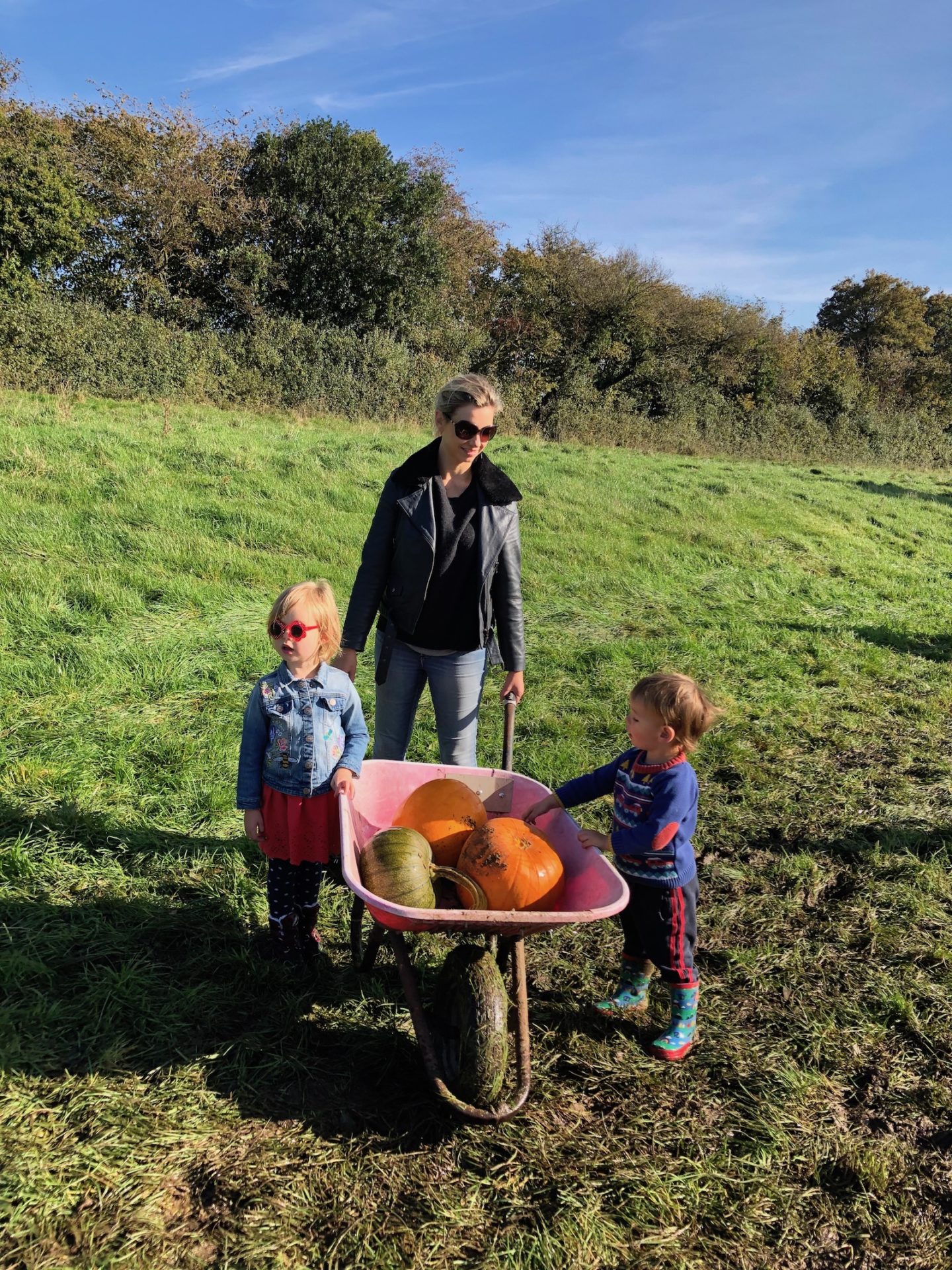 Anyway, we managed to pick three pumpkins – FYI, don’t ever grasp the stem because it has been embedded with a thousand tiny spikes, like a cactus! – and we hefted them into the wheelbarrow. I had laughed off the organiser’s offer of a wheelbarrow, at first – “it’ll only slow us down!” I shouted, jovially,  as we strode away up the path, “it’ll be quicker just to pick them and carry them like footballs!”

But we quickly went back for the wheelbarrow after I saw a large man, who could feasibly have been an Iron Man contender, struggling along in the mud with an orange pumpkin under each arm, the veins on his forehead throbbing with effort, sweat dripping from the end of his nose.

Thank God for the wheelbarrow – we could hardly make our way even with it! Ted lost a welly in the plashy fen, Angelica rubbed the scab from her ankle in her new boots, I almost went arse over tit when I decided to barrow my way through the deepest part of the mud bath.

Thank God for the wheelbarrow….that was taken from us after we’d paid for the pumpkins. What a trick! We handed over the money and, as the pumpkins were laying on the ground next to the sizing board, someone whisked the barrow away! No wheelbarrows up to the car park, which was approximately eleven times further away than the pumpkin patch. I won’t go into detail for the return journey, but it was emotional. My leather jacket will never recover. 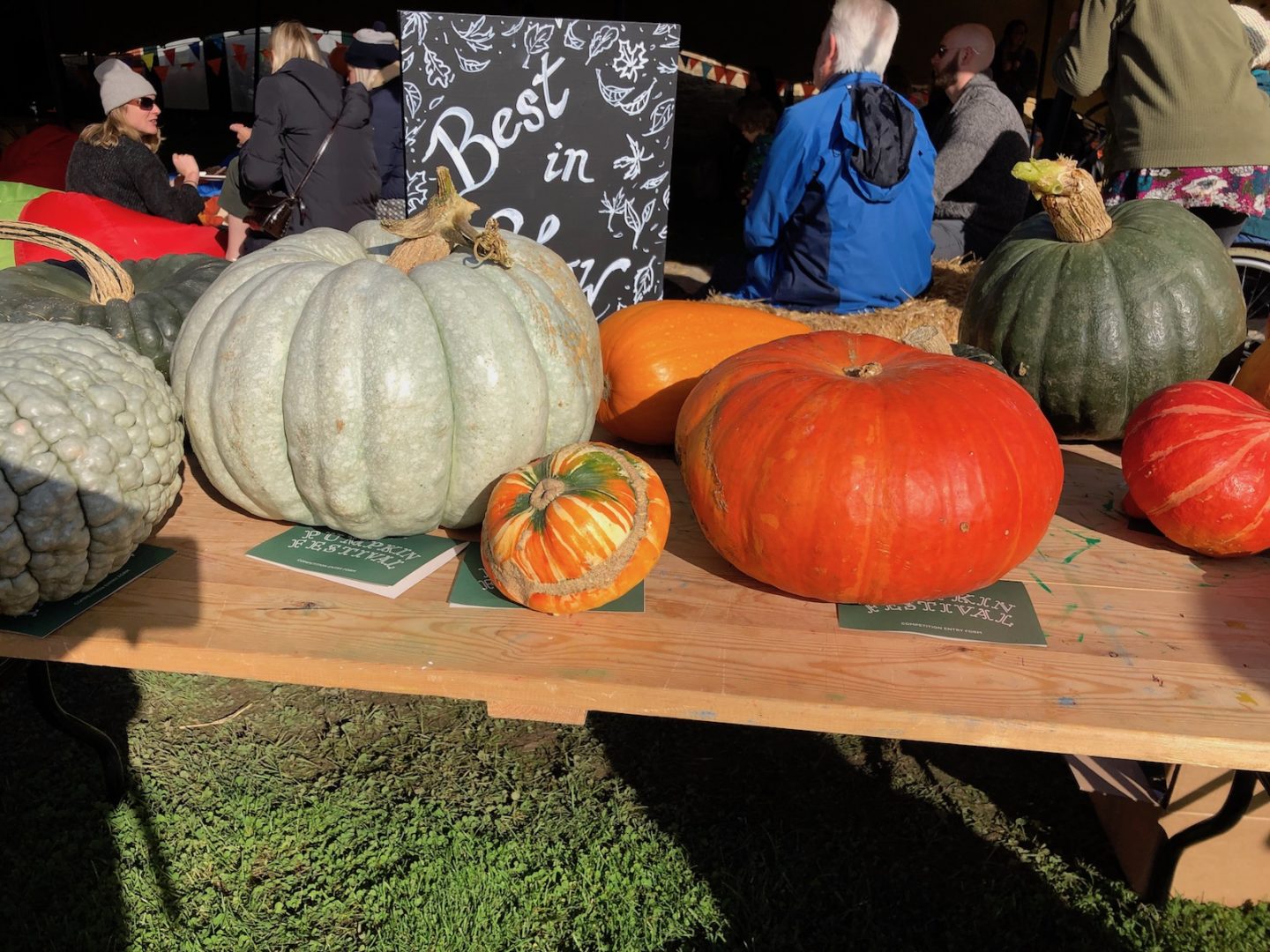 After picking our pumpkins, we popped to the delightful Pumpkin Festival at Hauser & Wirth in Bruton to look at some more. 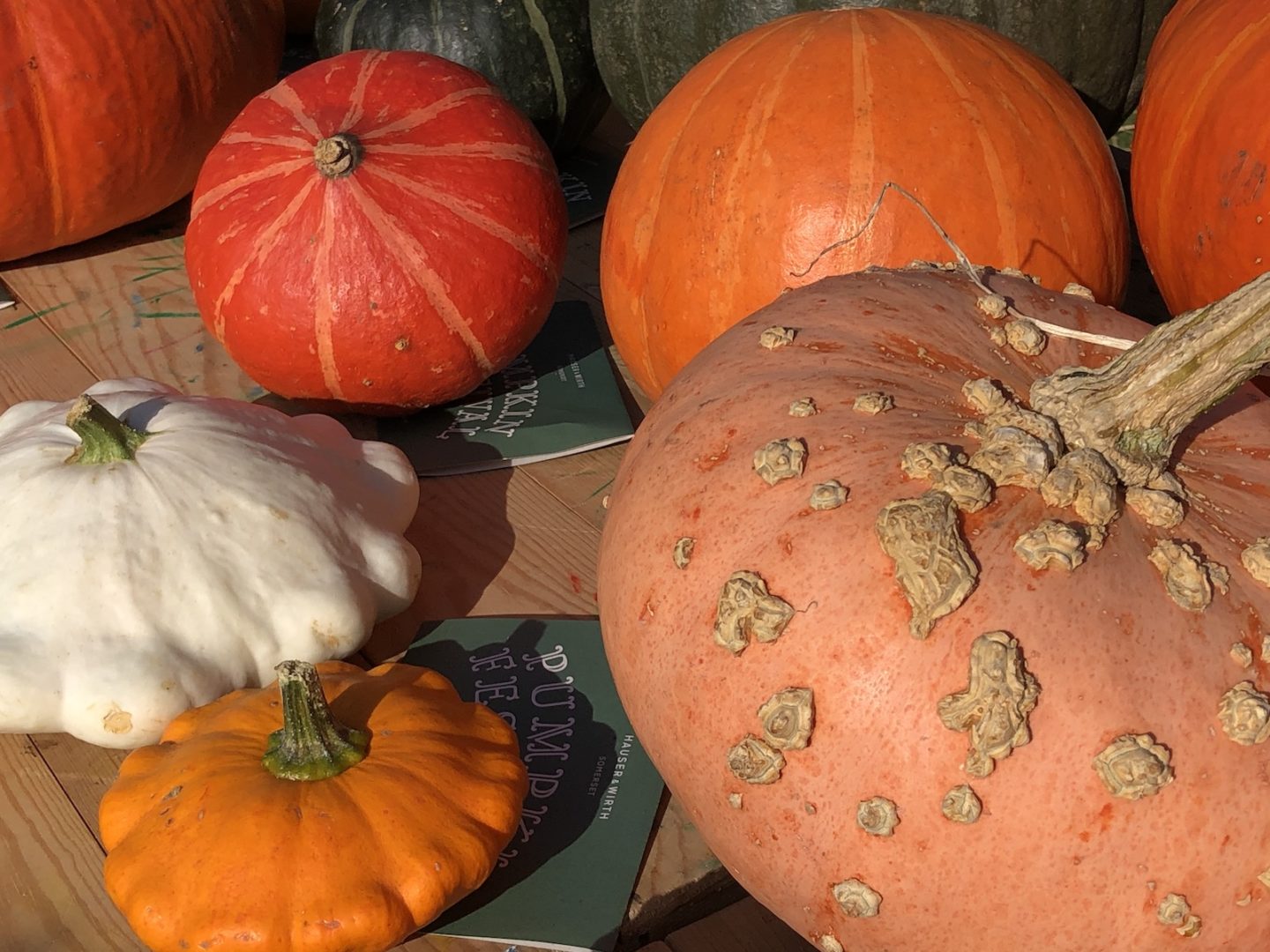 There were giant ones so large they filled the back of flat-bed trucks, there were pumpkins so bumpy they looked diseased and weird, nobbly-shaped ones that were comical in their ugliness. Great fun. 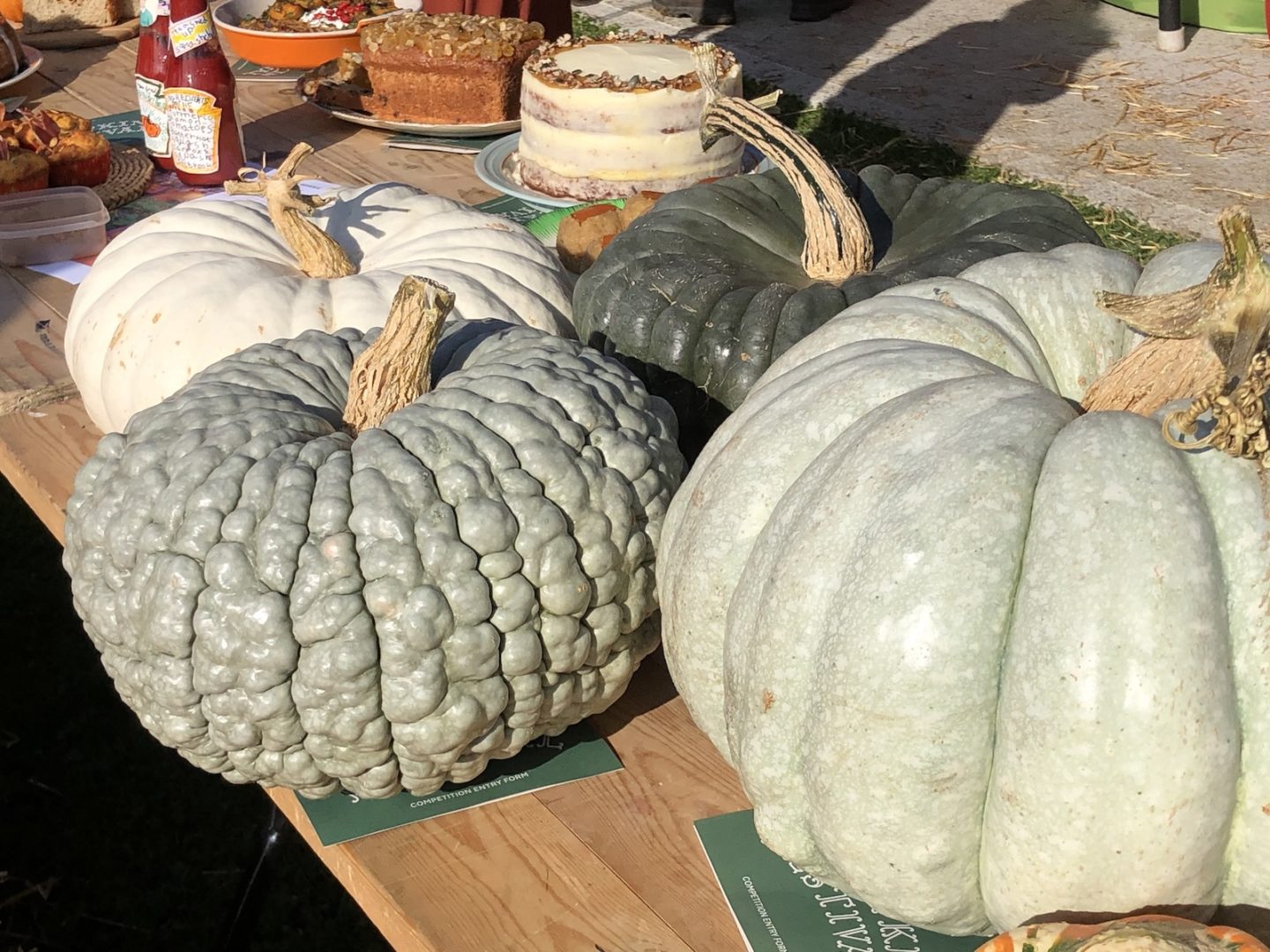 We would have stayed for food but the queue for the (excellent) pumpkin-themed fayre stretched all the way back to London and so we went home for lunch, carefully transporting a box filled with cakes from the Bakemonger. They looked too autumnal and gorgeous to resist – have you ever seen an autumnal cake? I hadn’t until then, but they were all heavily adorned with dried fruits in weird colours and grainy, brownish bits and pieces. Spectacular. If you love cake then you’ll like their Instagram page too – it’s @the_bakemonger. 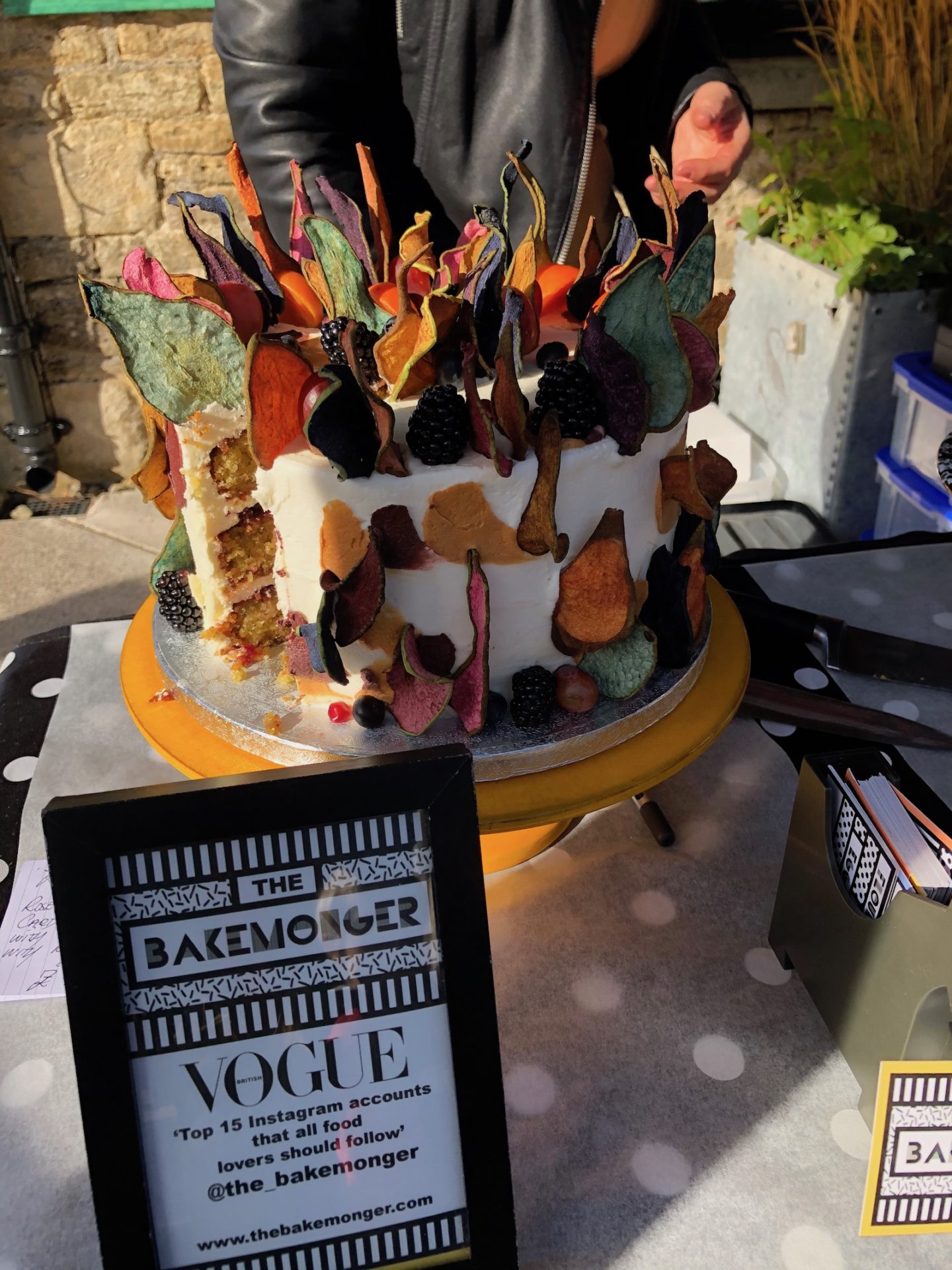 Needless to say, our three gigantic pumpkins lie uncarved, taking up half of the kitchen and still covered in mud. I’m loathe to wash them in case I slip and drop one and it smashes the sink in half and/or creates a sinkhole that we all subsequently disappear into. Bloody pumpkins!

But here’s a little mood board of the things I thought I’d do with my pumpkin – photos courtesy of onekinddesign.com: 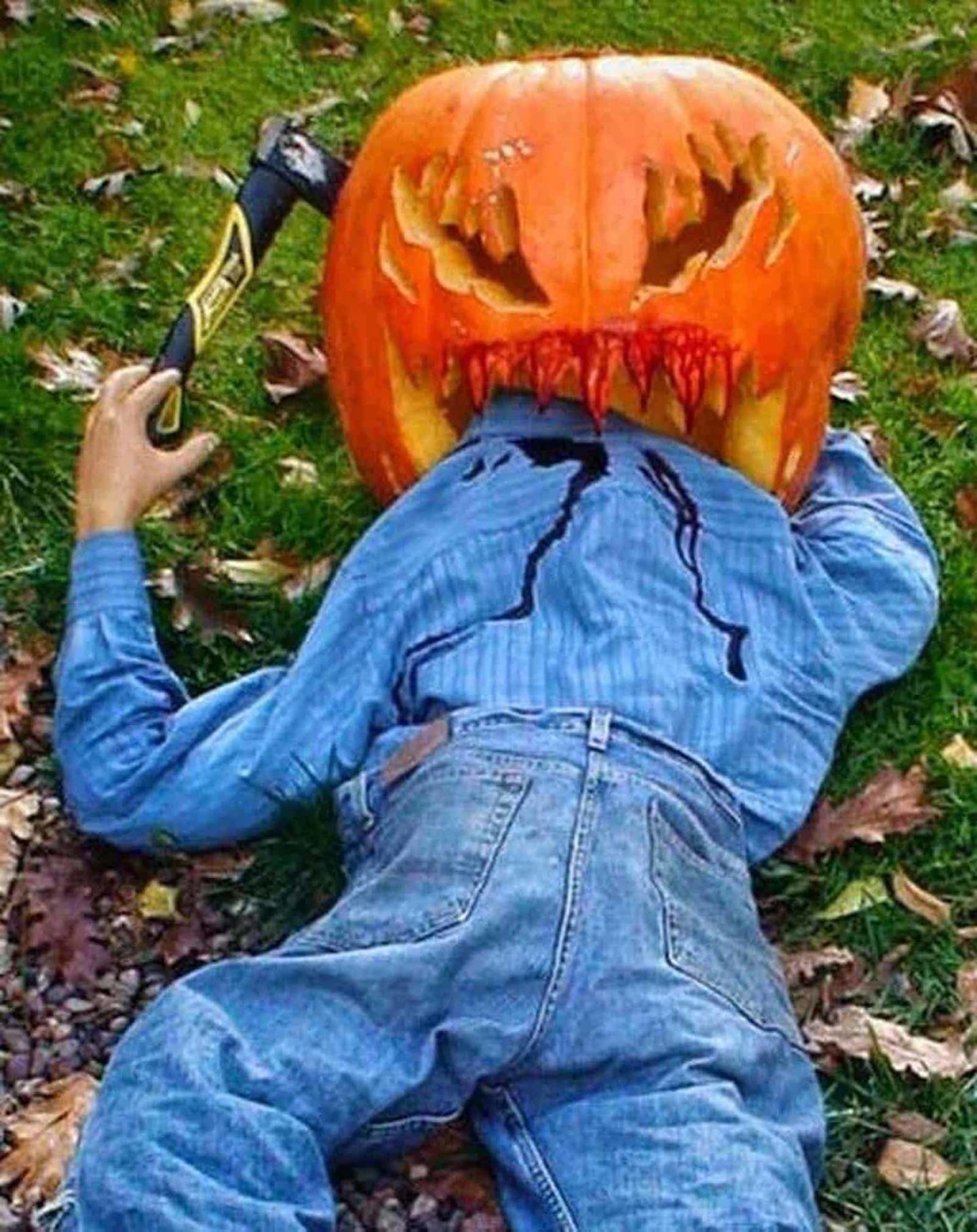 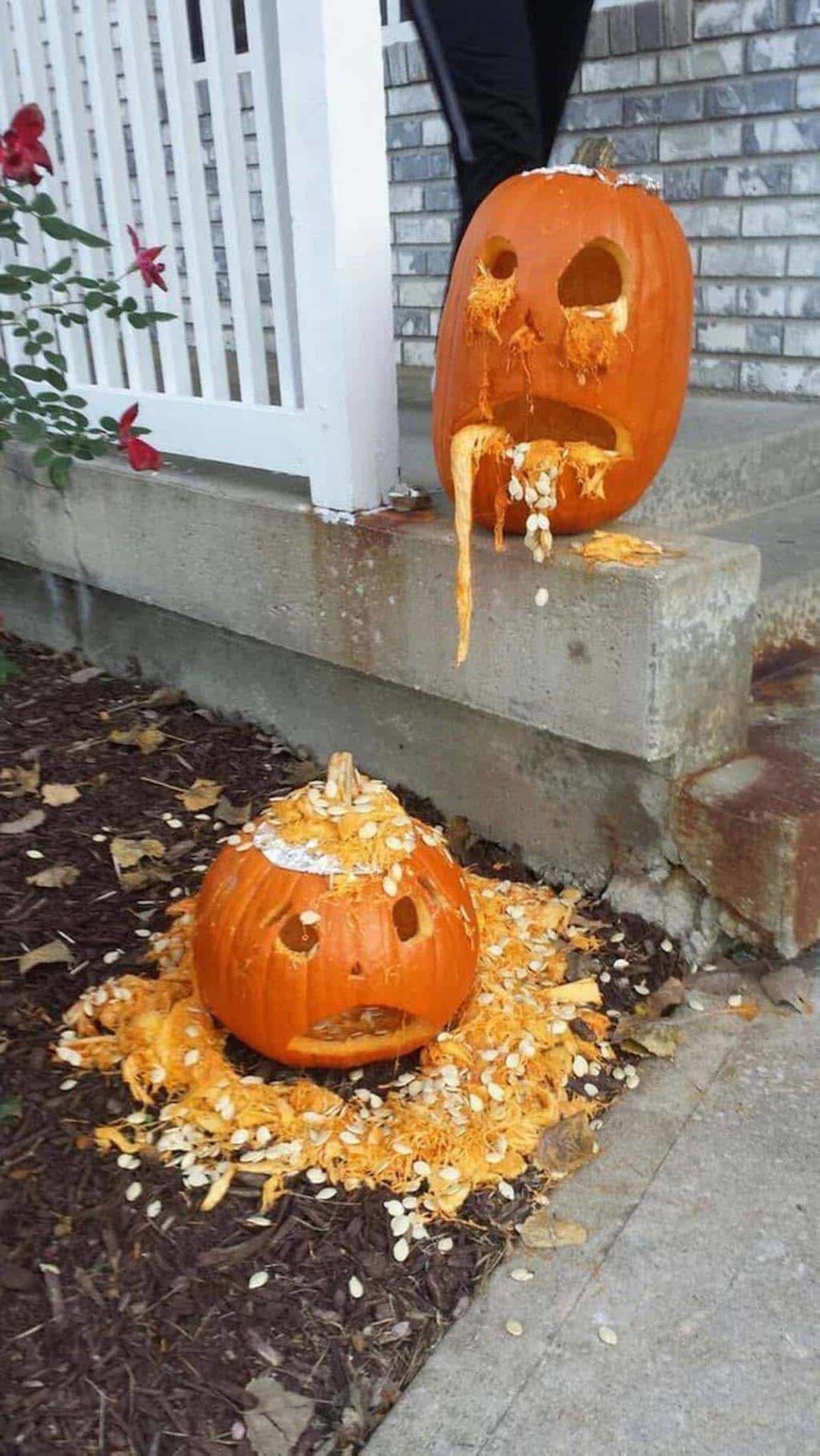 Do you take part in the pumpkin festivities? Picking and carving and cooking and eating? Any good recipes for using up approx. 75 kilos of pumpkin flesh?