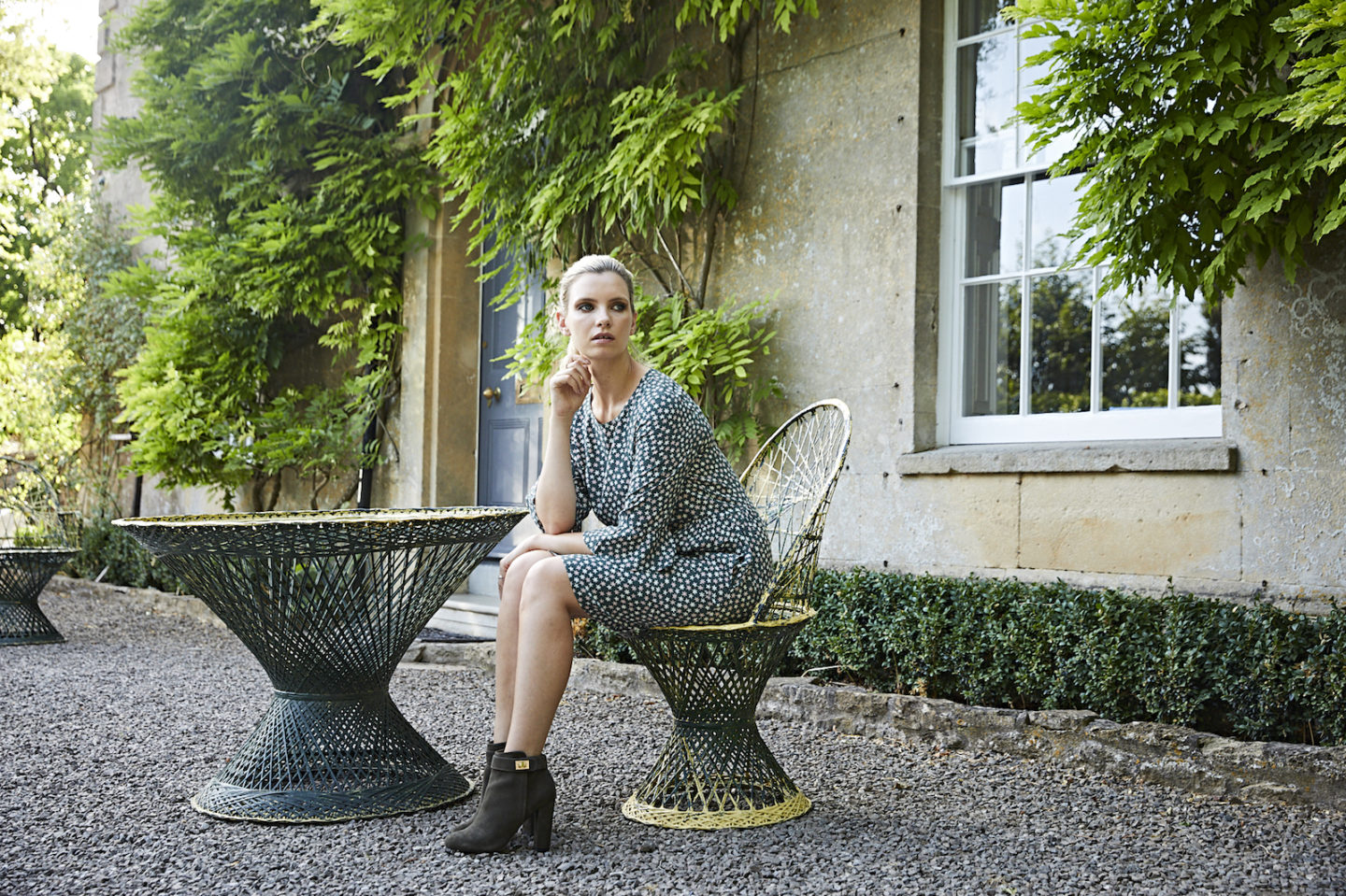 After a glorious, long spell of hot weather, temperatures have dramatically dipped in the UK, seemingly leaving half the population wondering what an earth to wear. It’s as though we’ve completely forgotten what normal dressing is. What type of footwear goes with trousers? What even are trousers?

I saw a man yesterday walking into Bath Spa station wearing chino shorts with polished black dress shoes, his briefcase bouncing off his hairy legs as he strode along. One lady was clutching both a battery-operated mini-fan and a coat in her right hand, an umbrella looped over her left, covering as many meteorological scenarios as possible. I saw someone wearing a tie with a polo shirt, another wearing a pinstriped suit with rubber flip flops.

I’ve fallen into the (not altogether displeasing) routine of wearing flimsyish summer dresses with huge, warm, fluffy cardigans over the top. It means that I can continue wearing the exact same wardrobe as during the heatwave (mostly my Whistles dresses) but keep off any brief chilly moments with a mountain of cardigan fuzz. This approach to dressing does have its disadvantages, mainly that there’s no middle ground – only lightweight dress or centrally-heated fur-suit (it’s like being a cat) but it’s convenient (what’s easier than slipping on a cardy?) and it means that I don’t have to delve into the jeans drawer. 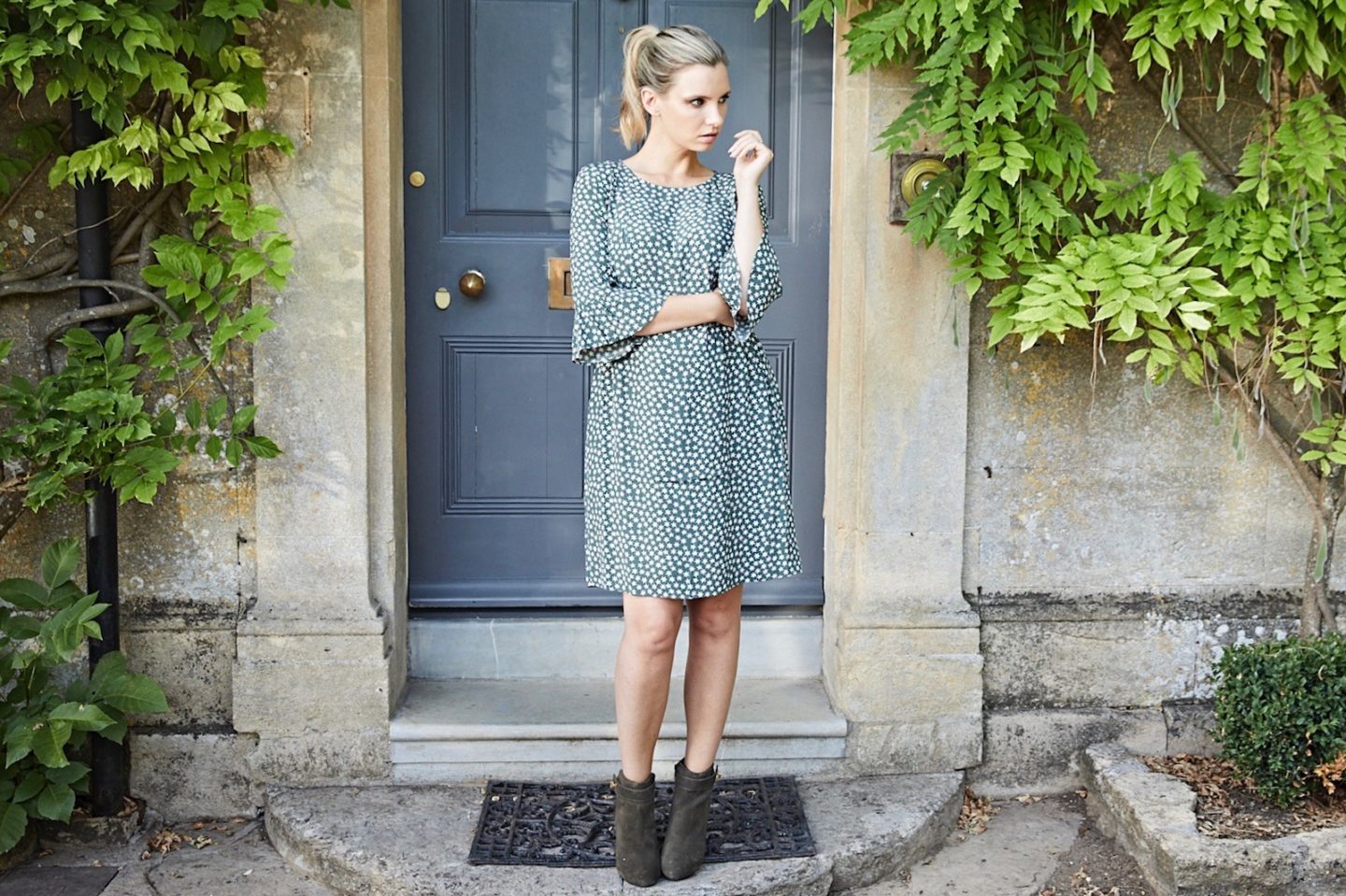 I have no idea where this post is going, other than to tell you about a new dress I bought a couple of weeks ago – the Hyacincth from Boden*. I thought that the print was a bit rock ‘n’ roll – tiny stars on a green background – but on closer inspection they’re actually flowers. Still, even with the fluttery sleeves and wispy fabric, it doesn’t feel overly pretty – it lends itself very well to being toughened up with a leather jacket and some buckled boots. I couldn’t find mine (and it was still twenty four degrees outside) so I dug out some old Topshop boots. 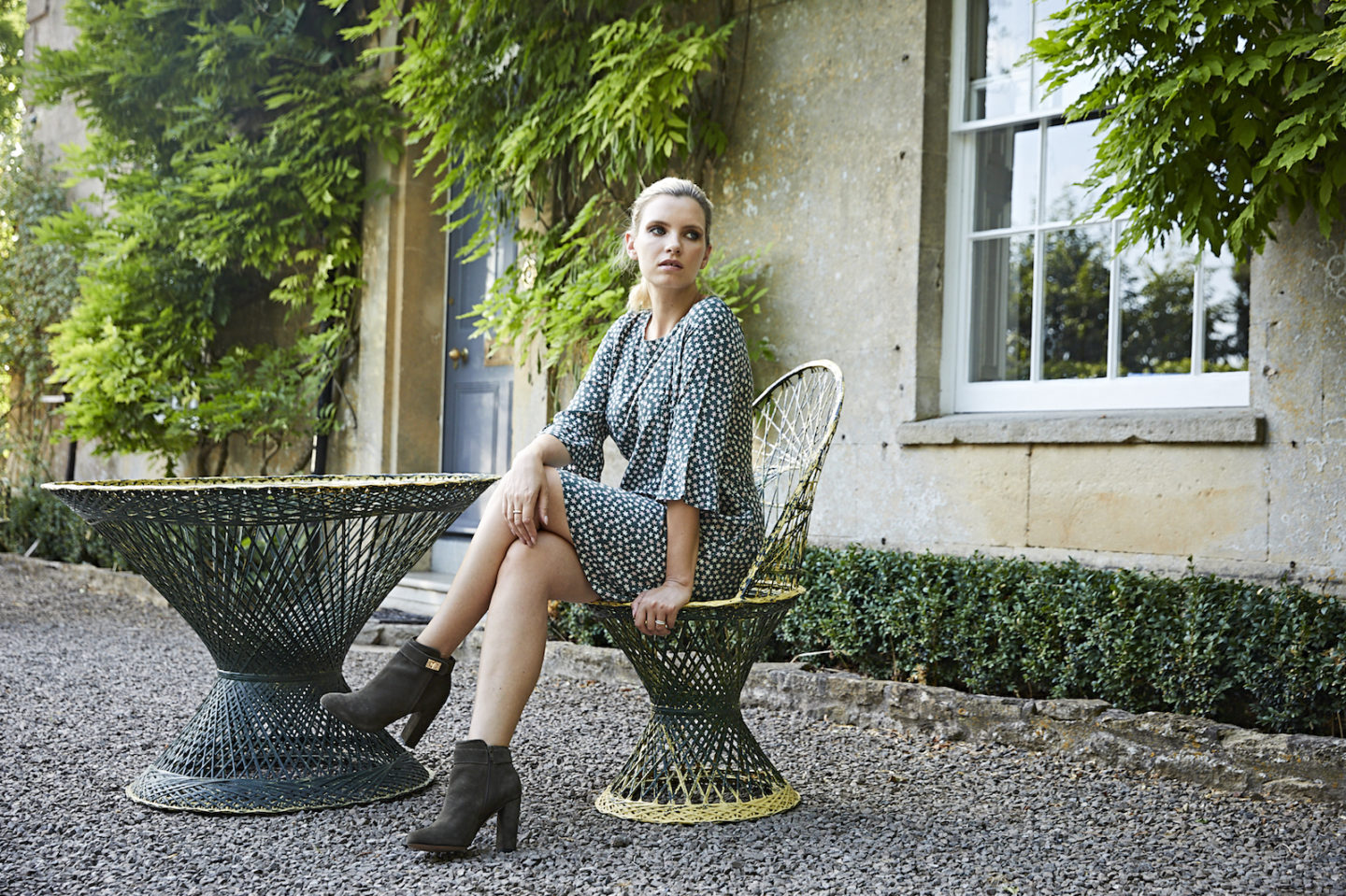 I say old, but I don’t think I’ve worn these green suede beauties even once! Do you remember when I featured them, way back in 2015? I called them the “perfect autumn boots” (post here). But despite their “high end feel” and “gorgeous sexy shape” they didn’t make it out of the cupboard. Big mistake – huge! The heel is just lovely, the colour looks very expensive and the buckle is a brilliant designer detail. If Topshop ever make these again (they were called Honey) then snap them up. They’re not hugely comfy, but neither are they torturous. Selling them there, aren’t I? 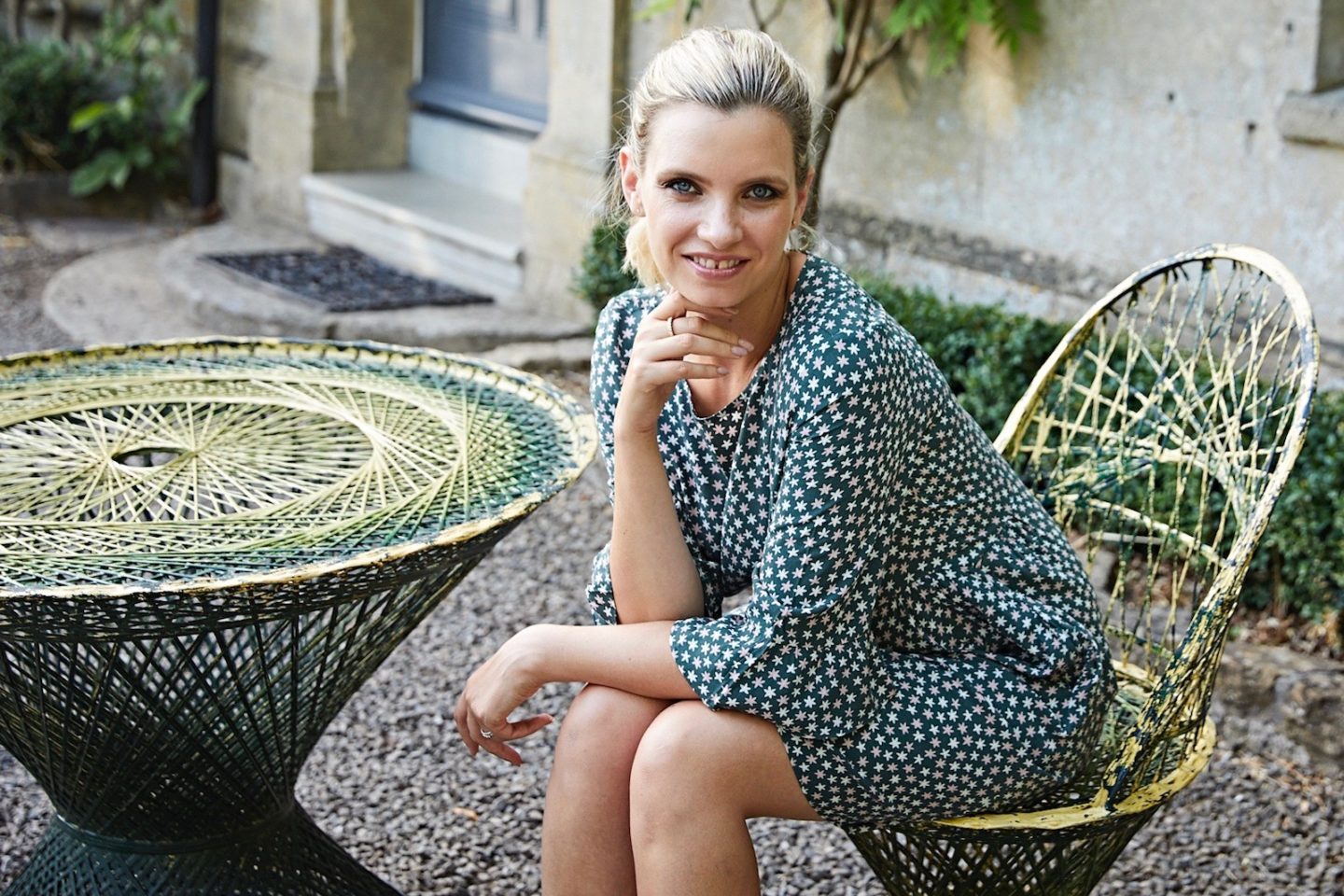 Back to the Hyacinth dress and its flippy, lightweight fabric – this is the sort of dress you can wear immediately and layer up as the weather gets cooler. Sandals and no cardigan in August, white trainers and chunky knitwear in September, wool coat and a cashmere hat in November. You’ll have to ad lib for October, it’s always a weird month, and by December you should really have worked out how to layer stuff. It’s really as simple as just adding more clothes. 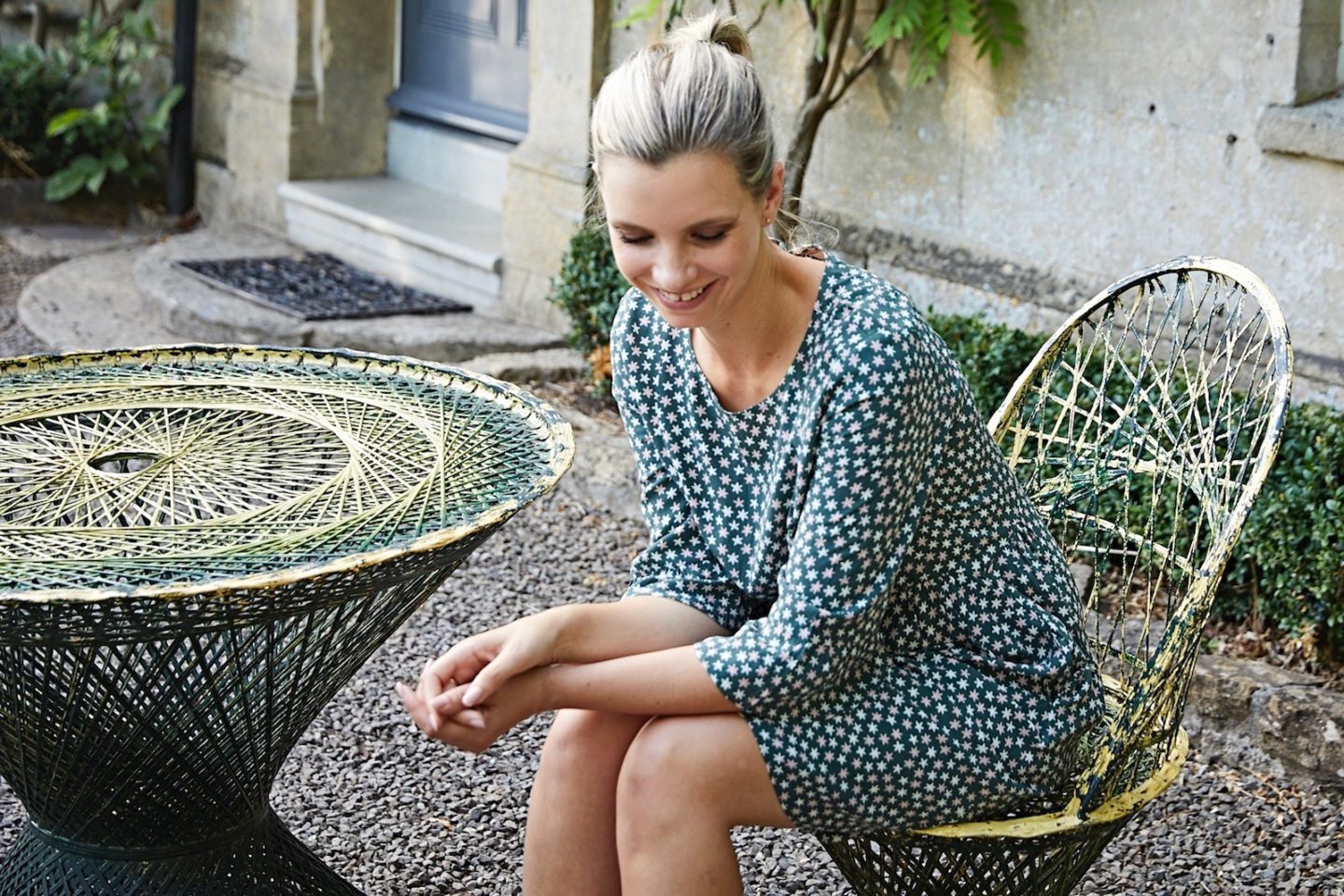 You can find the Hyacinth at Boden online here* – it’s £60 but I had a voucher code on the back of a flyer and got 10% off. I have the size 10, regular, and it’s satisfyingly roomy. I’m usually a large UK10/small 12, so I’d say that this dress comes up slightly large. It has quite a relaxed fit anyway – it would look very wrong if it was tight – but if you’re on the fence between two sizes I’d probably plump for the smaller one. Actually, I just order two sizes when I’m buying online and then send the wrong one back – nearly everyone has a free returns service these days…