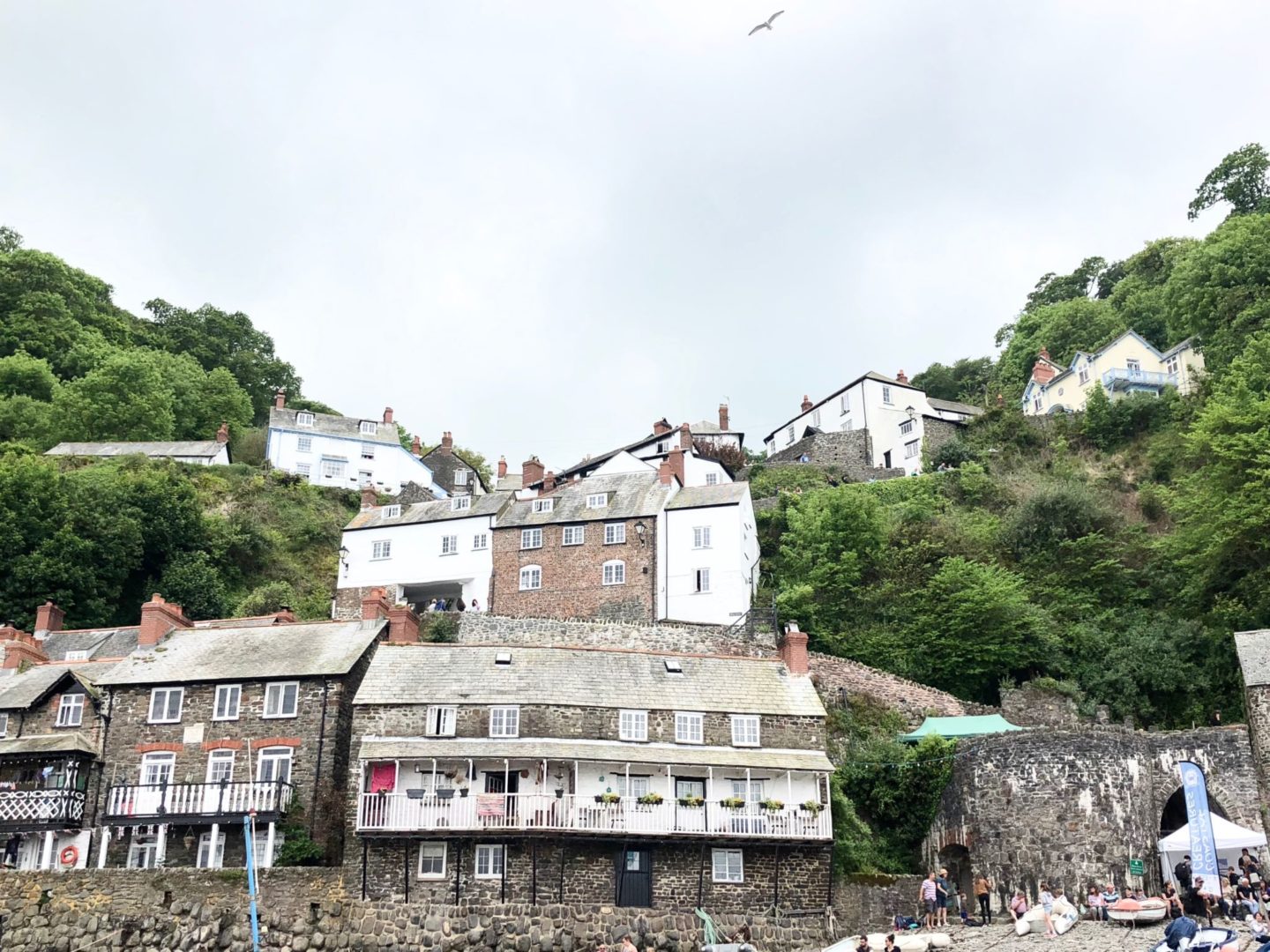 Something happened on our family trip to Cornwall, back in May: I almost died. Now some people will say I’m being melodramatic about things and that I wasn’t anywhere close to death and that also I shouldn’t make light of death, or near-death, and to those people I say this: try climbing up the world’s steepest hill with over thirty pounds of wriggling child hanging around your neck whilst your inadequate walking trousers (old Abercrombie and Fitch jeggings) repeatedly fall down. And then tell me it’s not a near death experience. 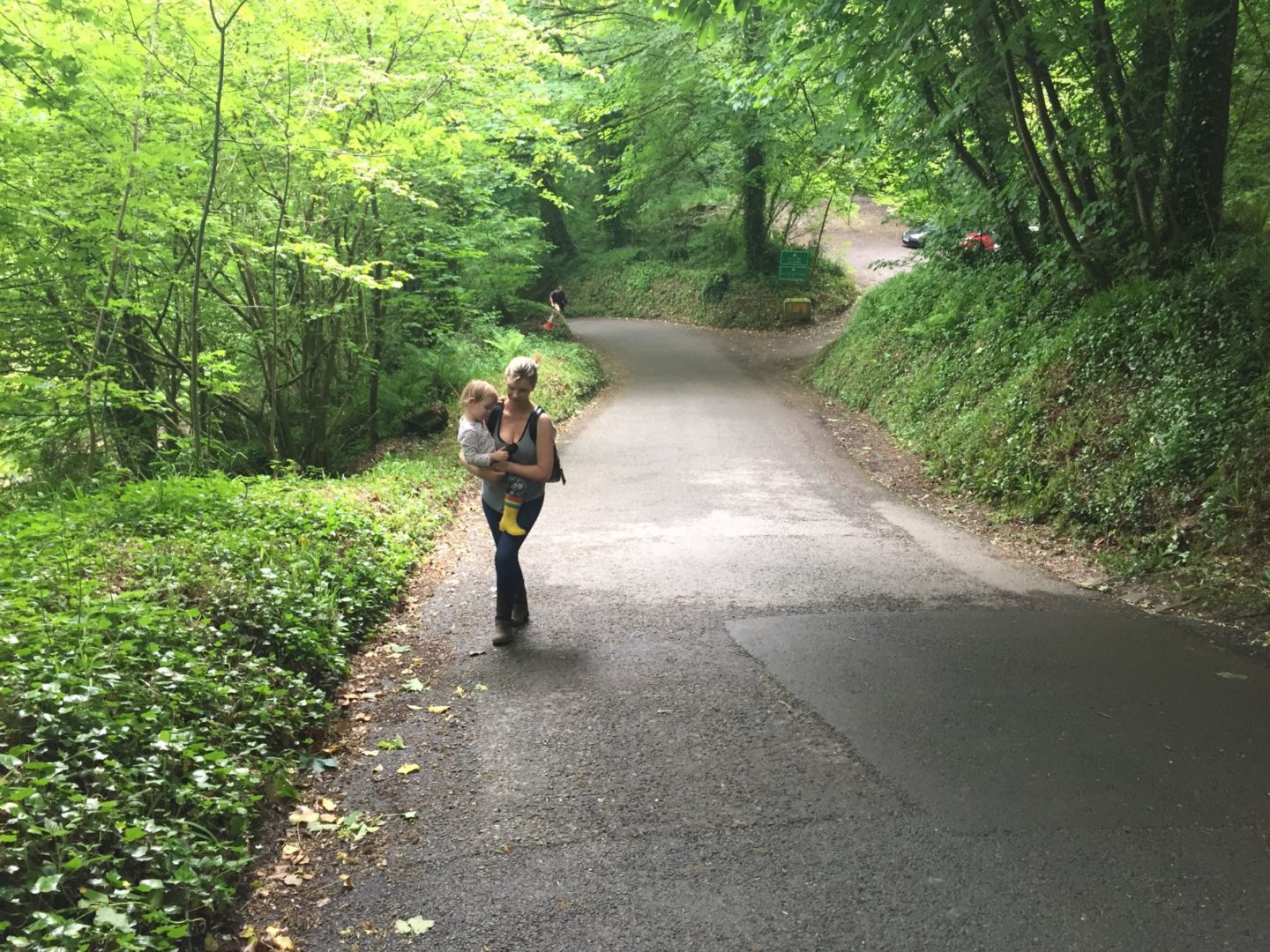 Honestly, at a number of points during the climb I thought that my heart had actually stopped, but it turned out that my heart was just beating so fast that the beats had blurred into one. My vision went cloudy. My hands were tingling. I had childhood memories rushing through my brain and a strange metallic taste in my mouth. (That was thirst, apparently, but let’s not dwell on the specifics.)

It was my idea to walk up the road back to the carpark in Clovelly – Mr AMR was all for piling into one of the 4x4s that went up and down the hill, transporting people who had made it down to the harbour but were unable (or unwilling) to pick their way back up through the village. But no, I won that particular argument and basically became the architect of my own (near) demise. 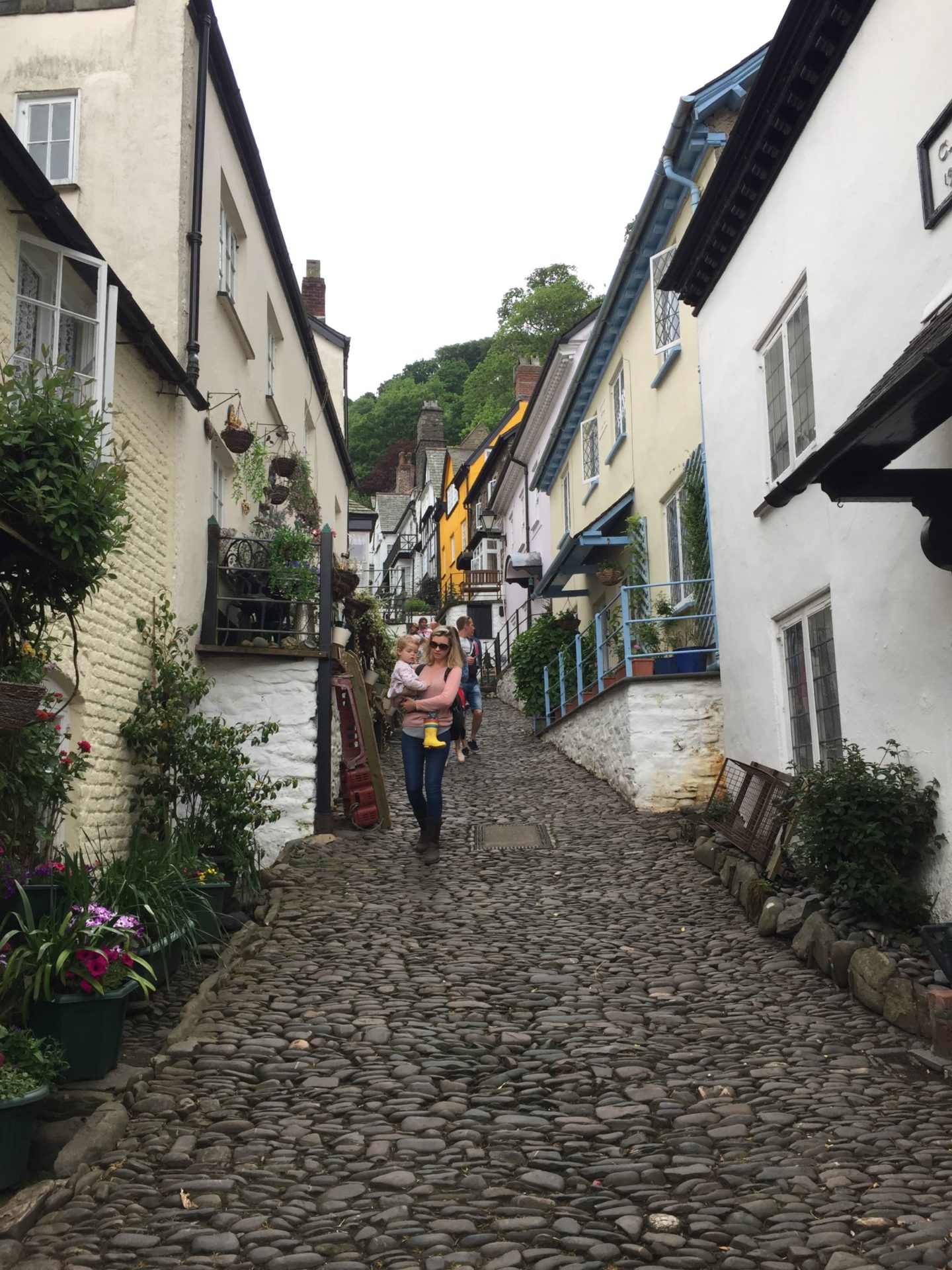 Have you ever been to Clovelly? It’s a gorgeous, unspoilt fishing village in Devon that has what must be one of the steepest inclines in the world. You almost need an abseiling rope to get to the pub. If you took a run and a jump down the main street, which is thankfully pedestrianised, you would most likely injure yourself quite seriously, because – depending on whether you’re a feeble jumper like me (approx distance 60cm) or you’re a jumping superhero like Greg Rutherford (840cm) – you’d find that the ground would be about five metres lower when you landed than when you took off.

I say that the street is “thankfully pedestrianised” but that’s a ridiculous statement. I mean, no vehicle could sensibly pass down it. If you so much as sneezed at the wheel of your car then the force of your head movement could easily tip the balance and you’d be flick-flacking like a tumbling domino, all the way down to the sea, the car turning over and over like in a James Bond movie. (You know, that Bond movie where a woman sneezes in her Renault Clio as she’s driving illegally down the pedestrianised street in Clovelly.) 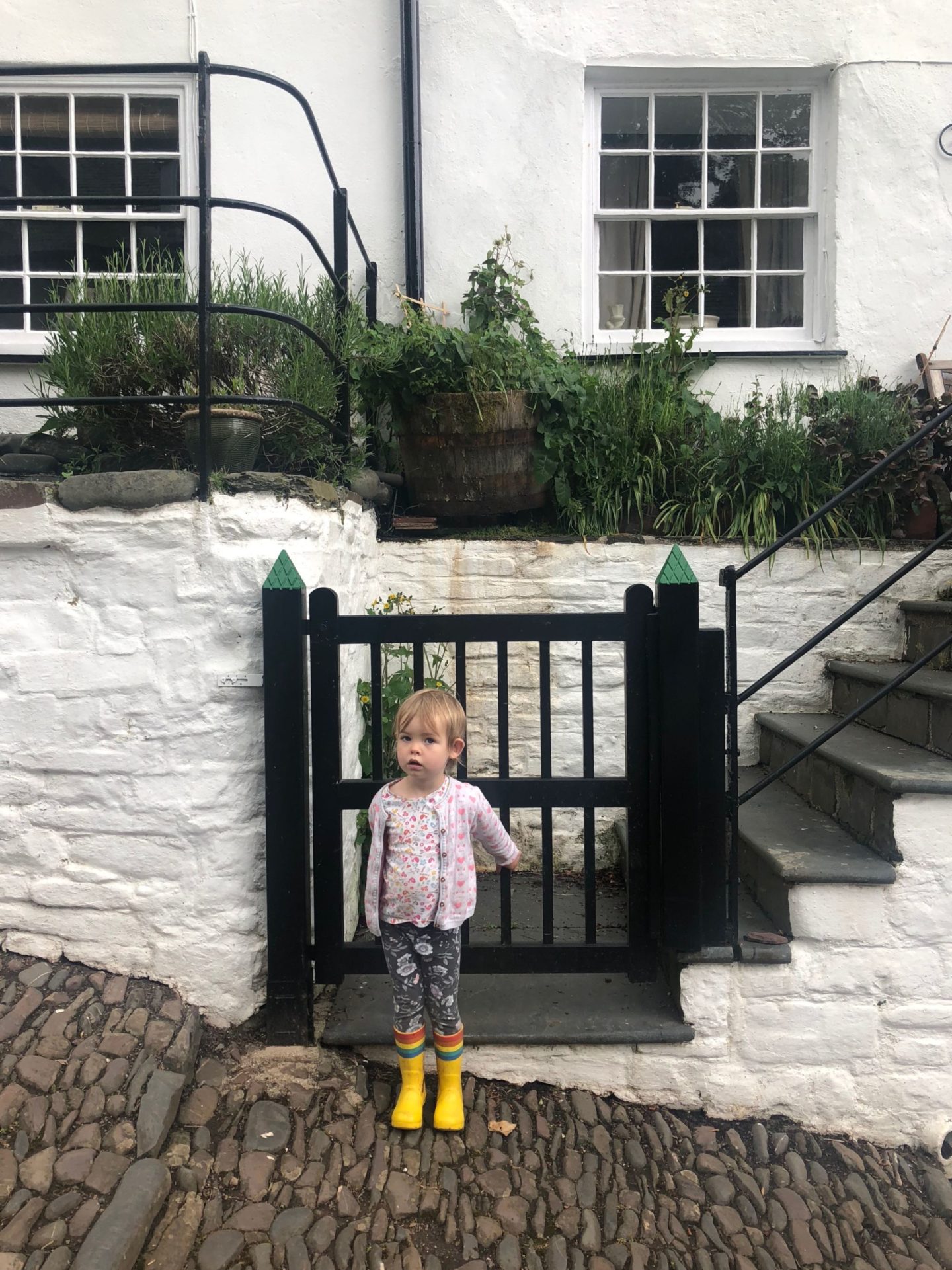 No, there are no vehicles at Clovelly – they made do with donkeys and sledges, apparently. Sledges! Signing your own death warrant, I tell you. Whatever, Clovelly is brutal – you have to walk with those stupid little penguin steps and your feet turned outwards to stop yourself hurtling down the slope. You also have to try and avoid the people who are coming back up the slope, who look at you with a sad, pleading look in their eyes, like they want to be put out of their misery.

But (as I found out) there’s no way you could ask to be put out of your misery when you’re climbing back up, because you can’t speak. If you’re climbing back up Clovelly then you’re focussing on the end game, which is the mad viewing-platform café thing that’s next to the car park. It has cake, water, ice cream and a huge gift shop and it’s like a beacon of hope looming out of the horizon. Sanctuary. A flat surface.

So yes, the perfect place to take two tiny children and an excitable dog. We were fine on the way down, but after a little meander around the harbour at the bottom the fatigue set in and we decided that it was time to go home. There was a queue for the 4×4 service, so we stood patiently in line. No 4×4 arrived.

“Will it be long?” said one elderly lady at the front of the queue.

“How long’s a piece of string?” said the queue-master general. People in charge love saying things like that, don’t they?

After a few more minutes I decided that waiting would be futile and that it couldn’t be that hard to climb back up to the car park and that – anyway – Ted was strapped to Mr AMR’s back, so in effect was weightless (ha!) and Angelica could walk most of the way herself. Probably.

I added to this a bit of a brainwave.

“I know,” I said, “let’s walk up the road way! The way the four by fours go! It’s obviously loads flatter and even if it’s actually a longer distance, it’ll be easier to manage!” 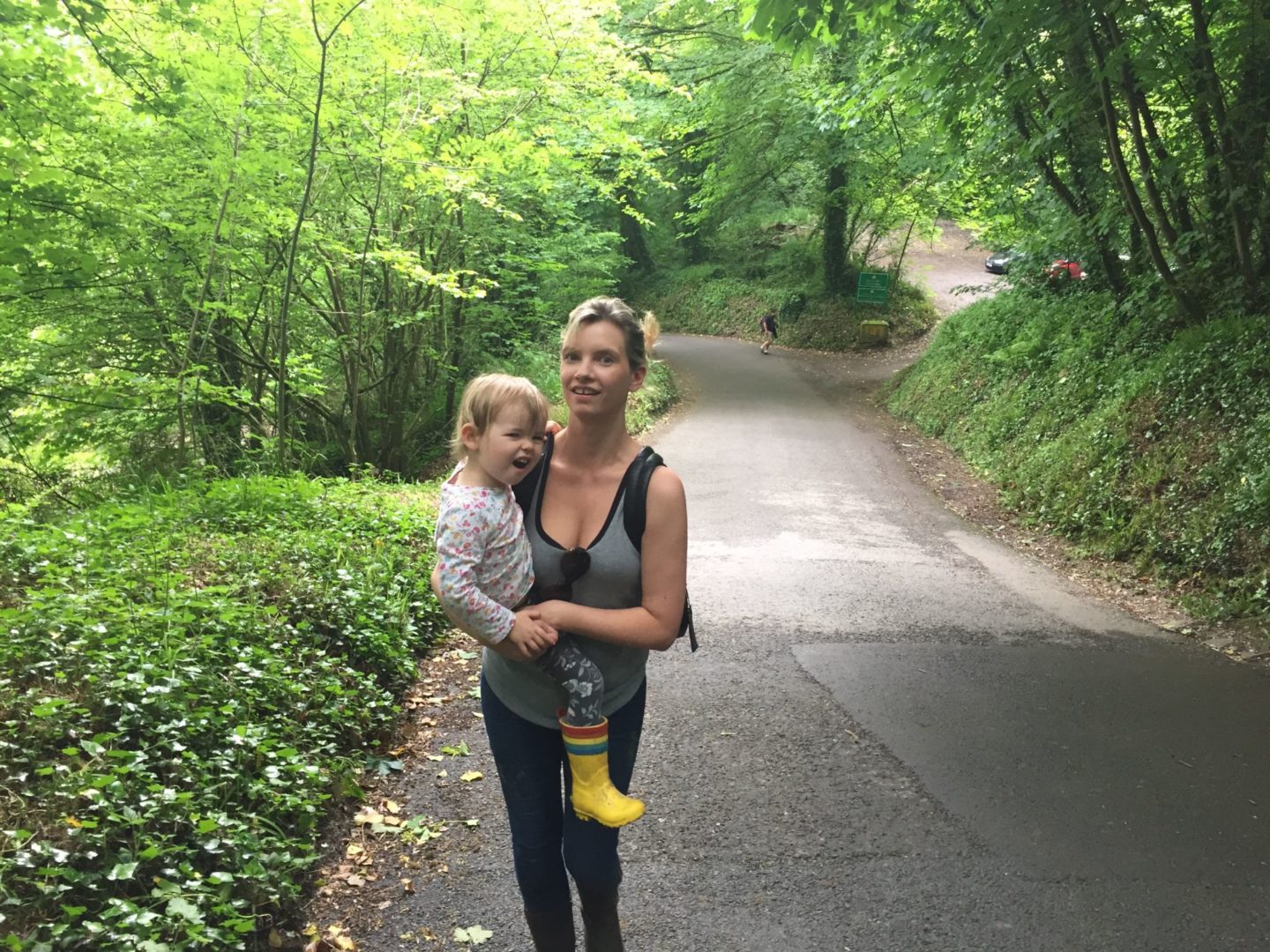 And so, like a weird band of doomed explorers, we started to walk up the road. It was hot. We only had half a bottle of water. Dexter was jumping around like a demented fish on the end of his lead. The crowd in the 4×4 queue looked at us like we’d just stripped off and instigated a conga line. It was a look of pure amazement and a look of pity.

When the same people passed us by a mere six minutes later, the first 4×4 having arrived almost the second we vacated the queue, they slowly turned their heads like cows to watch us stand to the side of the road. Sorrowful. Disbelieving.

When the next lot of people passed us three minutes after that, they witnessed two grown adults walking in such a manner that they looked as though they were struggling against gale force winds. (It was bloody steep, alright?) When the next lot went past in a 4×4, two minutes after that (FFS! why didn’t we just wait?) they no doubt heard me cursing them as I heaved and panted my way up the road.

Does it go without saying that I carried Angelica almost the entire way? And because she couldn’t be carried front-on, like a monkey (it’s impossible to see where you’re going like that), I had to put her on my hip. I was walking like Quasimodo by the time we got halfway up. To make matters worse, I had on some ridiculous jeggings that had obviously never been stress-tested for mountain climbing because they fell down every thirty seconds, which meant that I had to put Angelica on the ground and hoist the jeans back up again. And the fly zip liked to open in between those pitstops so that I was permanently inconvenienced by one sort of jegging malfunction or another. 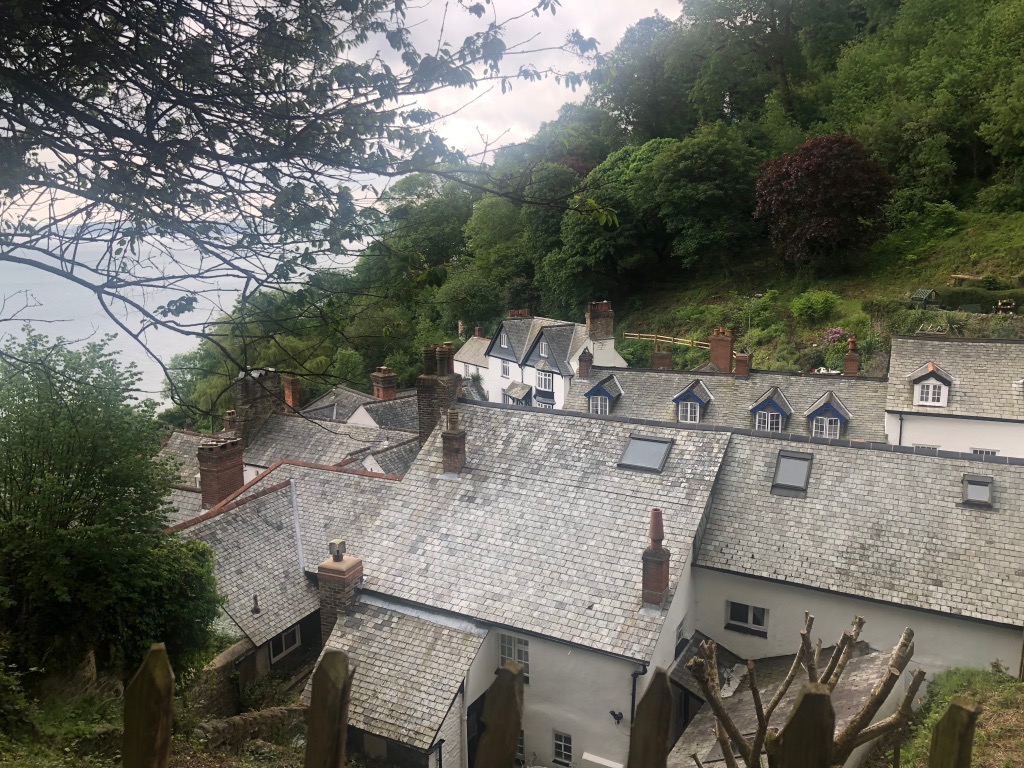 Angelica, meanwhile, was busying herself with parts of my anatomy to keep herself amused on the long and arduous ascent.

Mr AMR, sensing my rapidly worsening physical state, took it upon himself to begin a running commentary and real-time appraisal of my progress.

“Come on Mummy!” he bellowed from his vantage point high above me. “Doing well! Mummy needs to run faster, doesn’t she Angelica? Run, Mummy!”

At one point he waited for me to catch up, which I thought was quite romantic until he darted in behind me and started poking at my bottom. “Let’s poke Mummy’s bottom and make her go faster!” 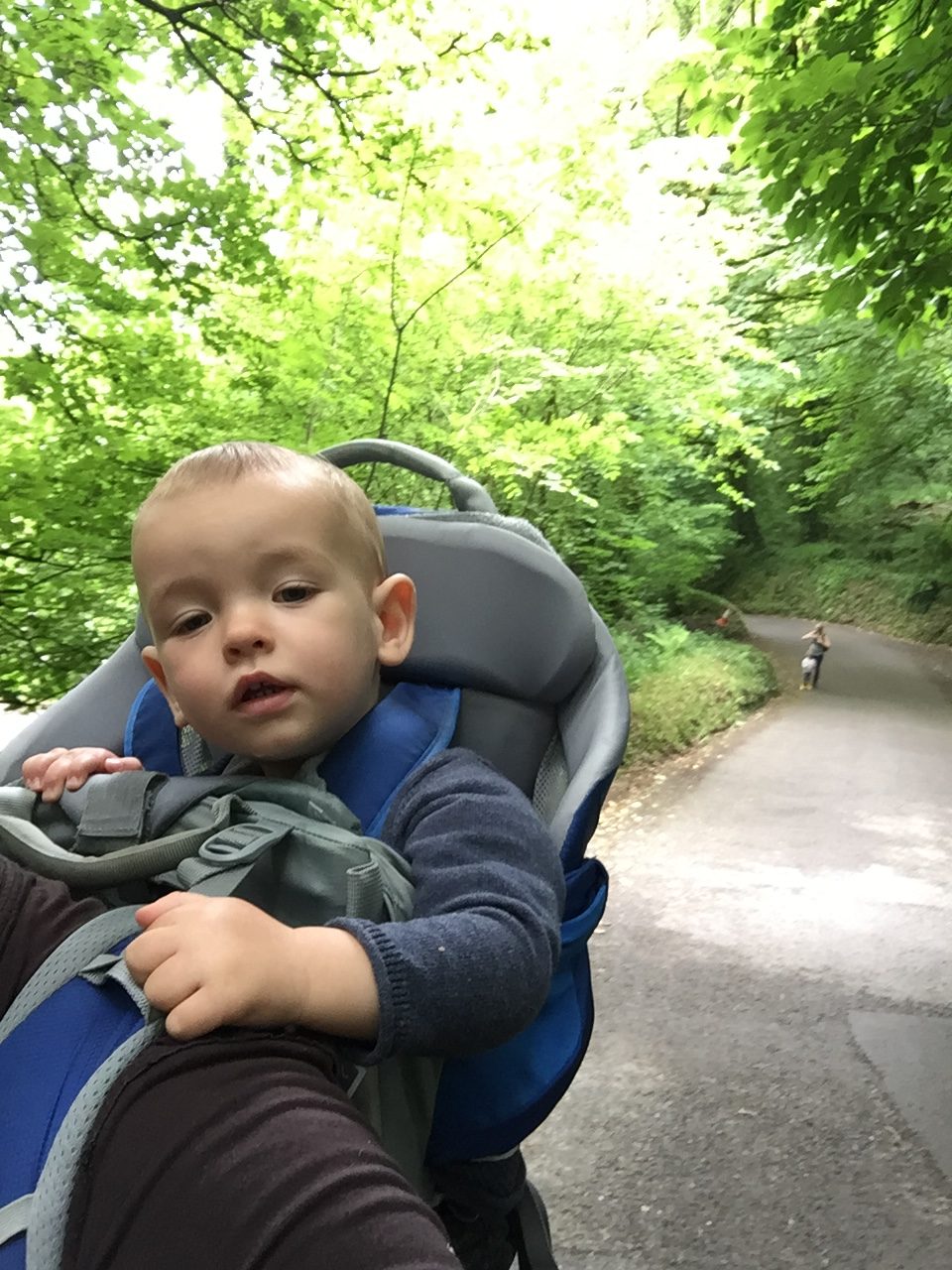 It’s amazing he’s still alive. Though I would never have summoned up enough energy to push him over the side of the hill. I was so tired. My heart was going like the clappers. Every turn in the road promised progress but then just led to another nondescript bend. It wasn’t until I heard the sound of a brass band playing that I had any hope we would make it home in one piece. Surely a brass band signalled civilisation?

And it did – one more corner and we were on the home straight, the path to the coffee shop. The band finished butchering Jerusalem and began a rousing rendition of Congratulations just as we staggered up to the gift shop entrance, Angelica smacking my love handles enthusiastically and shouting “giddy up, yee-hah, superspeed Mummy!”

Never again. Not with cargo. Apparently a US soldier carries, on average, sixty pounds of kit. I had over half of that weight on one hip and it talked incessantly. And played with my boobs.