I’m a bit broken this week. Lack of sleep (I thought we were past those days) and tediously long bedtime sequences have stretched me to the end of my tether. Or stretched my tether? What even is a tether? Whatever (tether), I honestly think that on a bad night our familial “bedtime routine” would be enough to make the toughest person on earth break down and cry. I don’t know who the toughest person on earth is – I like to think it’s maybe Bane from Batman, only because Tom Hardy is inside him (cue innuendo onslaught) – but whoever it is, they would not cope with a particularly testing evening of kid-settling chez moi.

There’s something rather soul-destoying about thinking you’re going to have a small slice of the evening all to yourself and then having it repeatedly ripped from your grasp. When you’re knackered after a full-on day of toddler-chasing, debris-clearing, dribble-wiping activity and you just want ten minutes to sit down on your own before it’s time for bed yourself, doing multiple trips up the stairs to quiet one screaming toddler and then a whole other set of journeys to make sure that the older one isn’t climbing the stuffed giraffe again sends you to the absolute limits of sanity.

And I’m not moaning: just telling it how it is. It seems to be like this for most people, so I feel I can give you an honest portrayal. Those adverts where it’s all calm and peaceful, and there’s a curly-haired little girl lying in bed listening to a story, her eyes slowly closing, the parent gently pulling the duvet around the child as she falls asleep and then kissing her on the forehead and tiptoeing to the bedroom door: it’s bollocks. At least it is in my house. And in the houses of virtually everyone I know. 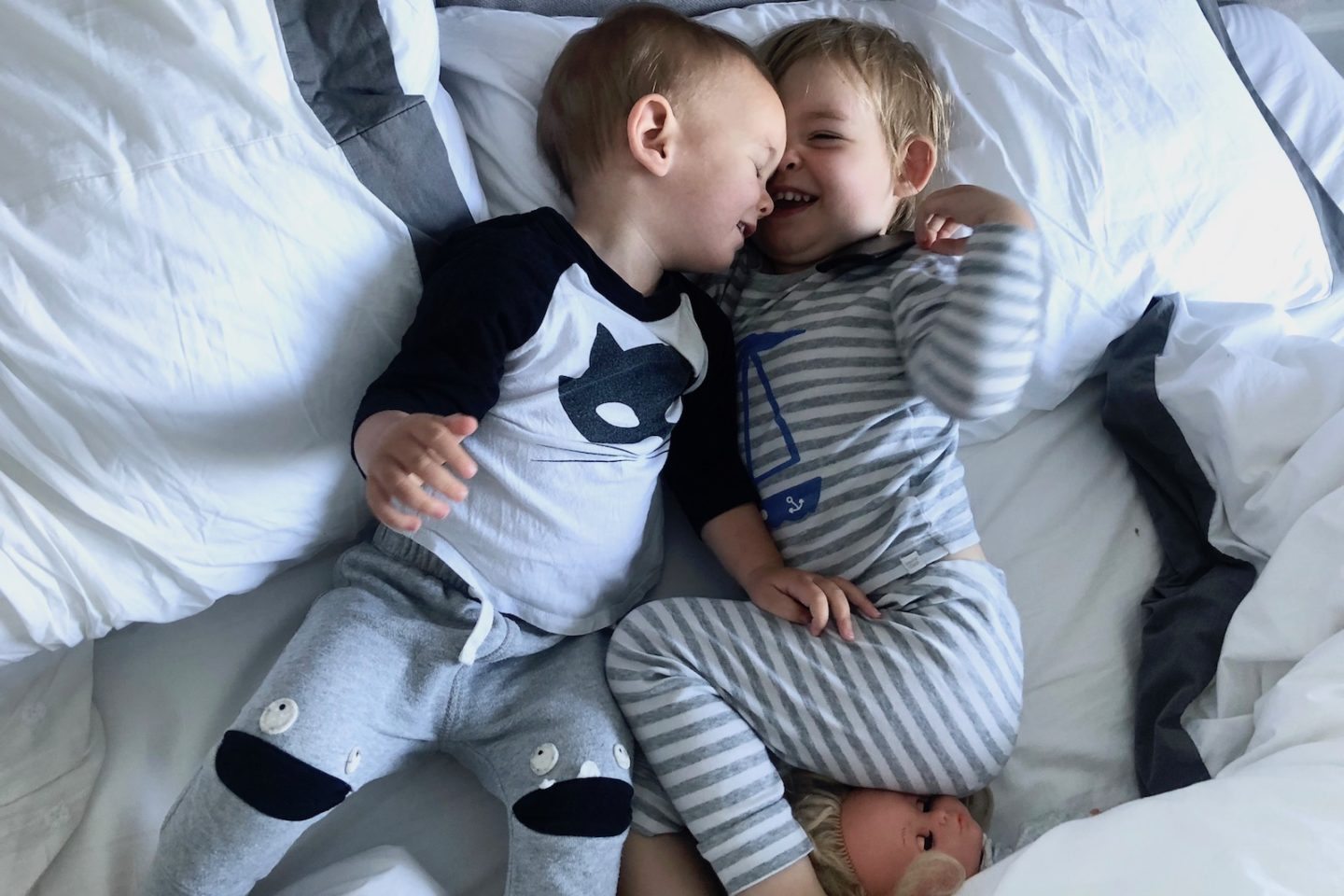 Bedtime is a sort of battle. If you win it and they are in bed on time (ha!) and nobody (adult) has cried and nobody else (child) has walked into a door-frame/bedpost/wardrobe/wall or made you feel guilty for “being cross” then you feel absolutely on top of the world. If you lose the battle, you will eat cereal for dinner, hunched over the table at 9.57pm, eyes half closed, scrolling through Instagram and snarling at people’s holiday snaps.

And then there’s the middle ground, which is what happens most nights, when there’s been a truce between warring armies – or, more accurately, everyone is so knackered that they’ve eventually just gone back to their own camps. The camp of Slumber (them) and the camp of Kitchen (you). You will have already spent an hour or so in the kitchen, by this point, trying to cook a meal at the same time as watching two different baby monitors, like some crazed gameshow contestant.

You will have ascended and descended the staircase approximately twelve times, carrying various bits of cargo such as the water bottle, the baby wipes, the 1 tog baby sleeping bag, the 2.5 tog baby sleeping bag, the remote control for the Dyson fan, the remote control for the Velux blind, the blanket with the maps printed on it, the blanket with Transylvania 3 characters printed on it, the pillow case for the doll’s pillow, the doll, the dolly’s pram, the book about the postman.

This is all before you’ve eaten your dinner and begun your own bedtime routine, which – if it’s anything like mine – involves forgetting where things are over and over again, trying to find them and getting increasingly stressed out about how late it’s getting.

10pm: start preparing for bed. 10.03pm: attempt to locate iPhone charger. 10.08pm: locate iPhone charger, plug iPhone in to charge in kitchen. 10.10pm: start to run bath, go to sit on toilet, realise you can’t find iPhone. 10.24pm: silently scream because you still can’t find your iPhone. 10.28pm: mop up water that’s overflowed from the bath where you left the taps running. 10.32pm: return mop to utility, passing by your iPhone that is charging in the kitchen. 10.32pm-11.36pm: repeat lost-and-found routine for items such as hairbrush, laptop, car keys, house keys, alarm fob, purse, knickers. 11.37pm: locate laptop, randomly decide to log onto Tesco Clubcard site to see how many points you have. 1.45am: finish looking at reviews of local safari park, including Bill from Teeside’s offering, in which you learn that the “muffins in the breakfast place are underwhelming”, decide that you will cash in your points another day.

And Ted has decided to throw another element of chaos into the bedtime mix: an 18 months “sleep regression”. He wakes up at random times, usually when your eyes are just getting heavy and you’re doing that delicious slide into unconsciousness, and he SCREAMS. Like something from a horror movie. Last night was a climax of misery when I was on my own and he cried for three hours – midnight until 3am – and would not be comforted by anything. Not even getting into bed with me, which I never allow as an absolute rule (can’t sleep with small people, I’m paranoid about rolling on them) and not even being fed an Ella’s Kitchen yoghurt pouch, which is like the gold standard of nighttime emergency measures. There was no temperature, no sign of illness – he actually laughed each time I went in to comfort him – and he was well fed and watered.

Today I feel as though I have a medium-strength hangover. My head hurts, I feel vaguely sick and I have that awful day-after guilt – what happened last night? What did I say? Why can’t I just be nice? Am I just a shitty person? Because it’s hard to retain a soothing, loving voice when it’s the middle of the night and you can barely see for tiredness and the racking cries are echoing through the house like they’re on a loudspeaker. It feels like you’re being tortured! 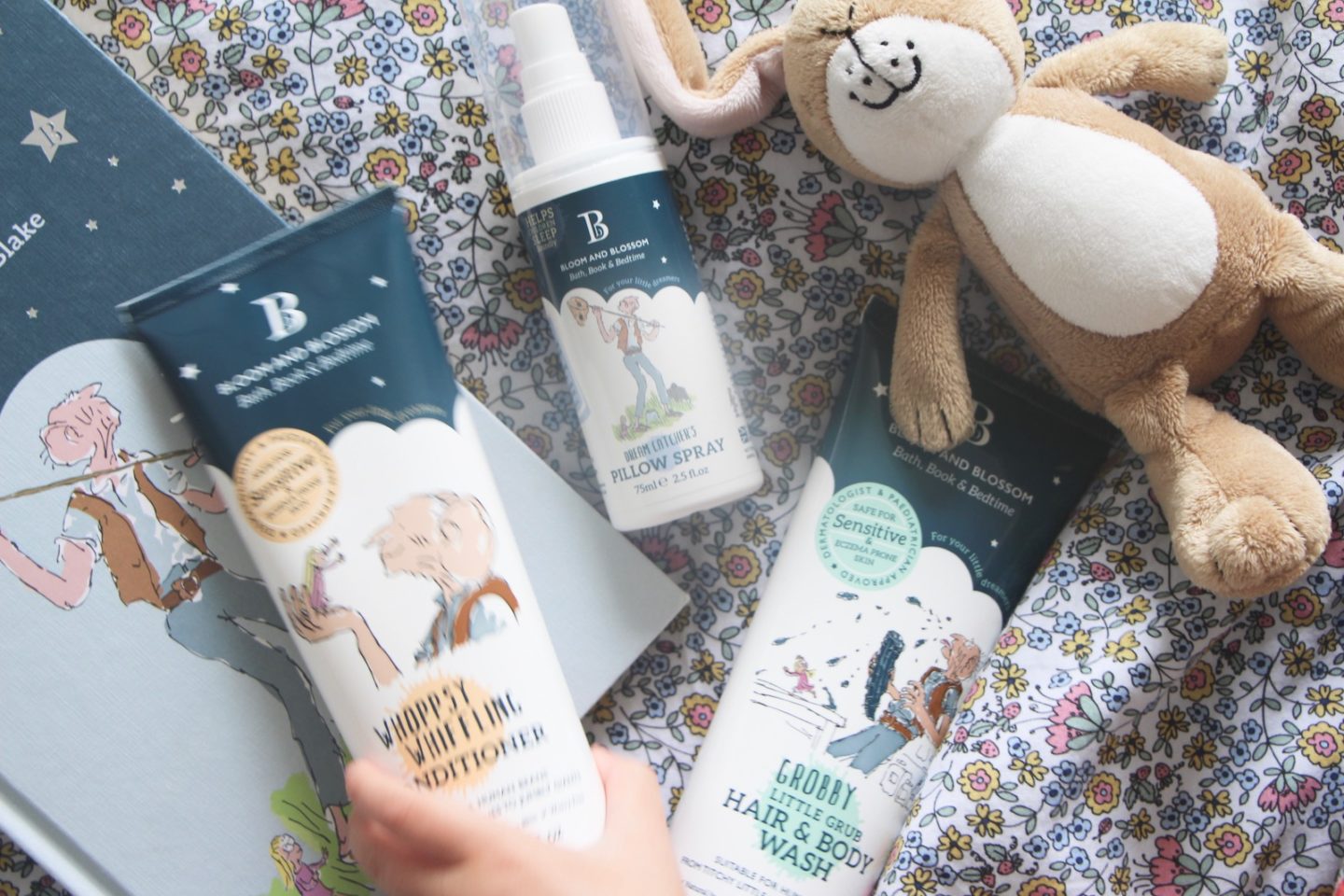 Well. This was supposed to be a cute little post about bedtime routines and gorgeous sleepy bath and body products. But if I told you that I spritzed Ted’s cot with a special pillow spray and it made him sleep I’d be deceiving you. If I said that I sprayed Angelica’s pillow and she immediately drifted off I’d be an absolute liar. In reality, I spritz her pillow and then she (variously, depending on what day it is) demands I sing Little Miss Muffet, asks me to tell her a “story from my head”, declares that she needs another wee-wee or a fresh piece of tissue “for her eyes” (she likes to dab at them in a worryingly dramatic way, I’m sure she’s going to be an actress) or requests a sip of water from her beaker.

Regardless, it has become a habit to spray Angelica’s pillow with the Dream Catcher’s Spray from the wonderful brand Bloom & Blossom and I think that the association between sleep and the soothing smell has to be a useful one. It’s the very last thing I do before kissing her goodnight and leaving the room – three spritzes onto the pillow, Angelica kneeling away with her hands covering her face in case the “spray gets her eyes” (told you, drama school!) and then head onto pillow, a little exchange about how lovely the spray smells and it’s bonne nuit, I love you, don’t go running about upstairs tonight or there’s no zoo tomorrow!

I don’t know what I love more about this sleep spray; the smell – which is less lavendery than the rest of the offerings on the market, more complex and deep – or the name. Dream Catcher’s Pillow Spray. It’s part of a range that’s a collaboration between Bloom & Blossom (maker of amazing body products) and the Roald Dahl Story Company and I have to say that it makes a blessed change from all of the bloody Peppa Pig and PJ Masks licensing deals that have taken over the world.

And the idea behind Bloom & Blossom‘s collaboration is just utterly lovely too; Bath, Book & Bedtime promotes a positive night routine, with the emphasis on reading and having a daily storytime. The products in this particular range (pillow spray, body wash, conditioner and so on) are all inspired by The BFG and the packaging carries the Quentin Blake illustrations from the original book. 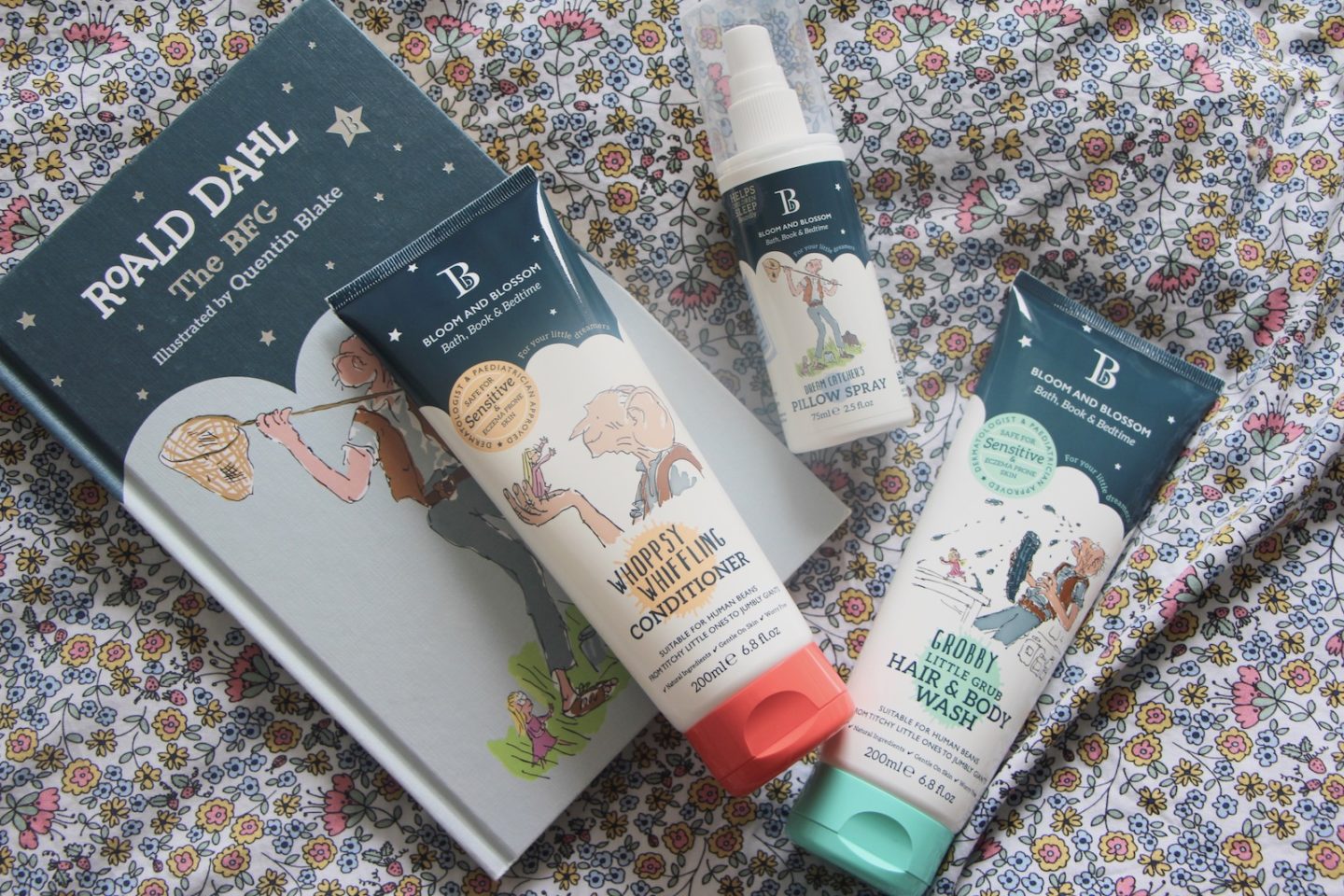 I suppose I’m a bit won over by this BFG connection; it was one of my favourite books when I was growing up, along with Stig of the Dump* and The Indian in the Cupboard*. But mostly, I just like the magical spin that it puts on the bedtime routine – it makes me feel more relaxed about proceedings even though I know they’re not likely to be straightforward.

You can now find the lovely Bath, Book & Bedtime range at Waitrose here* – it’s £9.99 for the sleep spray and £4.99 for the tubes of body unguents. The bath products (shampoo, body wash, conditioner and so on) are very gentle and have a subtle scent and – importantly – don’t set off Angelica’s eczema, so they’re safe for pretty much anyone, I’d like to think.

Right, off for a nap – I can’t function on four hours’ sleep! Has anyone else experienced the so-called “18 month sleep regression”? Any tips?