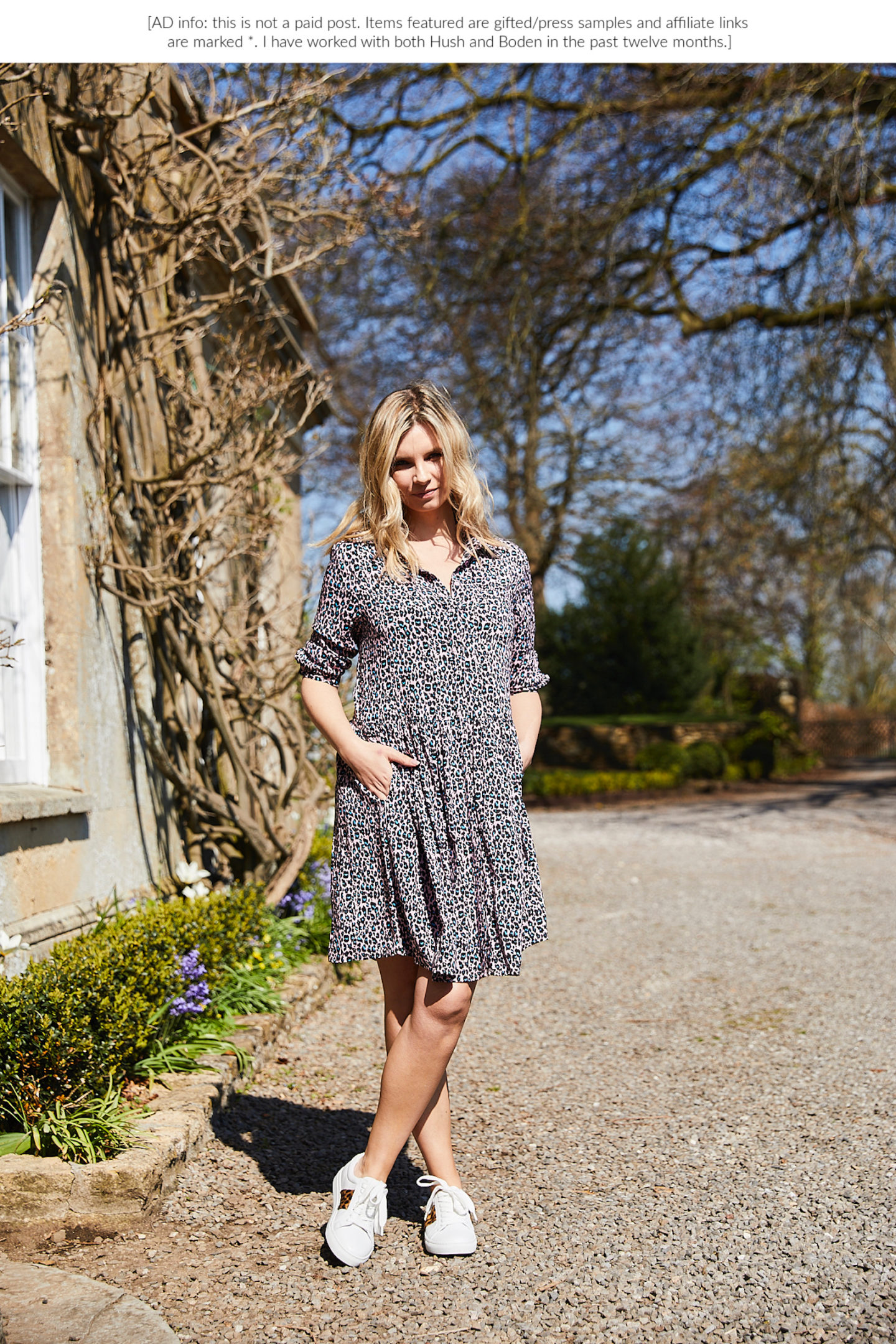 Rejoice, rejoice, the Emanuelle dress from Hush is – I can declare – the perfect garment for eating in. And I don’t mean any old eating, obviously; eating is rarely an act that’s impeded by your clothing.  You can eat in virtually anything, really, except for a deep-sea diver’s suit or maybe one of those rubber fetish one-pieces that have the head totally enclosed, a bit like the Blue Man Group costumes but, er, shinier. They might be hard to eat in, because there would be no hole to poke the food through. Although some of them have zips over the mouths – apparently! – so I suppose you could always sneak a quick morsel if severe oxygen deprivation/being spanked on the bottom with a ping pong bat/being chained to a kennel/etc was making you peckish. Pop a handful of salted peanuts in or quickly chomp through a Kit Kat.

“I can hear crunching down there. Are you gnawing your way through the crate? You know what happens to bad dogs who gnaw their crates…”

So yes; when I say that this dress is good for eating in I don’t mean the run-of-the-mill, pain quotidienne, sustenance kind of eating, I mean full-on, banquet-style scoffing. Gorging. The type of eating that requires all clothing from the chest downwards to be heavily elasticated. The sort of eating, then, that I tend to do with Mr AMR every time we go out for dinner, because – dear readers – we can never make head nor tail of these confusing menus with their sharing boards and their “little plates” and their stupid, stylised pricing systems that say 8.5 instead of £8.50 and in our bewilderment (“excuse me; how many dishes do we need between the two of us, please?”) and in fear of ordering a disappointingly sparse meal (“are you sure the satay will be enough?”) we often end up over-ordering. And then, when it all arrives on the extra table that they have to dust off and wheel in from the store room to serve it all, creak, creak, we are forced to finish every last speck. Because Mr AMR cannot and will not waste food. And I just do it because I can’t bear to lose face – “of course we meant to order enough for eight people!”

Last week we went to an excellent Thai restaurant and mistakenly ordered around three times what we would normally eat at home. Just one of the starters would have provided more than our usual protein – for two of us! – and we had three starters. Then two mains. I think maybe a spicy side salad. A waffle with coconut ice cream. Granted, the dessert was totally my bad – it just felt wrong not to finish off the meal properly – but the rest of it was mis-ordered out of total and utter confusion. “Don’t think of it as starters and mains!” proclaimed the menu. “Order lots of dishes and share!” So we did. Oh, we did. 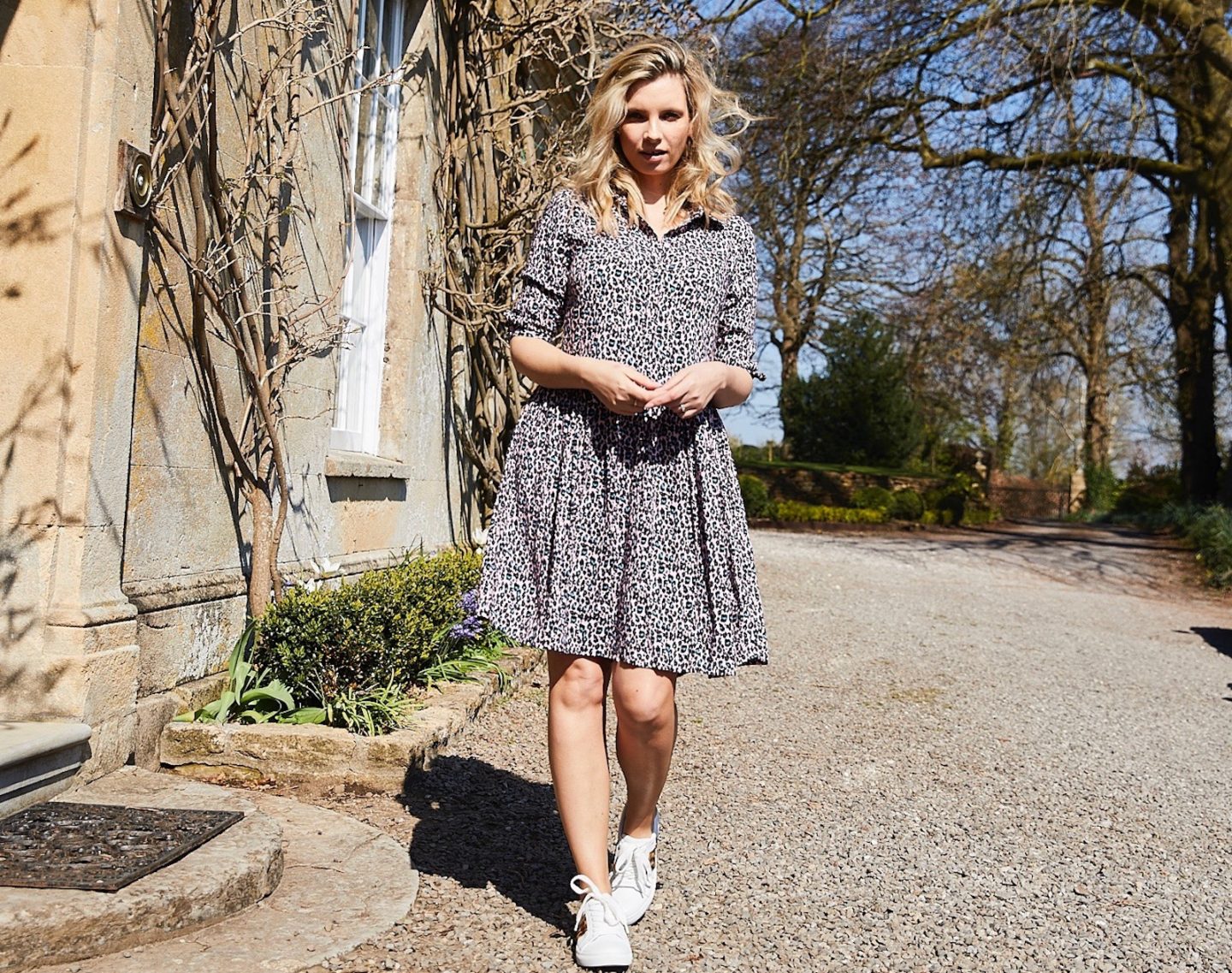 Anyway, to cut a long story short (and I must say at this point that it’s an absolute blessing that we have two small kids, therefore rarely go out for proper dinners); the Emanuelle dress came in very handy. As it has done on numerous other occasions, because I have it in other prints from past seasons and it’s one of my “staple” dress shapes. The relaxed fit around the waist gives great opportunity for girth expansion, but at the same time, that’s not because it’s elasticated – never does it look stretched or straining, even at full capacity – it’s just a very clever cut. A dropped waist, I suppose you could call it, that skims from boobs down to hips. The eye just assumes that there’s a waist beneath it, when in fact there’s a Pad Thai-stuffed torso that’s as round and hard as a barrel. 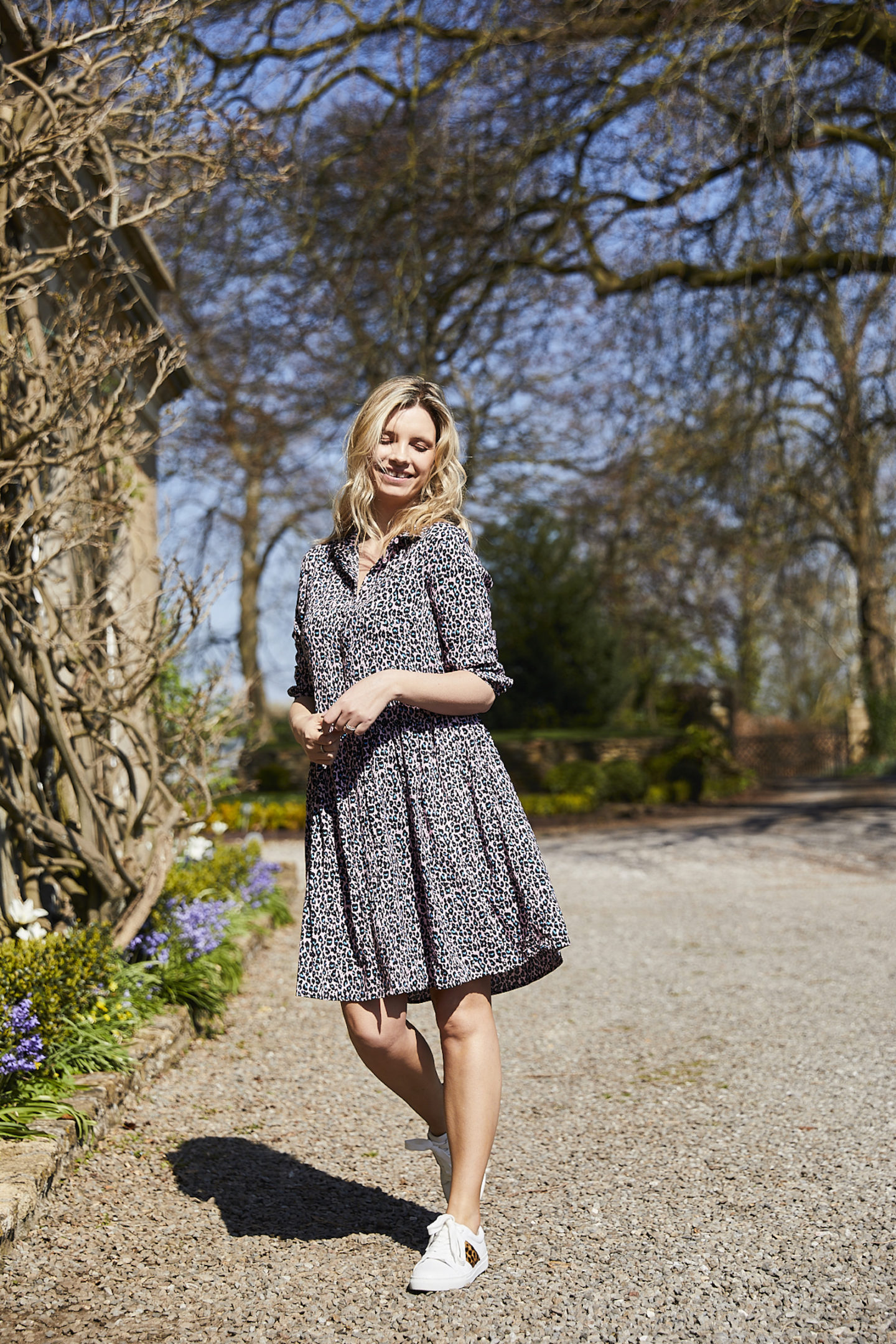 But I’d be doing the Emanuelle dress a disservice if I didn’t mention that it’s also unutterably chic – this isn’t just a dress to go eating in, it looks brilliant at all times. To be quite honest, if it only looked good when I was eating up dishes that should never have been ordered in the first place I’d be wondering whether it was just a too-big dress. I mean, there’s a massive difference between a dress that’s far too big and only fits you when you’ve eaten your own bodyweight in tacos and a dress that is cleverly cut so that it allows for expansion. One’s a mistake, the other is a feat of engineering that should not be underestimated. A service to mankind. Well done Hush. 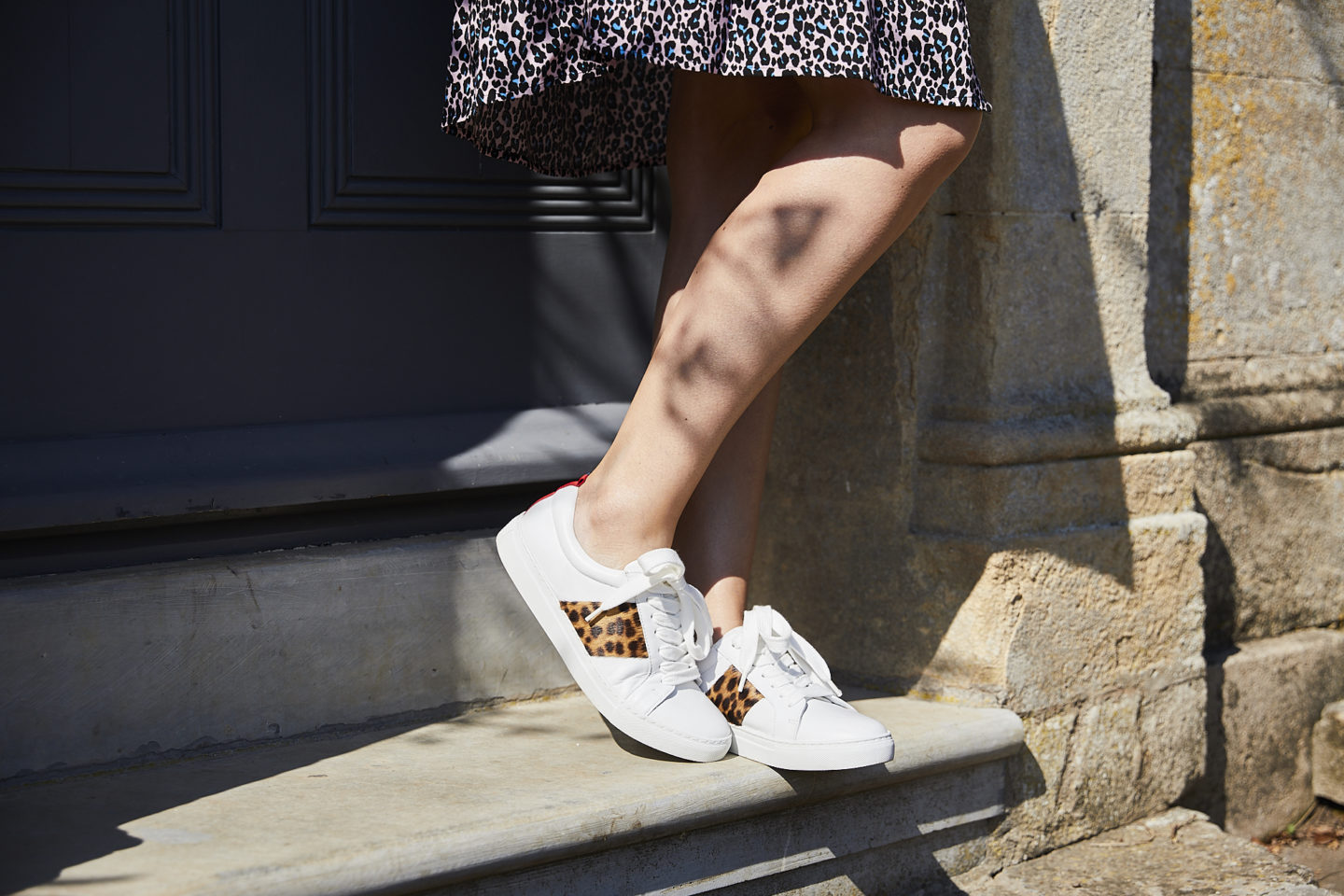 Another excellent thing about Emanuelle, apart from the fact it’s a) the subject matter of one of my favourite sing-along hymns and b) a very racy film (different spellings but what’s a slip of the pen between friends?) is that it looks great with trainers. The cut is actually very girly and pretty, with the twirly skirt, so trainers look like an intentional juxtaposition (hark at me) and not just laziness. I particularly like plimsolls, fresh from the box, but I think mostly because the smell of the rubber makes me nostalgic.

(Nostalgic for school days, I hasten to add, in case you really do think I like fetish suits! True story, I once had to be fitted for a full body latex suit because I was going to play a superhero in a TV ad. I felt sick with claustrophobia. I had to be talcum-powdered into it (otherwise the latex sticks) and as soon as I was in, which took about three months, I needed the toilet. It was awful. And I didn’t even do the job because I got ill.) 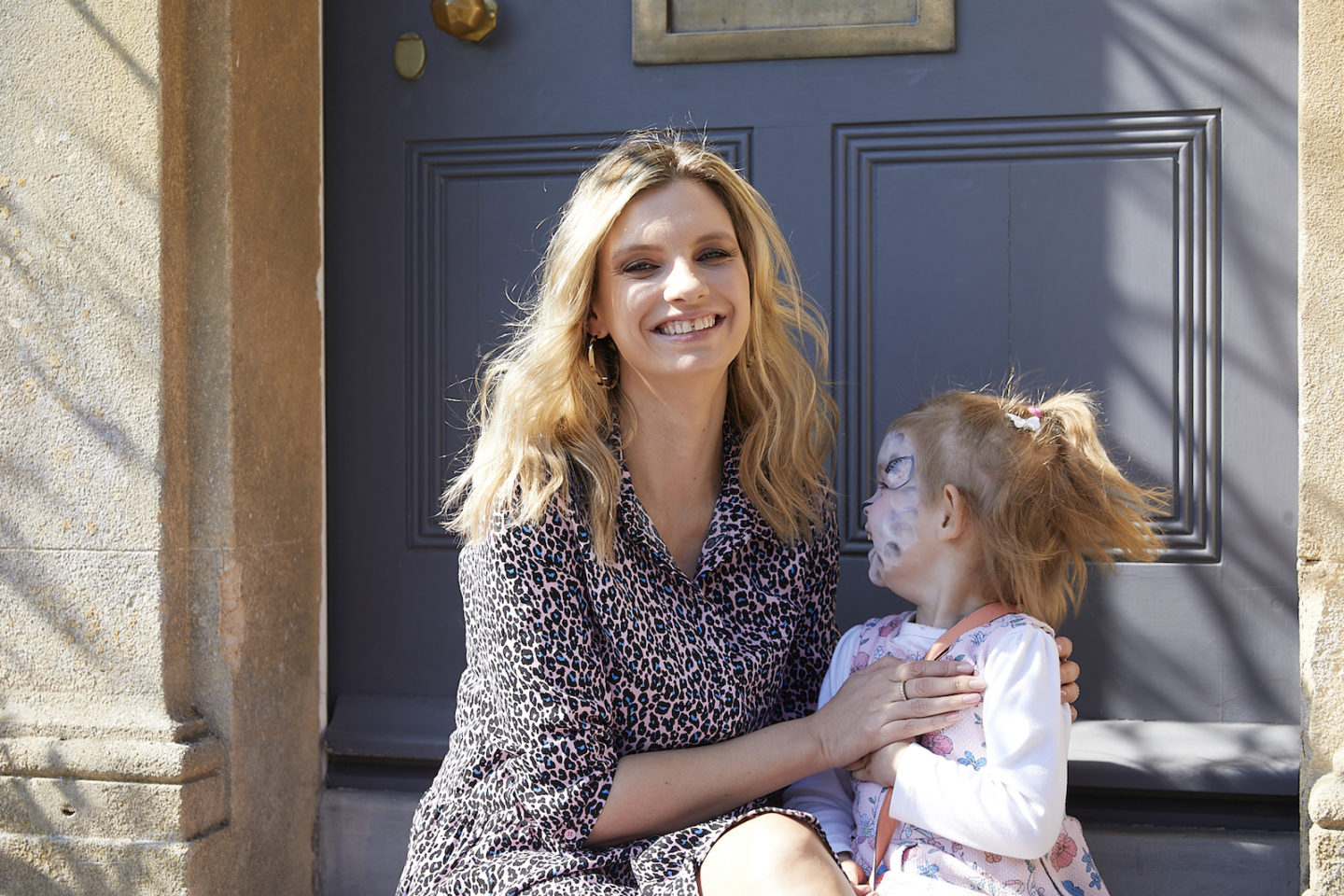 I’ve gone on numerous diversions in this post when it was supposed to be just a quick little ditty outlining the many merits of a very comfortable, yet very chic, dress. So let’s wind this up with some facts: I love that the top half is like a shirt dress (adore shirt dresses) and that the bottom is twirly and feminine. I love the animal print, though they do different prints each season and they’re always great, and I love the length, which is not too short.

(Though warning: it will reveal knickers if you wear it to ascend or descend the escalators at Holborn tube station, where there’s always this weird, near-apocalyptic wind that’s so strong it blows people’s hats off and has them struggling, hunched, to reach the safety of the ticket hall level. It’s a weird old weather dynamic down there – has anyone else noticed? It’s like you’ve entered another world, one that’s currently experiencing gale-force winds, yet there’s no sky. You’re just in a series of tunnels. Very odd. If anyone from TFL is reading and can shed light on the matter for us…)

Yes, then; it will reveal pants if the gust is strong, but I always find that tying a lightweight cardi around my middle helps to anchor things if I’m rushing around the capital. Ooh – it’s also breastfeeding friendly, which I just confirmed by pretending to nurse a sack of Braeburn apples. There’s nothing not to like about this dress.

You can find the Emanuelle (REJOICE! REJOICE!) at Hush here* – it’s £65. I wear a 10, and I’d say that it’s true to size but generously so. I’m a large 10 – I tend to order a 10 and a 12 for everything I buy and send back the wrong one, because I’m really sitting right on the cusp – so if you’re dithering between sizes then probably go for the smaller of the two.