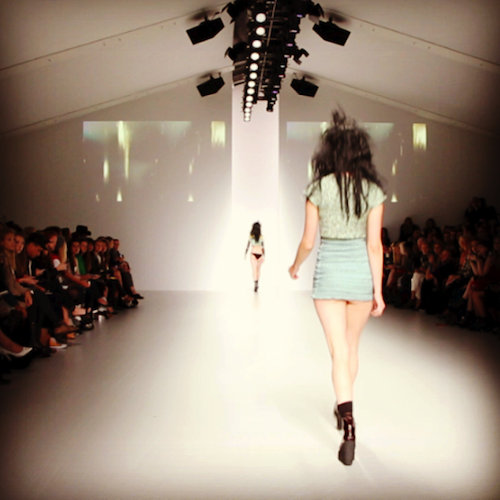 Ways to die at fashion week. Just some morbid musing that I did whilst waiting for a bus, in the rain, with blister-covered toes and a possibly dislocated shoulder/back/neck/brain.

1) The most likely cause of death at fashion week? Tripping up on the cobbles at Somerset House in your sky-high heels, hitting the ground and then breaking your neck. People probably wouldn’t even run to help you – they’d think it was another one of those stupid “arty demos” that keep happening, like the coffin that was carried through the courtyard on Saturday. Even if the spectators thought you were genuinely dying they wouldn’t help you – because they’d all have heels on too and so they’d be risking their own necks by trying to save yours. Anyway – cobbles. Who thought that up?  “Hold on – HOLD ON, I have an idea! Why don’t we hold a fashion event where everyone will be really dressed up and wearing stilettos.” “Where should we hold it, this huge event that we should call fashion week?” “Hmm. Leave it with me. I’m pretty sure there are no cattle grids in London – cattle grids would be ideal, really. But failing that, I’ll look for cobbles.”

2) Dying of shame when (in the very rare instance) you are caught sneaking a seat in the front row when actually you’ve been given a standing-only ticket.  I’ve seen it happen. It’s literally like being caught shoplifting in a sex shop. (I imagine.) Having to turn out your pockets to reveal a huge rubber wanger and some furry handcuffs has NOTHING on the shame of getting caught out illegally upgrading your LFW ticket.

3) Sliding on an empty carton of Vita Coco coconut water. Last season it was all about Vitamin Water – at least these were fairly rigid and thus rolled away from you when you stepped on them. The Vita Coco squeezes and slides. As you try to elegantly make your way out, post-show, you will slip and slide on the Vita Coco. It’s the LFW’s version of a banana skin. They should leave them lying about on the cobbles for a double-whammy death risk.

4) Drinking too much Vita Coco coconut water and dying of dehydration brought on by 26 continuous hours of having the runs. Vita Coco is being touted as the ultimate re-hydrator. Believe me, after you’ve lost approximately 17lbs of bodyweight down the toilet* you’ll be feeling less than hydrated. Death-dodge handy tip: do not drink too much coconut water. Resist the Coco. (*not me, obviously. I don’t go to the toilet, I’m like the Queen. I’m talking about someone else. A friend of a friend.)

5) Walking straight through a plate glass window because you think it’s a doorway because your glasses are so dark that they’ve rendered you virtually blind. Death-dodge handy tip: indoors, you don’t need your shades on. Taking them off will help you detect those annoying times when another spacious room that looks identical to the one that you are in is, in fact, a mirror. Or a wall made from sheet glass. Do you really want to be the first person to die falling out of the 32nd floor of Heron Tower because you kept your sunglasses on and walked straight through the glass? Wheee!

6) I’m sure I could think of a few more. I just don’t want to jinx myself. I’ve already come close to being a cropper with 1, 3 and 4. Next fashion week I’m going to take Immodium and wear mountaineers’ crampons.