Where have I been? You might well ask. Just the small matter of a lopped-off wisdom tooth and a sewn-over gum. Who would have thought that such a small area of the body could cause such widespread havoc? I swear I can feel the throbbing in my toes during the hour that my painkillers stop working. (An hour before I’m due the next lot, the previous dose of painkillers seem to wear off – it’s like clockwork. And all of a sudden I go from a normal person, existing in a normal way, to someone who is internally combusting inside their own face.)

Anyway, I have been offline and sleeping as much as possible, because on top of the tooth issue (it was a coronectomy I had, due to the facial nerve being too close to the root of the wisdom tooth, making it risky to remove the whole tooth) I’ve had a bad cold, a cough, and two small people to run around after. So you can imagine me propped up on a pile of cushions, trying not to mouth breathe but being forced to eventually succumb because of the blocked up nose, and not wanting to blow said nose because of the pain the pressure causes in the mouth. What a bundle of laughs I have been. 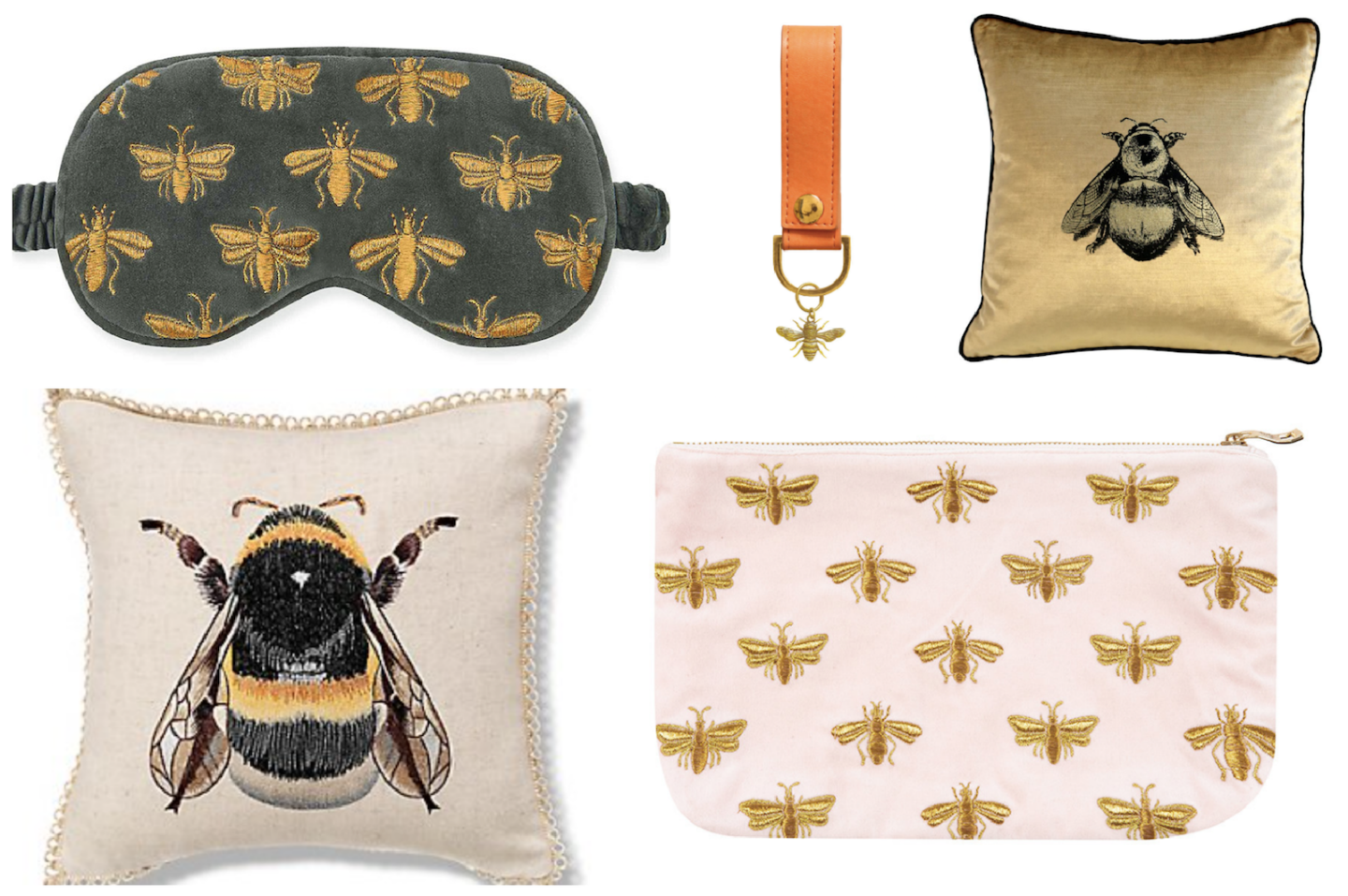 But at least I’ve spent my time off wisely – developing an obsession with bees. Bees used as a motif, not the actual real-life bees, though apparently real bees are necessary for the survival of mankind – indeed, the survival of the planet. Ironically, they are the only insect not to have made it through the cracks in my bedroom window and into the warm – I’ve had a ladybird infestation, woodlice, some flies, a spider as big as a side plate and various long, weird things with lots of legs. No bees. But since I plugged up every single gap in my creaky, beautiful Georgian windows with toilet roll I haven’t had any unwelcome visitors at all, so that’s an achievement to put on my CV. Also bog roll is cheaper than double glazing, as it turns out, and doesn’t get me on the wrong side of English Heritage and their Listed Houses rules. Bonus achievement.

Here are my favourite bee things – I’ve ordered some of them already, as Christmas presents, but I may have to go back for another M&S cushion because it’s such an absolute steal! 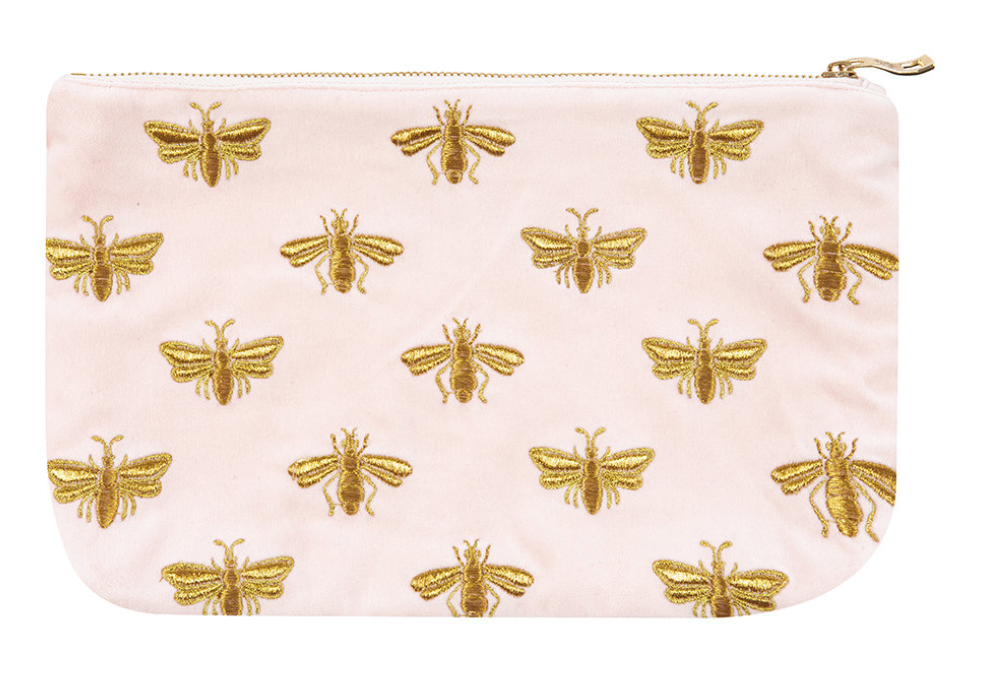 I’ve something of a (costly) penchant for Elizabeth Scarlett stuff – she makes the most beautiful makeup bags and small accessories. She’s always right on the button with her designs – palms, pineapples and now bees.

This gorgeous new design comes in charcoal or pale pink – I’ve bought the makeup bag in charcoal (£25 here*), but I think that the eye masks* are equally delicious.

I thought this key-ring was very smart; I’m not particularly a lover of key-rings as I only have one set of keys and I can never bloody find them anyway, but I do quite like attaching things to my travel bags or carry-on suitcases so that I can identify them easily. Whatever, I’m waffling aimlessly, but this would make an excellent little stocking filler, if you’re already on the hunt for Christmas presents. (Gah!) It has something of the Hermes about it (luxury goods store, not sh*tty parcel delivery service) and costs £12 from John Lewis here*. 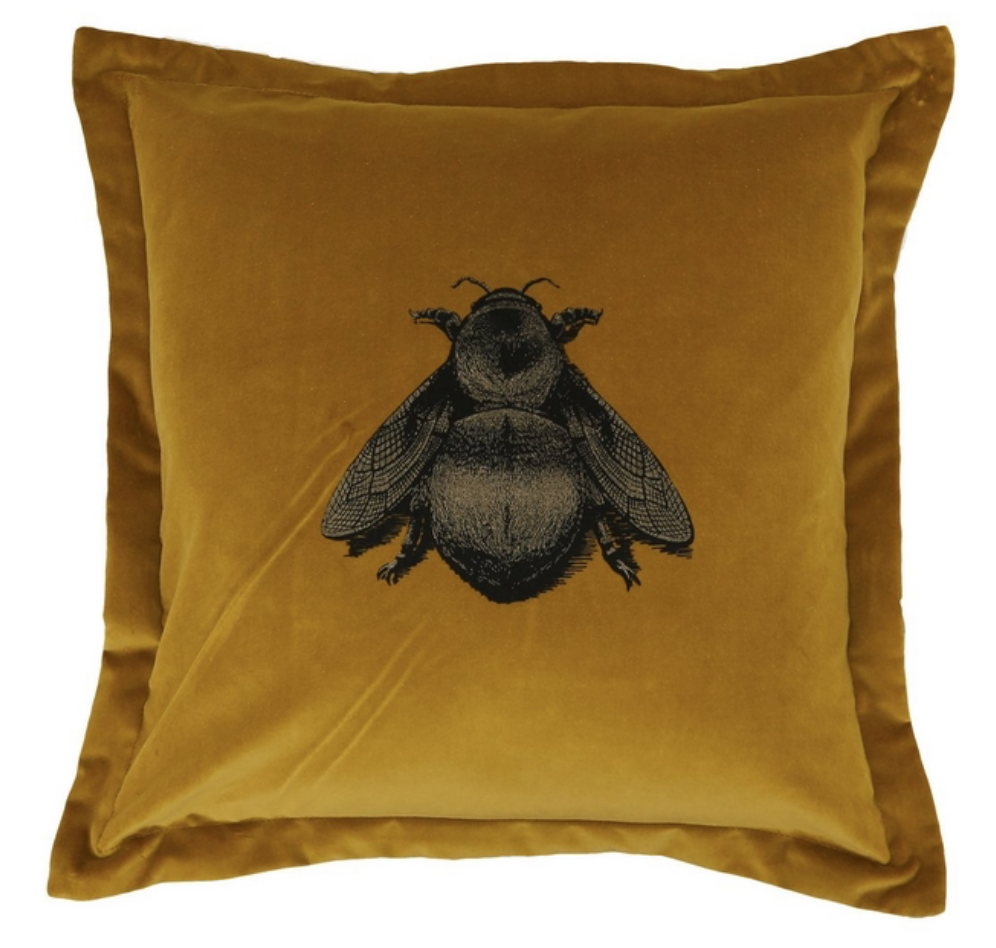 Bee cushions were what started my whole bee-finding internet session off in the first place – in particular, it was the bee cushion from amazing textiles and print company Timorous Beasties. This style comes in a few different colourways, but I love the richness of the gold and am very tempted to buy it for myself as an early birthday present. It’s £125 at Liberty here* – but a whopping 60cm x 60cm, so quite the statement piece. 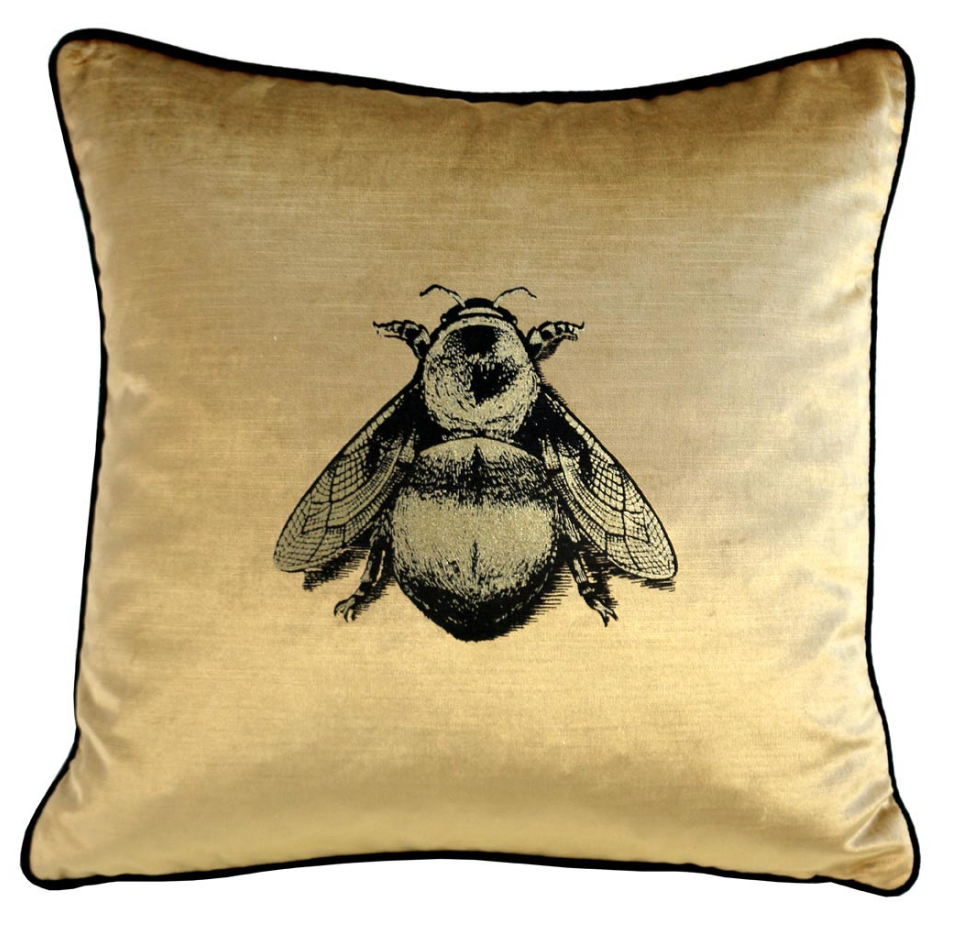 They also do a smaller cushion and I have to say that the golden one is very tempting too – velvet-backed, 40cm x 40cm and the perfect sort of sheeny shiny thing to jazz up the sofa. If you don’t have a dog that humps things. Or kids. Or a cat that scratches things. OK then. 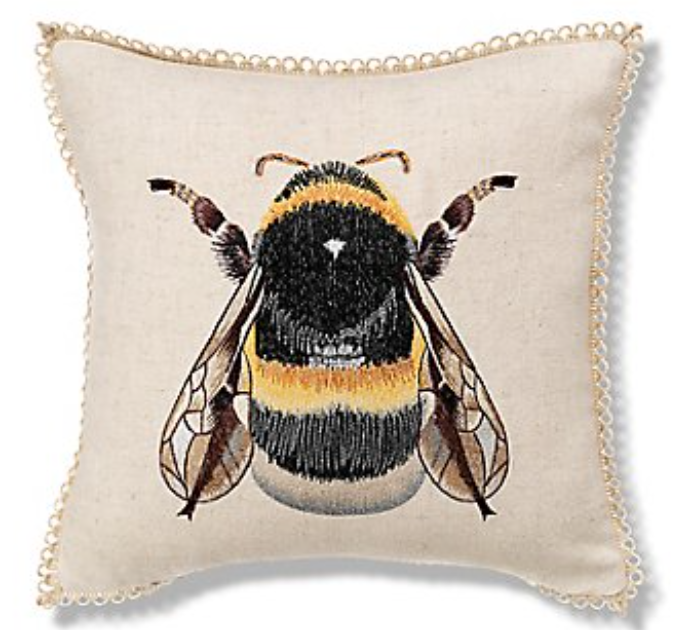 But wait! What’s this? An embroidered bee on a bijou pillow, punchily graphic and a mere £12 from good old M&S here*. It by no means has the same luxurious vibe as the Beasties cushion but if you’re after a quick bee fix then at just over a tenner it’ll take the sting out of your purchase.. (Hohoho.) 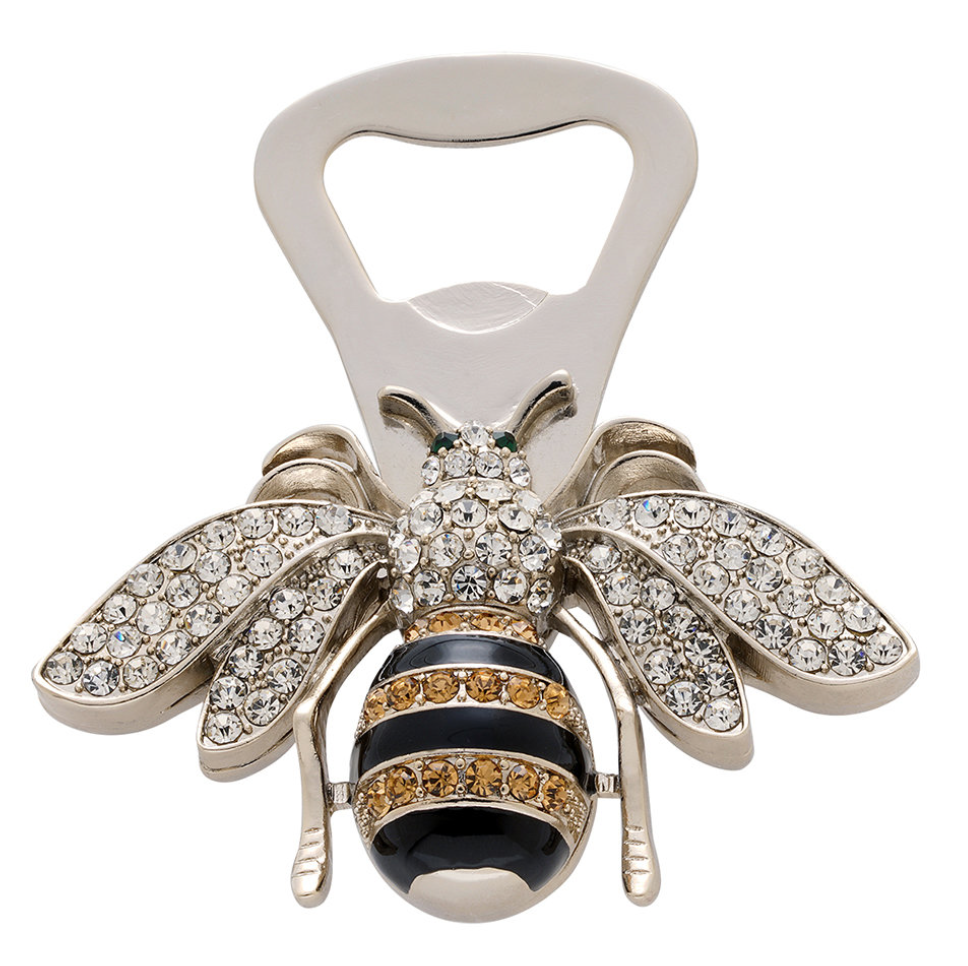 Let’s get onto some more substantial bee offerings – things that can’t be humped, scratched or cut with scissors. I tell you what, I wouldn’t be displeased to find this bottle opener sitting in my kitchen drawer. It’s more like a precious piece of pirate treasure than a fully-functioning tool! You can find it here* at Amara. 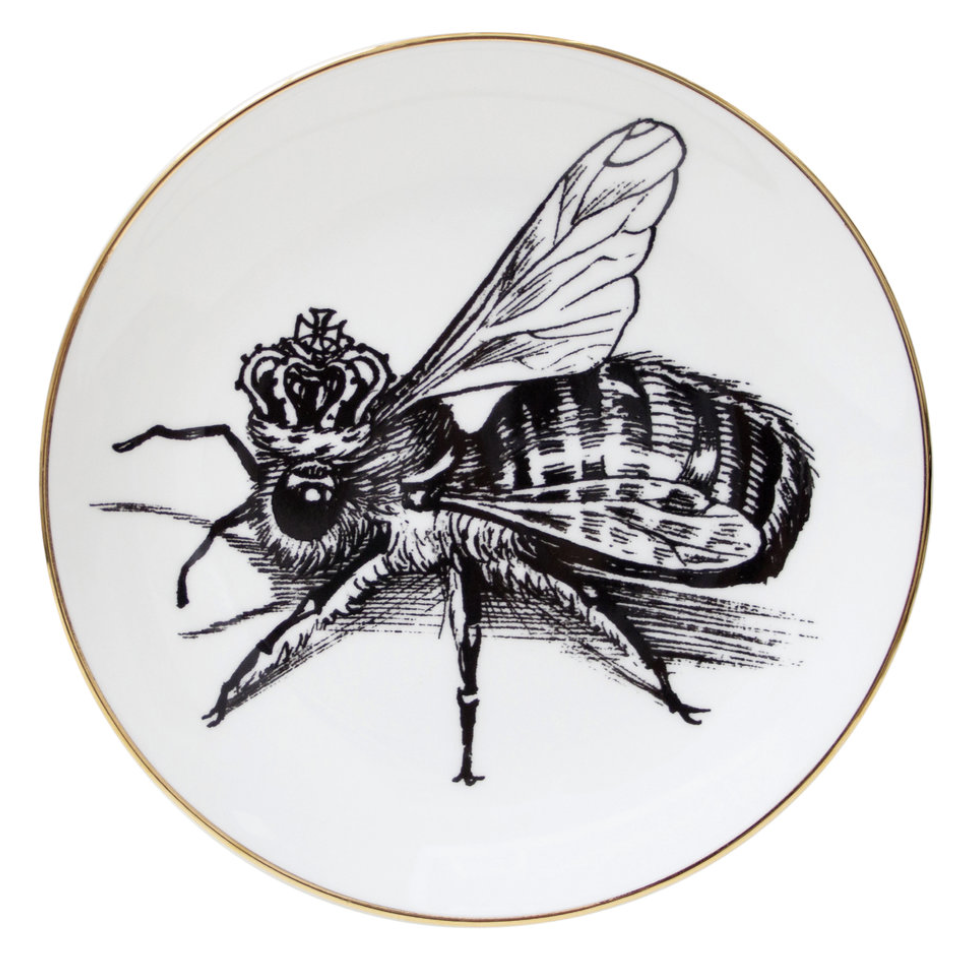 I’ve always rather liked the Rory Dobner “Queen Bee” series, but then I like almost all of his drawings. I have his cat cushion and it’s one of the best things I’ve ever bought – it makes anything I rest it on or prop it against looks wonderful. The bee plate* would look great in my line-up of fancy plates I’m envisaging on the dresser in the kitchen, but I’ve been stalling with my plate collecting because I’m worried I’ll become someone who collects plates. And then it’ll be teapots, and then novelty mugs. And then I’ll be on one of those TV shows where they have to tunnel into the house through twelve feet walls of hoarded magazines to interview the resident. 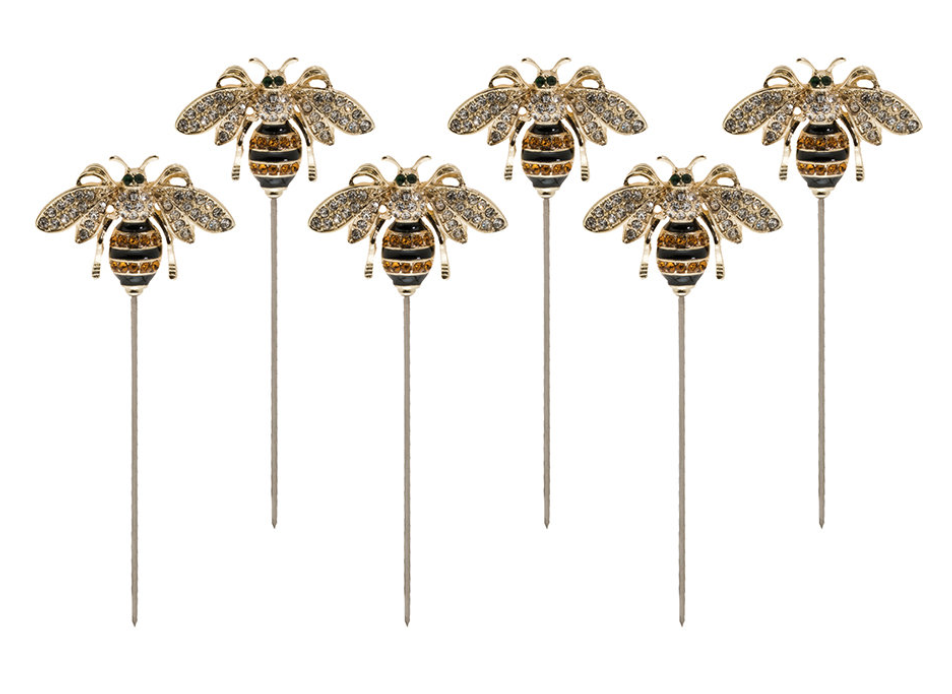 Amara have loads of bee things, actually. It’s like a Bee Mall. A Bee Mart. Massive storage trunks printed with bees, bee cocktail sticks, bee napkins, bee wellies, even a bee candle snuffer. You can find all of the bees by clicking here* or typing “bee” into their search box. 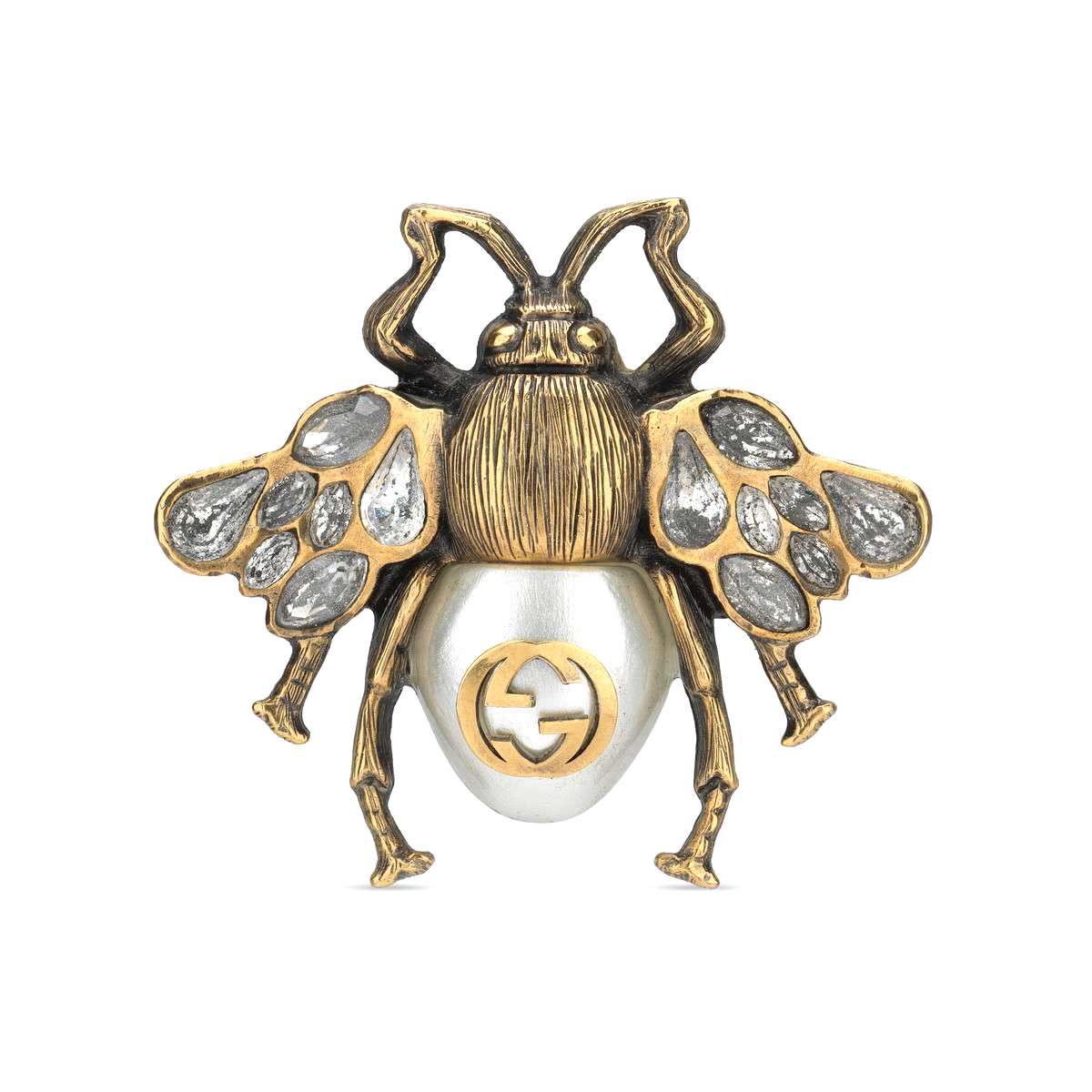 For those who want to wear their bees, look no further than Gucci. (I say look no further than Gucci but please do look further than Gucci because it’s bloody expensive and I’ve found some much cheaper options below. It was the lazy, throwaway sort of sentence that makes me feel shame but not enough shame to think of something better.) This chunky bee is big enough to hinder most essential hand movements and make playing the guitar/clarinet/flute virtually impossible. Find it – and a few variations – at Gucci here*. 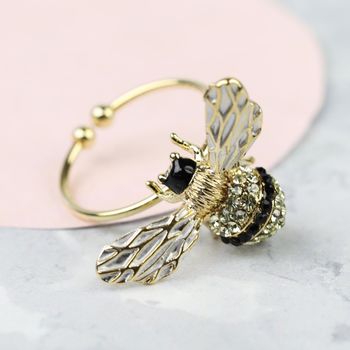 Here’s a finer, more delicate bee ring for those who want to retain hand function (the Gucci one is honestly very chunky!) – the attention to detail here is superb. Adjustable band, gold-plated and it’s a snip at £18 – find it online here*. 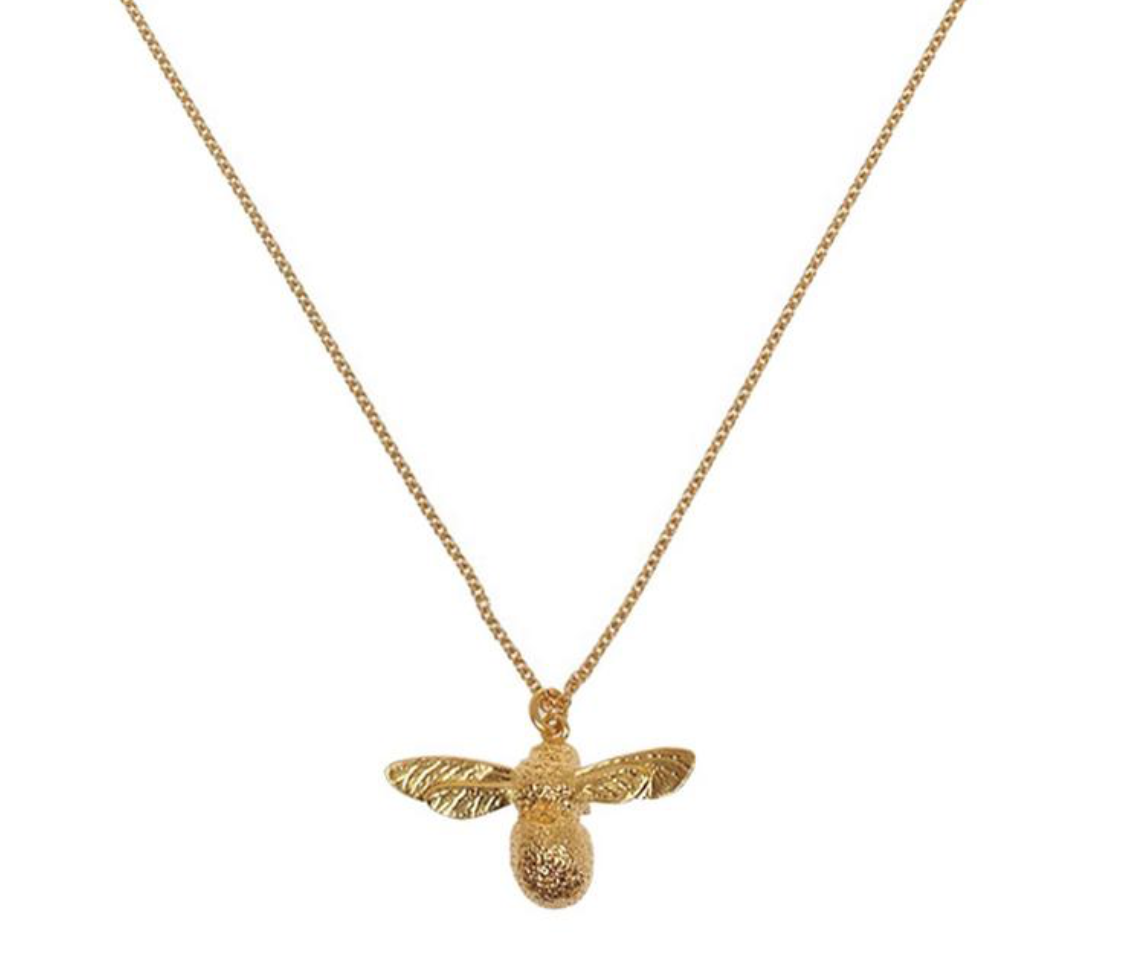 Oh and I have always been very fond of the Alex Monroe bee necklace (Liberty here*) which comes in yellow gold and rose. He also makes these gorgeous floral initial necklaces* which would make amazing Christmas presents if you’re trying to find something special for someone – er – special.

Right, back to bed for me, I’m hoping that tomorrow I’ll be fighting fit and right as rain. My to-do list has reached epic lengths and all the time I’ve been resting my brain has been thinking of new things that I should be starting.

I swear my brain has its own separate energy source – like a generator that kicks in during a power cut, but selfishly only serves one part of the building. My brain is a bit like a granny annexe – joined to my body but only by a small corridor. It shares central heating with the main house and allows the main house to pay the council tax and water bills and also the mortgage, but when the shit hits the fan it locks that internal door quicker than you can say “each for their own”. Gets its own Tesco delivery, has a secret little mini-fridge that’s just big enough to store a pint of milk and some tiny bottles of champagne. The granny annexe brain is having a fully-lit, fully-heated dinner party when the body of the house is totally in the dark, shivering and weeping under two duvets and a Calpol-stained dressing gown.