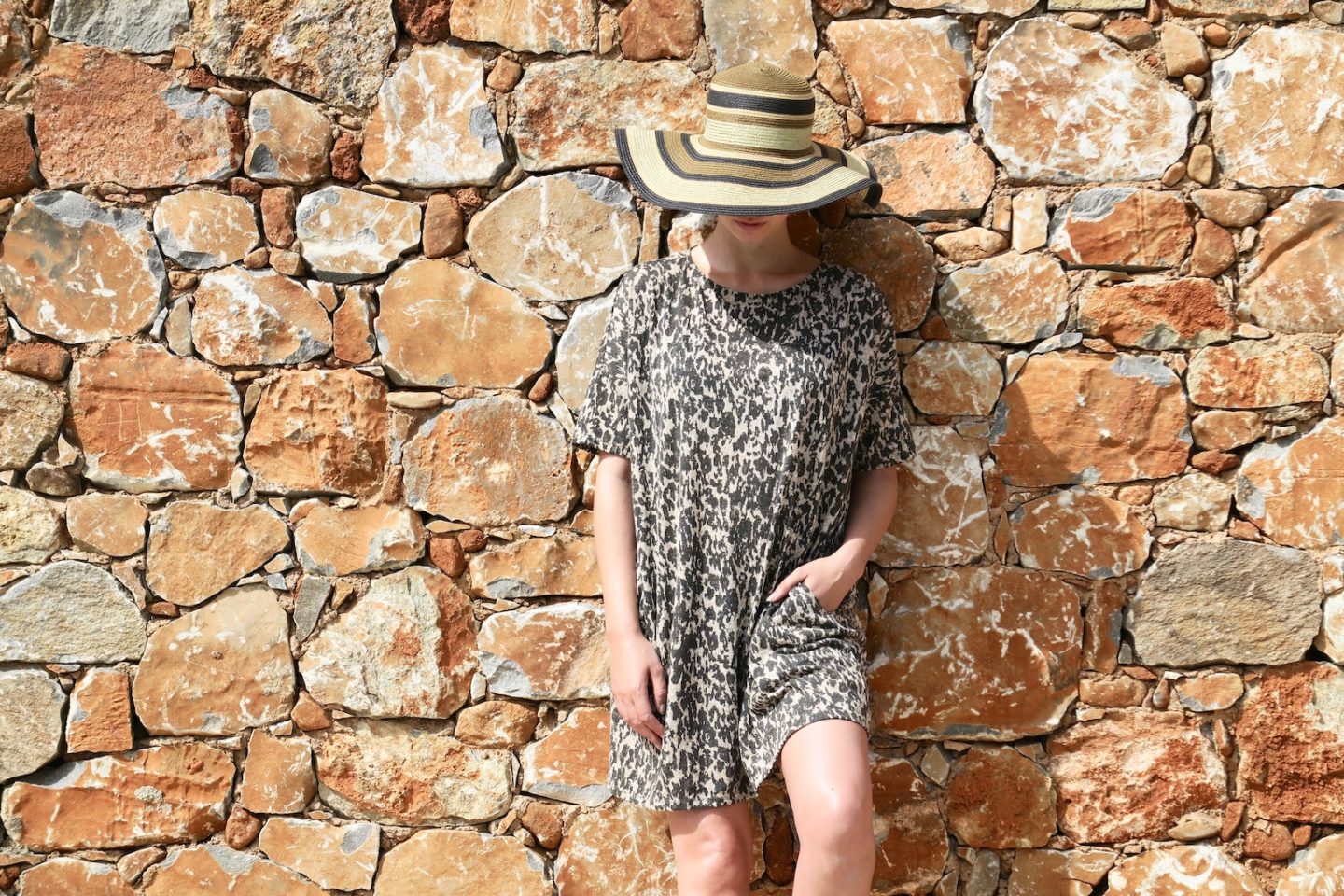 I was looking through my photo library trying to find a picture of myself holding an avocado (don’t ask) when I noticed that I’ve been wearing the same Hush dress* for about a month. It’s the easiest, comfiest summer dress of the year so far – basically an oversized t-shirt with pockets – and I’ve worn it with sandals, flip-flops, trainers, walking boots, bare feet and cowboy boots. Sign of a good dress, that is.

Although, it is quite short. If you get it then don’t bend over. Good God, it’s only when you catch yourself bending over in the mirror (whilst doing up a child’s sandals, for example) that you realise quite how horrendous a view the bending-over-view really is. And I mean for pretty much anyone, not just for me. It’s just a very bad, bad angle unless you’re in private. Even then, bloody hell. 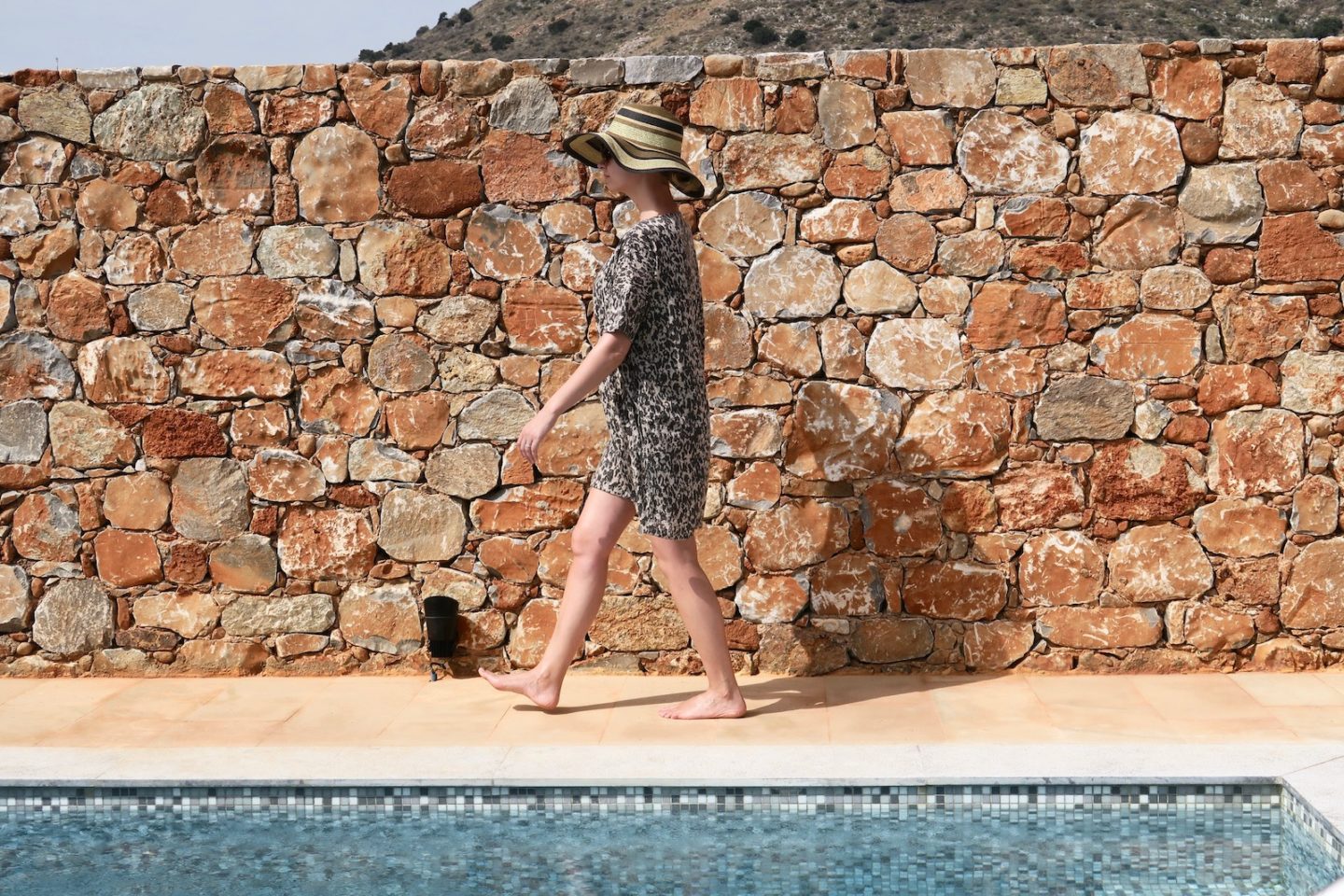 In my imagination, that view of myself looks like something from the Helmut Newton Sumo book (get it here*, if you don’t own it – it’s possibly the best coffee table book of all time); smooth, sunkissed thighs topped with frippy bits of black lace, the toned curve of the buttocks just visible beneath the hem of the accidentally-on-purpose hoiked-up dress. In reality, it’s like a relief map of the surface of Mars, twice, topped with M&S cotton pants in a washed-out beige colour. Grim.

But this dress doesn’t blow upwards in the wind, which is great news! I was in a flippy dress in London the other day, late for a meeting, trying to hail a cab, and my entire dress blew up around my waist. That hasn’t happened in years – I think my heart temporarily stopped. And I suddenly remembered how I used to tie a cardigan around my waist, if I was wearing a dress prone to flying up, for exactly that reason – anchoring down the skirt part. And I spent many hours going to and from castings, with my dress flying up every three seconds so that I looked like some sort of clown act, trying to think of ways of solving the problem. Weights in the hems, perhaps? Removable struts that could be magnetically fixed to special skirt-anchoring garters just above the knees? Wearing jeans? Ah yes, that’s why I moved over to the Dark Denim side… 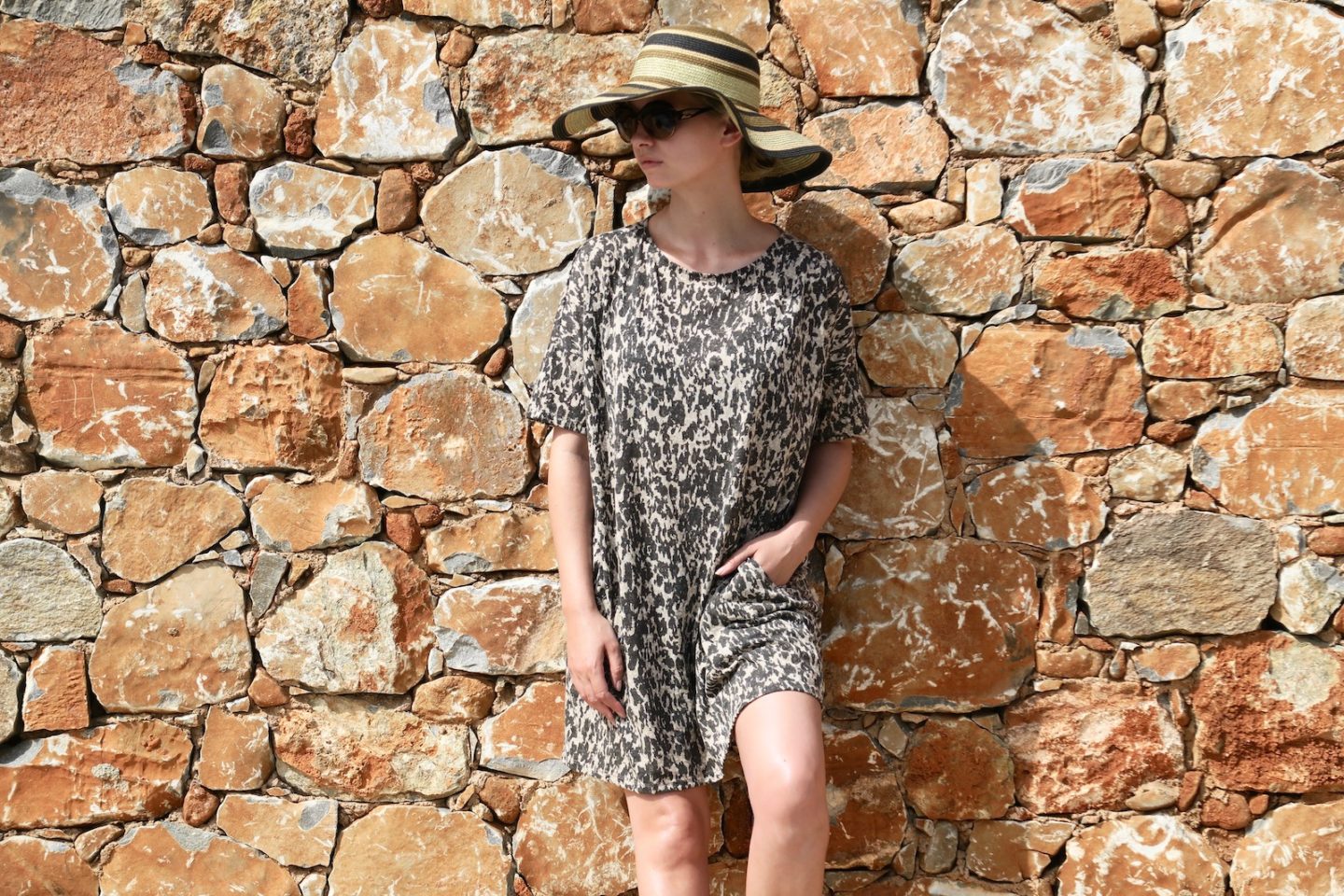 So it’s quite a short dress, but it doesn’t blow up in a breeze, which so far makes it sort of neutral in terms of pros and cons, but I must say that if your legs are in good nick (smoothish, bit sunkissed, etc) then it’s excellent because that’s pretty much all of your body that gets revealed. The rest is obscured within the squarish realms of the t-shirt dress, meaning you can virtually throw a party in there without anyone knowing. Hurrah.

Here we go, then – some random snapshots with only one thing in common: the dress. You can find the Washed Printed Ivy Dress at Hush here* – it’s £55 and comes up true to size. I wear a small.

Let’s kick off with me wearing the dress crossing a bridge, shall we? Always a winner. Dresses and bridges, bridges and dresses. Regard: 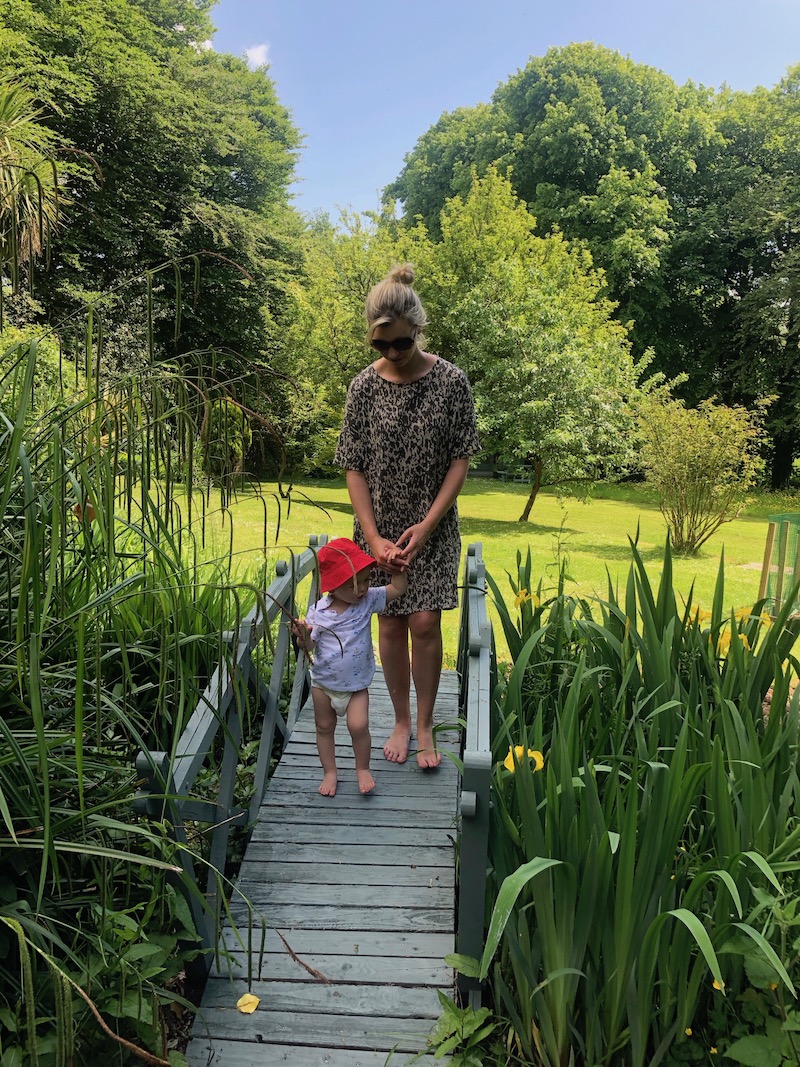 I love bridge-crossing. And here I am posing in front of a piece of modern art at Hasuer & Wirth Somerset: 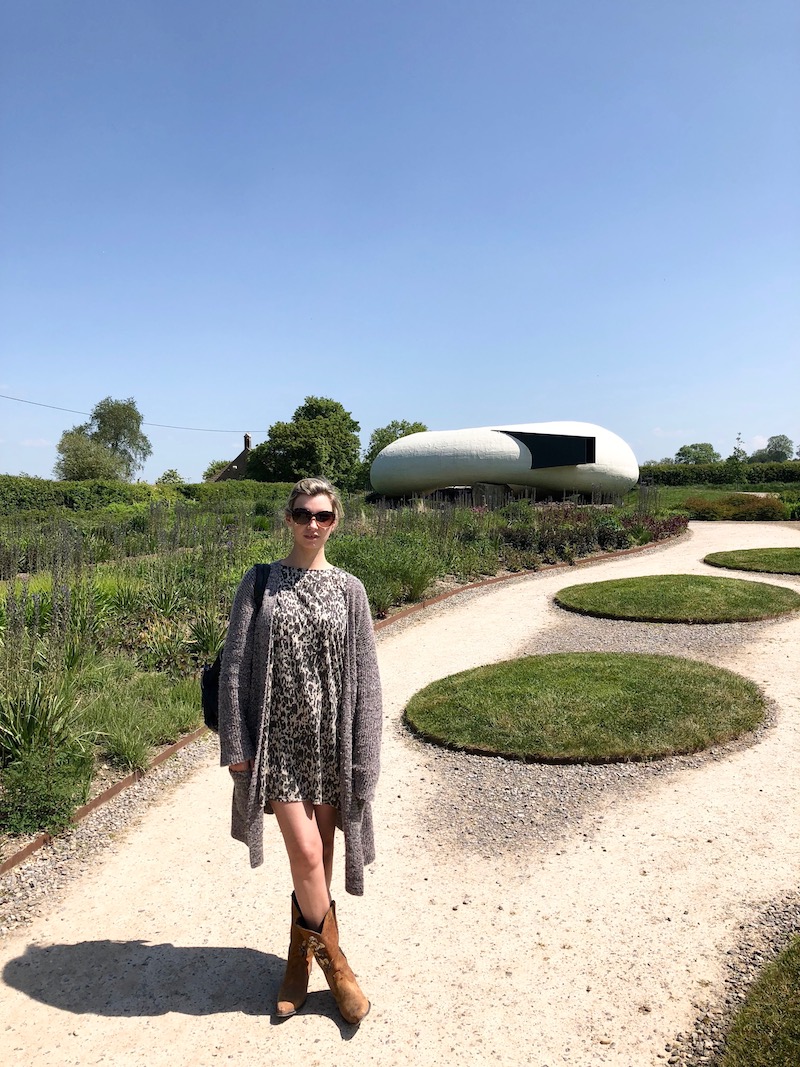 Note the cowboy boots! They’re old ones from Durango and I love them. Next, see how I wear the dress whilst pretending to read a book: 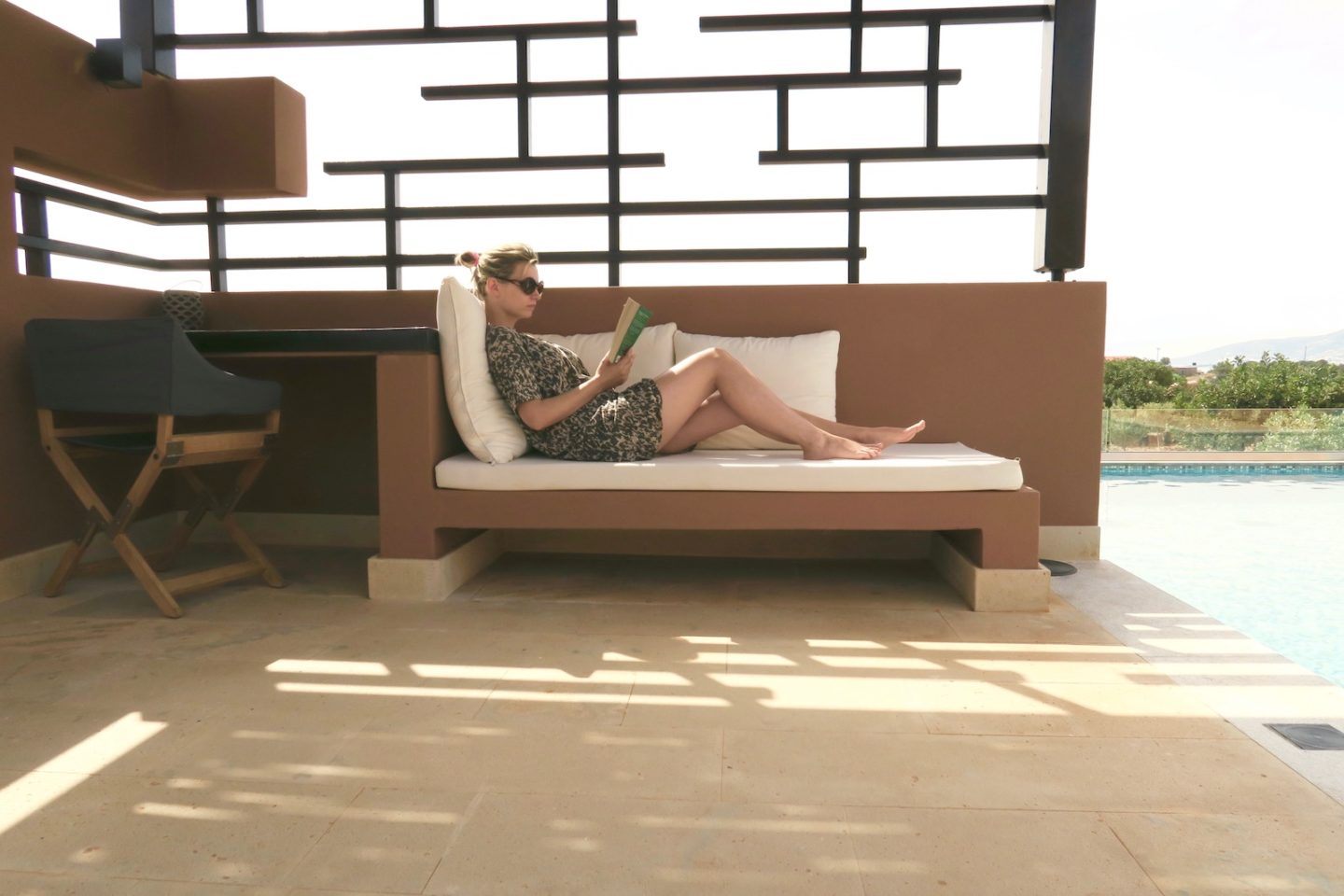 Expertly posed, I think you’ll agree. And here I am trying to herd my little flock of lambs to dinner at Domes of Elounda in Greece, face obscured by giant hat, trusty old Topshop sandals on feet… 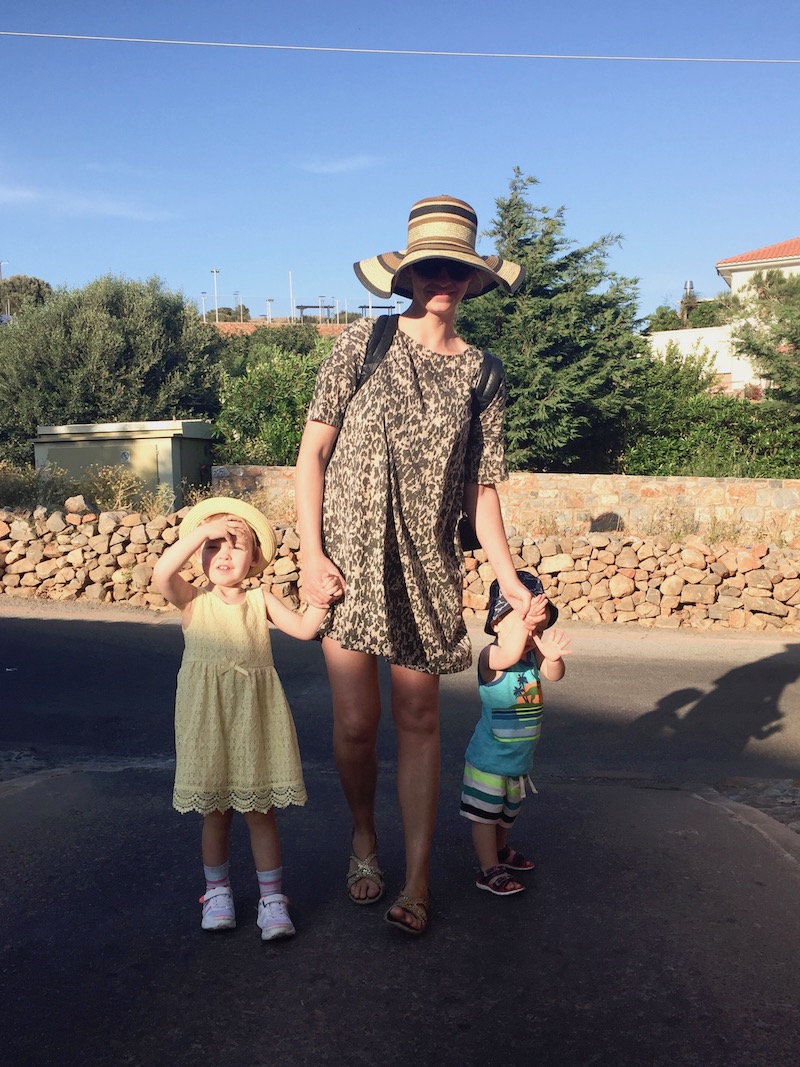 …and then dragging the flock around a former leper colony, which they really enjoyed. 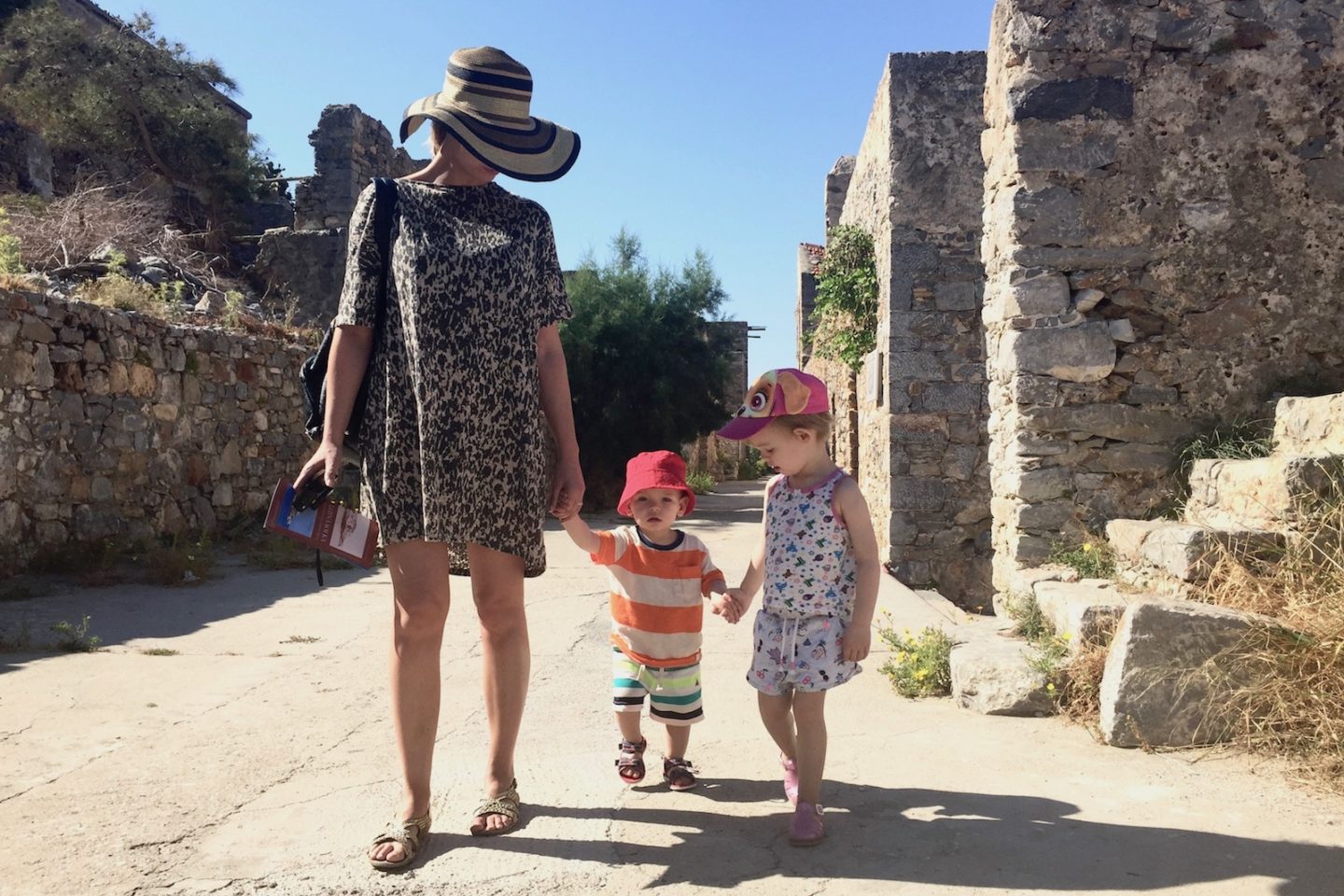 Honestly, it’s these experiences and memories that they’ll really treasure. “Where was this lovely photo taken Mummy?” “Oh, on an island that used to be a leper colony, darling.”

Now this one I’m proud of: ACTION MUM. 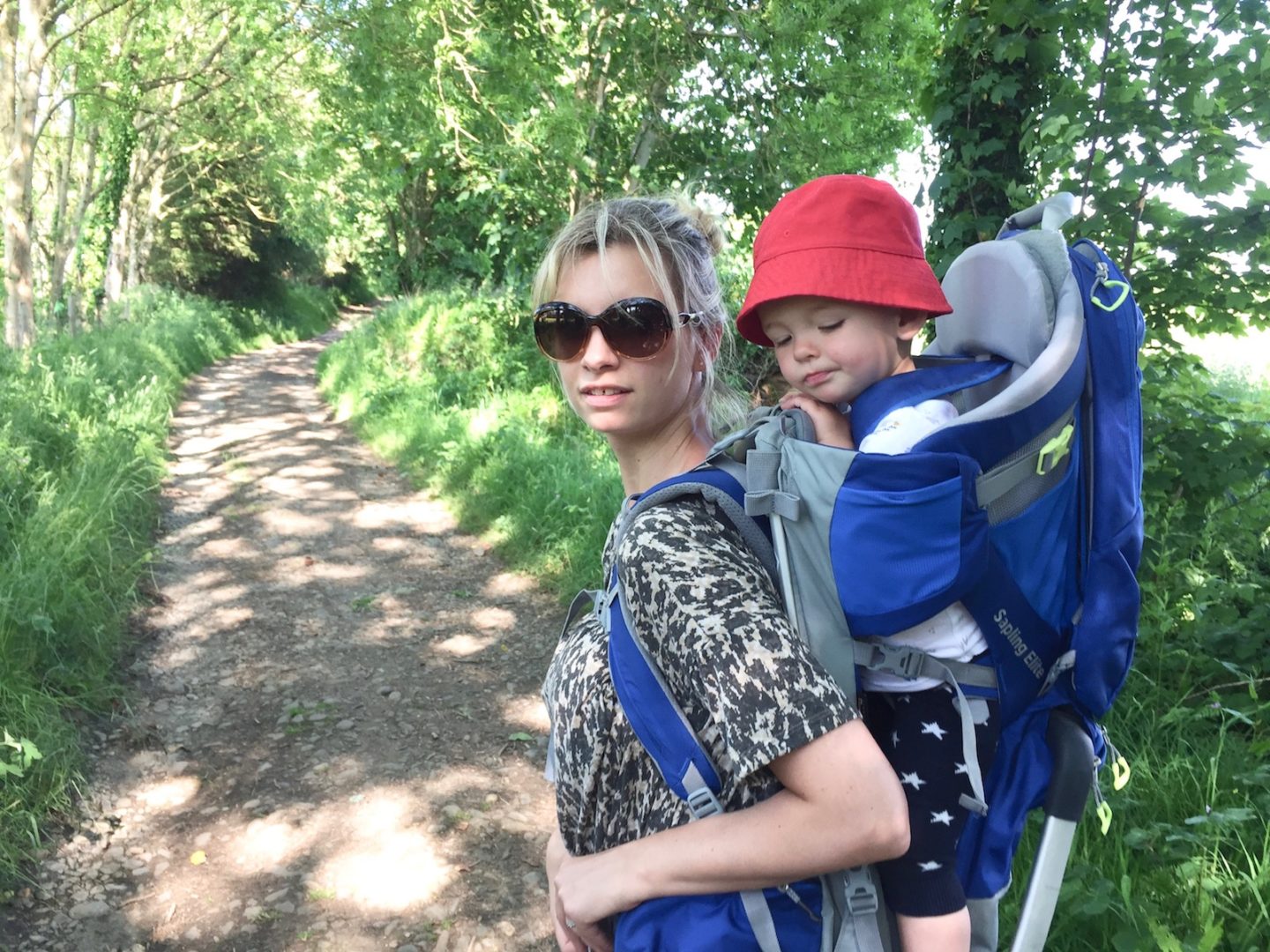 I’d like to make it clear that I have never worn this backpack baby carrier thing before and I never will again, because carrying Ted was like carrying a load of bricks, except that they were bricks that wriggled from side to side. Everything hurt on my body the next day and I only even tried the backpack carrier thing on because Mr AMR said that it was harder work carrying Ted in the backpack all day than carrying Angelica up a hill for ten minutes on one hip.

Mr AMR wants to make it known, however, that this backpack is exemplary – it’s the Thule Sapling Elite and has seen us through two babies and countless overgrown fields, shallow rivers and muddy quagmires. Basically all of the terrains that are completely inadvisable when you have small children, but hey ho. Embrace the countryside, etc. I was very kindly sent the Thule a few years ago, so thank you Thule, wherever you are – Mr AMR is a total convert and has, by the way, enabled many Thule purchases amongst our friends. You can find more details on the Thule carrier on their website here. I need to do a full review – it’s on the list, but really I have to badger Mr AMR to write it as he’s the one who has all the experience…

Lastly, a distance shot. Here I am posing in front of a house – not mine, but a new holiday home that I was invited to review by Beach Retreats. 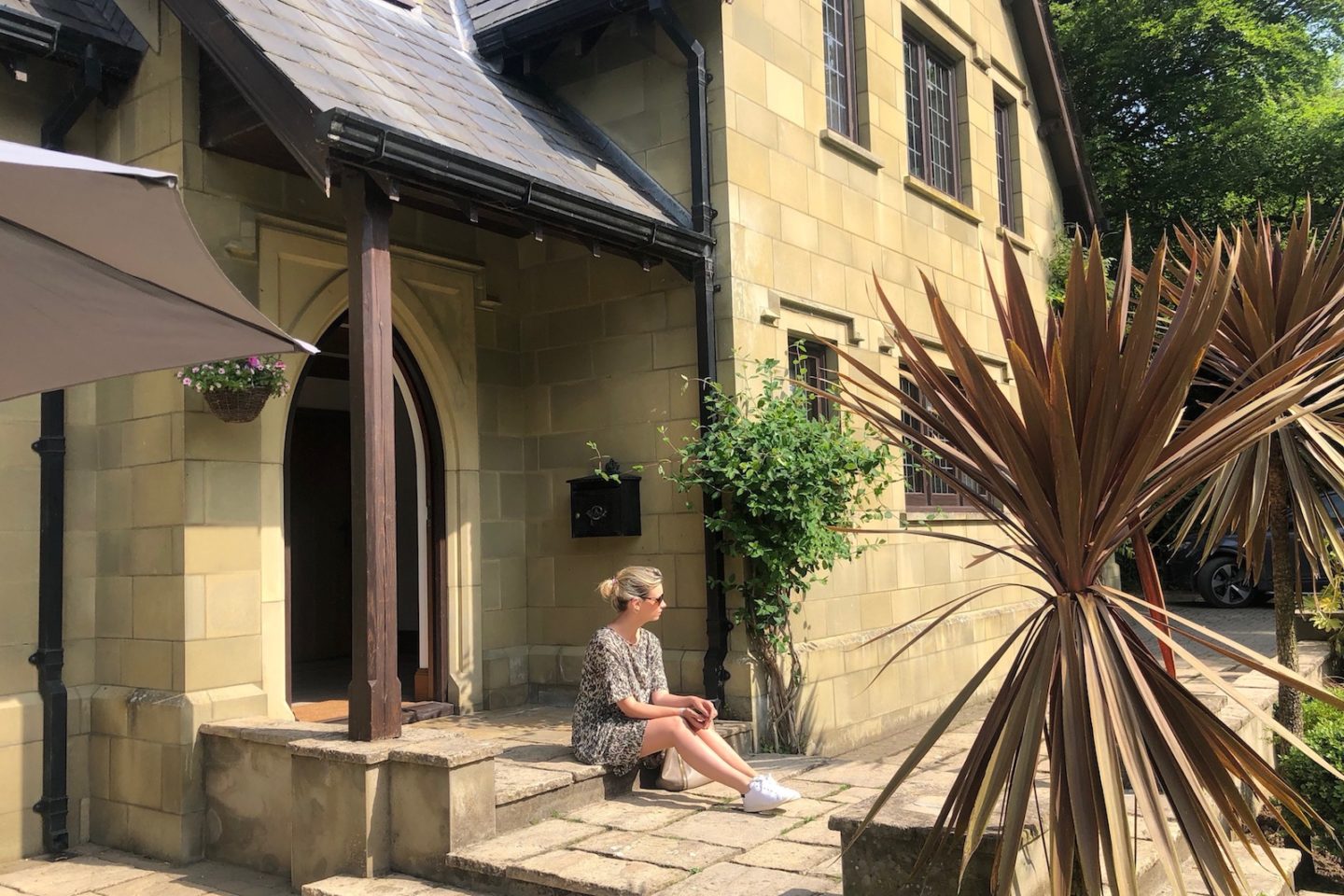 There’s a post coming soon, I promise. I’ve just got back – it was so peaceful there and I slept like a log. Which was handy, because I was knackered after carrying the baby up the road and back. It’s the most exercise I’ve done in about four years!