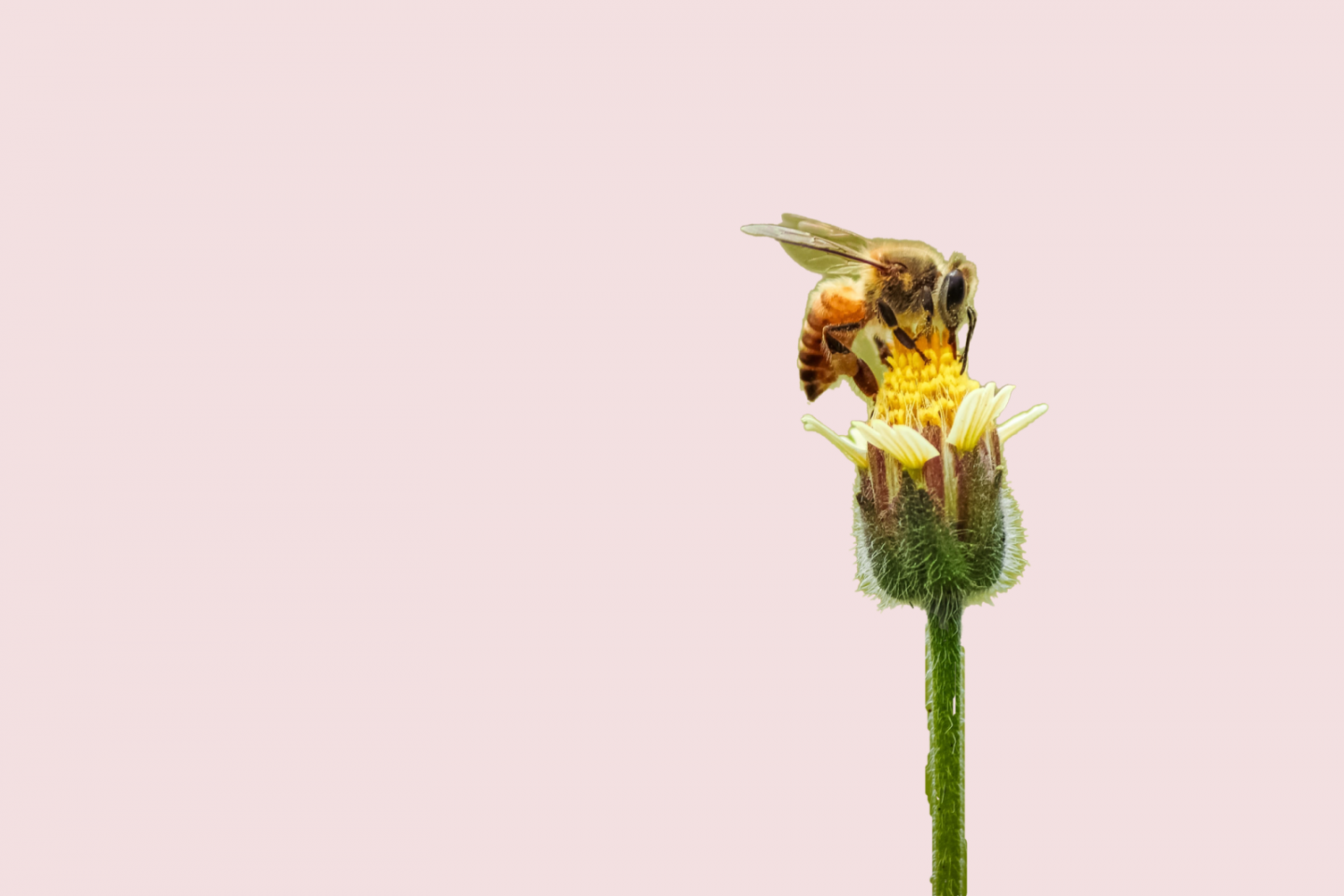 Did you know that bees in a hive have this thing called swarm mentality, or hive mind, which is this amazing sort of collective thought that happens when you get lots of social insects (ants, bees) together in a colony? I’m no Attenborough, but I’ve been Googling this for all of about, ooh, four minutes, and it’s so interesting; the behaviour of the insects in the colony is so coordinated and the mental activity is so collective that it’s comparable to a single mind controlling their behaviour.

It’s kind of creepy when you think about it for too long, especially if you’re apiphobic. I don’t have a problem with bees, thanks to having been mentally conditioned from a young age to see wasps as the enemy and bees as the insect equivalent of Dumbledore from Harry Potter. (Necessary for survival, essentially good and kind, very unlikely to sting you without extreme provocation. Wasps would be Voldemort.) It was perfectly acceptable to swipe at a wasp with a rolled-up newspaper; a fallen bee presented something of a small national emergency. The invalid bee had to be scooped up with an empty yoghurt carton and placed on a silken pillow and provided with a tiny pool of sugar water to sup from.

Still, many bees together: creepy. (If you want to read an excellent and highly imaginative novel that’s quirkily written from a bee’s-eye-view then I highly recommend The Bees by Laline Paull*.) And the idea that their common need and purpose creates a sort of mega-mind gives me the tingles. But I suppose it would all completely fall apart, wouldn’t it, if they didn’t have the single goal or intention? Imagine if bees were just up to their own bits and pieces all day, like we humans are. Pottering. Living in millions of tiny mini-hives rather than one big one – spending Sundays fixing a leak in the roof of their condo-hive or painstakingly harvesting the honey from their comb and pouring it into tiny little glass jars ready to send to the local hipster market. It would be chaos! The world would come to an end!

‘Where have you been, Brian?’

Brian comes sauntering in from a day out in the rose bush, his face covered in pollen.

‘Well we’ve all been toiling in the hive, Brian, whilst you’ve been faceplanting the good stuff all day. Look at the state of you! It’s on your back, your thighs, you’ve even got pollen on your eyelids.’

Brian isn’t remotely regretful because he has no swarm mentality. What Geoff doesn’t know is that he also banged the Queen Bee three times that morning and he’s not even the correct ranking of bee to approach her, let alone climb into her bed! That’s just the way he rolls; he’s a renegade bee with his own way of thinking, his own unique –

‘Go and get cleaned up Brian, for God’s sake. You’re an absolute disgrace.’

And ants! Imagine if ants didn’t have swarm mentality. It’d be a total shit show. There they go, carrying their brown leaf in a perfectly straight line, three of them on each side like little fast-legged pallbearers. There’s no “to me, to you – to me, to you!” in the ant world. They know exactly what they’re about – perfectly attuned to one another. But if you had even just the one ant anomaly; blimey. Carnage.

‘Erm, guys?’ says the free-thinking ant wearing the orange trousers and a snazzy cravat. ‘Which floor are we taking this crumb of bagel to? Do you want to go the short way through the slurry pile or circumnavigate the mess and head on through the air brick?’

The others in the ant removals crew wouldn’t even answer him, because they all communicate telepathically, probably; I imagine they’d just put down the bagel crumb, advance menacingly towards him and then trample him to death. Before stopping for a cup of tea.

Seriously, though; what would all of these insects do if they had total free will and didn’t have to work for the good of the swarm and for the purpose of survival? Would insects get any enjoyment from just meandering about? Would a bee see a pollen-filled flower in the same way we see a hotel suite? Comfy bed, room service, bit of a change of scene? If bees were just working for themselves – freelance bees – would they work as consistently or as hard as the ones enslaved by the hive mind? Or would they, like me, spend a morning polishing all the cutlery from the cutlery drawer with an old t-shirt and then cram all of the actual work into the afternoon?

If I was a freelance bee, an escapee from the swarm brain, then my day would look like this (remember this is only in the summer months, because in the winter I’m dead):

5am: sun comes up. Poke head out of detached mini-hive (didn’t want neighbours) and decide it’s too early to go out. The air is a bit fresh and the dew still sits on the grass and the petals. If there’s one thing I hate then it’s getting damp. My fur takes an age to dry out and if I leave it damp for longer than a few hours, I smell like wet dog.

6.30am: do another dew check. Still dew present. Other bees are beginning to take off on their commute to the hive-rise office: I am still grooming my leg hairs.

8am: dew point acceptable. But wait! What is this floating through my doorway? White and powdery…pollen. In the air. What an unexpected bonus. This is what happens when you cannily set up house next to a protected wildflower meadow. The plot was pricey but I am reaping the benefits now, let me tell you.

9am: hive-rise secretary rings to see when, or if, I might actually turn up for work. I do not like his tone. Mainly because am high as a kite and struggling to make out all of the words. Call in sick for the morning and roll about in the remaining pollen for a few minutes to take the sting out of the experience.

10am: bored. Can’t go outside in case another worker sees me and reports back to the collective hive mind. Disguises don’t tend to work well for bees so is a last resort option. Peer jealously at my colleagues who are working the lavender, bobbing up and down and having a right old time of it. They are getting heavier and heavier with the pollen – one of them is so loaded he keeps flying into the wall.

10.30am: attempt to tune into the hive mind. Can still pick up signals now and then if I sit really still and concentrate on my antenna but today is mostly static. Omega Patrol have been called to the rose garden and there’s a wasp incident in sector nine (fig tree, always an absolute battlefield) but apart from that, nothing via the airwaves. Nap.

11am: do some crunches to try and tone up ever-expanding gut pouch then some lunges to strengthen legs. Clean out my pollen-collecting baskets with a damp cloth, even though they are really hard to reach because they’re on the backs of my legs. What idiot decided that was a good idea?

11.45am: don disguise (large furry coat that takes me from worker bee to bumblebee in a matter of seconds!) and clumsily fall out of own doorway. Fly as quietly as possible down to the foxgloves and insert myself into  best-looking flower. I say insert, it’s like trying to stuff a cat into the end of a trumpet; the bumblebee disguise is both heavy and cumbersome. FML.

11.49am: am heating up unbearably in bumble disguise. Sweat everywhere, including top lip. Can smell the nectar, feel the nectar, but can’t move to lick the nectar as am restricted by aforementioned coat.

11.53am: fear for own life. I have heard of honeybees doing a mass pile-up on wasps and then their generated heat kills the wasp: now I see how this is possible. Cannot sustain this level of discomfort. Must. Leave. Flower.

11.56am: have been spotted by Pieter in management. Am red-faced. Not least because my core temperature is equal to the sun. ‘Why are you wearing a fur coat in summer?’ Pieter said as I fell out of the flower and I wanted to punch him in the honey gut. Told him I had a summer cold and had called in sick. ‘But you’re feeling better now, aren’t you?’ said Pieter. Rhetorical question.

Next week: the life of ants.

(Photo by Delia Giandeini on Unsplash)