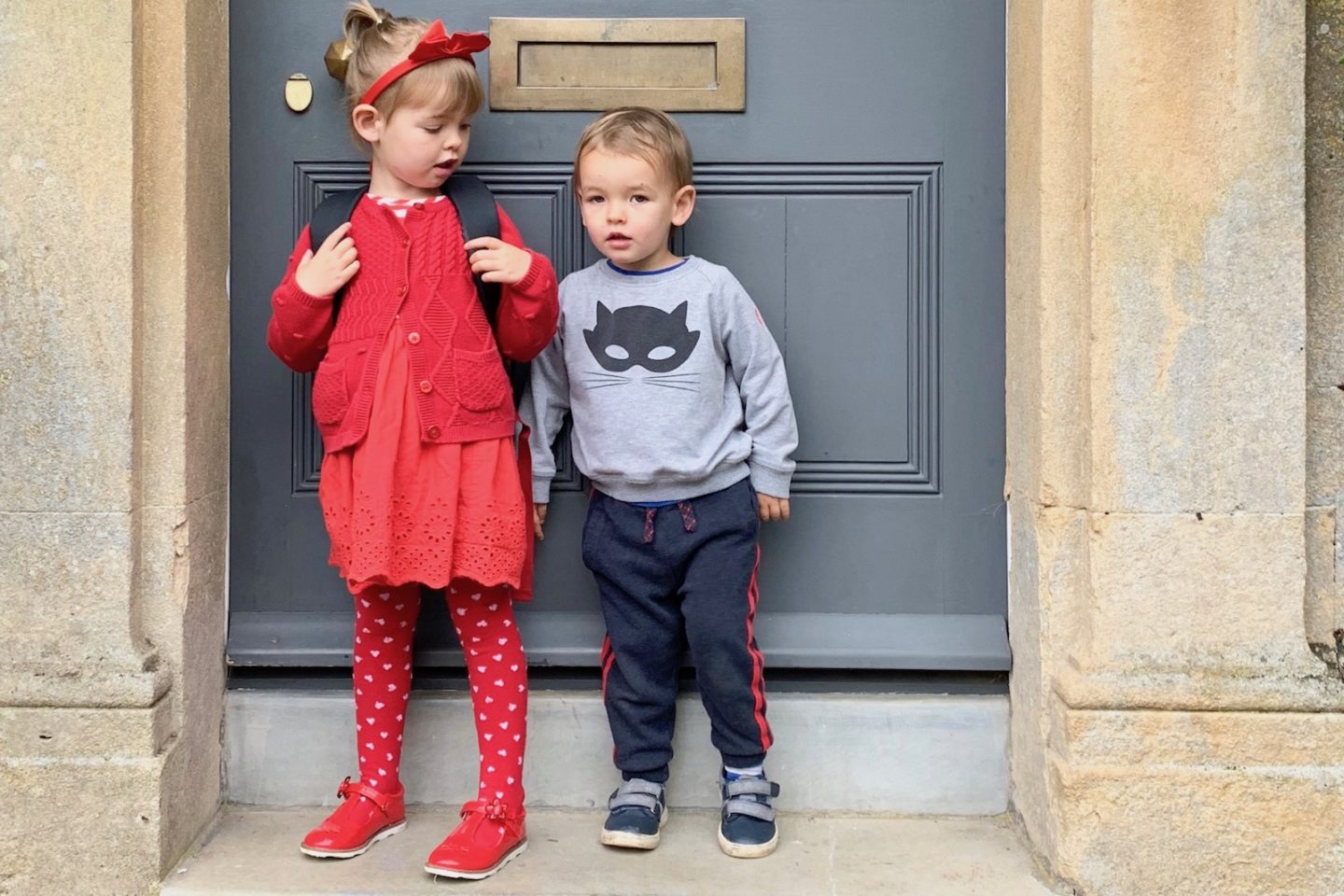 A fleeting break from tradition with this life update because I’m going to be talking mostly about me. My favourite subject. (Joke: I hate talking about myself unless I’ve had too much wine. In fact, I tend to stop people in their tracks when they try to ask me what I do for a living – I usually tell them that I work with computers and they are too bored to ask more!)

I’m talking mostly about me because I feel as though I’m at a weird old juncture in my life, one that has me wondering who the hell I am and what an earth I’m going to do next. I think that shopping for Angelica’s school uniform triggered it all off, this sense of being a bit lost and wondering about what the future holds, but in fact it’s a strange feeling that’s been bubbling away beneath the surface ever since we made the big move to Somerset.

I think it stems from being the sort of person that always has to be doing something, planning the Next Big Thing, working on a project, being so busy that I live in a state of perpetual low-key chaos and stress. Having two babies quite close together (18 months apart, not planned that way!) has been the most intense time imaginable, especially with work being the most busy it has ever been, and I think I worry that when school starts in September, and Ted starts a few mornings at nursery, I won’t quite know what to do with the extra time. 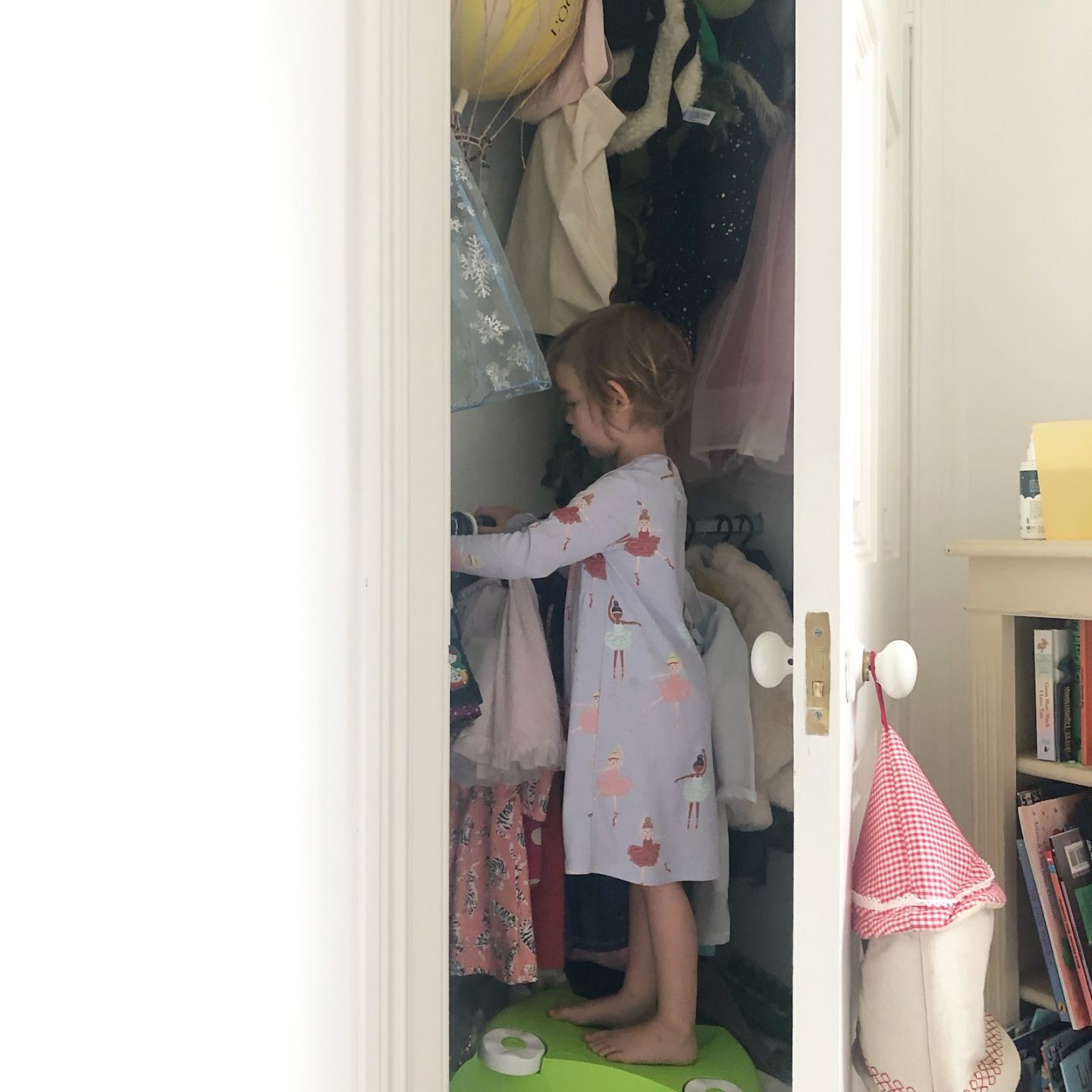 Actually that’s a lie; if I was entirely honest, my problem with September and the new starts is that I am forced to evaluate the era that is just about to come to a close. The baby era. I find myself tentatively asking myself how did I do? Could I have done better? In those rare moments of quiet, when I just sit and mull things over, I wonder whether I worked too much or should have worked more, whether I should have pulled in more help to save my sanity or turned down more jobs in order to be a completely full time Mum. I tick off the things I didn’t do: I haven’t taken them swimming once. I didn’t make gingerbread with them and get it all over the floor. I didn’t get enough photos of me with babies perched on my hip, or me asleep in a tangled nest of sheets with a newborn spreadeagled on top of my chest. I ask myself whether I was ever really present, in the moment, because I really can’t remember much at all.

I could do a huge list of the things we have done, including almost daily trips to the zoo and adventure park, walks with the dog, holidays in the car to Cornwall and Devon and London and Dorset, crazy chases around the house every afternoon (it’s a great house for running and hiding), discos, picnics, dressing up, shop games, hotel games, vet games, hospital games, early wake-ups every morning, drawn-out bedtimes every night, middle-of-the-night cuddling sessions, countless dribbles of Calpol over the bedsheets, endless tense exchanges between the adults as to where the in-ear thermometer is and who had it last…

I’ve been away from home for less than 2.5 percent of the time I’ve been a Mum, but I still fret that I could have done better and that I would do it better if I did it all over again. Maybe that’s why some people have another baby (I’m not, don’t get excited!), because there’s always the feeling that next time you will finally get it right. 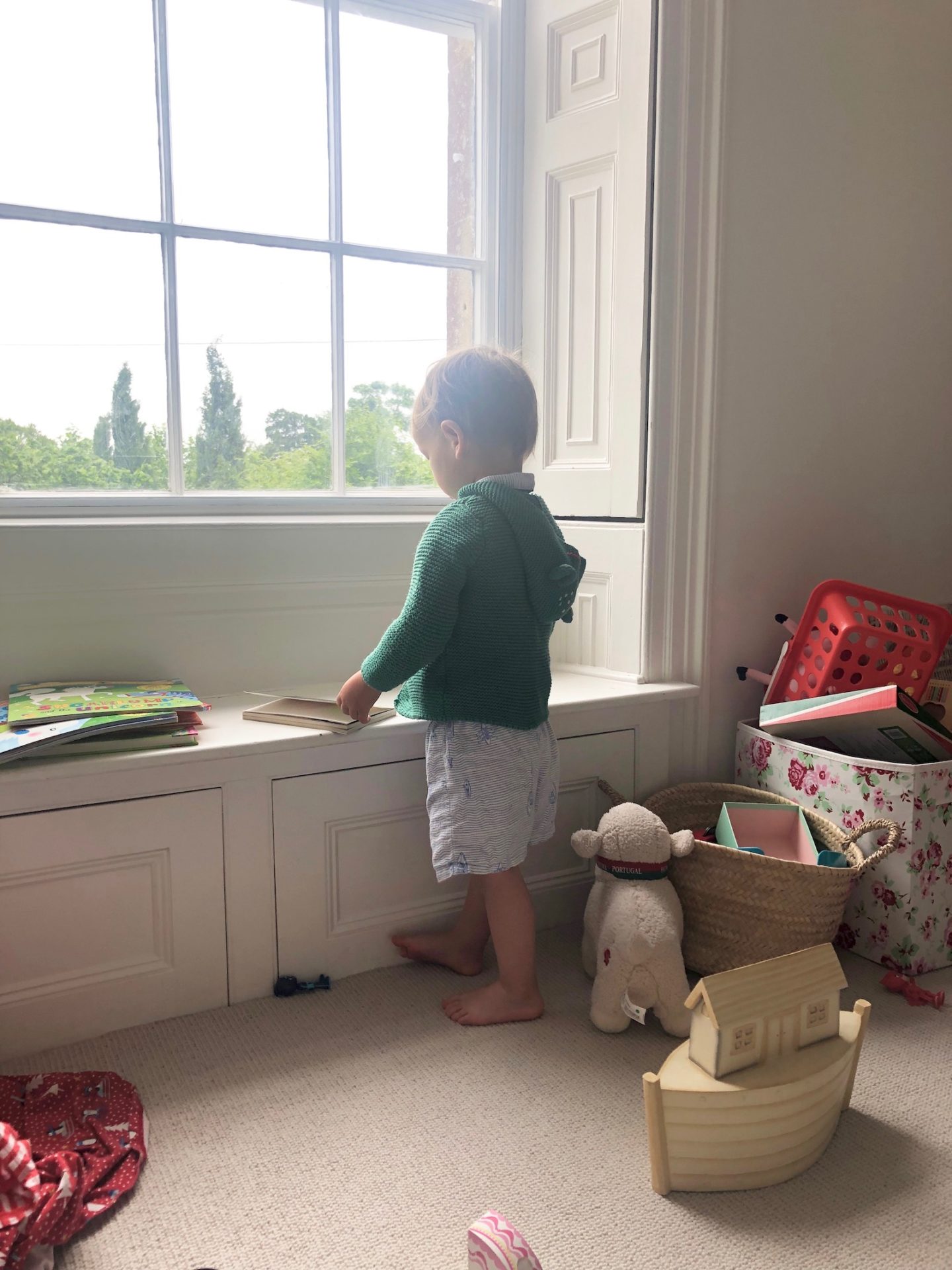 Well. That was borderline depressing wasn’t it? Sorry about that! I don’t actively regret any part of what I did during the baby stage, I’m just sad that it’s pretty much over. It’s like a klaxon has sounded to tell me my time is up.

“FNARRRRRRR! Put down the flour, mothers! You’re about to make homemade play-dough, or bake cookies for the first time, but it’s TOO BLOODY LATE! You want to take them for a walk instead of plonking them down in front of Peppa Pig so that you can print, sign and scan the mortgage documents in peace? TOO LATE! They’re old enough to just amuse themselves anyway! They don’t need you anymore and they wouldn’t go on a walk with you anyway unless you bribe them with sweets! FNARRRRRRR!”

Talking of bribery, Angelica has cottoned on to the whole you-scratch-my-back-I’ll-scratch-yours system remarkably well. Maybe she will grow up to be a negotiator. Or a politician. (God.) Either way, she knows the value of her cooperation, especially when Ted is kicking off about his apple not being cut in the correct manner (ie: not cut up at all, he likes them whole, but he carries the bloody thing about for an hour and the dog almost always ends up getting it off him so I usually try to make him eat it chopped up in a bowl and he hates it) and there are two things that she has firmly planted on her demands list: games on the iPhone and sweets from Daddy’s retro sweet shop box.

Mr AMR got a huge box of sweets for his birthday last month and they’re all retro chews and sherbet dips and so on from the seventies and eighties – Angelica is obsessed. It’s like another world, one where Pom Bears and organic dried apple rings don’t exist. The games on the iPhone thing has had to be curbed, for the moment, because she got really into playing on these Toca Boca apps that let you play at being a vet or a train driver or a doctor. They’re a bit like Sims but for toddlers and she gets really immersed, carrying supplies through the hospital and visiting the patients and feeding them their lunch. She started waking up early just so she could ask to play on my phone, so that has been nipped in the bud. The phone games started as a lazy thing because I could go back to sleep for half an hour and she just carried out her doctor rounds, probably doing things like administering morphine and delivering tricky babies and amputating gangrenous legs using a selection of power tools. But the games are no more. It’s too early. Both in the day and in life.

I say that officially, in case Mr AMR is reading, but unofficially I let her play at grooming the Toca Boca horses last night when I was trying to wrestle Ted into his back-to-front Gro Bag and stop him from throwing his mattress out of the cot.

Ted has become Hulk Ted Smash over the course of the last month. Not only does he thrash about in his sleep, knocking into the bars of the cot so that it sounds as though a minotaur is trying to ride through the wall of the house, he likes to dismantle his sleeping arrangements over and over again between the hours of 7 and 9pm. It used to be that he stripped himself, did a wee on the mattress and then called for help, but now he is trapped in his back-to-front sleeping bag (thanks for that tip, readers!) and can’t unzip it, so he amuses himself by taking off the sheets and folding the mattress in half (actually quite a phenomenally difficult thing to achieve) and then sticking both legs through the bottom slats. Before calling for help.

Whoo, bedtimes are still the most testing time of the day. I think (still) that it’s because you really feel as though you’re finally owed a bit of a bloody break, thanks very much, and your brain sees 7pm (or whatever time, 5pm would be idea, hohoho) as the cut-and-dry deadline for any child-related shenanigans. The other night, when Ted was still going at it with his mattress-bending at 9.15pm I ended up bellowing this is Mummy’s time now! I’m not available!

He just stared at me blankly and said, “ham?”

Ted is saying “ham” a lot at the moment. I have no idea why, other than that he really likes ham. But the more he says it, especially in answer to completely unrelated questions, the more we all laugh and the more he thinks it’s funny. He’s chatting away like the clappers, now, and if I read a story to him he copies every single word. Which is sweet, but at the same time it makes it really hard to read – it’s like having an echo that makes no sense.

In other news, Ted did something the other day that was both highly convenient and potentially disastrous, all at the same time. I knew something was up because things had gone quiet in the living room and then, when I called him, he said “coming Mama!” and arrived in the kitchen holding his (very full) nappy between forefinger and thumb. He had done a poo, carefully taken off the nappy pants and walked to the kitchen without dropping any of the poo onto the floor. To be frank, it’s almost more than I can do and I’m thirty-six years older than him. Not that I wear nappy pants, you understand. 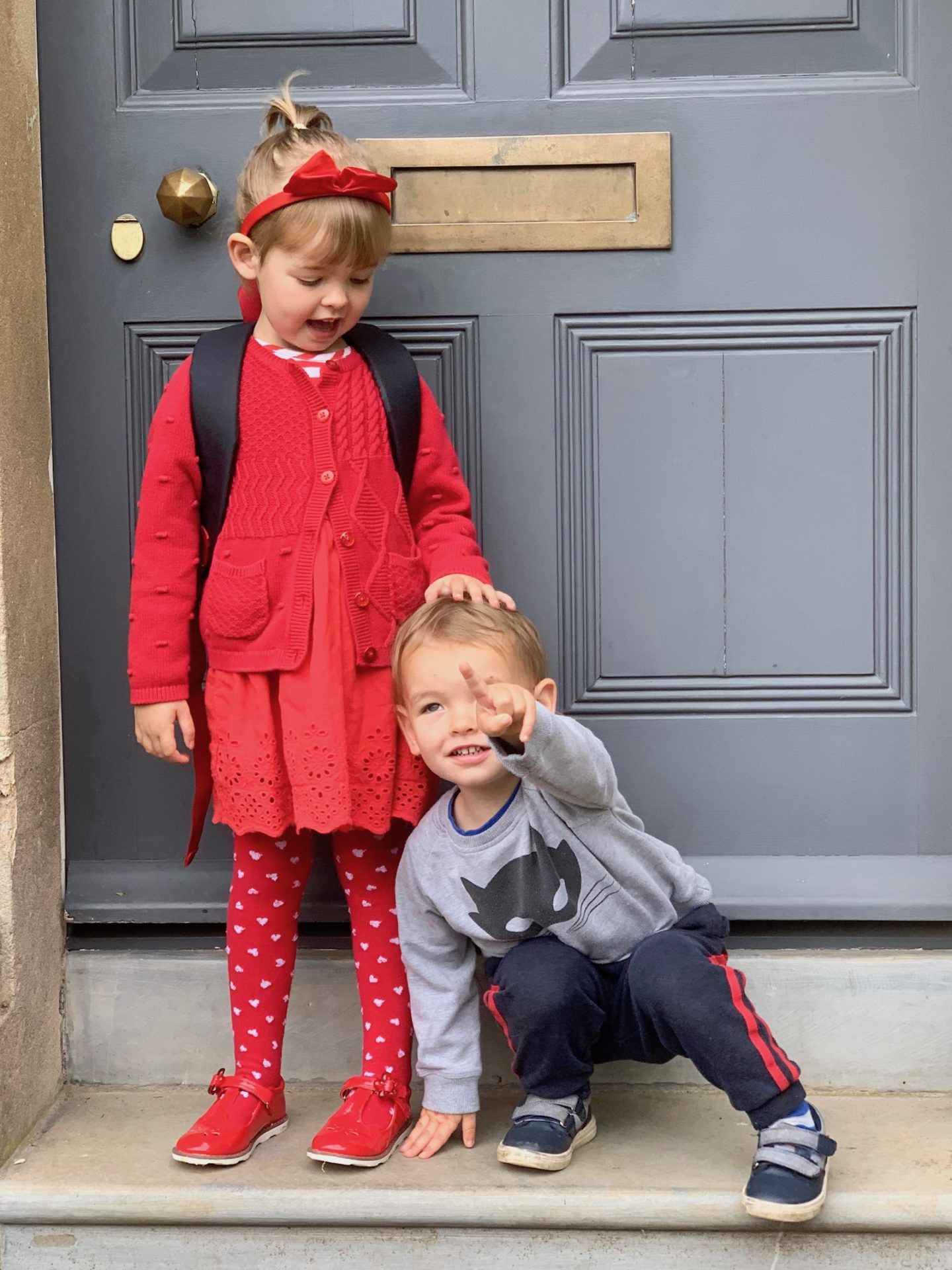 Oh God, I must dash! Angelica has had her taster morning at school and I’ve just realised that the time they’ve said to pick up is actually the time when they’ll be coming out of the gates! Not like in nursery when you just saunter in between x time and y time and everyone’s all chilled out and “here’s a painting with some twigs and dirty feathers glued to it, it’s a duck, yes that’s an acorn representing its one eye”. I have a drawer full of those paintings. Ah, such excruciatingly happy days, tinged with such anxiety that time keeps flying by too fast! Why is being a parent such a bloody emotional rollercoaster?