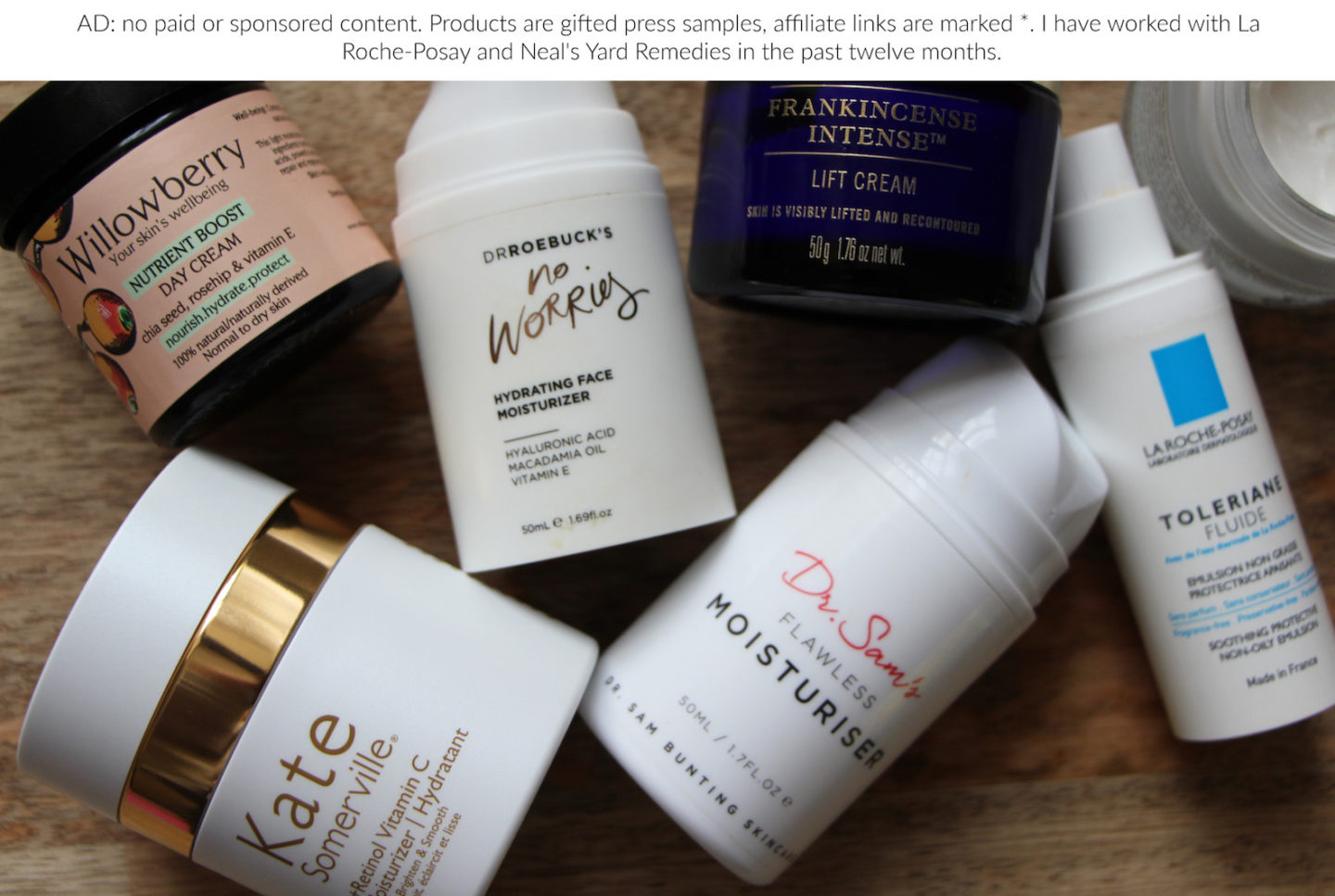 This post could also have been called My Most-Used Autumn Moisturisers but I dicked around with the title for so long that my hair grew and the leaves began to fall and so I settled on the original title. Does what it says on the tin. My Current Favourite Moisturisers.

I have around a dozen pots and tubes of moisturiser lined up next to the bathroom sink and another dozen or so stacked up on the mantelpiece but the ones below are the face creams that I have found myself using again and again. They are all highly effective at moisturising (which is what you want from a moisturiser, obviously) but apart from that they’re really quite straightforward, with no particular ingredient being championed or skin concern targeted. In other words they’re not “retinol creams” or “vitamin C creams” or moisturisers that also exfoliate, or lotions that also tackle spots. They just do a great job, primarily, of hydrating. 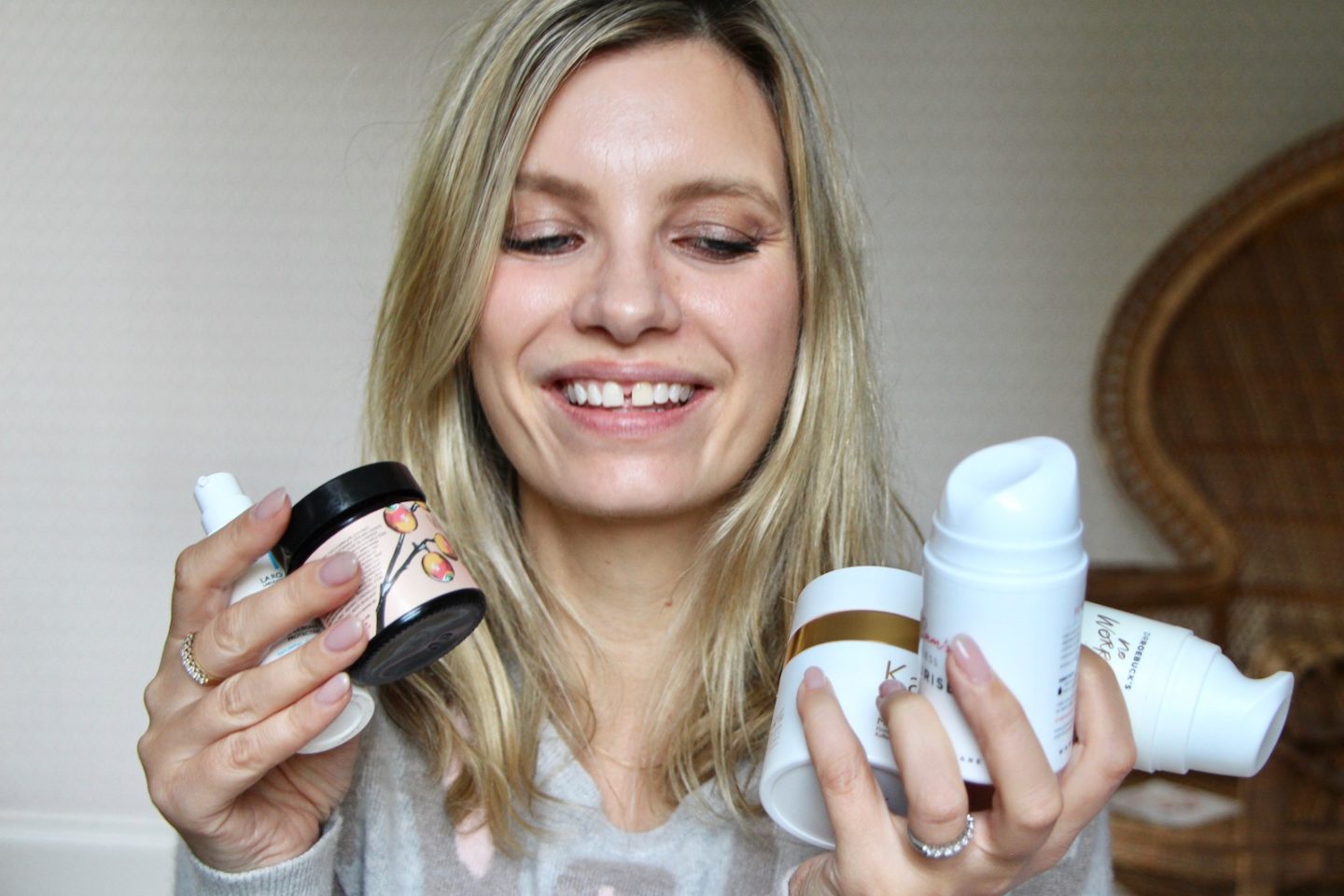 I’ve thrown in an all-singing, all-dancing, far-from-basic cream right at the end (the Kate Somerville) – and you could argue that the Frankincense one is rather jazzy – but otherwise, here’s a handful of moisturisers that you can use anywhere and at any time. Need something to buffer your retinol serum? Want a face cream that you can use day or night? Searching for something good and solid to keep your skin moist and dewy beneath your foundation/CC cream? Bob’s your Uncle.

Watch my video here for a full run-down on each of my current favourites – there’s a summary below the screen, but if you skip to that then you’ll miss my very profound thoughts on the word “pamper”, so do take a minute to press play and watch it!

La Roche-Posay’s Toleriane Fluide, £12.35 at FeelUnique*. One of the absolute best choices for skin that’s oily, or spot-prone, but also dehydrated. It is immensely soothing and skin-quenching yet oil-free and lightweight. Great as a summer moisturiser for normal/dry skin too. 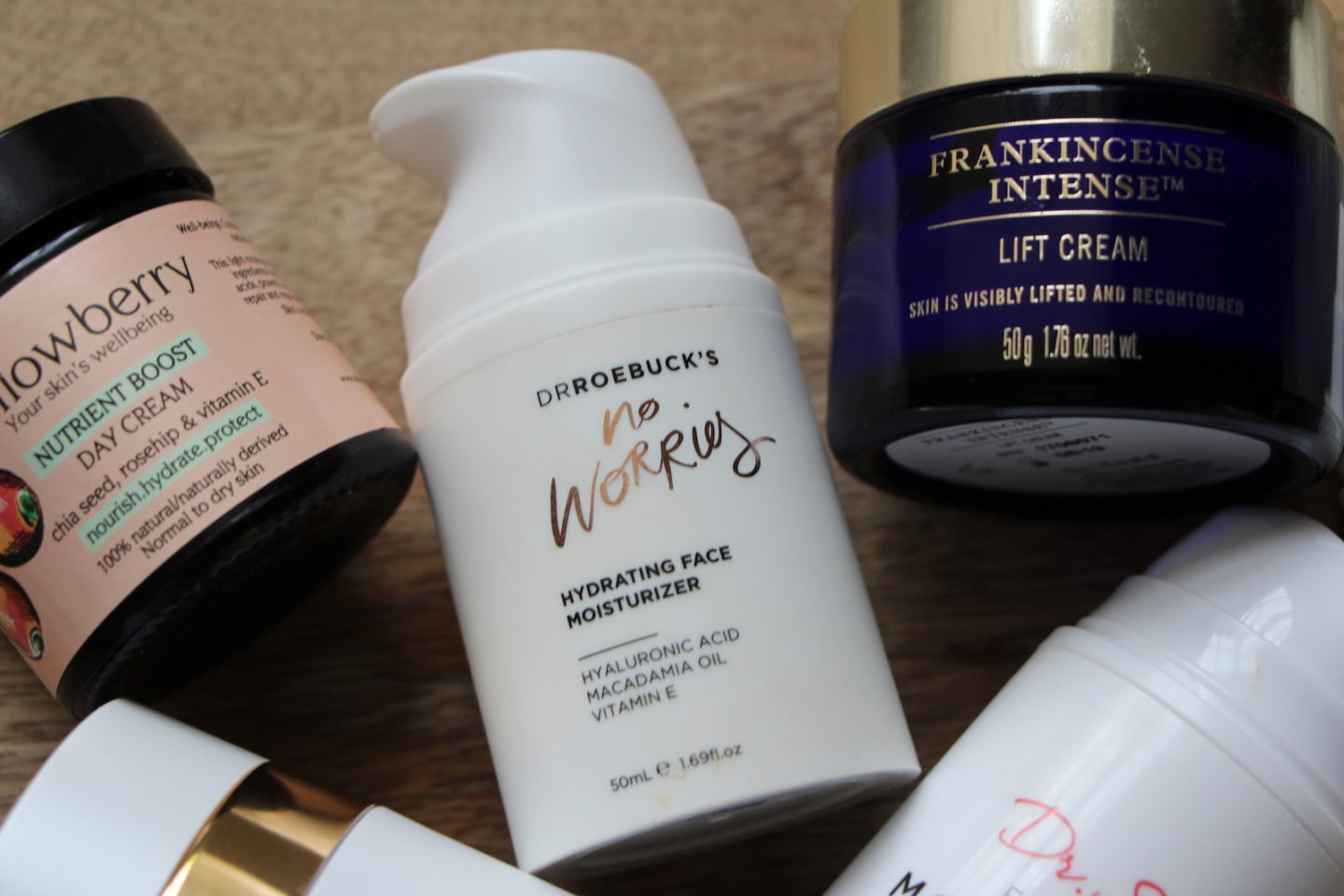 Dr Roebuck’s No Worries Moisturiser, £30 at SpaceNK*. A newish discovery, I’ve been using this rich and wonderful face cream for a couple of months and it’s an absolute gem. This packaging – air-pump bottle – is, I think, my ultimate type. I don’t have to fiddle with lids and pots and tiny screw-topped things: just one singular movement to get the cream onto my face. It really makes a difference in terms of how frequently I reach for it. (Daily.)

Dr Sam’s Flawless Moisturiser, £25 here. Same brilliant packaging as above, but a gel-cream moisturiser with a more matte finish, making it perfect as a makeup base if you don’t go in for the dewier look. 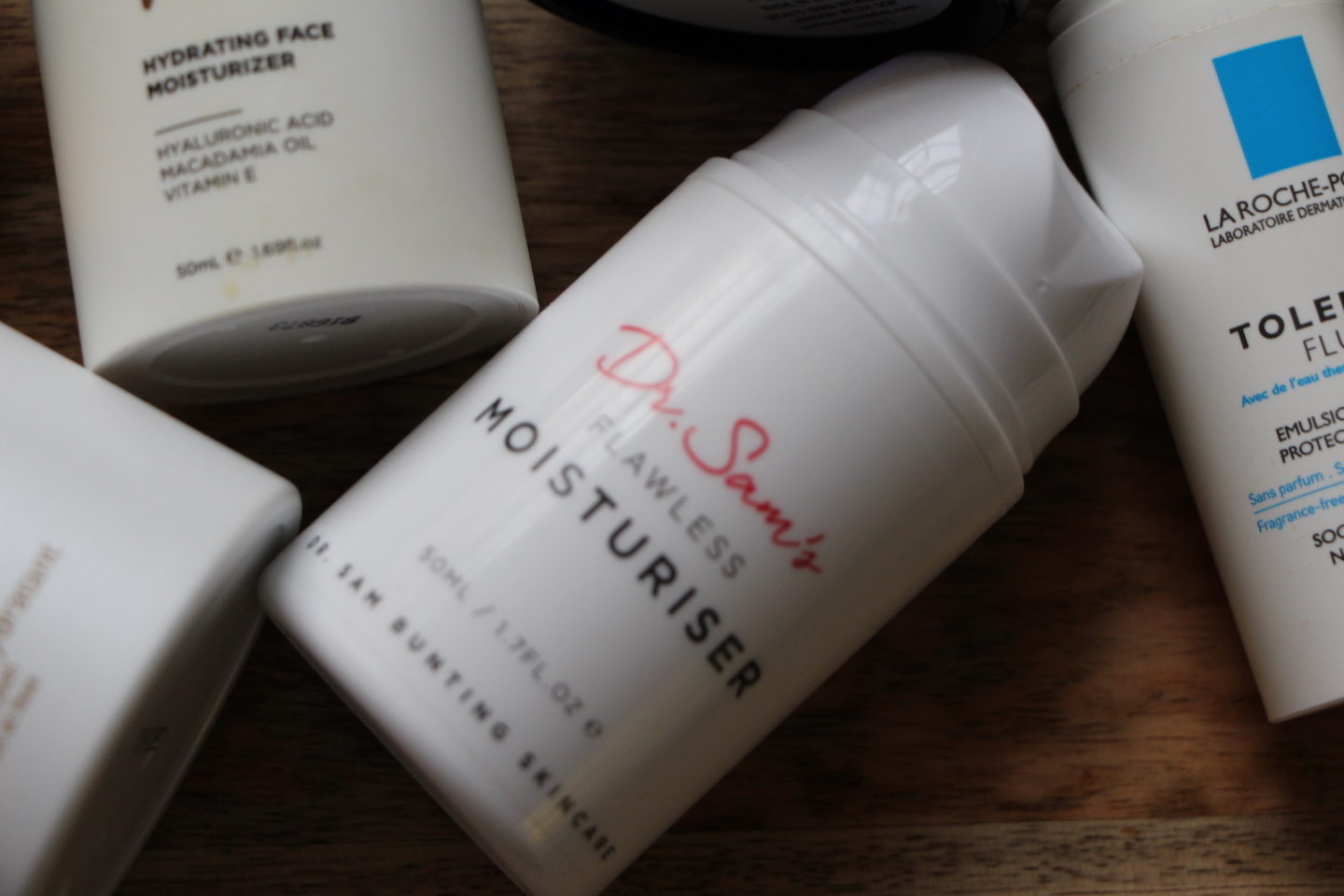 Inkey List Collagen, £8.99 from Amazon*. Not a moisturiser, but mentioned because in the video I talk about how I layer it beneath the Dr Roebuck’s – or indeed, any face cream. It’s runny like water and feels almost pointless on application but it makes a considerable difference. Not instantly, but give it a bit of time… 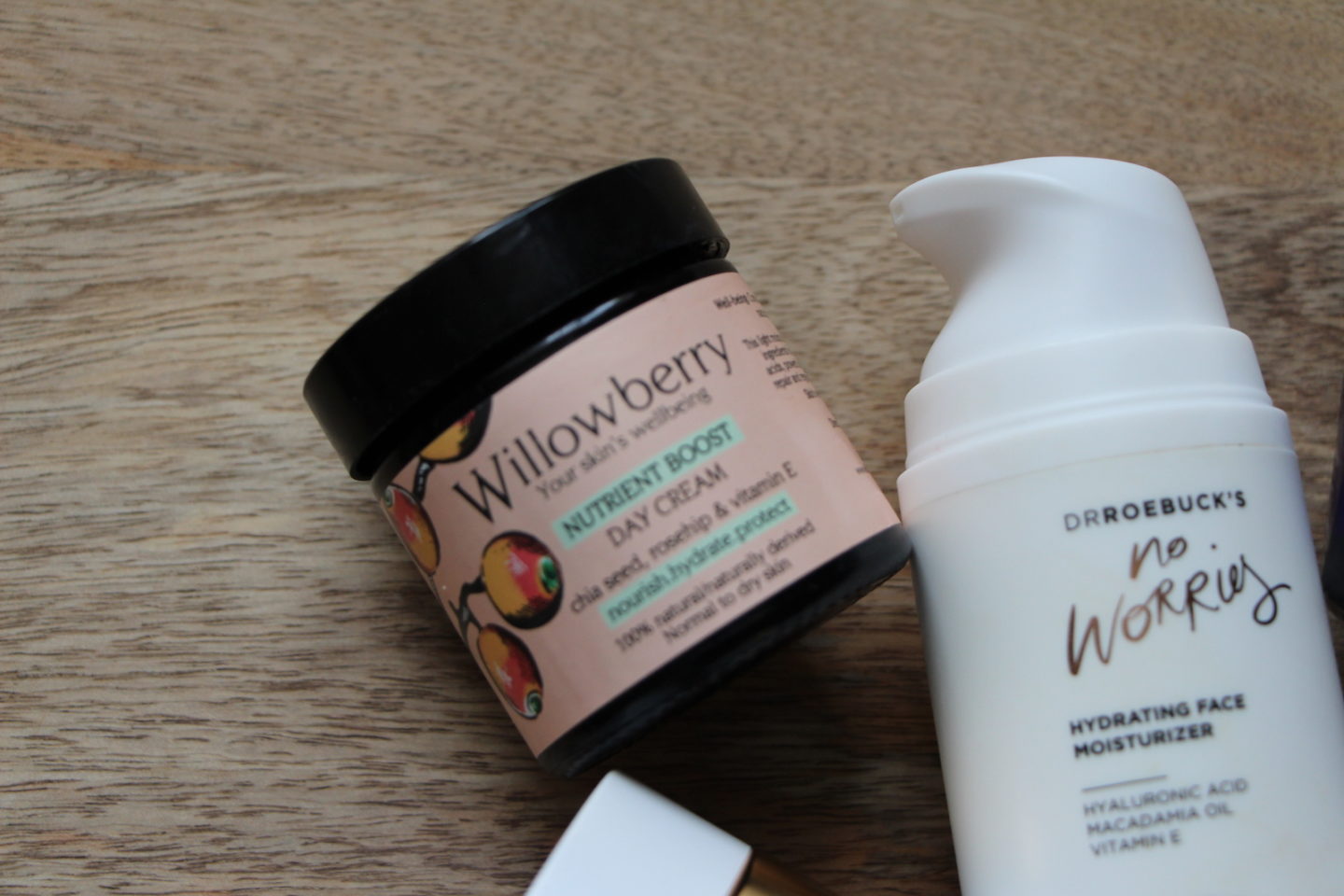 Willowberry Nutrient Boost Day Cream, £24.50 at Willowberry. I’ve had a post drafted on this cream for ages and this is my second or third pot. This moisturiser feels nourishing and gentle but doesn’t leave any greasiness -Willowberry is a small, independent brand and you can tell that a lot of thought has gone into texture and ingredient choice.

Neal’s Yard Remedies Frankincense Intense Lift Cream, £65 at NYR*. Oooph, Neal’s Yard do Frankincense like nobody else. I actually have a proper emotional reaction to the scent of their Frankincense products, which is why I’ve also noted down:

The NYR Frankincense Cream Cleanser, which is £21 at NYR*. A sumptuous cream cleanser that’s actually very good on oily skin as well as normal and dry. In fact I find it better suited to my oilier days! At any rate, it’s beautiful and the smell – again – just takes me off to other places. I can’t get enough of it. 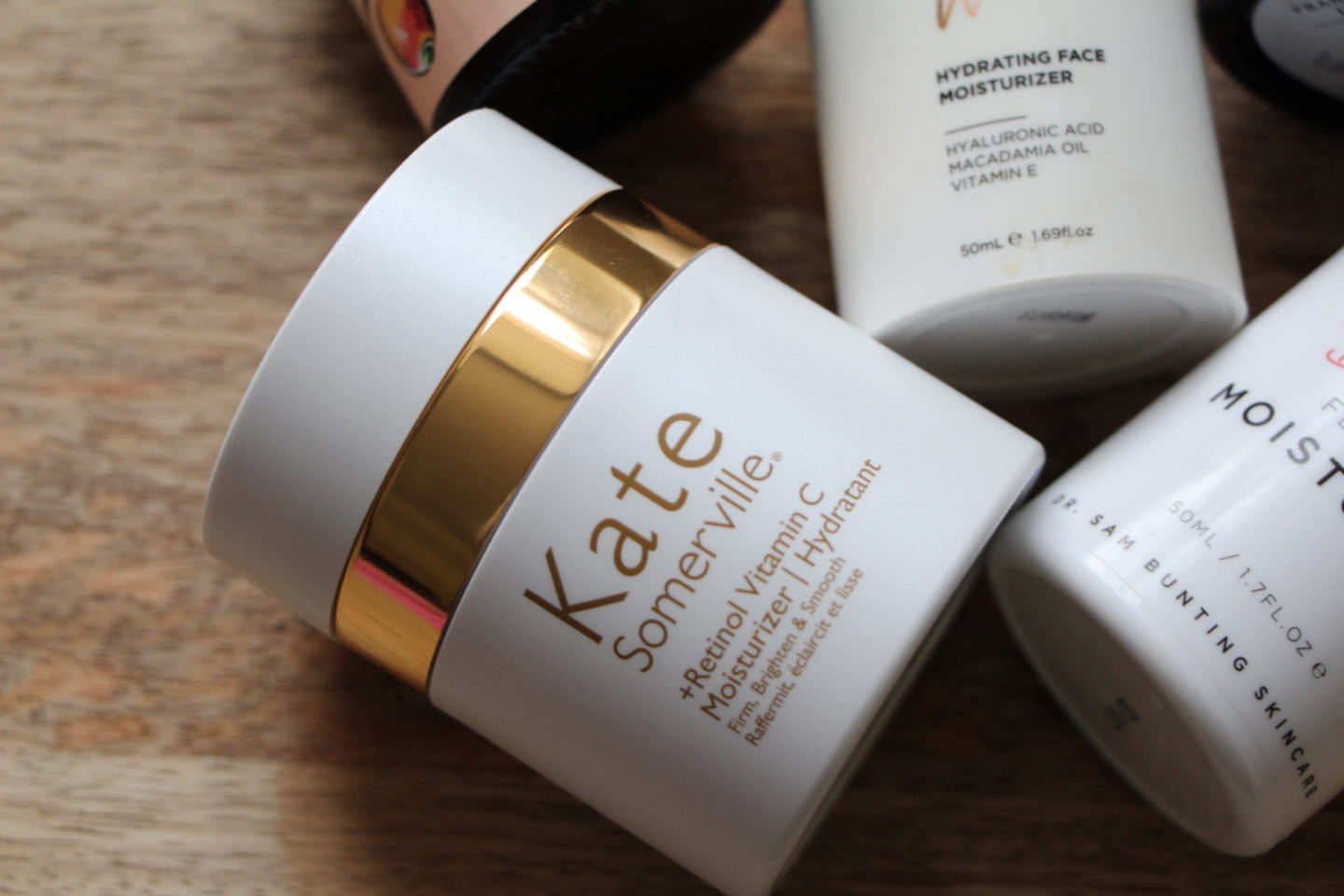 Kate Somerville Retinol Vitamin C Moisturiser, £77 at SpaceNK*. And then we have the wildcard face cream, which was thrown in to demonstrate the other end of the moisturiser “scale” more than anything. As active as moisturisers get, this one, with retinol and vitamin C and a powerful, concentrated formula. I love the serum in this range, the cream is just excellent – especially for people who can’t be arsed with loads of different layers. Cleanse, this, sleep. Can’t get much simpler than that…