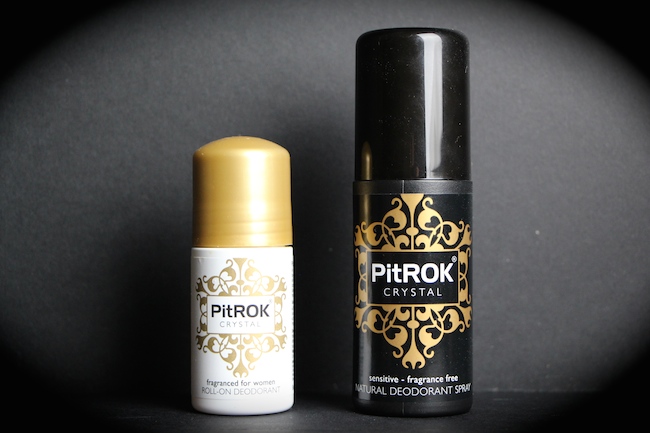 Something to note, before we embark on this little natural deodorant chat: I’m not a particularly malodorous person, in terms of armpits and sweat and so on. If I go completely au naturel on a summer’s day, hop on and off the tube and do a few sprints up and down the escalators then yes, I’ll be sweaty. But I’m not a profuse sweater. Some people get the sweats when they eat a hot curry, some people wouldn’t sweat if you locked them in a sauna for a week. Everyone’s different.  I’m not a curry sweater, but I would sweat if I was locked in a sauna. I’m a relatively light sweater. So –  just for extra clarification – if someone was going to do a national study to test out a super-strength extreme deodorant, I’d be a crap and pointless participant.

I wanted to clear that up because I have no idea how well the following deodorant will work on people of varying sweat-propensity. Do let me know in the comments if you’ve tried and have anything to add into the mix! The deodorant in question is Pitrok‘s Crystal Natural Spray Deodorant. I bought it after getting on reasonably well with the Crystal Roll-On Deodorant, made by the same brand. And I bought the roll-on because, after quite extensive internet research, it seemed to be the one that ticked all of my deodorant boxes. Which were as follows:

1) Good ingredients. I’d been reading about the perils of deodorants (and other products) containing parabens (have a read here for a very brief summary of the parabens issue), and although I’m still very much undecided about where I stand in the whole parabens debate, I’d also been reading about aluminium and how there had been concerns about its regular use in the underarm area. Now there don’t seem to be any trials that have given conclusive evidence to say that aluminium in deodorant is bad and the general gist of things seems to be that it’s not considered harmful, but in the interests of my own research and also complete peace of mind, I thought that I’d search out “clean” deodorants that didn’t contain the above.

2) Easy to use. ie: you can just spray or roll the thing on, and you don’t have to unwrap a special crystal from a velvet pouch and apply it only between the hours of 2 and 4pm. I wanted the deodorant to be as near to the traditional idea of deodorant application as possible.

3) Inexpensive – or at least not prohibitively expensive. You can pick up a deodorant for less than a quid in the supermarket (30p at Tesco!) and so I didn’t want to be championing products that were much more than three or four quid.

4) Effective. Because what’s the point in a deodorant that absolutely does not work? I tried one “natural” deodorant and it actually smelt of BO before I’d even applied it to my skin! Useless.

I bought about five or six different deodorants, but it was the Pitrok roll-on that stood the test of time. It kept me dry and fresh all day long, was free from aluminium and parabens and had a really gentle, soothing formula. No stinging, even applying it straight after shaving. (Surely the acid test when it comes to deodorant gentleness?!) The only thing that I didn’t like about it was that the ball dried up quite quickly and I had to keep coaxing it back into action, but really a very small niggle.

Though I suppose enough of a niggle to make me want to look for an alternative in the same brand, which was why I then went for the Crystal Natural Spray version. Love it. I think it actually works even better than the roll-on; the same soothing formula, no alcohol or perfume added, and an easy-to-use non-aerosol spray. It says on the instructions that it takes about a minute to dry, but I find that it’s far less than that. And I haven’t had any problems with white stains, so far, though I do make sure that my underarms are completely dry before dressing. Mind you, I’d imagine the risk of white stains would be far less if there are no aluminium salts included in the formula…

Important observation: this deodorant is designed to be applied to clean skin. For many, this may go without saying, but, y’know. Sometimes you have to emergency apply and a shower isn’t possible. If so, then Pitrok isn’t the best option – it works by stopping the growth of the underarm bacteria that cause odour, so if they are already there and a-growing, well. It would be kind of like shutting the barn door after the horse had bolted, crying over spilt milk, etc. Pitrok isn’t an odour-disguiser, it’s an odour-preventer. Which is, in all honesty, the best kind of odour-anything.

But overall it’s a definite winner, this discovery. Let me know if you’ve tried it and how you got on – you can find Pitrok for £4.05 at Boots.com.