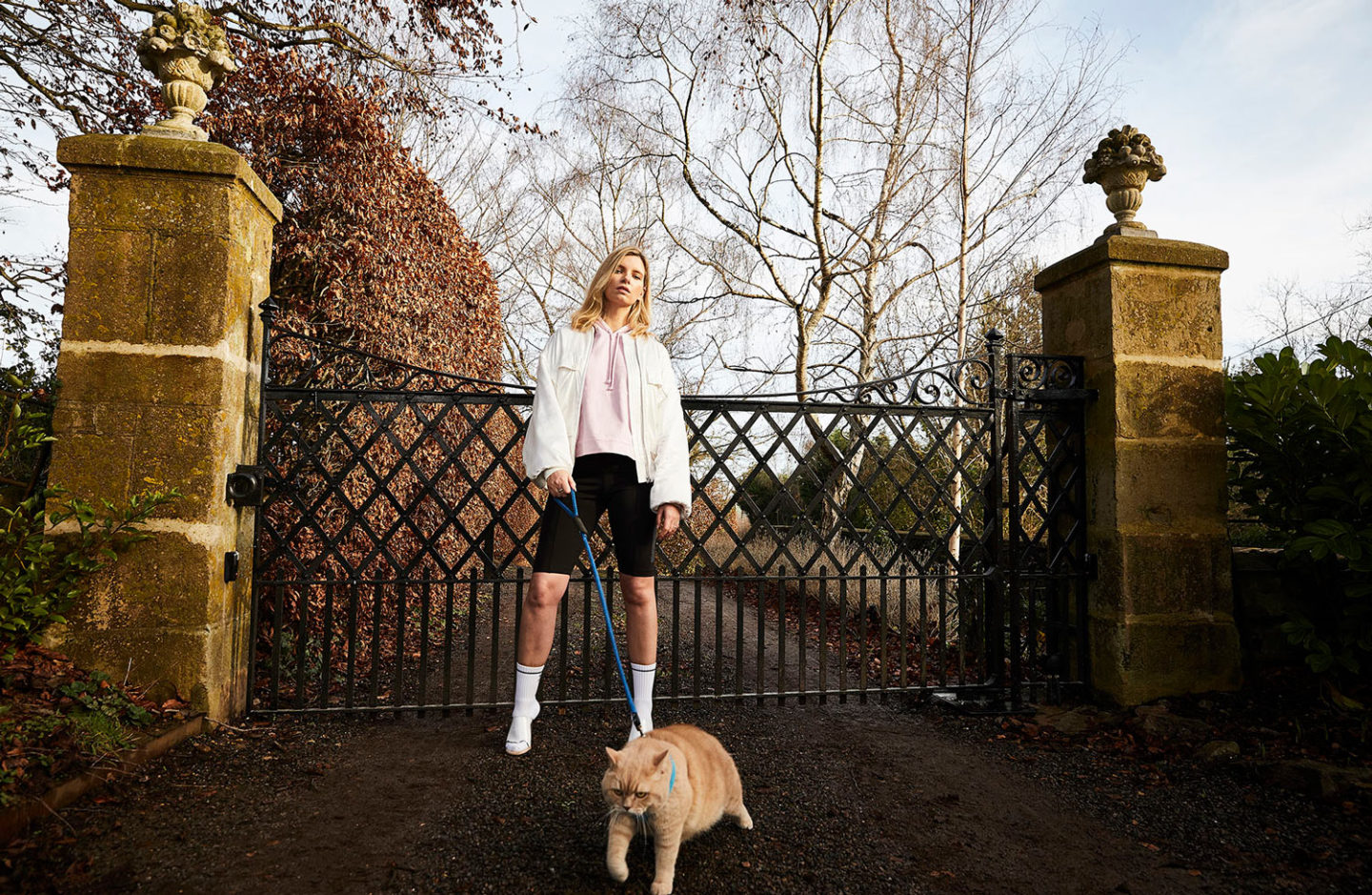 The phoenix has landed, the cat is on the lead, the dog is at the dinner table and the chicken is a cover star. Sounds like a slightly odd lesson from one of those secondary school French listening tapes (ecoutez et repetez!) but it is, in fact, my latest magazine shoot.

We went quite off piste with the whole idea behind this fashion shoot for Phoenix magazine; what began as a sort of satirical commentary on country living, via clothing trends, became a quite bonkers story about my home life and various animals. I mean I even cuddled a chicken, for crying out loud. I hate chickens and their bony, weird claws and their wings that feel all fragile and flappy and panicked.

I hope you appreciate the things I do for my art, in inverted commas. 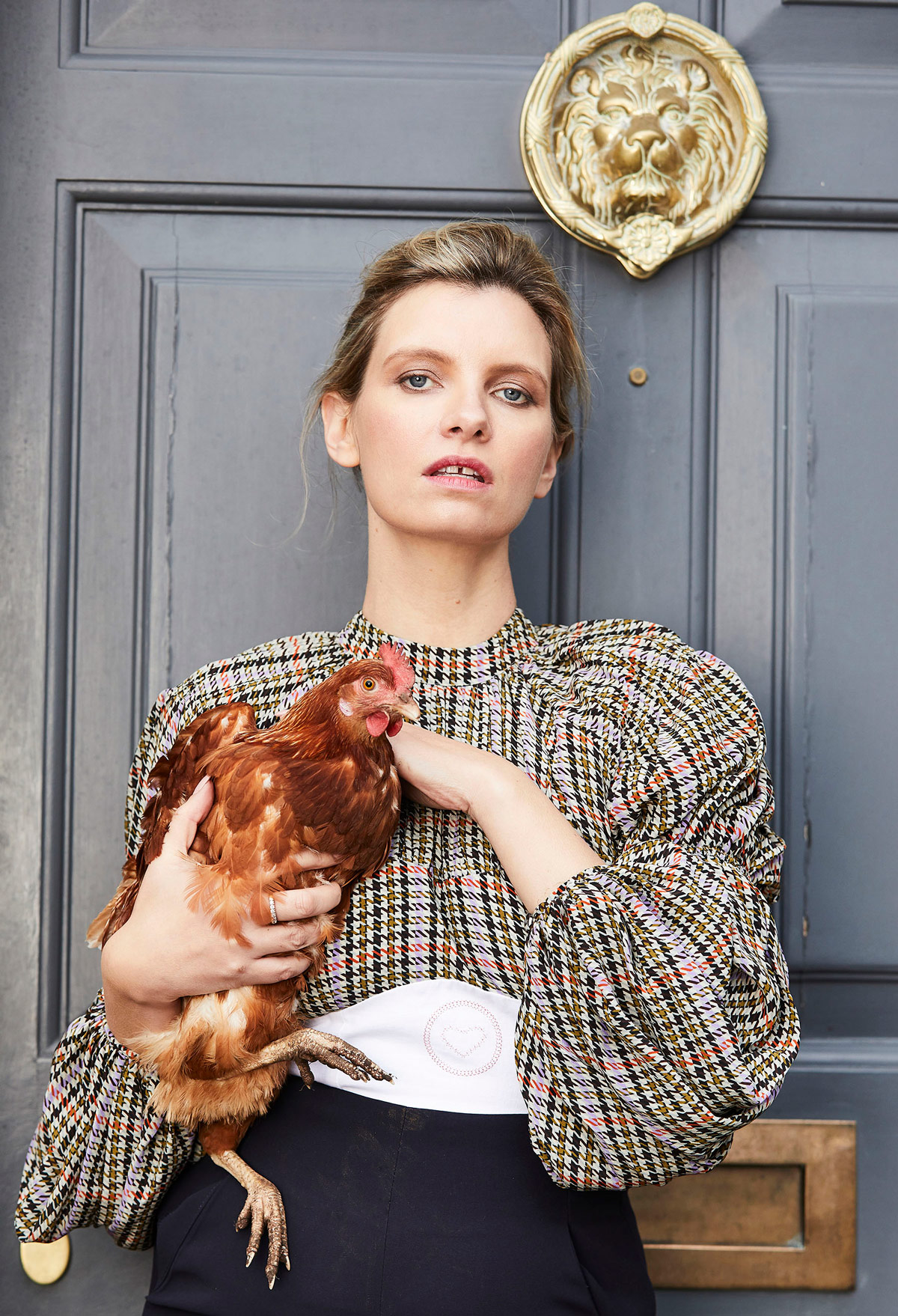 You can see the full editorial with photoshoot at Phoenix here – there’s such a kind and detailed interview inside. The only thing is: the lovely people at Phoenix have been very organised and punctual with their content but I have not. So there’s a bit of a surprise for any of you who read the magazine before you read what I’m about to say…

…because the cat is out of the bag and the project I’ve been working on for almost two years has been revealed. The Night Feed. The Night Feed is an app designed for new mums (or not-so-new mums) who are up in the middle of the night feeding and comforting babies or just trying to get them to GO BACK TO BLOODY SLEEP! There’s nothing lonelier than being awake for the night feed and being completely by yourself; unable to text anyone because they’re all in bed, unable to watch the TV because you’ll wake the baby up… For me, it was one of the hardest things about being a new mum and by the time I was going through it with my second baby, Ted, I decided that enough was enough: there had to be somewhere I could go at night to feel less lonely and pass the time in a useful and pleasant way. And it didn’t exist, so I decided to create it myself.

The Night Feed is (if I may say so myself) pretty amazing and I hope that everyone will want to take a look, not just new mums or mums with older babies that won’t sleep. It’s a constantly updated feed of content (blog posts, reviews, diary entries) as well as a place where people can easily connect with one another via messaging and discussion threads. Think of it as a warm, welcoming members’ club where you can join in as much or as little as you want – stop on by and read a newspaper (the feed posts and reviews – keep up with this analogy, it’s a good one) or pull up an armchair and chat to like-minded people whilst you eat biscuits.

If you’re awake at night and feeling frustrated and bored then I hope that this is the place you’ll feel an inexplicable pull towards – like a warm light shining out into the dark, I want it to reel you in, draw you to it like moths to a flame. And for those who like a purely practical app there’s a baby feed timer with painstakingly thought-out, clever features as well as my self-created selection of the best white noise sleep sounds. (I still use a sleep sounds app and Ted is two; it’ll be worth downloading the app for this alone!)

Of course the content is not completely baby-centric (we don’t all want to lose our minds) and the app is for anyone who wants to use it, male or female, parent or non-parent. And obviously you don’t just have to use it at night – the content will be there 24/7, the night will just be when the fun stuff happens. Because it’s about time there was an upside to being woken up every three hours. Apart from the cute baby aspect. And the fact you can eat choc chip Tracker bars at 3am and not feel too guilty.

Now look, the app isn’t quite ready yet – it’s in its final build stages – but I will be needing a few people to test it pre-launch, so please do comment below if you’d be up for it. I need thorough testing and honest feedback because once it goes out into the cold dark night, there’s no going back! It’s already being tested to the nth degree, but I always trust you lot to tell me what’s what and so I’d be eternally grateful…

I will update you as soon as we are go-go-go with The Night Feed; I’m so excited. This is the biggest project I’ve ever done on my own and it has been such a learning curve, I can’t wait to show you the finished product!

But back to chicken-cuddling and dogs-at-tables: click here for my wonderful story with Phoenix. Photography by Richard Grassie (richardgrassie.com), styling by Charlotte Holt (here) and hair and makeup by Lisa Caldognetto (here).